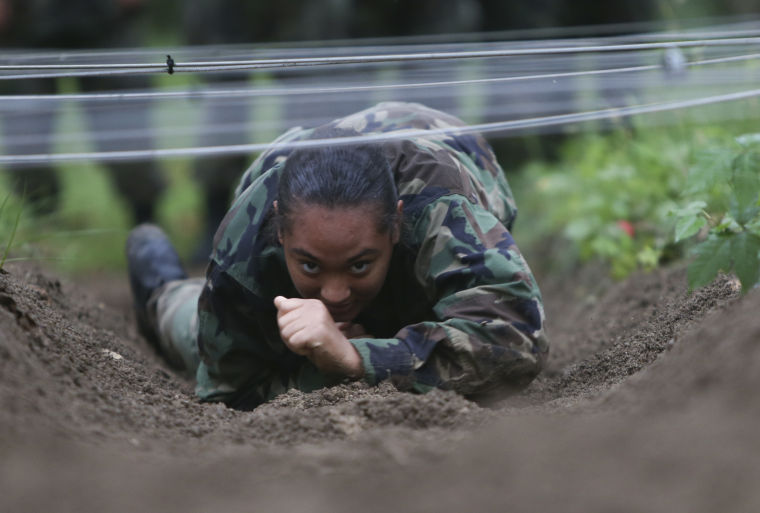 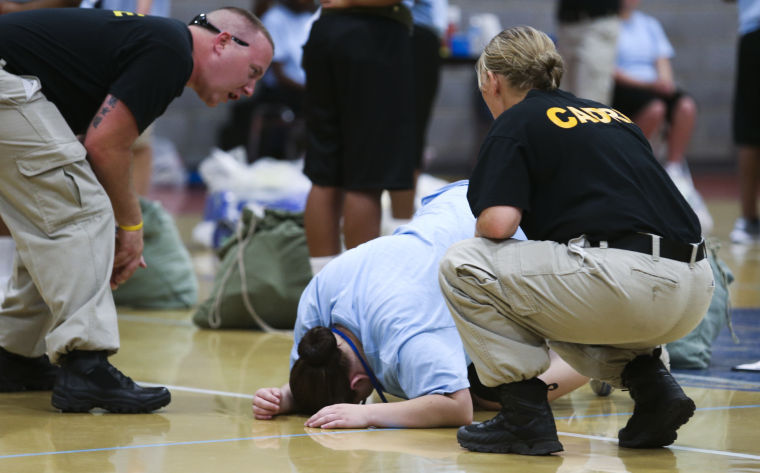 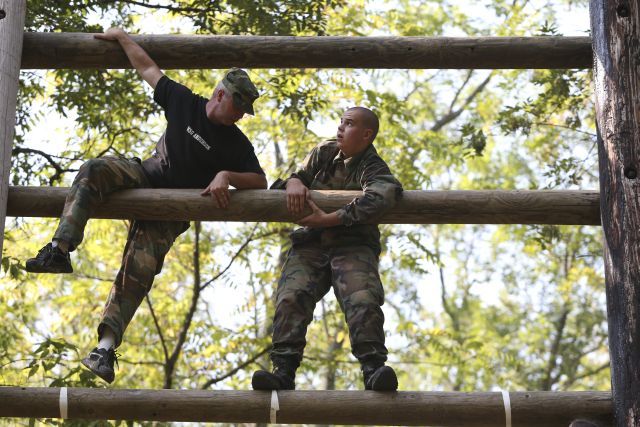 Master Sgt. Mark Anderson tries to calm cadet Cody Moulder who was having trouble with the height on an obstacle on the challenge course at Camp Atterbury, near Edinburgh, Ind. 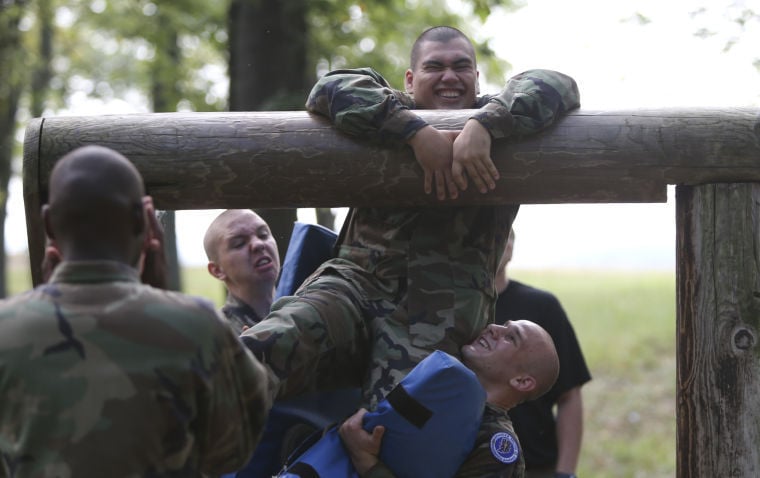 Cadet Julio Rodriguez gets help from other cadets as he tries to get over an obstacle on the challenge course at Camp Atterbury, near Edinburgh, Ind. -AP Photo/The Indianapolis Star, Mike Fender

Master Sgt. Mark Anderson tries to calm cadet Cody Moulder who was having trouble with the height on an obstacle on the challenge course at Camp Atterbury, near Edinburgh, Ind.

Cadet Julio Rodriguez gets help from other cadets as he tries to get over an obstacle on the challenge course at Camp Atterbury, near Edinburgh, Ind. -AP Photo/The Indianapolis Star, Mike Fender

KNIGHTSTOWN, Ind. — Karina Bowling showed only a hint of a smile — and she was in trouble.

Karina had already been kicked out of school. She was on a life course headed for jail. But this time, it was different.

Two military-style drill sergeants, called cadre, were in her face, shouting, furious, arms flailing, voices piercing because she had dared to smile. They were so close “they were spitting in my face,” Karina told The Indianapolis Star.

Karina, 16 at the time, struggled to hold back tears.

“You want to act like an 8-year-old?” cadre Sgt. 1st Class Doug Tompkins screamed. “You want to throw a temper tantrum? You want to boo hoo hoo? Well, no one is listening.”

When the cadre moved on, a tear slid down Karina’s cheek.

That was her introduction to the National Guard’s Hoosier ChalleNGe Academy, which she entered at her mother’s urging.

Housed in the former Knightstown Soldiers and Sailors Children’s Home in Rush County, the academy is in its eighth year as an intervention program for high school dropouts ages 16 to 18.

It teaches physical fitness, academics and job and life skills in a setting that feels like a military boot camp.

Karina’s mother, Sheri Bowling, turned to the academy when she realized her daughter wasn’t listening to her advice.

“Sometimes you have to seek outsiders to get your point across, to teach a lesson,” she said. “To me it was the best gift I could give my child. Now she has a fighting chance, she has that inner peace, she’s a success.”

Karina, too, felt she needed a second chance. She had been kicked out of Eastern Hancock High School for “doing things I had no business doing,” she said. “I needed a change.”

She entered the academy earlier this year with 95 other students in Class 14. Lugging a bag of personal hygiene products, she hugged her mother and said goodbye, prepared for a five-and-a-half-month stay. The youths come from across Indiana, big cities and small towns. They are white, Black, Hispanic, male and female.

The first night Karina and the other recruits read letters from their parents and family before bunking down in a military-style barracks. They had already been issued fatigues and their hair had been cut. Despite their tough exteriors, many of the recruits had tears dripping off their cheeks.

“It was really scary the first night, I wasn’t even able to sleep,” Karina said. “I was so scared I couldn’t sleep.”

Most classes start with about 100 recruits and end with close to 80 cadets. That’s frustrating for Bethany Williams, director of the academy and a former Marion County juvenile court public defender: There’s room for many more. “That troubles me,” Williams said. “Because I know there is easily another hundred kids in the state of Indiana who would benefit from coming here, another hundred kids who are poised on the brink of making some bad decisions who could be helped by this program.”

The program is voluntary; the teens can call their parents and leave at any time. But many stay because this is their last hope, their last chance at finding a way to get their lives on track.

Rivera Manship, 18, of Richmond, entered the program earlier this year, out of other options. He was a senior with four credits and spent every dollar he could get on drugs, he said.

“I had nothing going for me,” he said. “It was either come here or get kicked out of my house.” His story is a common one among youths in the program.

Members of the cadre, the ones doing most of the yelling, are the ones who get most of the credit when it comes to shaping the cadets. During the first two weeks, they are hated during the “breaking down” period. They slowly build the youths back up with respect and reward.

The building back is a slow process. The cadre turn the tables and start reinforcing good behavior. “The kids have to learn to do it our way,” says 1st Sgt. Abbey Smith, who supervises the cadre.

The cadets spend time in the classroom, on obstacle courses and plenty of time in physical training. “By the time they reach graduation they have earned the right to make decisions,” Smith said. “Through the 22-week process they learn basically how to relive their lives.” — (AP)

Karina, the girl shouted down for smiling that first night, earned a scholarship and “most-improved cadet” honors in a cap-and-gown ceremony this summer.

“I didn’t go back to the ones I was getting into trouble with,” she said. And so far she says she still has her life on track.

Sgt. Cole Davis knows what it’s like to be on the receiving end of the screaming. Now one of the cadre, he once was a cadet looking for a second chance.

Davis, of Indianapolis, was 19 and a senior in high school when he was evicted from a house he was sharing with a couple of friends.

“I was on drugs, I was dealing and doing dumb stuff,” he said. At night he slept in his truck.

He learned about the academy on the day he was dropping out of school and picking up a copy of his transcripts. A brochure caught his eye: free room and board, free GED and a military reference.

“That was enough for me,” he said.

Davis graduated, enlisted in the military and now works with kids he feels he understands.

“This place saved my life,” he said, “and I want to partake in saving other people’s lives.”

And if it takes a little screaming, Davis is OK with that. -