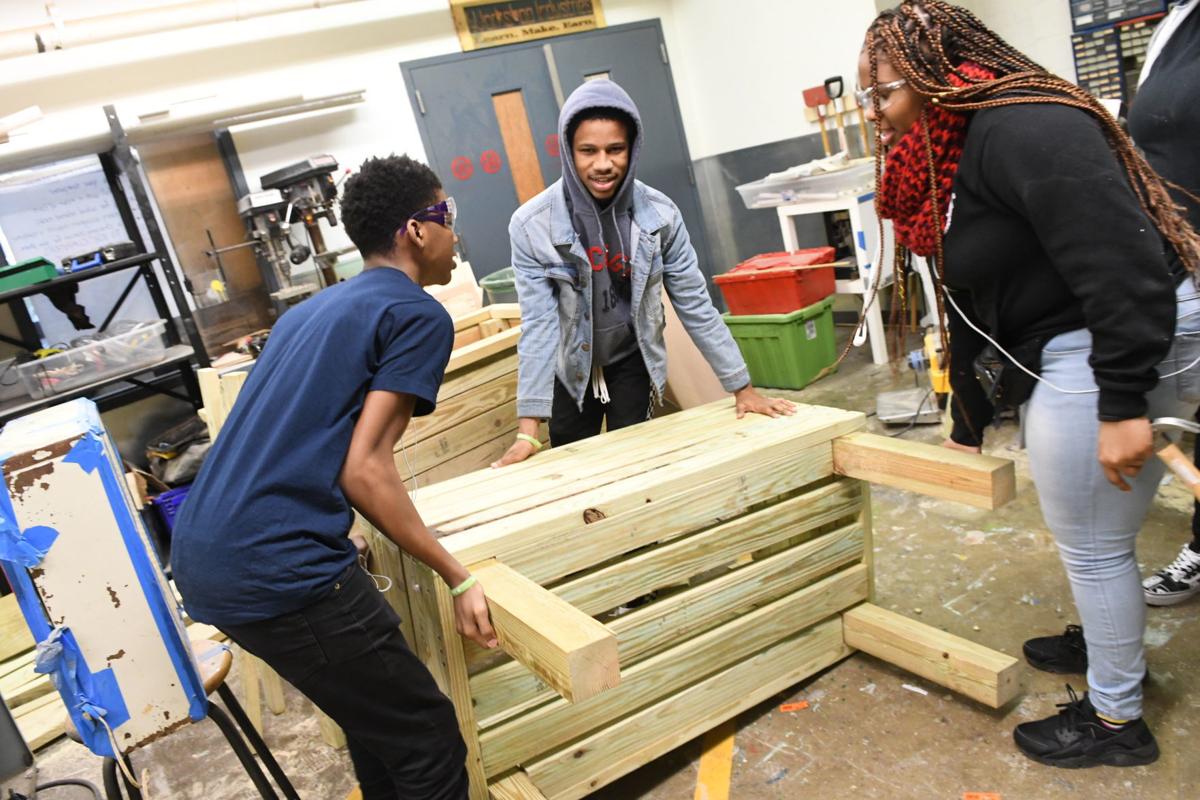 Students get ready to move a planter box. 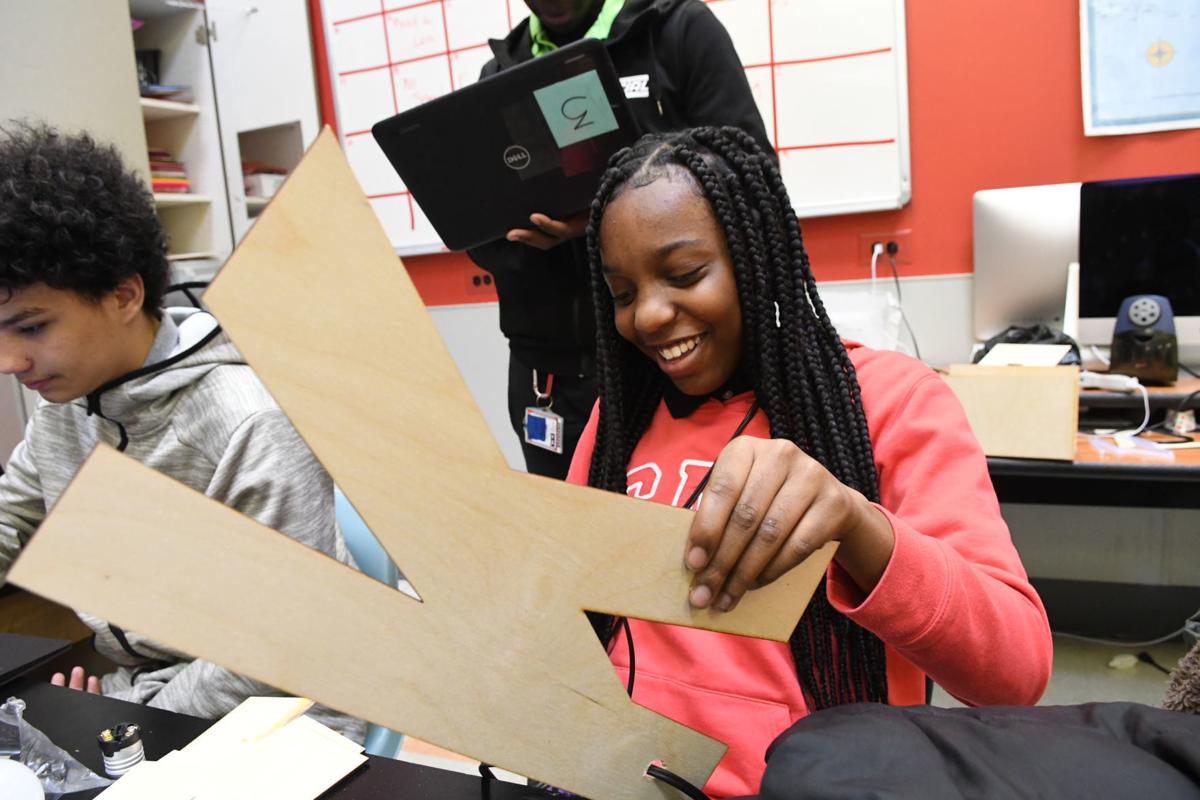 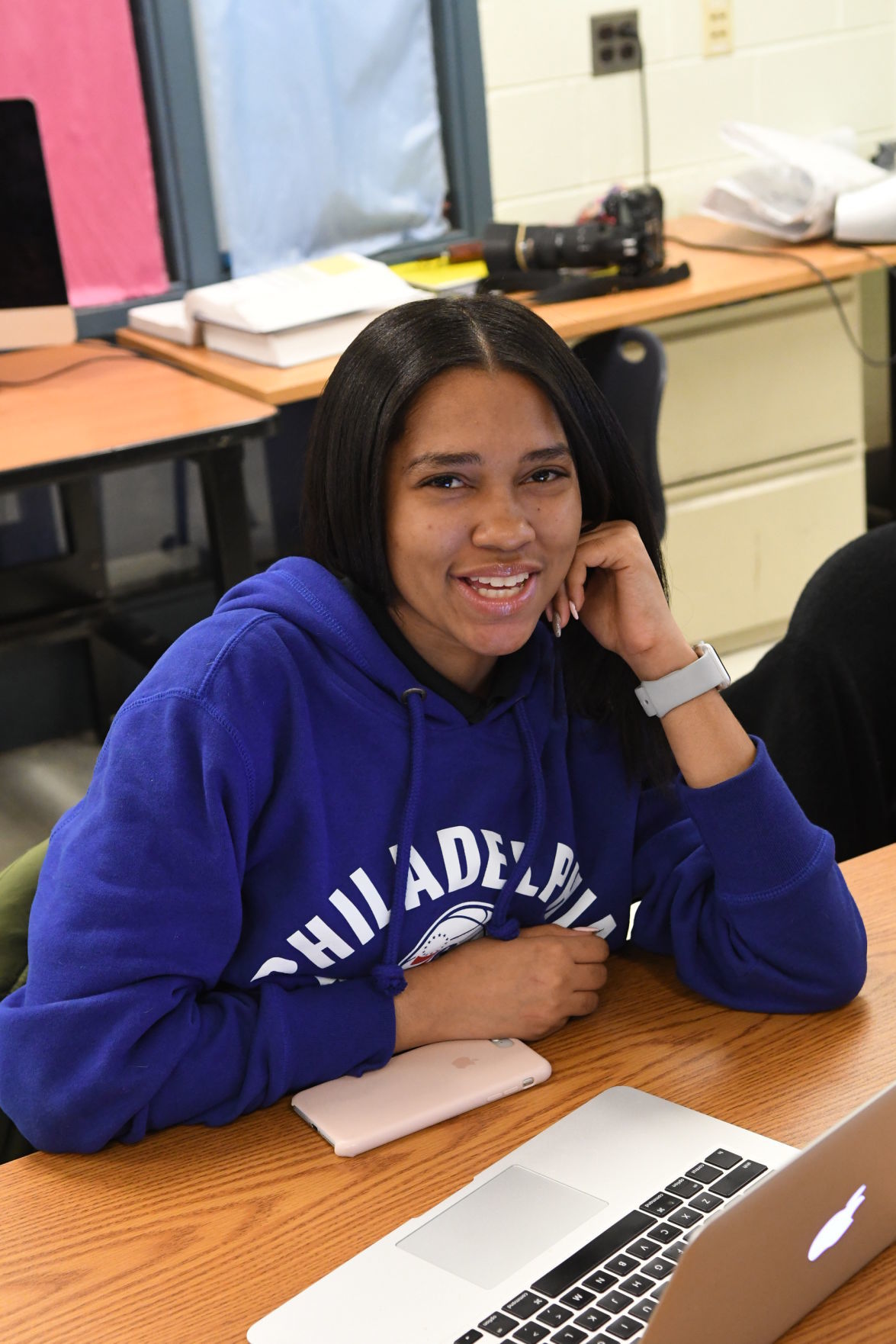 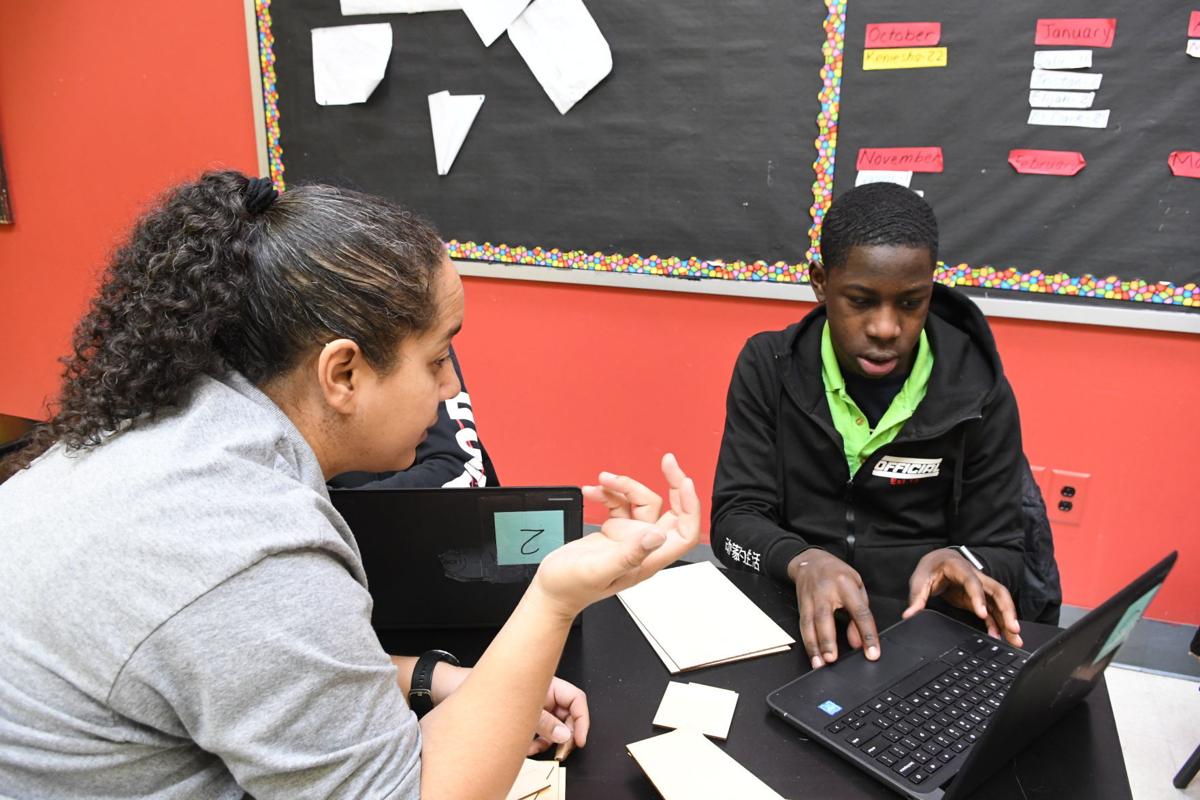 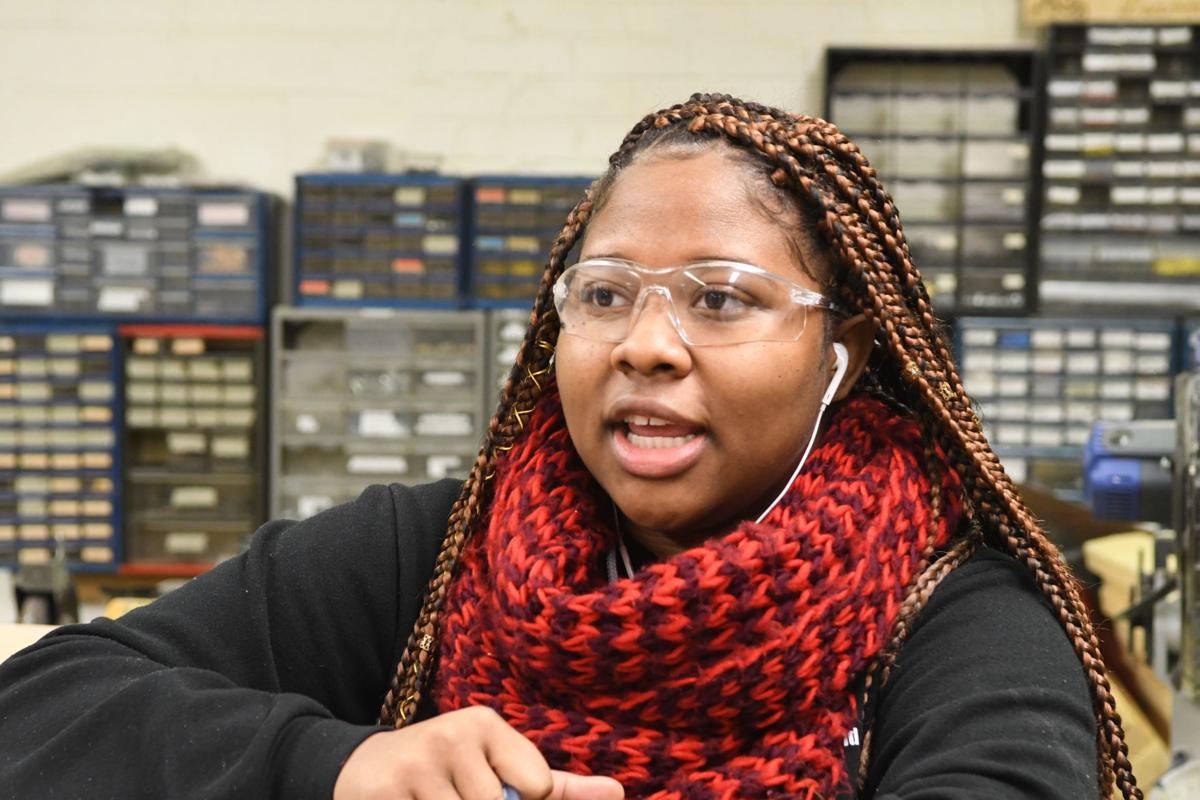 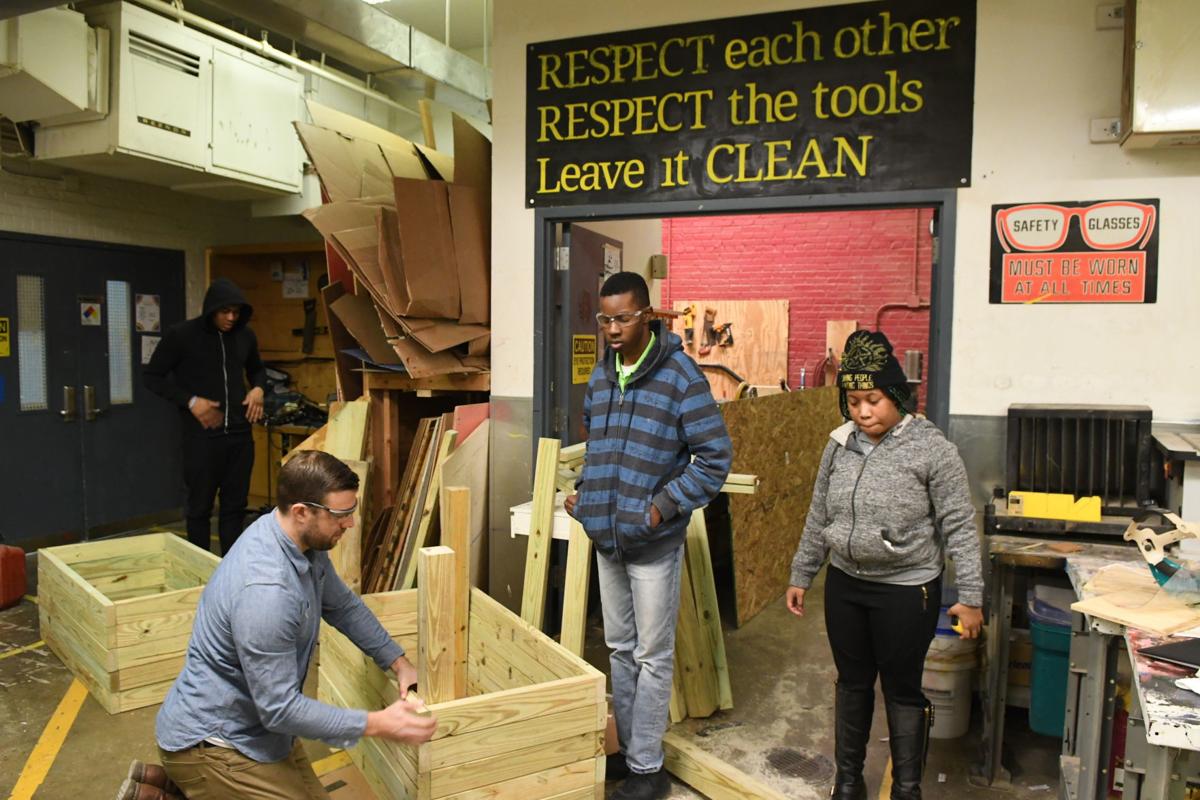 Adviser and special educator Jared Lauterbach works with students on a planter box in shop class.

Students get ready to move a planter box.

Adviser and special educator Jared Lauterbach works with students on a planter box in shop class.

The Workshop School is raising the bar in how education is taught in schools. The Workshop School, at 221 Hanson St., is a small project-based high school in West Philadelphia. The school’s mission is to unleash the creative and intellectual potential of young people to solve the world’s toughest problems.

“This is my first year at The Workshop School and one of the things I like about the school is the projects,” said freshman Malaha Camara. “The teachers and staff are also nice and very supportive.”

The school uses the concept of real world problems for their curriculum, and evaluates students’ work based on the progress they make in defining, exploring and ultimately developing solutions to those problems.

Project work is also a core component of the school’s academic model. The projects often address a problem that is important to both the student and to society, and they must result in work that can be evaluated using real-world standards.

“In 2013, we started The Workshop School,” said principal and one of the co-founders of the Workshop School Simon Hauger. “We wanted to create a school that honored the different type of learning styles. A lot of people learn through experiences and by doing different things. We think that that’s a very powerful learning experience especially if you’re more of a hands on learner.

“We have numerous projects throughout the year,” he added. “The sophomores are working on a mass incarceration project; studying the history of mass incarceration in this country and the social issues around that. We have a good balance between hands on projects and more academic researching projects. I’m really proud of the work the students do.”

Since its inception, The Workshop School has had several highlights including going to the White House during the tenure of Barack Obama’s presidency to launch a program called Cars from the Heart that allows students to hone their automotive skills while helping others.

As part of the program, students fix up cars bought at a low cost or received as donations, and in turn donate those cars to graduates of Youthbuild Philly who need transportation to secure employment in construction and other jobs for which they have been trained. On the ground floor of the school, students work in three large automotive shops, designing and building hybrid cars.

“For us, It’s all about helping our students find their passion and talents and helping them master those skills in the areas of their choice during their high school experience while also preparing them for their future,” Hauger said. “I also think it’s important to have a school that lets its students know that you’re important, we value you, you have gifts and talents and the world needs. We want to help our students develop their talents.”

While students get traditional math and English instruction in the afternoon, mornings consist of two 90-minute project blocks in which students learn multiple skills at once.

“We’re working with the Enterprise Center and we’re building 10 custom planter boxes that students designed for the 52nd Street corridor,” Lauterbach said. “The students created a design aesthetic and then each student did an architectural drawing. They also did a budget and then they did a presentation with a slide show which they presented to the Enterprise Center. The winning design won and now the students are in production mode.

“The beauty of students working in the shop is that in addition to putting something together from start to finish, they’re also learning skills that they will use in everyday life,” he added. “When things don’t line up correctly in shop they have to figure out a way to fix the problem. That is how it is in real life. They’re also learning how to collaborate with others, budget money, and how to present themselves to an outside audience through public speaking.”

Senior Krista Frasier design was chosen for the 52nd Street project. Krista said since she was already familiar with the area that helped her with the designing process.

“I’m from West Philadelphia, so I was already familiar with the area,” Krista said. “The old flower planters they had in that area people would either sit on them or throw their trash in it. For my design, I made sure to make the flower planters bigger and deeper so that people can’t sit on them and throw their trash in it. The design will also include the 52nd and Market Street sign, so people will get a sense of home and appreciate it more.”

In Katrina Clark’s class, students are working on two projects: writing culturally relevant children books and making their own lamp from scratch.

“There are not a lot of children books that have diversity in them or take on issues in the urban environment,” Clark said. “With the book project, students chose a book called “Truly Relevant” to read to first-graders at the Henry C. Lea Elementary School. They also interviewed the students on what they want to see in a book. Our students are now writing their own stories and once they’re done they will go back to Lea to read their own story to the students.

“The other project is based around electricity,” she added. “The students created a crude lamp that had a switch to light bulbs on it. They had to wire it and parallel it, which is another way to rewire a lamp at home. The students recently created their own prototypes to make their own lamp from scratch. One of the cool things about this class is I’m taking away the same things that they are which is when confronted with any problem in the world you have the resources to actually solve that problem.”

Learning is a community effort at Morrison

When Meredith Lowe became the new principal of the Andrew J. Morrison School at 5100 N. 3rd St. in July 2018, one of the things she did right …