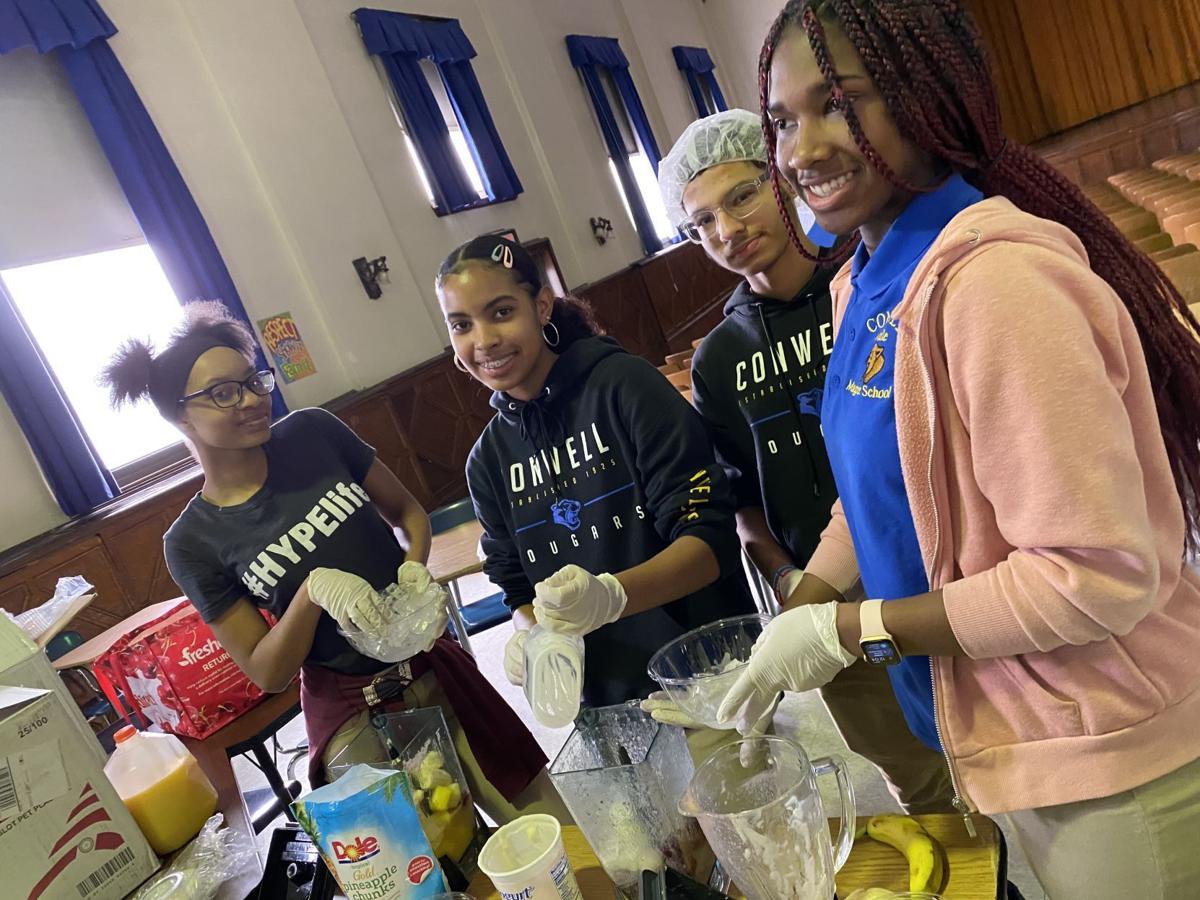 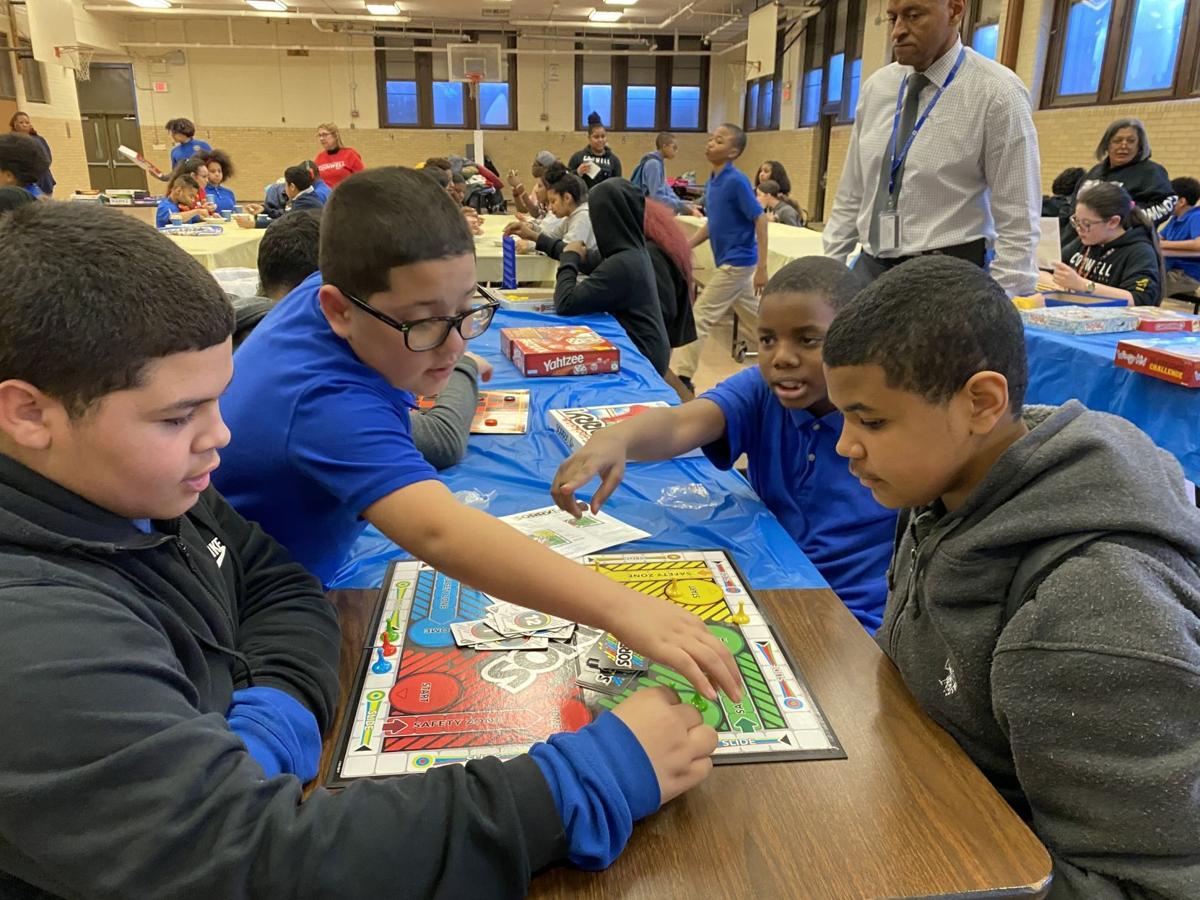 Students come together to play various board games, including Sorry and Yahtzee. 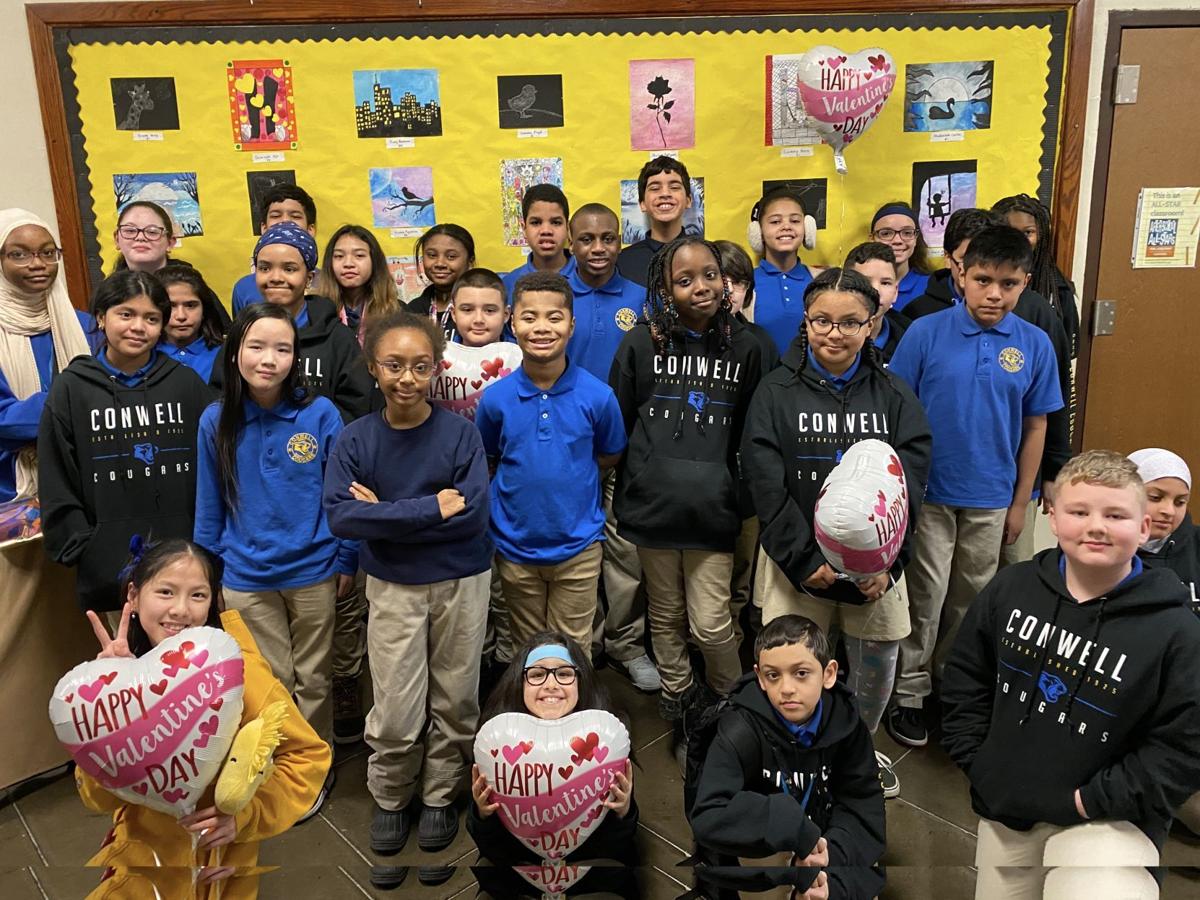 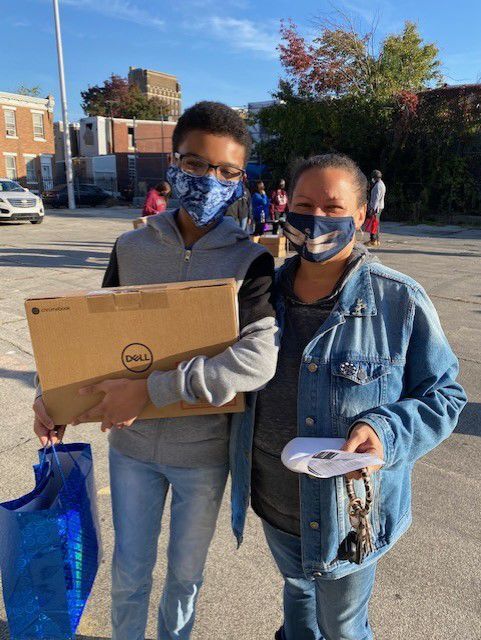 A student picks up a laptop with their guardian. 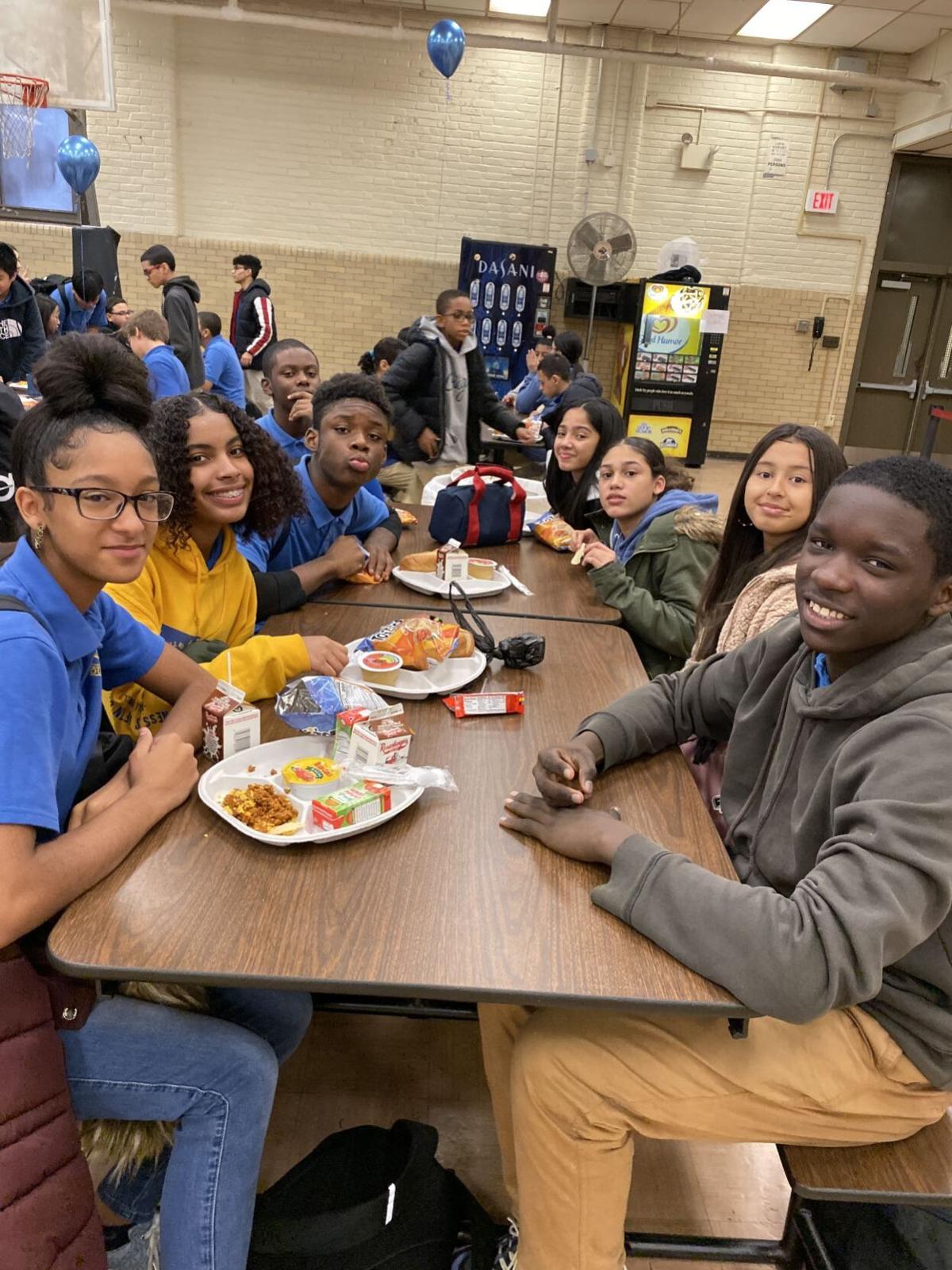 Students enjoy having lunch together pre-pandemic. 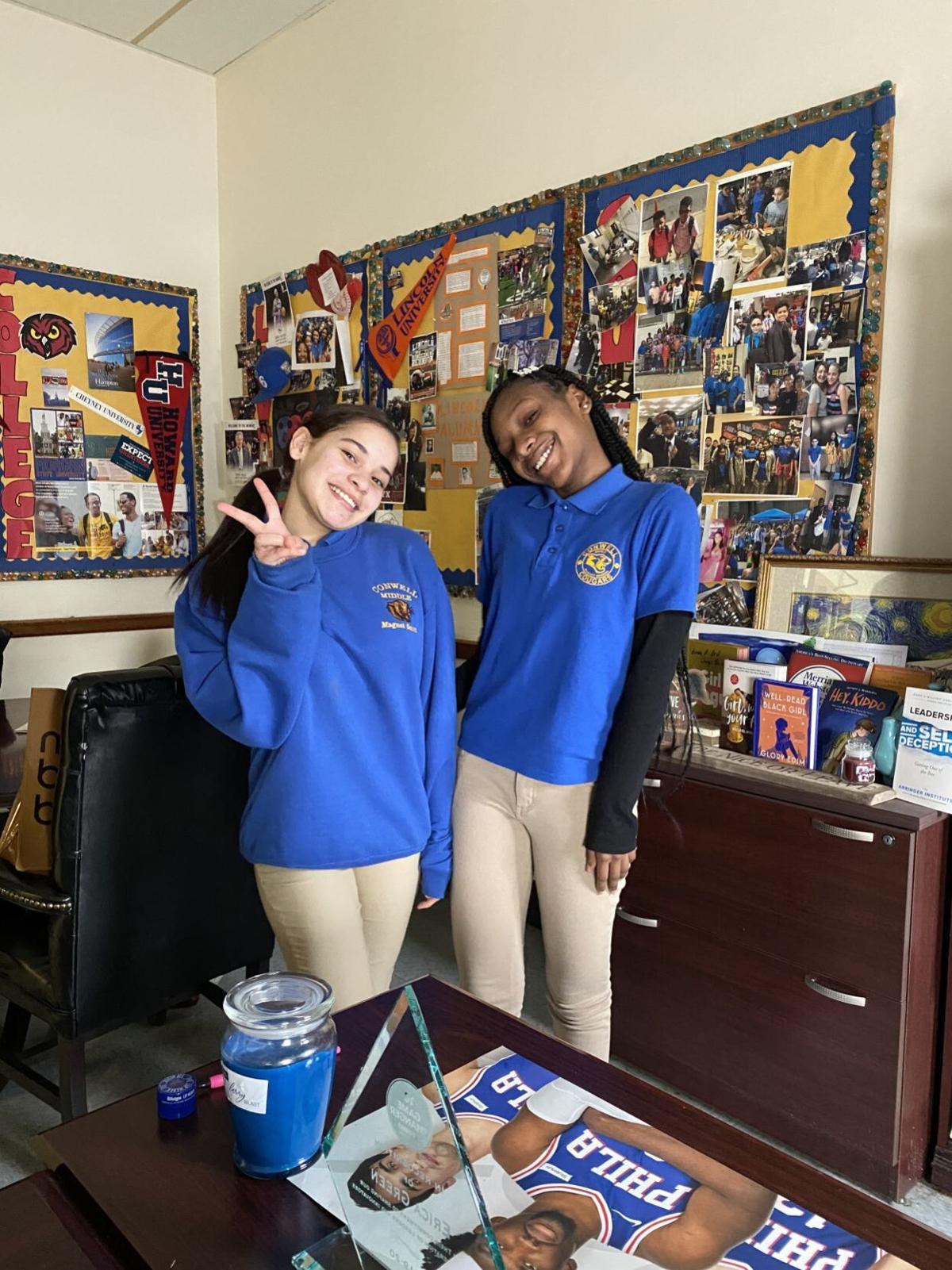 Students pose for a photo.

Students come together to play various board games, including Sorry and Yahtzee.

A student picks up a laptop with their guardian.

Students enjoy having lunch together pre-pandemic.

Students pose for a photo.

While many schools across the country made adjustments when it came to how students are learning due to the novel coronavirus, the staff and teachers at the Russell H. Conwell Middle Magnet School in Kensington utilized the virtual transition to provide opportunities for its more than 300 students.

“Even though we moved virtual, we needed to make sure that Conwell was keeping its essence,” said principal Erica Green. “We’re continuing to work together as a team and we have really been able to do some amazing things despite being virtual.”

Students start their day with a 20-minute advisory, which includes attendance, mindful meditation and social emotional learning. Advisory is followed by morning announcements.

“For February, we’ve been doing Black History Month information,” Green said. “Every Tuesday and Thursday during morning announcements we presented on different topics like HBCUs (historically Black colleges and universities), diversity in the White House cabinet, and Black-owned businesses.

“We’ve also highlighted Native Americans, National Hispanic Heritage Month and social injustice. The announcements are our way to continue to teach, motivate, and inspire our kids through the virtual learning setting, which has been pretty cool.”

Green said that in addition to the school’s programming and focusing on the wellness of students, the school also implemented a social justice component to its curriculum.

“When we made the transition to virtual learning due to the pandemic, there were also other things that were going on in the world like the deaths of George Floyd and Breonna Taylor,” Green said.

“We wanted to talk to our students about the social injustices that they were seeing and we were able to do that by implementing a social justice component to our curriculum.”

The classes, which take place every day, give students a chance to talk about a wide range of topics from discrimination to disabilities.

“I have one class and we meet for 45 minutes twice a week,” Branch said. “We recently had a conversation that focused on Black hair. We talked about rights, different legislation that that has come about because of some of the discrimination against Black hair.

“We had another conversation on African Americans and disability and how these people have been able to overcome their disabilities to succeed in life. We try to enlighten our students on topics so that hopefully these things don’t have to continue to exist.”

Smith said that what her eighth-grade students are doing in her English class merges with her social justice class.

“The first book we read in English class was ‘Poet X,’ Smith said. “The book is about a Latino young lady who is going through what our kids go through and the story is told through poetry. The book is so relatable because it deals with boys, family struggles, inner city struggles, and cultural struggles.

“Now my students are reading ‘The Hate You Give’ and considering what’s going on in the world right now that book is also relatable. Following that book, students will be reading ‘To Kill A Mockingbird.’ It’s been so great for our students to have that open conversation and I love that they’re being enlightened on certain things.”

“We’ve been doing things like Kahoot! to kind of do review games that way it’s not straight instruction all the time,” Posnan said. “We also use a website called Flocabulary and it takes all these different topics like math and social studies and they turn them into rap videos for the kids.

“It’s an opportunity for the kids to have some fun. I have an extra credit project right now where they have to make a TikTok. It’s all about trying to reach them on their level and combine learning math with the things that they’re interested in.”

Earlier this year, Dungan was teaching his sixth-grade social studies students about the Constitution and the democratic process.

However, his lesson plans changed slightly once the insurrection took place at the U.S. Capitol on Jan. 6.

“The kids had so many questions and I realized that the lesson had to focus on the terminology of civil discourse,” Dungan said. “The kids had to learn that the political process can never be taken away in the matter of violence and that was not what the framers of the Constitution intended.”

Students in Dungan’s class would also go through the process of passing a bill. Students would debate in a civil manner the merits of their law and would later pass a new amendment to their class constitution.

“The students came together and voted for a bill called The Speaking Up Act, a bill that recognizes students in class who are affected by social justice in any way,” Dungan said.

“If students see or hear something they will speak up and will receive Dojo points for it. My class incentives are through ClassDojo. That fact that students can collaborate and choose this law over other proposed laws, shows them that democracies are as strong as their civil discourse.”

Green said that when students leave Conwell, she wants them to leave feeling empowered.

“I want them to leave Conwell feeling like they have a voice, that their voice can lead to change, and that justice is important.” Green said. “I also want them to know that there are so many people who love and respect them. There is nothing that they can’t do.”