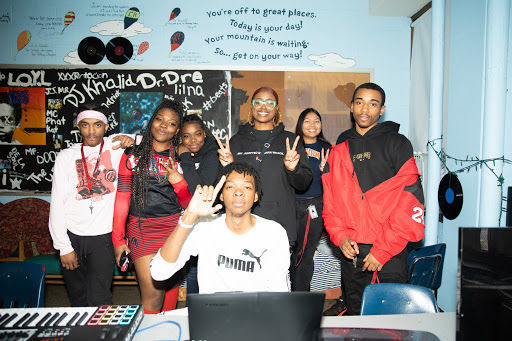 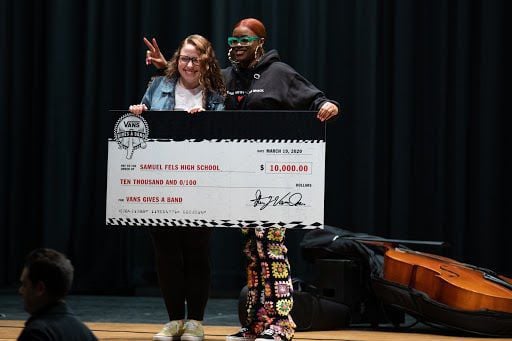 Rapper Tierra Whack holds a $10,000 check with a student from the Vans Give A Band! Program.

Rapper Tierra Whack holds a $10,000 check with a student from the Vans Give A Band! Program.

Celebrities are often known for their charitable donations. Whether they’re athletes, Hollywood actors and actresses or chart-topping artists, charity work goes across many genres. And the world’s biggest celebrities frequently donate or spend their free time volunteering with organizations that are important to them on some level.

Grammy-nominated rapper Tierra Whack is one of those celebrities. A native of Philadelphia, Whack got her start in North Philadelphia. She attended The Arts Academy at Benjamin Rush for three years before moving to Atlanta.

Now her videos have millions of views online, she has fans that support her music and she’s doing tours worldwide. Despite the 24-year-old’s busy schedule, she continues to be active in her Philadelphia community.

“I’ve had my own struggles and a similar upbringing to many kids who live in Philly,” Whack said. “I’ll never forget those hard times, but those hard times humbled me. It made me work harder and it turned me into the person I am now.

“My schedule today can get a little busy at times, but I’m still able to make time to come back to Philly and give back,” she added. “It’s important for me to be able to show kids they can do this too. No matter where I go in the world and no matter what I do in my life Philly will always be home for me.”

Whack was back in Philadelphia on Feb. 20 when she partnered with popular skateboarding and street apparel company Vans to surprise five District high schools with donations for music programs adding up to $100,000.

The awards were part of the Vans Gives a Band! Program, which was created to inspire and empower students to embrace their creativity through music and bring attention to diminishing music education budgets.

“We have so many legends from Philly, so just to be able to follow in their footsteps and be able to do what I do now is just amazing,” Whack said. “Visiting the schools that day was a lot of fun, but I’m not going to lie going into it I was a little nervous. Once I started talking to the kids and heard them rap, sing, or perform, everything just flowed from there.

“I was in their position not too long ago,” she added. “I went to a music school for three years in Benjamin Rush. Even though we had nice programs there, I remember kids wanting to have more or do certain things in the program and we couldn’t do it because we didn’t have the funding. So for me to be able to do this with Vans is amazing. This will help a lot of kids.”

Over 15 Philadelphia schools submitted applications to the Vans Gives a Band! Program. As part of Vans’ commitment to enabling creativity in local communities, the iconic shoe and fashion brand was pleased to be able to help these schools in uplifting their music programs.

The five recipient schools joined 14 other schools in Brooklyn, New York and Detroit, all cities that have hosted House of Vans locations and implemented the Gives A Band! Program.

Whack said the partnership she has with Vans was always important because she always liked the brand and they have a mutual connection in wanting to give back.

“Vans has always been one of my favorite brands,” Whack said. “I wore them in high school and I continue to wear them today. When they reached out to me to say they were fans of mine, we just vibed. We had a mutual respect for each other. We did an event a while back in Philly and it was successful.

“We made some sneakers together, which we should be releasing soon. It’s always been love between myself and Vans. They also knew how much I love giving back to my community and they like to give back also. That whole experience of giving back to five schools in Philly just felt good.

“It was a surreal moment for me because it made me realize that I’m really doing something that I always wanted to do, which is giving back and I made it happen,” she added. “This is only the beginning. I’m already talking to my team and telling them I want to do more things like this. I want to continue to come back to Philly and inspire these kids and make a difference in their lives.”

For an entertainer, life on the road can be pretty grueling. Philadelphia native Tierra Whack loved playing the Made in America festival but i…

Last weekend at the Grammy Awards, rapper Tierra Whack was anxious to hear whether she won this year’s award for best music video.

Justin Timberlake has released an upbeat duet with Anderson .Paak, called "Don't Slack," which will be featured on the upcoming "Trolls World …

As a kid, Philip Freelon loved to draw and build things. In the classroom, his favorite subjects were math and science. His passions as a chil…

As a part of its ongoing focus on online learning resources, the National Constitution Center will host a free online interactive course for h…

Netflix, Hulu are one of the most popular things to do during quarantine

While coronavirus has forced everything to come to a standstill worldwide and “Stay at Home” mandates remain in place until at least April 30,…

Diabetes and pre-diabetes affect more than over 100 million people in the U.S., costing more than $325 billion each year. It’s now predicted t…