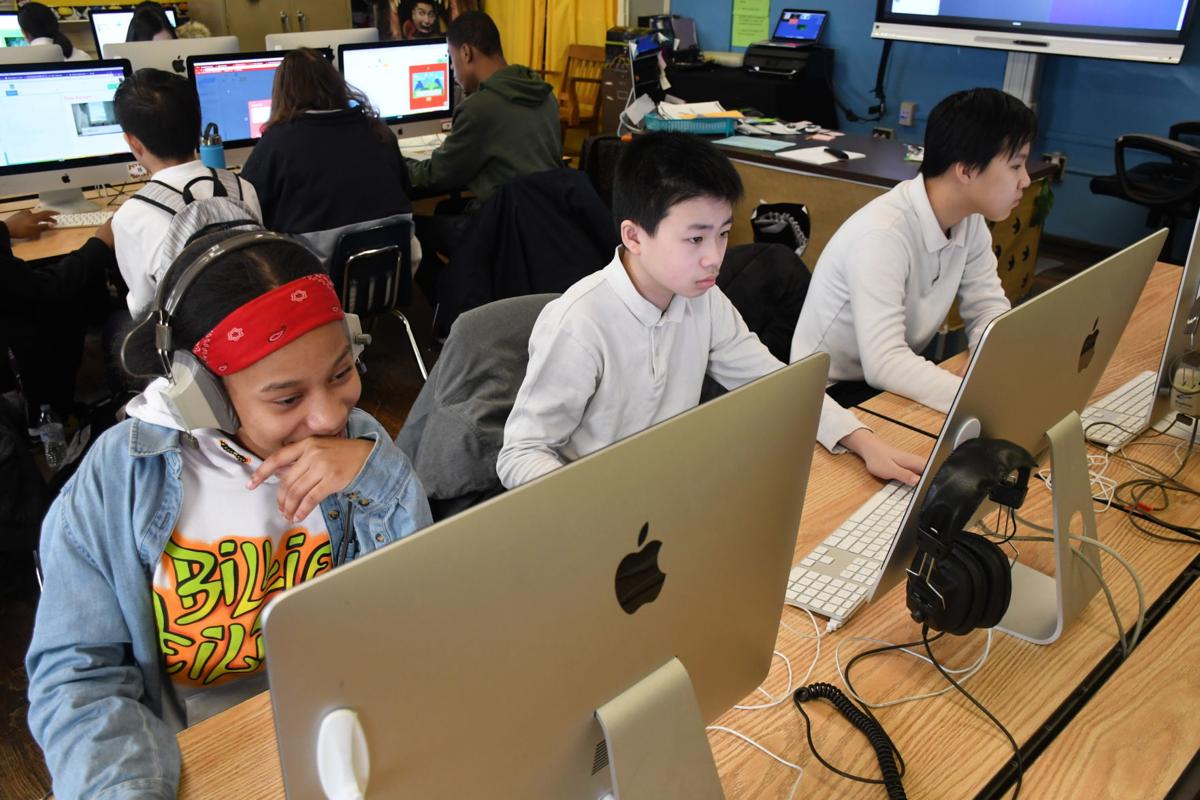 Eighth-graders Daviyon Hicks, Aiden Lin, and Lewis Liu work on the computers in the coding class. 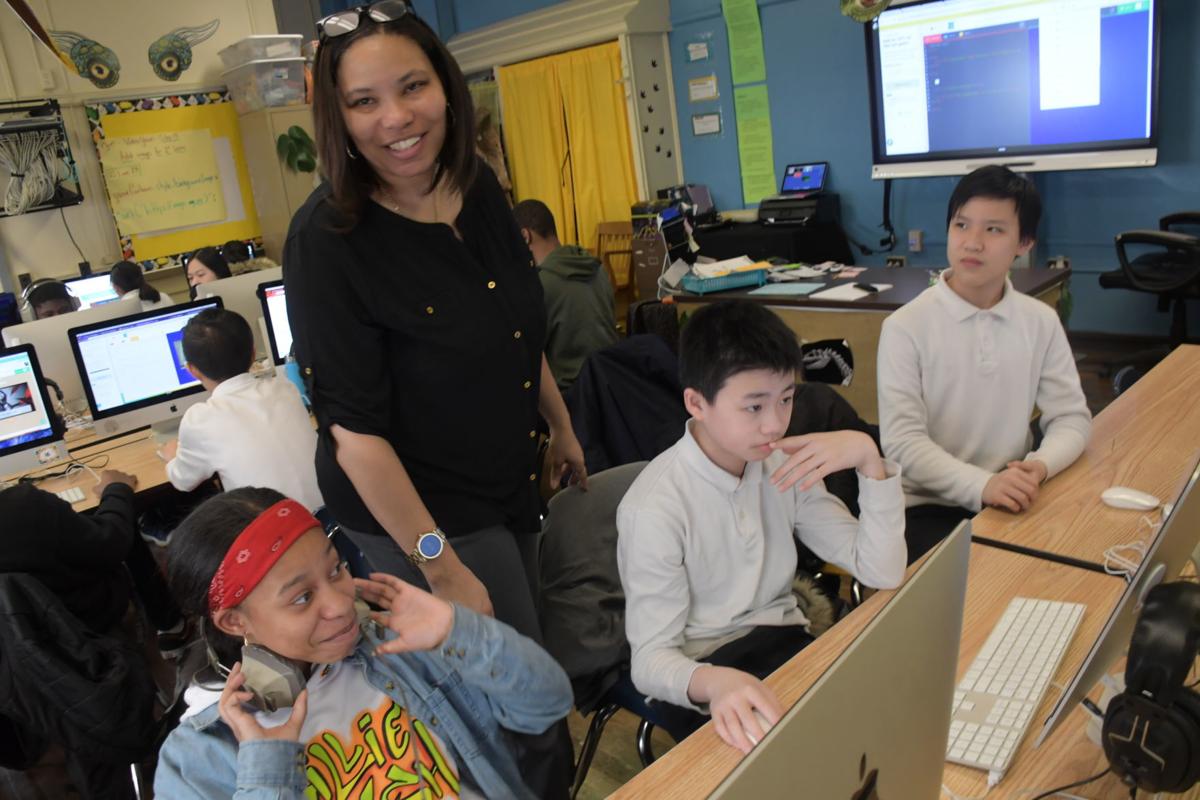 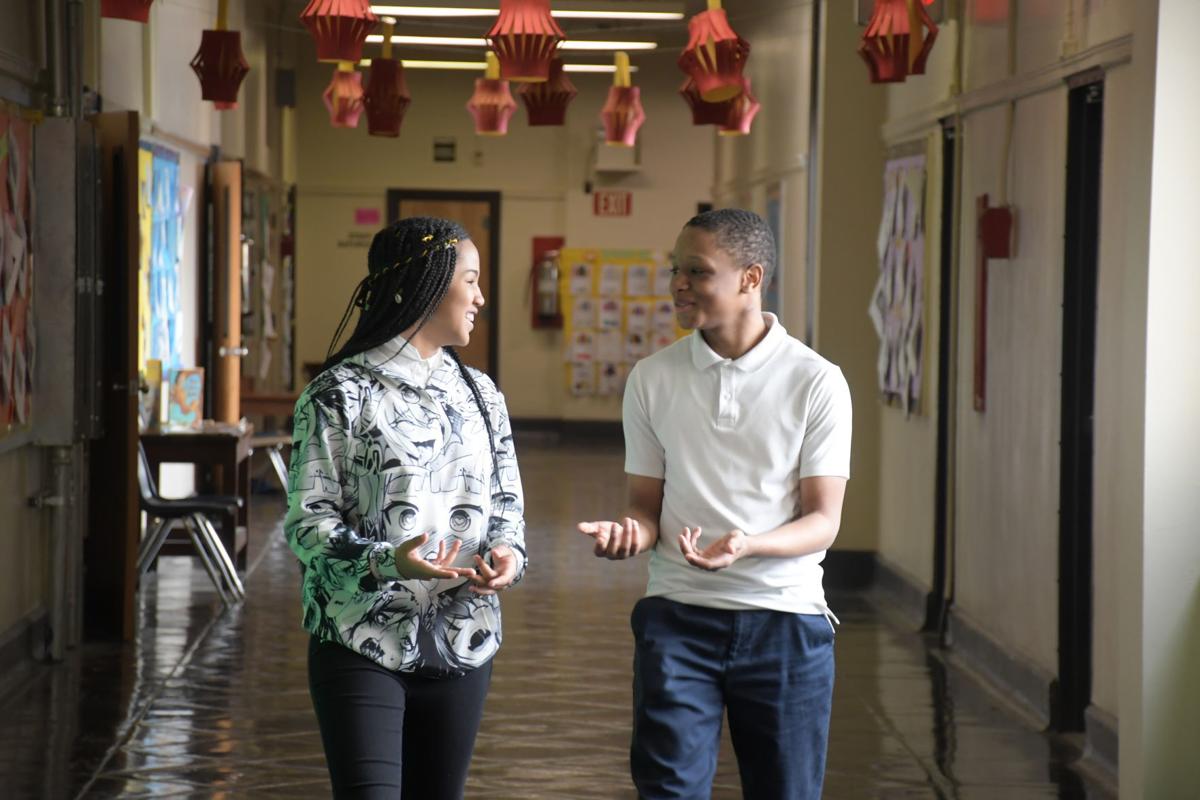 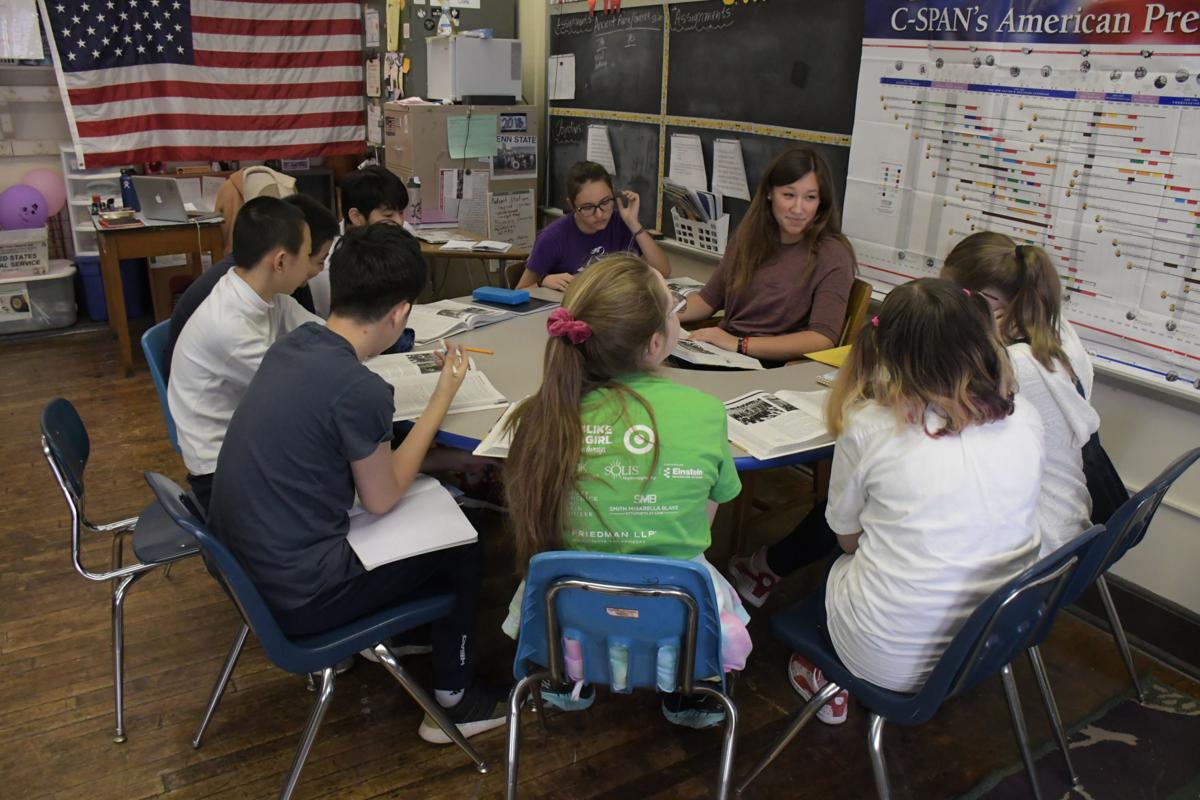 Student teacher Sabrina Knapp works with a group of students in the social studies class. 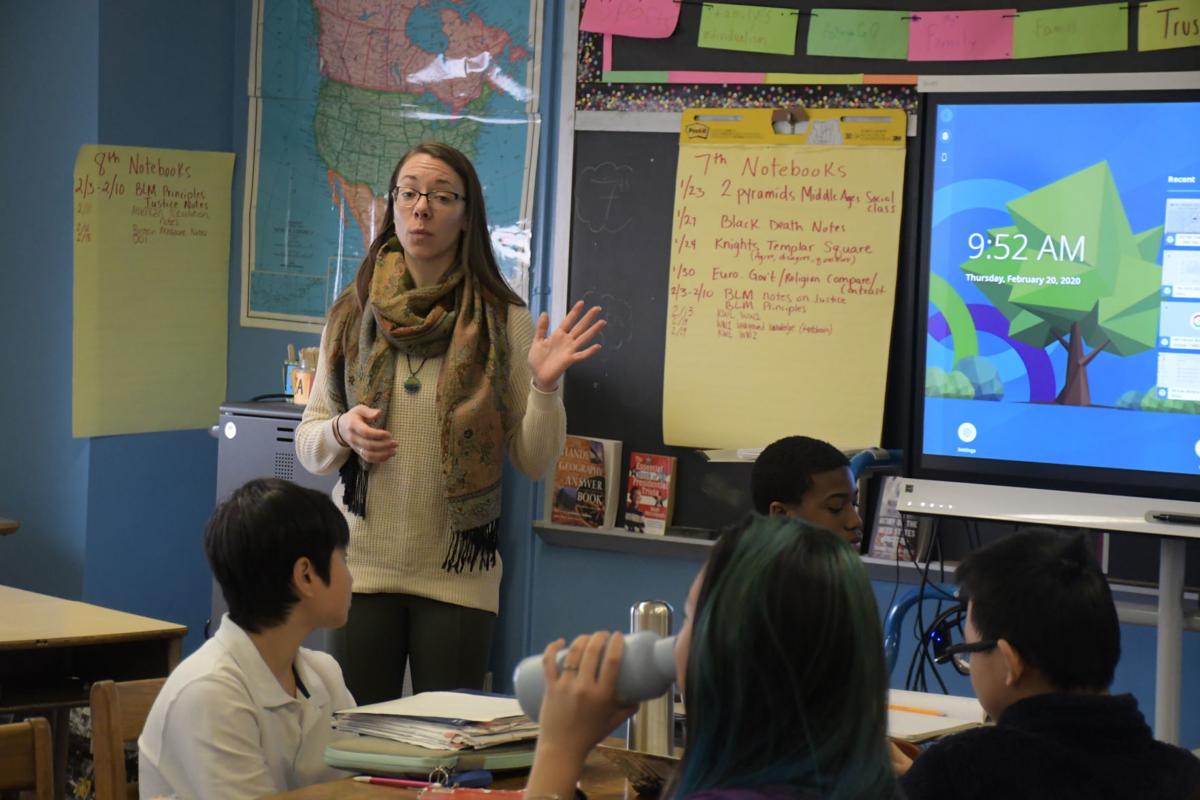 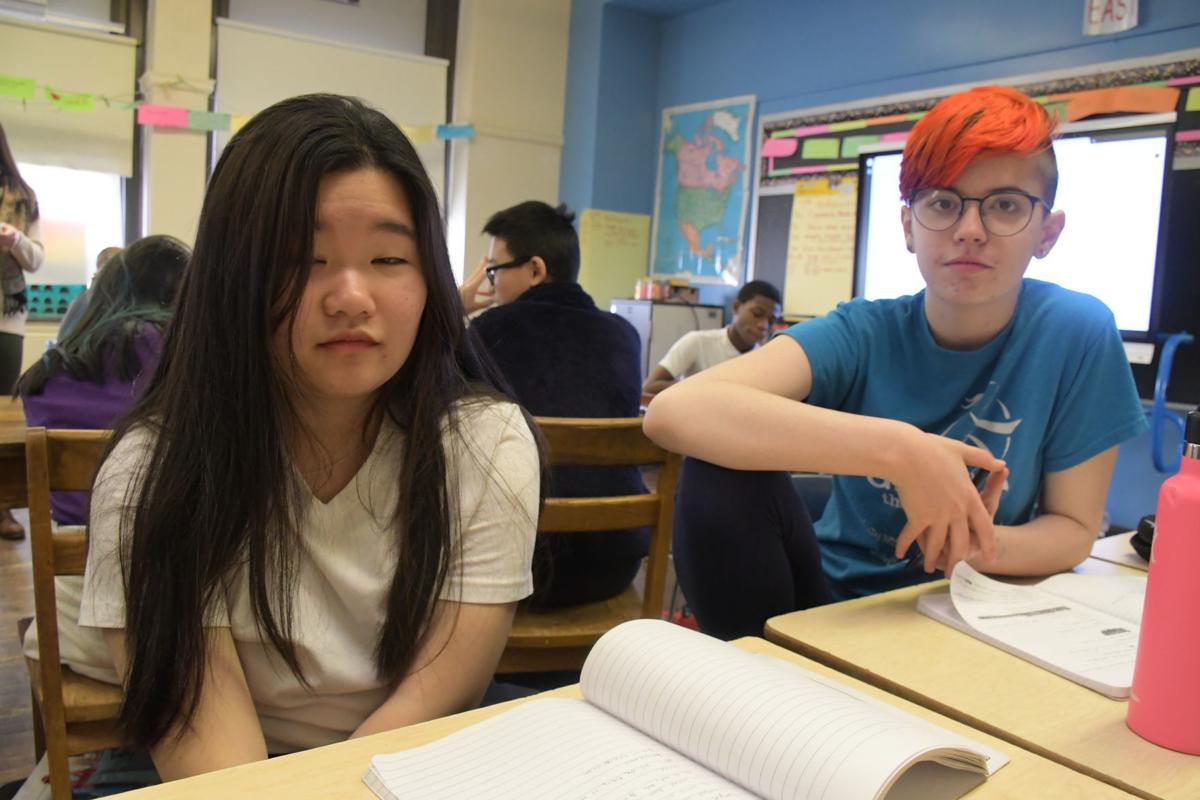 Eighth-graders Daviyon Hicks, Aiden Lin, and Lewis Liu work on the computers in the coding class.

Student teacher Sabrina Knapp works with a group of students in the social studies class.

The success of General George A. McCall School does not just rely on the students’ academic excellence and personal growth.

The teachers, parents, staff and faculty at the K-8 school in Society Hill also play a pivotal role by giving students endless opportunities they might not receive elsewhere.

“We feel like our middle school overall is pretty strong,” said principal Stephanie McKenna. “We’re the only K-8 school in the District that offers biology now to our students. We have about 33 students that take both algebra and biology in middle school where at the end of the class they will take the Keystone Test.

“If the students pass the Keystone Test they’re tracked differently in terms of high school. They’re able to opt out of taking those classes in high school because they already passed those subjects at McCall. We have a new coding program, where all students are in coding.

“We want our students to know that their teachers and staff care about them and we’re here to help them be successful,” she added. “We don’t want them to just learn academics, but we also want them to be strong citizens.”

Katherine Smith teaches the coding program at McCall. She said that through modification she’s been able to use similar content throughout all of her lessons despite the grade level.

“For my lessons, I do the same overarching topics, but at different levels,” Smith said. “My first- and second-graders are doing coding, but their coding unit is a lot shorter and I use a different platform with them like Tynker. My third-, fourth-, and fifth-graders also do coding, but their projects are based around digital art and music, 3D design and robotics.

“They’re all going through the process of learning those three languages and producing a final project,” she added. “My goal as their teacher is to help make them into the leaders of tomorrow. Everything they learn in this class I want them to apply to the outside world. I not only want to prepare my students for the next level, but I want them to be the creator and not just the consumer.”

“My game is about this post-apocalypse world where demons take over,” Sierra said. “My main character is a young boy and he’s supposed to be able to save the world. I watch a lot of movies based around that concept, so for my game I wanted to do something similar, but in my own way.

“I’ve always been interested in technology, so before taking this class at McCall, I was actually familiar with coding,” she added. “I knew how to break down code and basic concepts, but this class helped me take all of that to a different level. I’ve learned so much since being in Ms. Smith’s class.”

“The students are learning about the history of the continents of Europe, North America, and South America,” McCann. “It’s a heavy reliance on geography, the human population and migration patterns, and learning about culture.

“The unit the students are learning now is on the history of Europe and focuses on Europe’s changing borders over time; we’re currently in the Age of Exploration. To help learn different explorers, the students were broken into groups and they had to find lesser known explorers and do a presentation on them.

“They had to figure out what their major accomplishments were, where did they travel to, and what was their motive,” she added. “They had to provide as much information as possible about their explorer.”

“I didn’t really know anything about him beforehand, but the biggest thing that I have learned about him was that he helped Native Americans by trading food and fur,” she added. “It took us about three days to do our overall project.”

McCann said that the curriculum she is using for her seventh- and eighth-grade social studies classes were written by Philadelphia school teachers, including herself.

“I was actually one of the writers for the eighth-grade curriculum and it was such a great experience,”McCann said. “The changes for the new curriculum came about because we didn’t have a current socialist curriculum for a number of years. A lot of our resources and textbooks were outdated and we really wanted to highlight other lesser known stories.

“Both curriculums are brand new as of last year and this year and we moved to a project-based curriculum. We’re really trying to get students to analyze primary sources. To be able to pick our perspective and bias and be able to critically analyze these sources to make conclusions of their own.

“Our process of writing the curriculum was a research process,” she added. “We were finding resources to use in different facets in terms of online articles, resources, and websites. We didn’t want to base anything on one text. It’s also a lot of collaboration work between students. The students have really liked the changes and are more engaged in what they’re learning since the changes were made.”