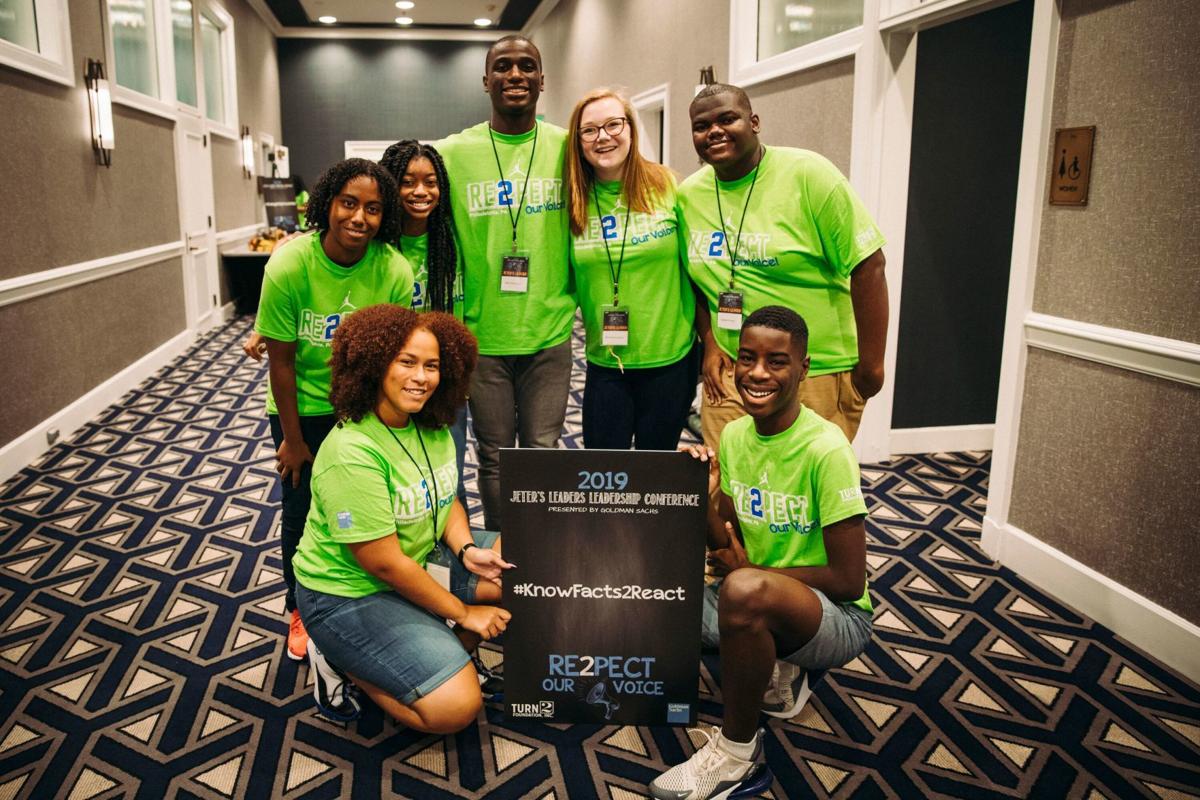 Jeter’s Leaders pose for a picture during the youth conference. 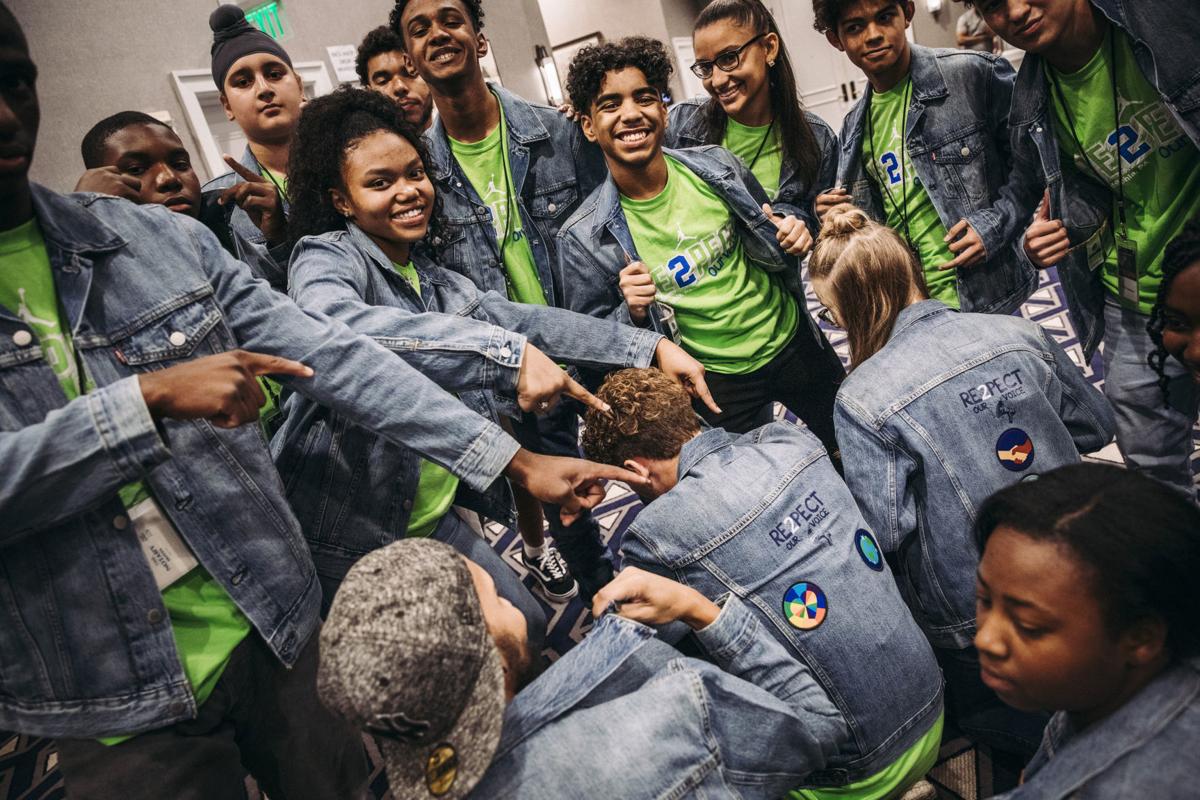 Jeter’s Leaders show off their custom social change jackets during the leadership conference. 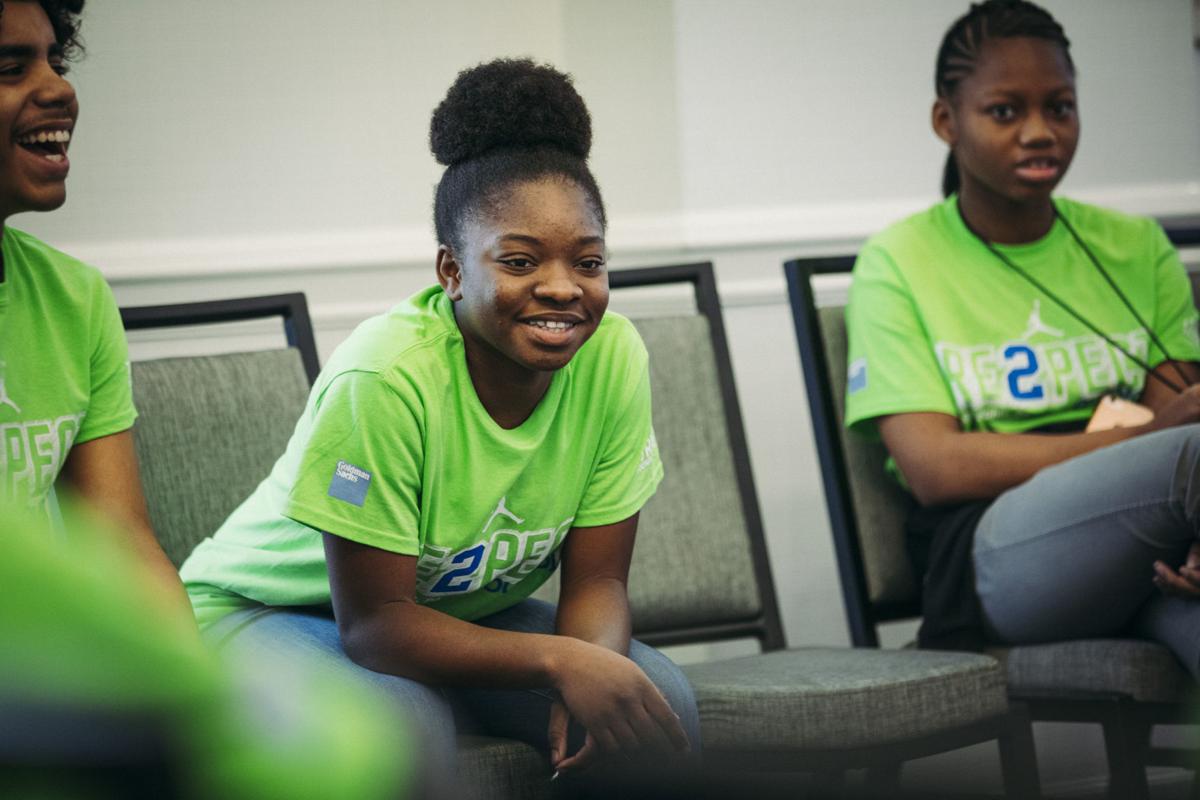 Jeter’s Leaders participating in a workshop. 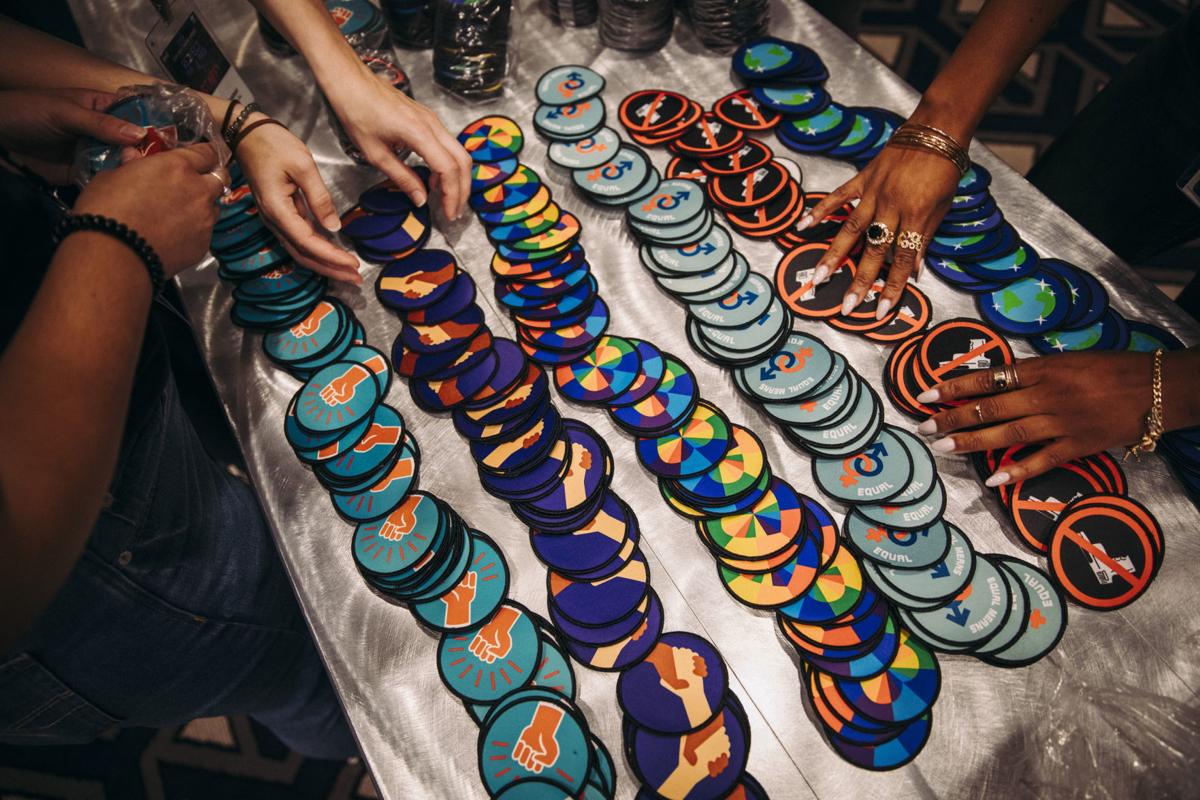 The patches that were used for the social change jackets during the Jeter’s Leaders Leadership Conference were lined up on a table. 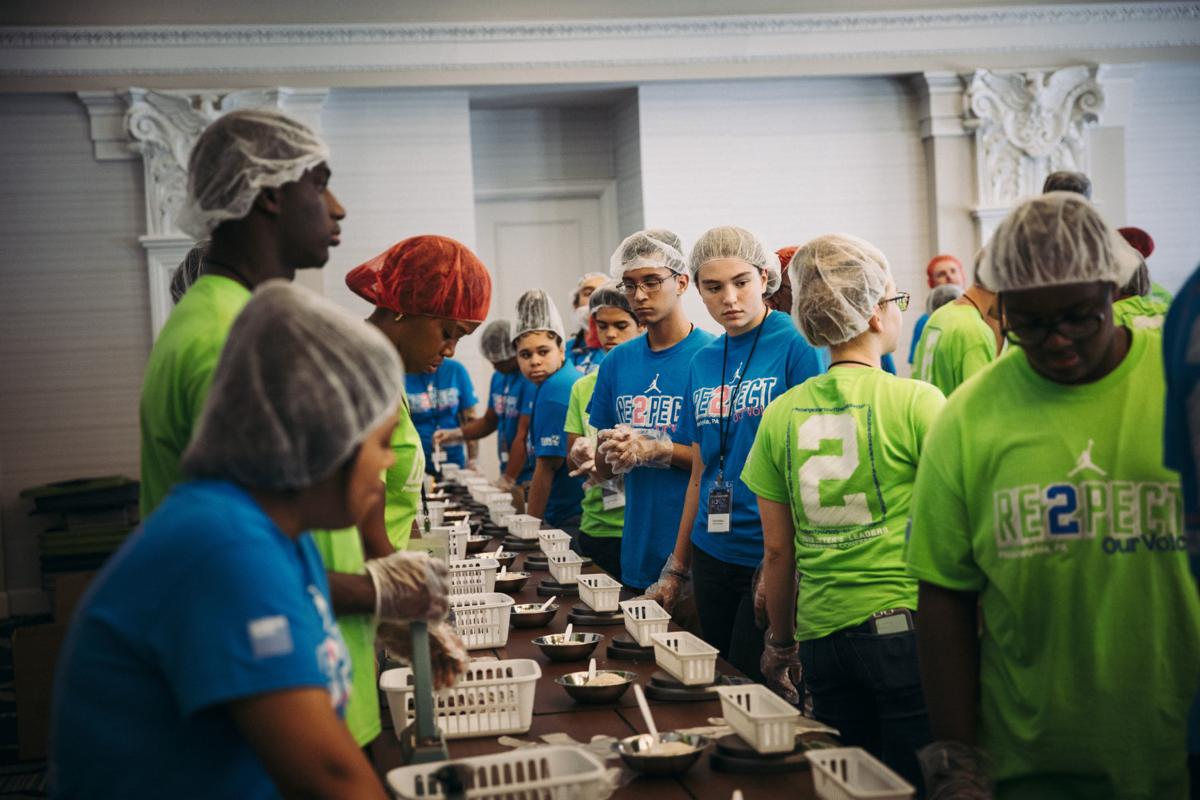 People packaging meals to be donated to Philabundance. 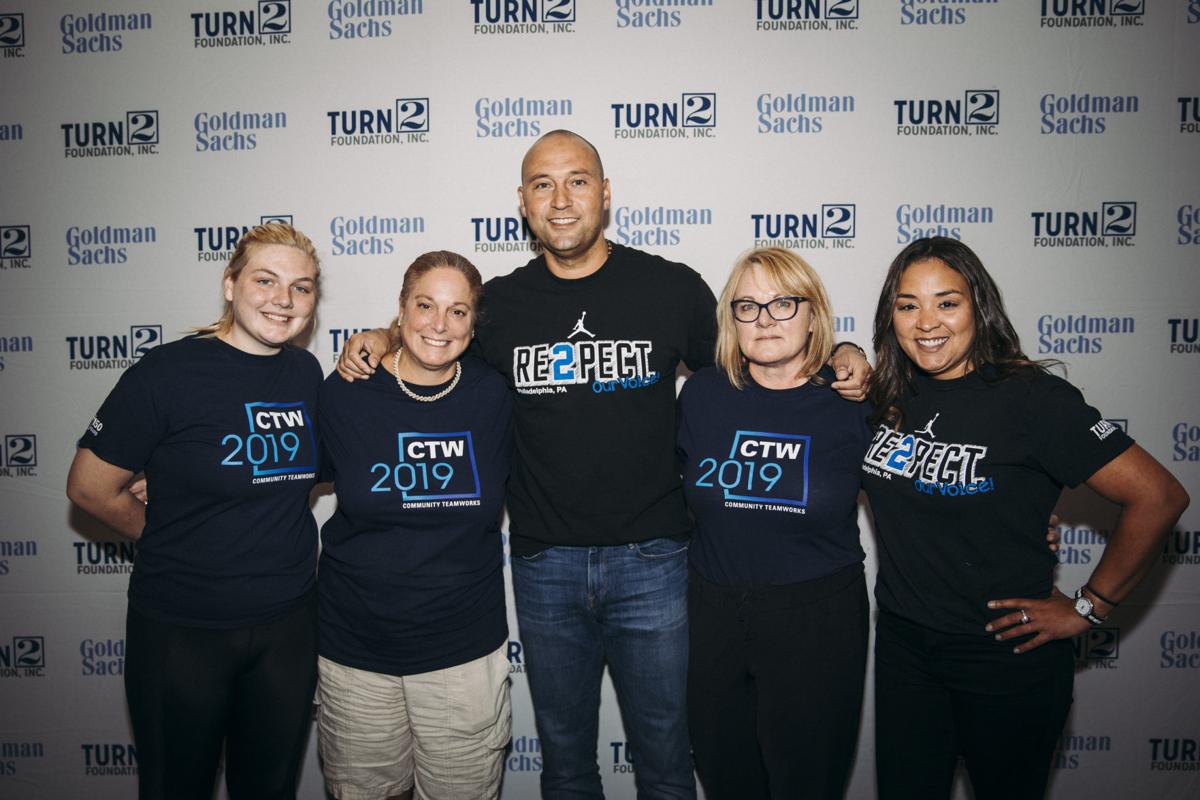 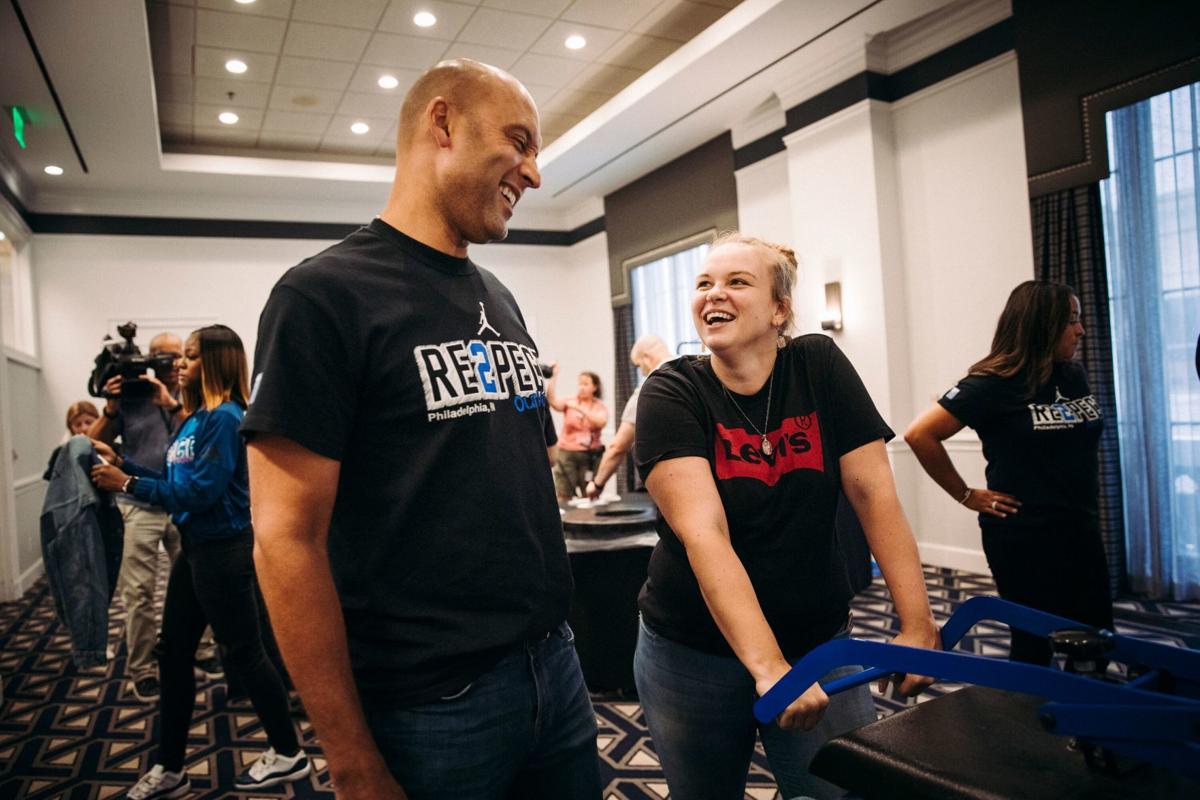 Derek Jeter participating in workshop to create social change jackets that were donated by Levi’s and Haddad Brands. 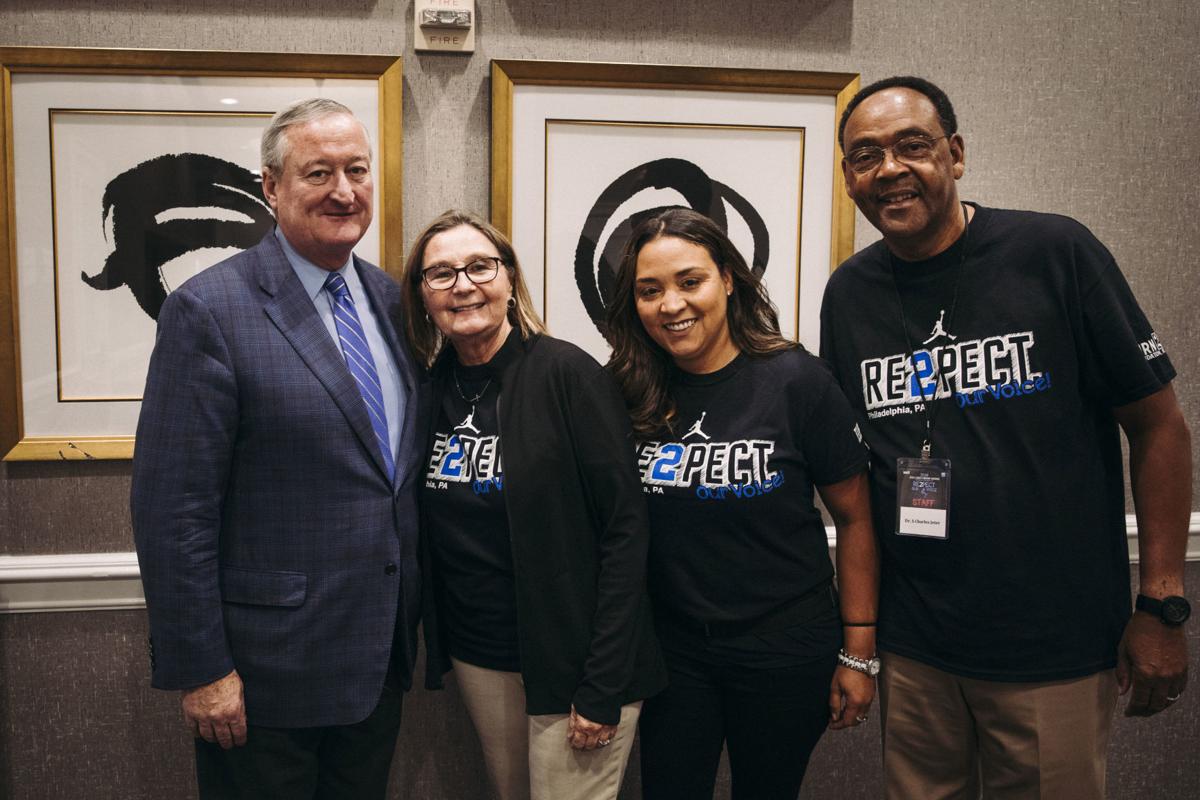 Jeter’s Leaders pose for a picture during the youth conference.

Jeter’s Leaders show off their custom social change jackets during the leadership conference.

Jeter’s Leaders participating in a workshop.

The patches that were used for the social change jackets during the Jeter’s Leaders Leadership Conference were lined up on a table.

People packaging meals to be donated to Philabundance.

Derek Jeter participating in workshop to create social change jackets that were donated by Levi’s and Haddad Brands.

Established by Jeter in 1996, the Turn 2 Foundation motivates youth to rise above negative influences, lead healthy lifestyles and serve as agents of positive social change.

The signature initiative, Jeter’s Leaders is an intensive four-year program for high school students who serve as ambassadors for Derek Jeter in their communities. For the past 14 consecutive years, 100 percent of Jeter’s Leaders have gone on to attend college after high school, according to a press release.

“This was an amazing week that provided young people with an opportunity to tackle major challenges, give back, grow as leaders, and learn how to create positive social change in their communities going forward,” Jeter said in a statement. “I’m blown away by our Jeter’s Leaders and their passion, determination, and dedication to making a positive difference. I’m so proud of their work together as a team to make this conference such a tremendous success.”

Presented by Goldman Sachs and organized and hosted by Jeter’s Leaders, the conference, which was held August 5-8, featured an impactful community service project, a panel discussion empowering youth to rise above negative influences and serve as leaders within their own community, and workshops that addressed critical issues to young people like drug and alcohol awareness, mental health, social media, sexism, racism, and homelessness.

“We are proud and honored to celebrate over a decade of partnership with the Jeter’s Leaders program,” said Tuck York, global head of Private Wealth Management at Goldman Sachs, in a statement. “We have benefited from this relationship that brings forth talented, dedicated and inspired youth who, in some cases, have come to work with us at Goldman Sachs.”

During the conference, Jeter and Turn 2 president Sharlee Jeter teamed up with the students for a community service project in partnership with Goldman Sachs Community TeamWorks. As part of The Pack Shack’s Feed the Funnel Party, the group worked together to package more than 75,000 meals that were donated to Philabundance, a local food bank.

The conference’s participants also expressed their passion for social change through designing custom jean jackets with artwork that signified their mission. The 525 jackets, which were supplied by Levi’s and Haddad Brands, were donated to William McKinley Elementary School’s backpack program as well as students participating in the conference.

The conference ended with the ‘Re2pect Our Voice’ Youth Summit, which featured a discussion with comedian writer and producer Jordan Klepper, acclaimed rapper Rapsody, and Derek Jeter. Moderated by Fox 5 NY reporter Lisa Evers, the panelists talked about their own experiences and shared obstacles that they overcame.

“The Jeter’s Leaders Leadership Conference is an outstanding event that provides young leaders with a platform to identify and address solutions to real, critical challenges,” said Sharlee Jeter in a statement. “It’s so important for young people to step up and work together to inspire positive change in their communities and beyond. We are so proud of their accomplishments during the conference. We are also grateful to Goldman Sachs for partnering with us to present such a fantastic program, and to Levi’s and Haddad Brands for supporting our efforts.”

Deaths from heart disease and these other conditions are on the rise, research suggests

Death rates in the United States due to cardiometabolic diseases -- heart disease, stroke, diabetes and high blood pressure -- have either pla…