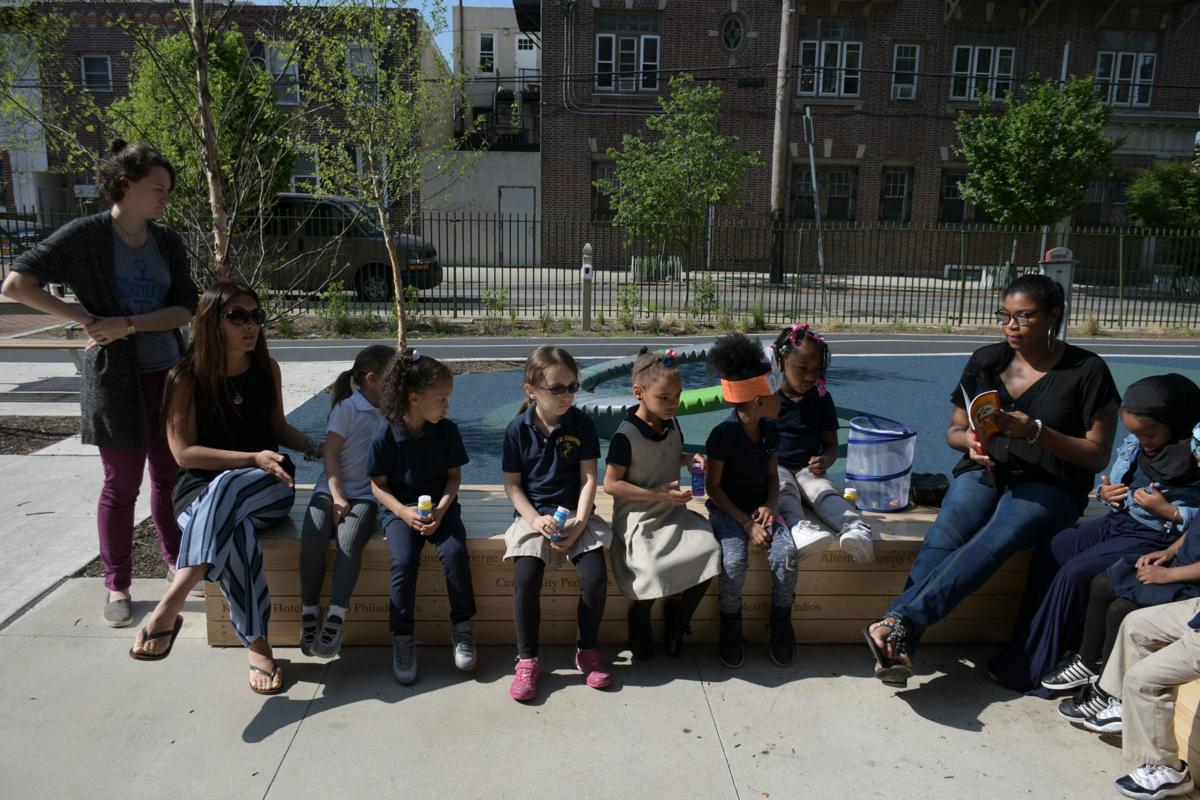 Kindergarten teacher Rachel Jamerson reads “The Caterpillar and the Polliwog” by Jack Kent to her students. — PHOTOS BY ABDUL SULAYMAN/TRIBUNE CHIEF PHOTOGRAPHER. 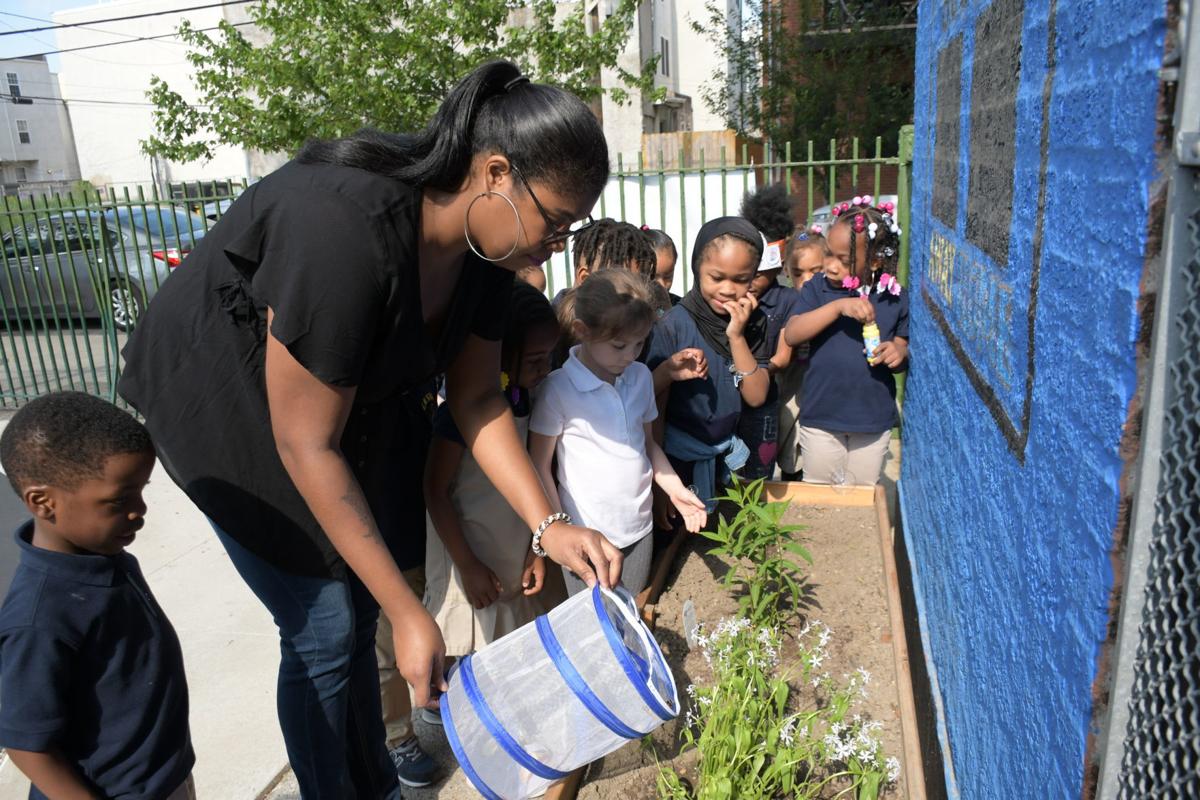 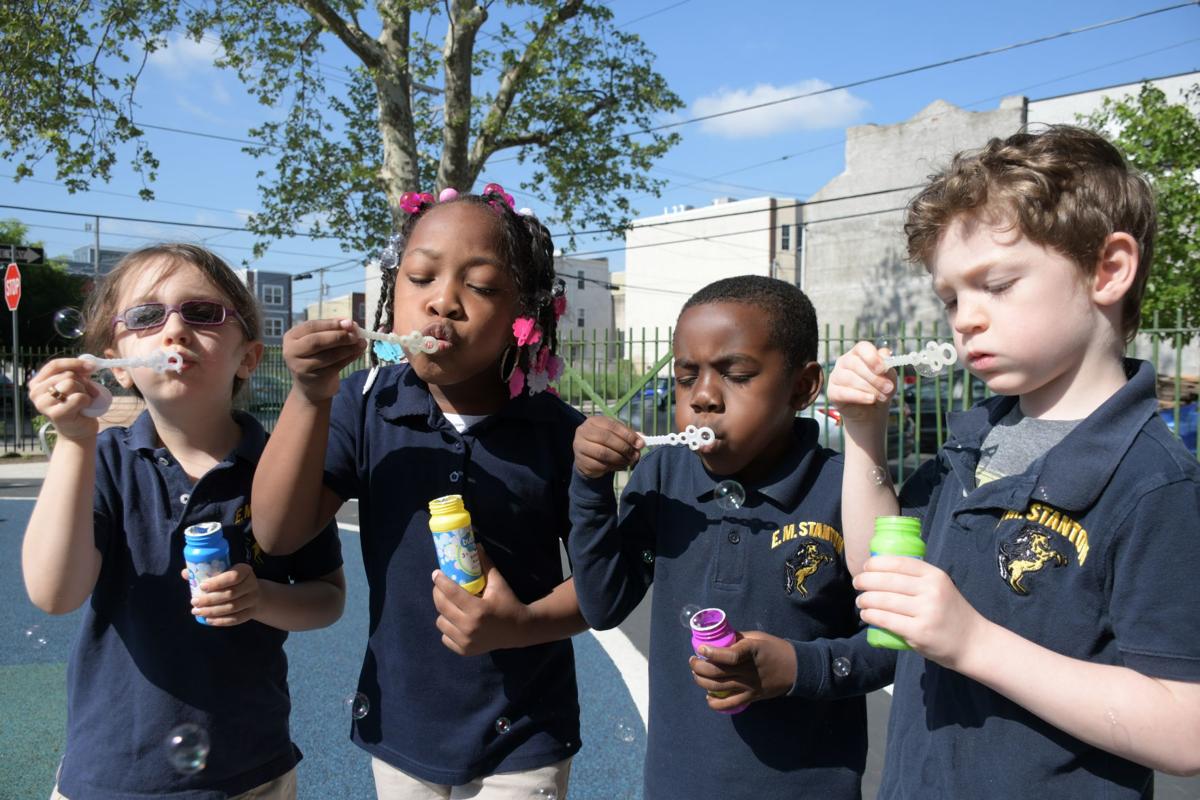 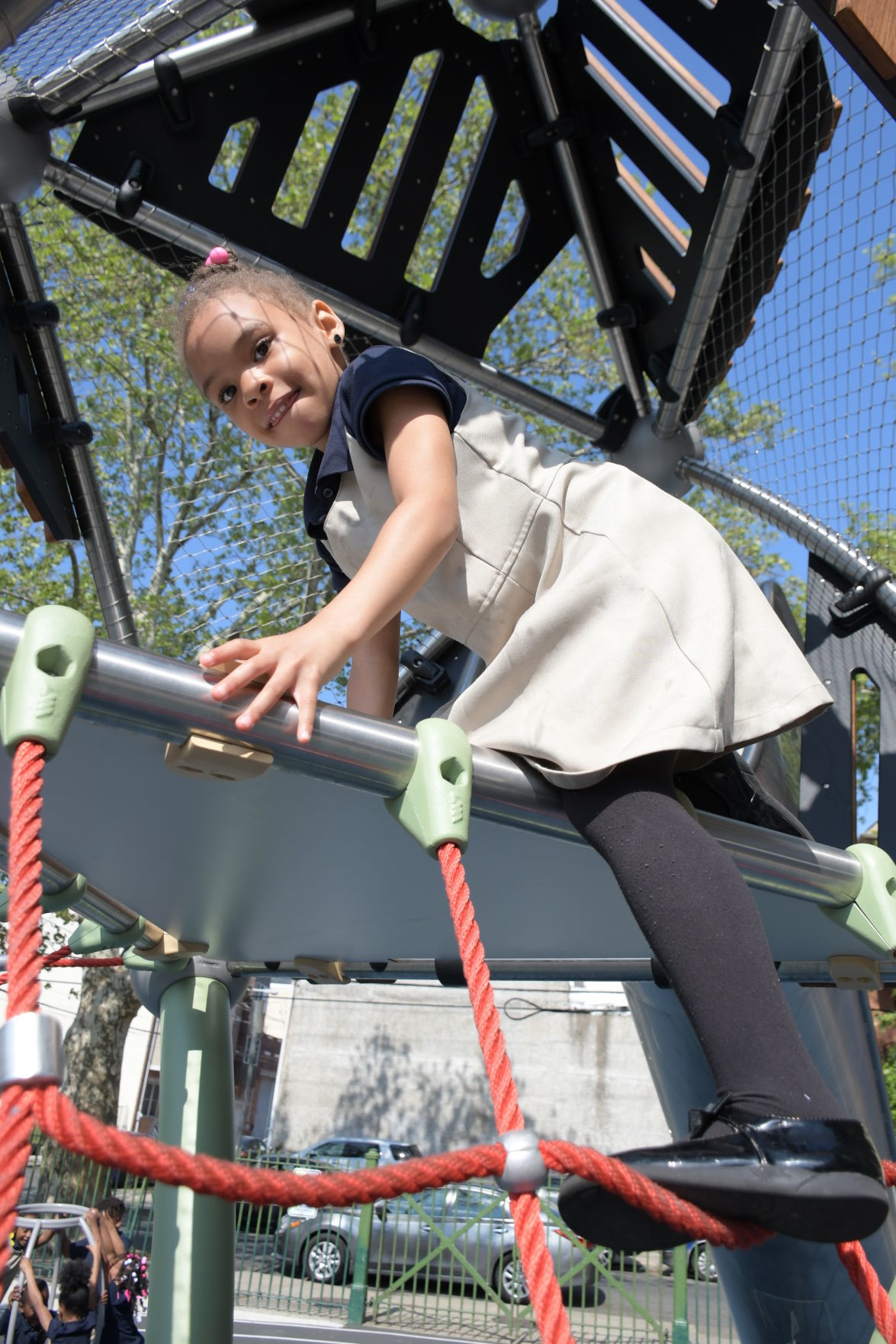 Kindergartner Niyahna Williams climbing the equipment on the playground. 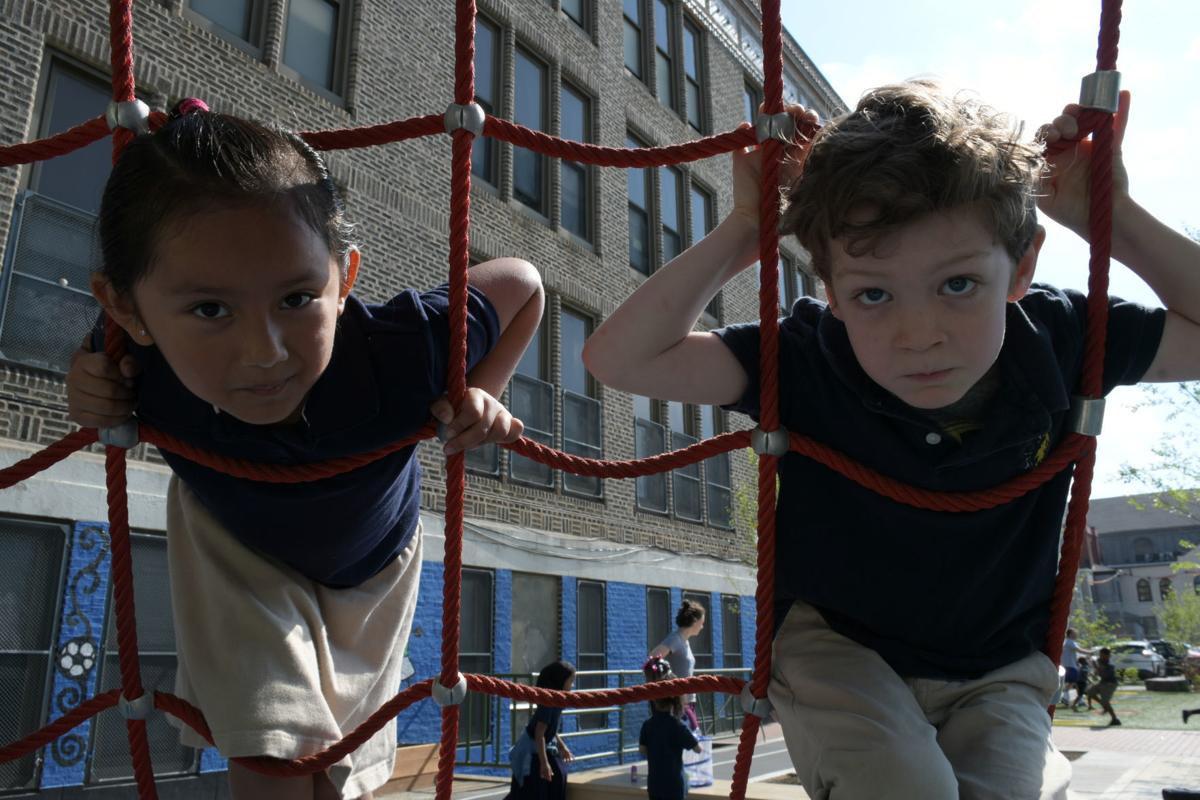 Kindergartners Melanie Lobato and Iggy McGuiness climbing the rope on the playground equipment. 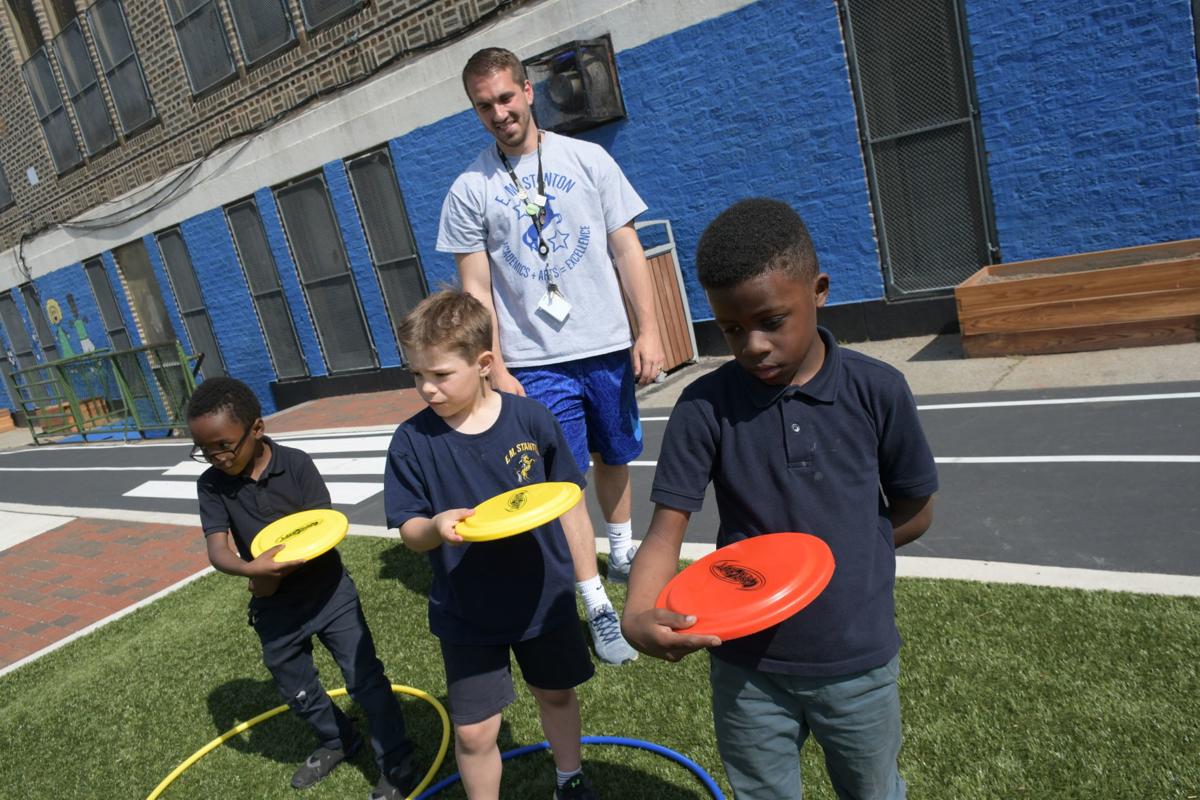 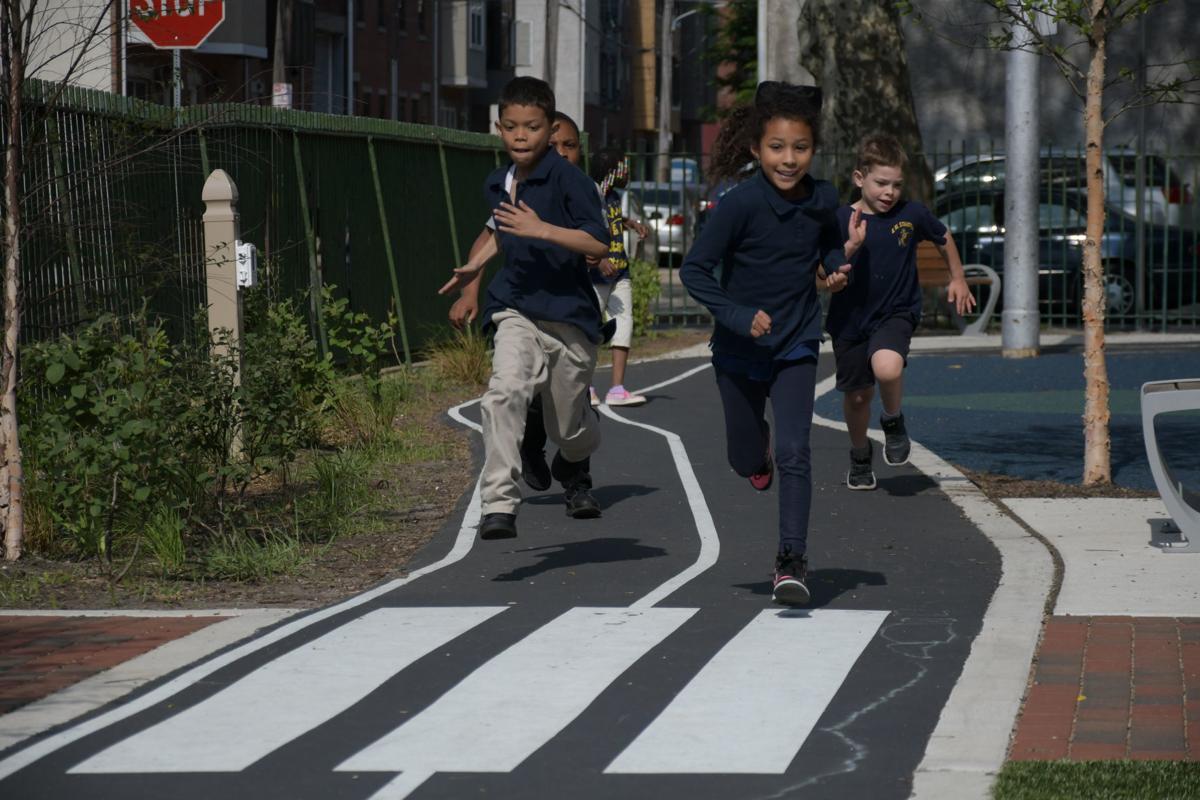 Students run around the track in the schoolyard. 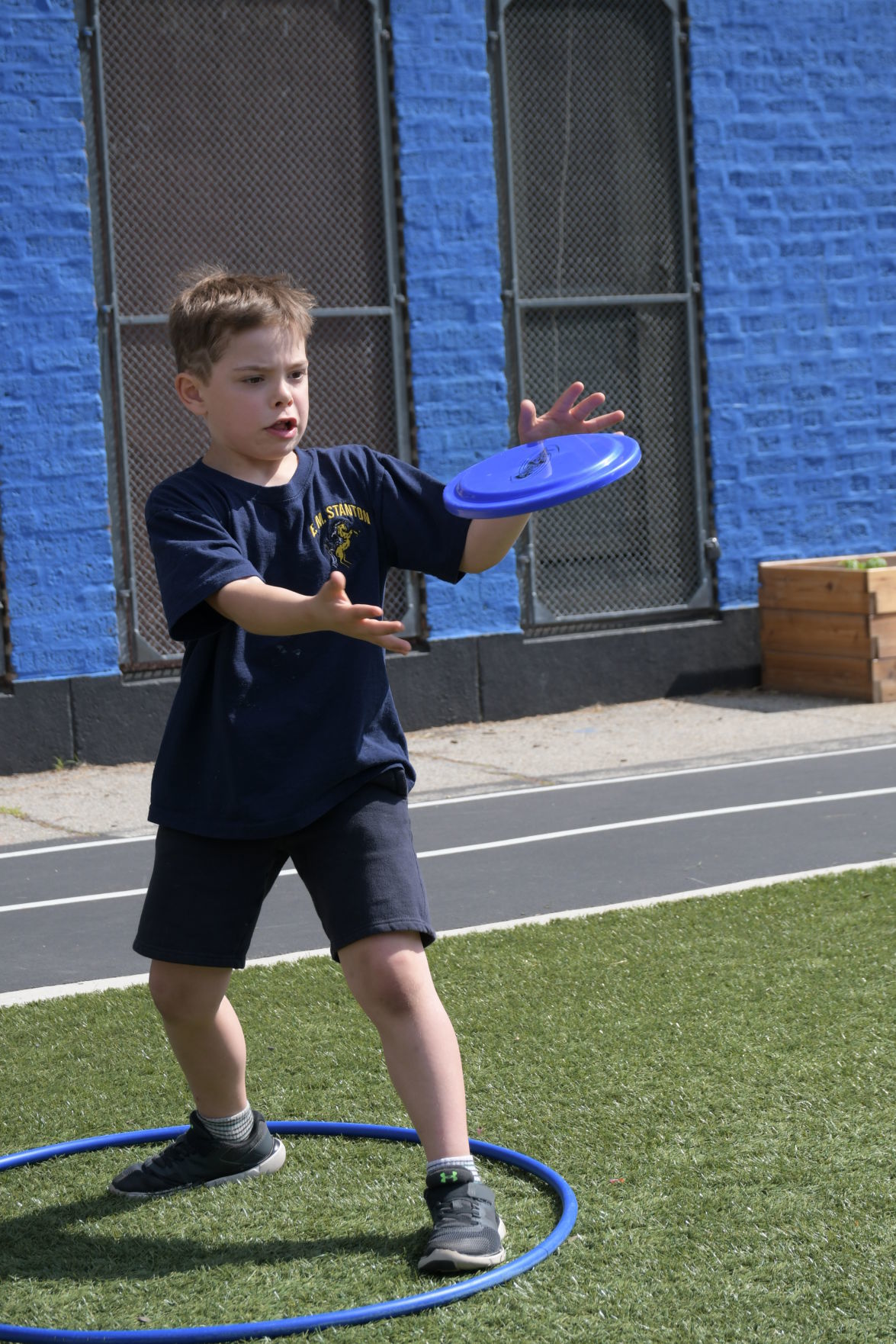 Cole Stromberg gets ready to catch a Frisbee. 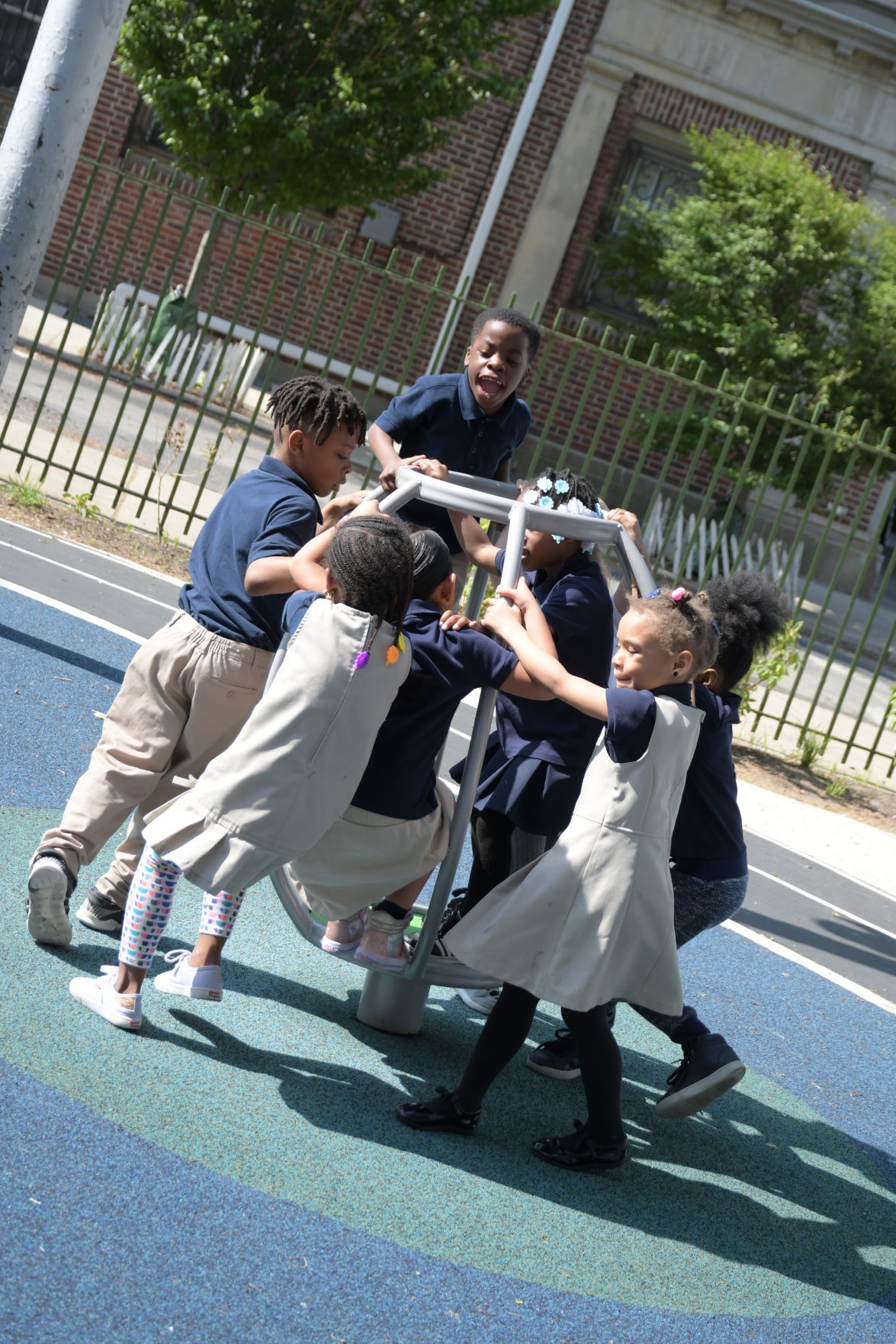 Kindergarten teacher Rachel Jamerson reads “The Caterpillar and the Polliwog” by Jack Kent to her students. — PHOTOS BY ABDUL SULAYMAN/TRIBUNE CHIEF PHOTOGRAPHER.

Kindergartner Niyahna Williams climbing the equipment on the playground.

Kindergartners Melanie Lobato and Iggy McGuiness climbing the rope on the playground equipment.

Students run around the track in the schoolyard.

Cole Stromberg gets ready to catch a Frisbee.

From collaborations with local arts and cultural organizations as well as businesses and associations, the Edwin M. Stanton School offers its K-8 students an engaging education.

“I have a one-year service commitment to the school,” said community partnerships coordinator of AmeriCorps VISTA Marina Stuart. “I’m kind of the point person for over 30 partnerships that work within the school building. We have a violin, band, African drumming and dance teacher who come in once a week to work with our students. We have a dramatic teacher in residence. Our seventh graders just finished performing ‘The Tempest’ as a collaboration between Stanton and Bryn Mawr College.

“We have an organization such as the Clay Studio that comes in and does that work with our children,” she added. “They will bring in the clay and set up the classroom as a clay studio. We have a really good partnership with the Rendell Center, which is a civics-based non-profit. They do mock trials with the students. They have judges that come in and preside over the classroom court.

“One of our newest partnerships that was actually funded through the Stanton Community Partners is Bilingual Butterflies. It is a Spanish immersion program. They come in once a week for a half hour. Our kindergarten through third grade students take the Spanish class. At Stanton, we just want to give the students as many opportunities as possible.”

In 2012, the SRC had marked the Stanton School for closure, but due to the hard work and advocacy of parents, students, and neighbors the school has remained open. Since keeping its doors open, the school has not only performed well academically, but they continue to make improvements both inside the building and out.

“Since 2012, we’ve been focusing on what the capital improvements for the school is going to be,” said school advisory council [SAC] chair and parent Christopher Stromberg. “One of the first things we renovated was the cafeteria. We then moved on to the schoolyard; we really wanted to give the kids and the community a better place to play.

“We worked for about three to four years on getting grants, partners and raising enough money to completely redo the schoolyard, which opened this year,” he added. “A couple years ago, I got involved with SAC. This year, we introduced a position called the diversity and inclusion officer.

“We’ve seen the diversity of the school really increase over the years, so we wanted to create a position that would reflect that. We want the families to have a voice. We’ve accomplished a lot of the last several years, but this is just the beginning. We have more we want to do.”

In 2017, Stanton received a grant from the NFL through its Fuel Up to Play 60, an in school nutrition and physical activity program launched by the National Dairy Council and the NFL in collaboration with the USDA, to help encourage students to live healthier lives. The grant Stanton received was for $10,000.

Through a fundraising campaign by parent group Stanton Community Partners, grants, and partnerships, Stanton was able to provide its K-8 students with a new schoolyard. The schoolyard includes a playground on its western side, a turf play area on its eastern side, outdoor classroom space, garden and track.

“In the new playground space, we work on all kinds of fitness things,” said gym teacher Zach Stroup. “The track is a huge help because it helped the kids get used to track. We actually took a group to the Penn Relays qualifying trials this year. The turf area is really great because we can play anything like Frisbee, football, soccer, kickball and dodge ball.

“Having the playground helps a lot with having the kids have unstructured play like they do at recess,” he added. “When the playground first opened, I would use gym time to get the students acclimated to the new playground and how to use everything safely. The kids are out here everyday for recess and twice a week for 45 minutes for gym, depending on the class. With the playground, we’re able to introduce a lot more fitness and recess programs with the kids.”

During the Tribune’s Learning Key visit, kindergarten teacher Rachel Jamerson was using the outdoor classroom to finish up her lesson on butterflies.

“We’ve done a lot of read-aloud which introduced butterflies to the students,” Jamerson said. “We talked about the different types of butterflies and then we focused on the life cycle. At the culmination of the lesson, we released four butterflies. We started off with five caterpillars, but one didn’t make it. I wanted the kids to be able to see life stages of animals and insects in real time.

“The students loved this lesson,” she added. “A lot of the time, we just have books. We don’t actually have hands on material for students to actual see. I think students retain the information a lot more when they can see it and interact with it than just seeing it on paper.”

Before Jamerson released the butterflies for her class, she read the students the book “The Caterpillar and the Polliwog” by Jack Kent.

“The book was OK, but it had some mistakes in the book,” said kindergartner Gionna Townsend. “I do like that Ms. Jamerson read to us before releasing the butterflies. One of the things that I saw was that the butterflies actually changed colors. At first, they were grey, white and black. The ended up changing to orange and black.”

Kindergartener Ashton Montley said he learned a lot about butterflies.

“One of the things I liked about learning about the butterflies was seeing them grow from a caterpillar into a butterfly,” Montley said. “It was really cool to see.”