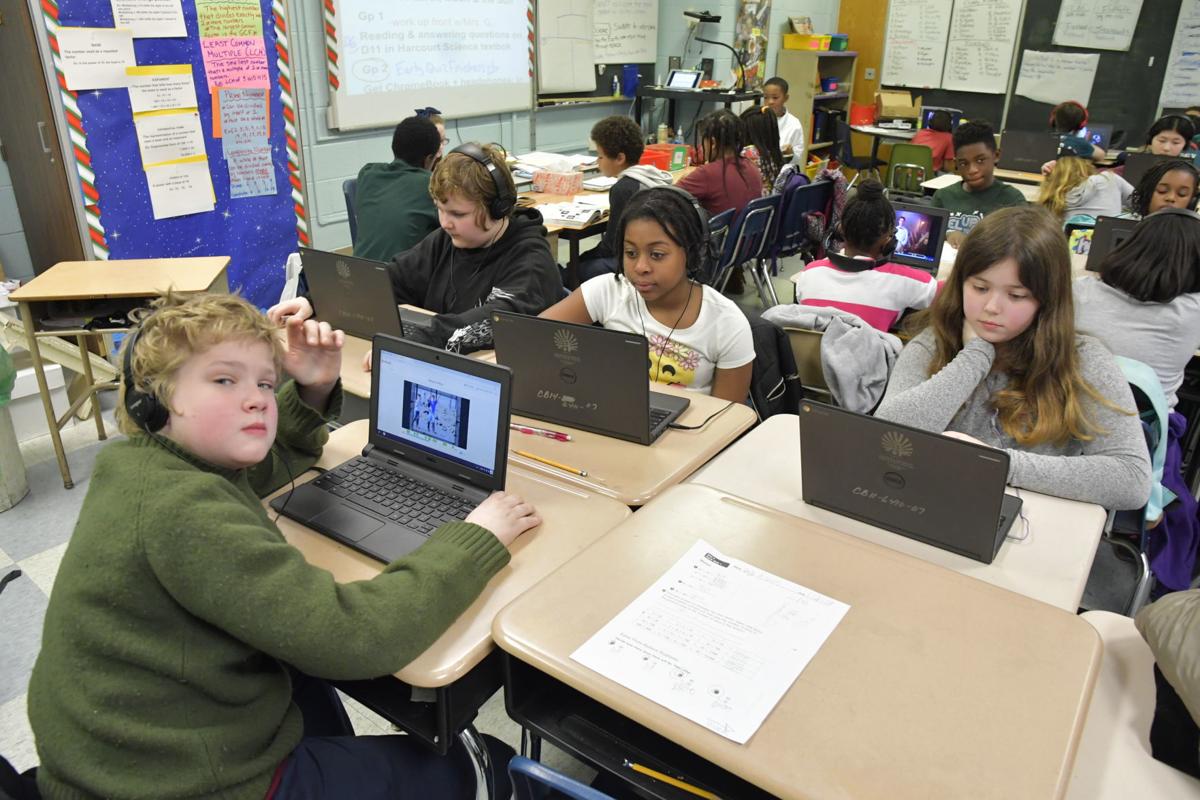 Students work on their computers in class. 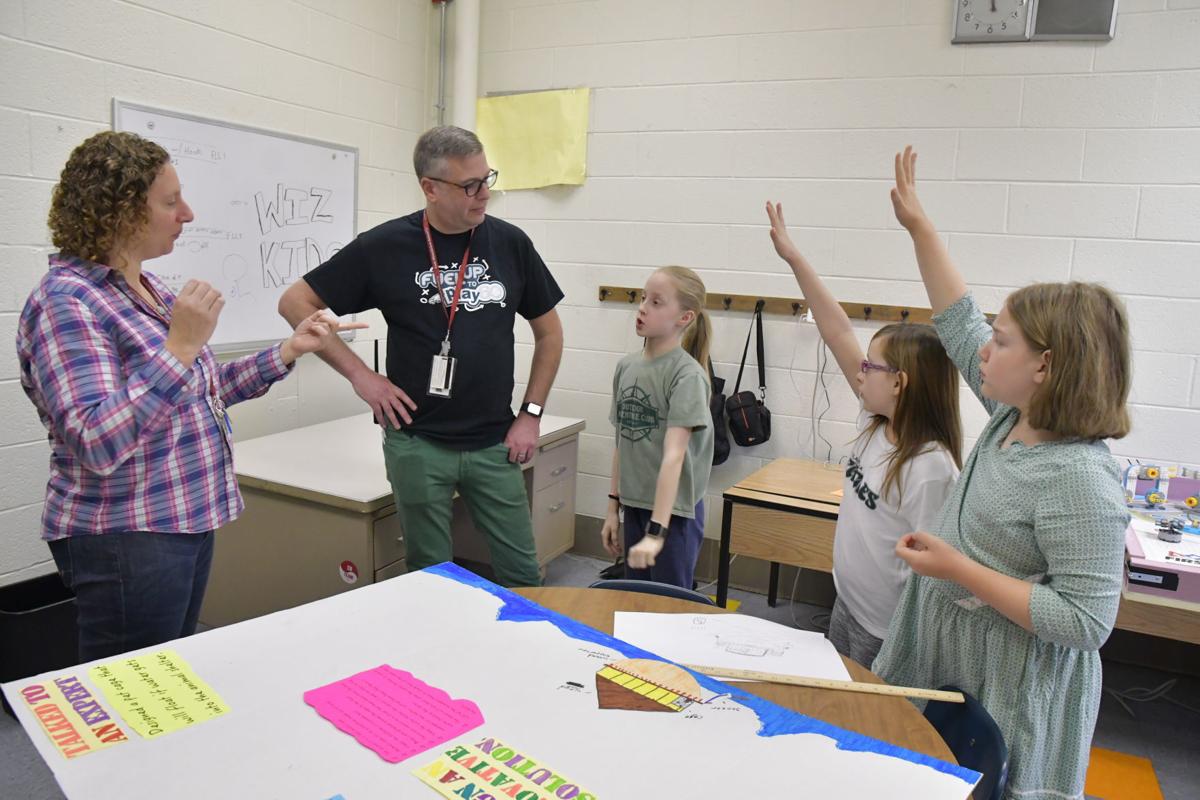 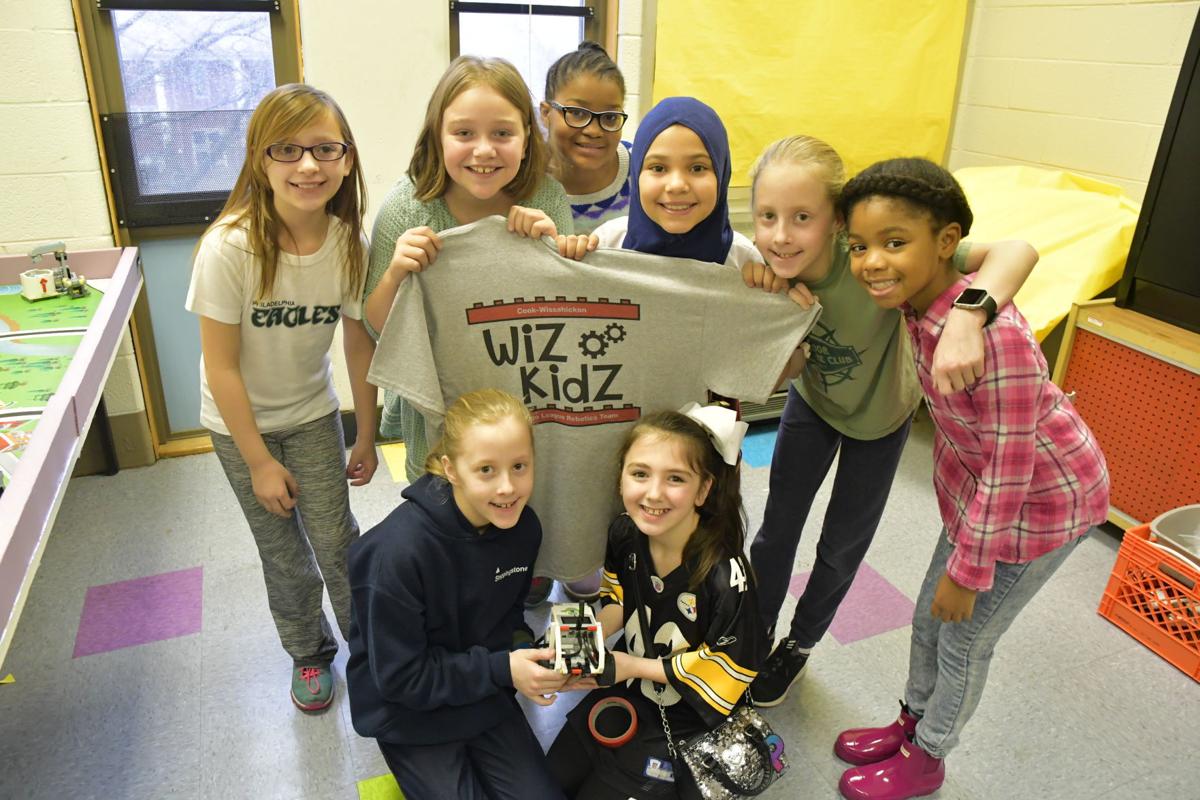 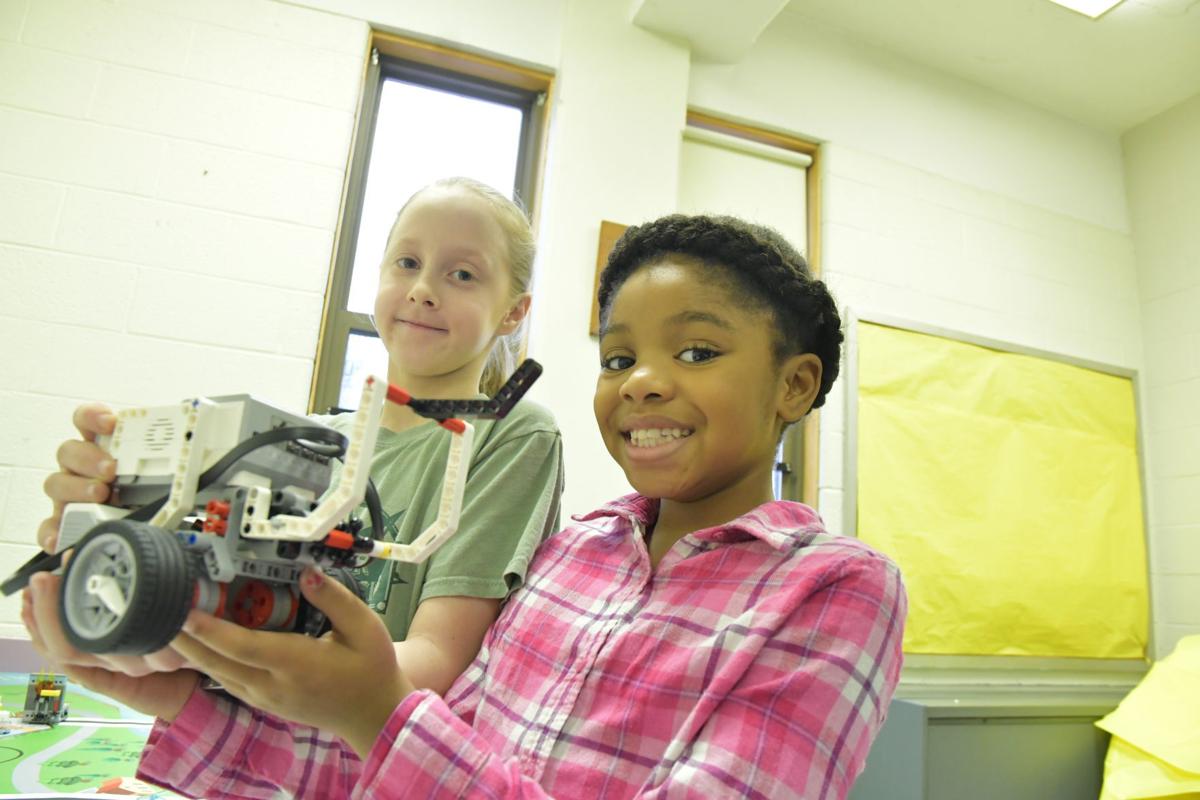 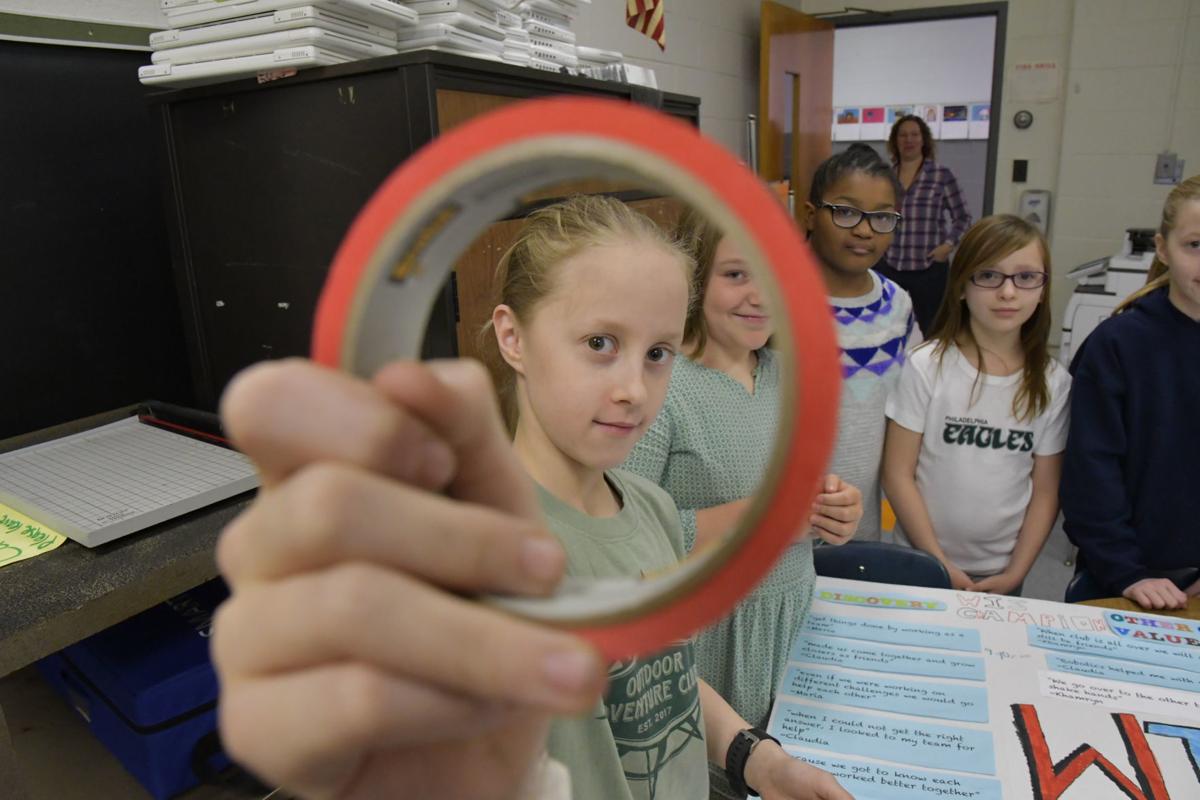 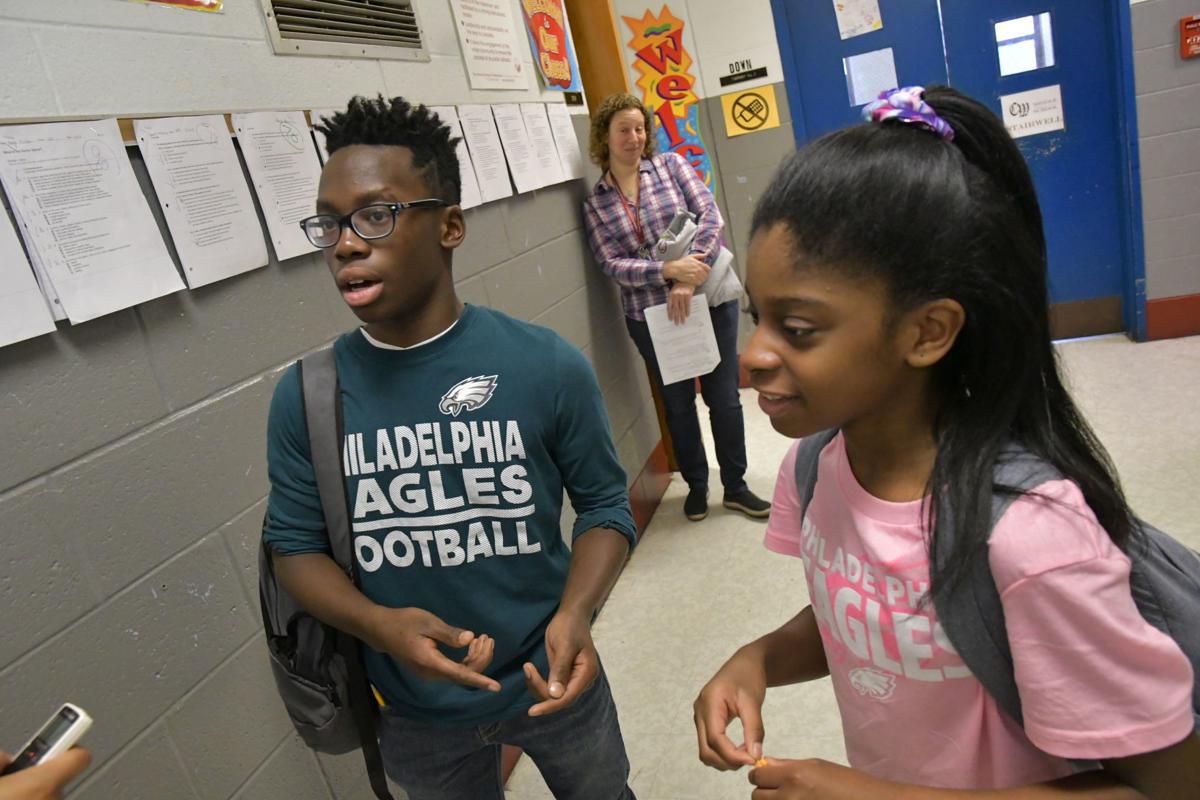 Seventh-graders Khai’e Davies and Khamani Davies talking about the science projects in the hallway. — PHOTOS BY ABDUL SULAYMAN/TRIBUNE CHIEF PHOTOGRAPHER

Students work on their computers in class.

Seventh-graders Khai’e Davies and Khamani Davies talking about the science projects in the hallway. — PHOTOS BY ABDUL SULAYMAN/TRIBUNE CHIEF PHOTOGRAPHER

At Cook-Wissahickon School, students are learning more than writing, science and math. They are learning how to create projects digitally, how to code and how to build and program robots — lessons that show how their education relates to everyday life and how it will prepare them for their future.

“We don’t just want our kids to learn how to use the computer, but we want them to learn everything technology has to offer,” said principal Michael Lowe. “We want them to use technology productively like how to use word processing and spread streets to enhance their projects. This year, we’re really hitting our stride with coding and robotics.

“Our middle school girls are involved with Tech Girls, so they go to Roxborough High School and meet with different groups over there. We have Saturday programming classes for girls. In our new computer lab students aren’t just accessing technology, but they are learning skills. We’re also part of the district’s blended learning initiative.

“We realize and our parents realize that technology is a huge part of our kids’ future,” he added. “The direction of jobs will continue to grow in the area of STEM, so we want to make sure that we do everything that we can to prepare our students for their future and I believe we’re starting to do that through our programs.”

Each year, Cook-Wissahickon students participate in a science fair. However, instead of using cardboard posters to display their projects, this year the students had to use a digital platform.

“All of our kids in grades four to eight had to present their projects on their Chromebooks to a pair of judges,” Lowe said. “They had to create slides that had research, data and graphs on their laptops. When it was their time to present, they went into their Google account and pulled up their presentation and presented their project from their computer.”

Fifth-grader Emma Pflug did her project on a solar power oven. Pflug placed aluminum foil inside of a pizza box in order for the sun to reflect off the foil and cook the food.

“I realized while doing my project that it had to be really sunny outside in order for it to work,” Pflug said. “I actually used my Chromebook a lot for my project. In addition to research, I had to put all of my information on Google slides. The hardest part for me was plugging in the data, but it all worked out in the end.”

“My project was challenging because I had to do different trials,” Hasben said. “I have a Chromebook at home so it was easier for me to use it because all I had to do was transfer my information for my project to my Chromebook at school. It was a lot of work, but I’m glad we did it this way because I’m probably going to have to do more projects like this in the future.”

During the Tribune’s Learning Key visit, several fourth-grade students were preparing for their first trip to the First LEGO League (FLL).

“This is our first time competing in the FLL, so we’re learning that when you work together as a team it will help you be successful with your activity,” said fourth-grader Uylre Jackson. “I’m looking forward to interacting with other teams and showing everyone what our team, the Wiz Kidz, came up with.”

Supported by the University of Pennsylvania, FLL teams research real-world problems such as food safety, recycling or energy and are challenged to develop a solution. They must design, build and program a robot using LEGO MINDSTORMS technology, then compete on a table-top playing field.

“I meet with the girls mostly after school, twice a week,” said computer science teacher Rebecca Brown. “The challenge is compromised into three parts, which include core values, the project and the robot game. For each part, the kids have to present in front of the judges.With the core values, we had to teach the kids how to be polite to each other, share, and work as a team.

“Every year there is a theme for the challenge and this year’s theme is water. The students had to identify a water problem and try to solve it. The problem they had to solve was based around an animal shelter.

“They had to figure if the shelter floods, how can they save the animals,” she added. “The students ended up designing a floatable animal cage that has sensors and buoys on it. That’s part two of the competition. As far as the robot game, the kids had to build a robot, learn how to program it and complete missions.”

Fourth-grader Payton Birkmire says her interest in robots made her want to join the team.

“I wanted to be a part of this program because I thought it would be pretty cool to be working with robots,” Birkmire said. “I wanted to program them and see how they actually work. The biggest thing I learned through this process is that we all have to work together to make things work.”

Fourth-grader Maiyah Tippins said no matter what place they come in, to her, they are already winners.

“This is our first year doing something this and we’ve accomplished a lot together as a team,” Tippins said. “We’ve learned how to build a robot and as a group, we’ve become close friends. No matter where we place, it doesn’t take away from what we did together as a group.”