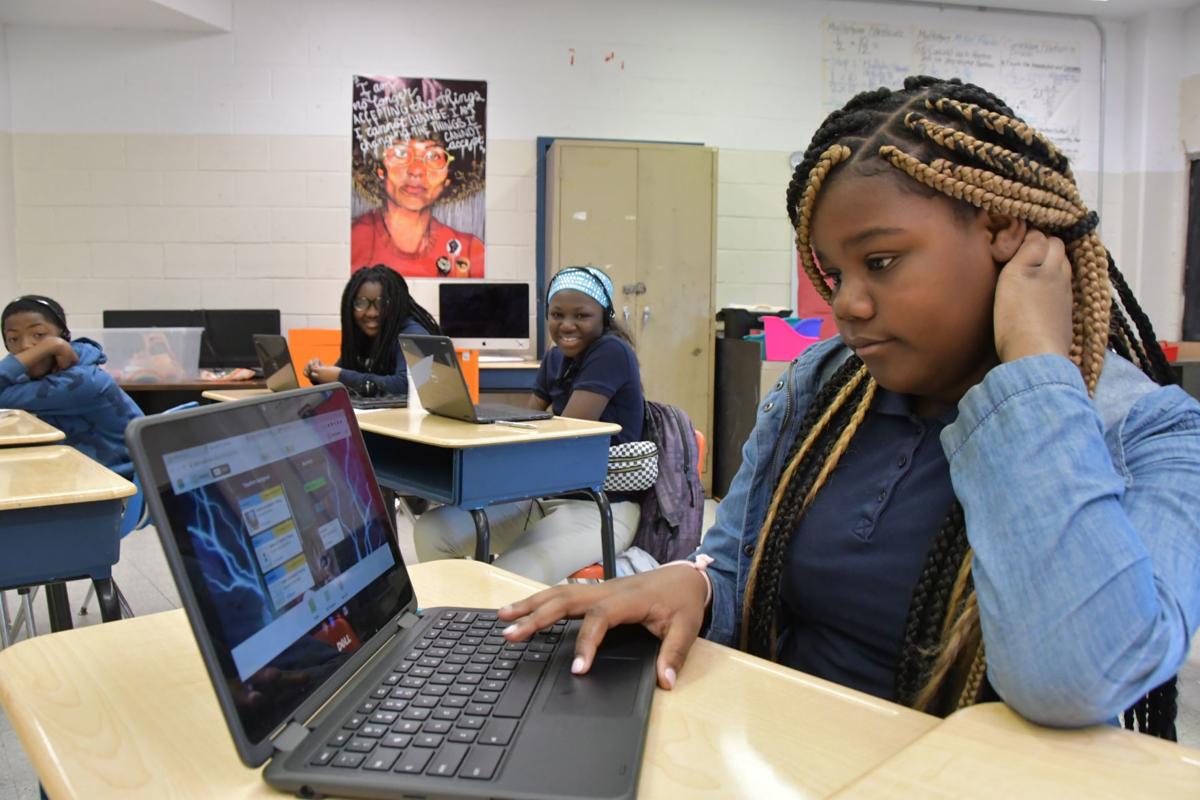 Sianni Ross works on a laptop in math class. 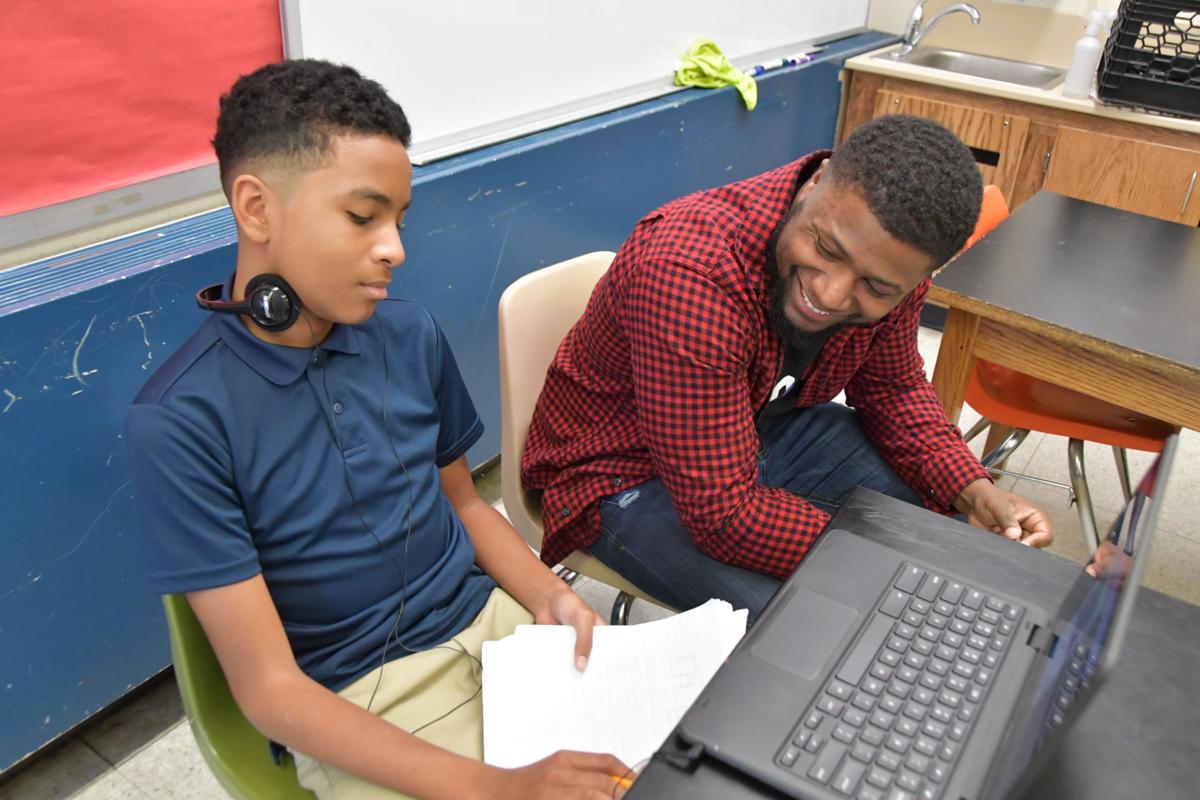 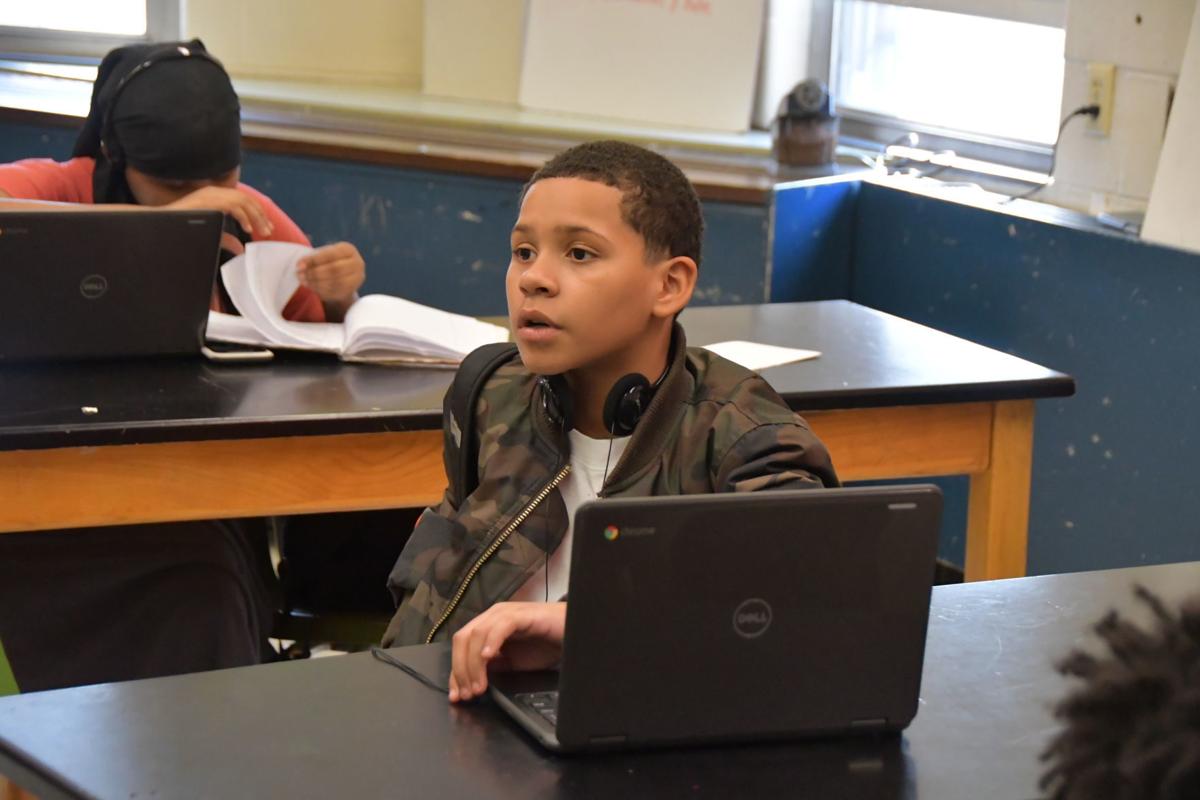 Sincere Rodriguez sits behind his laptop in math class. 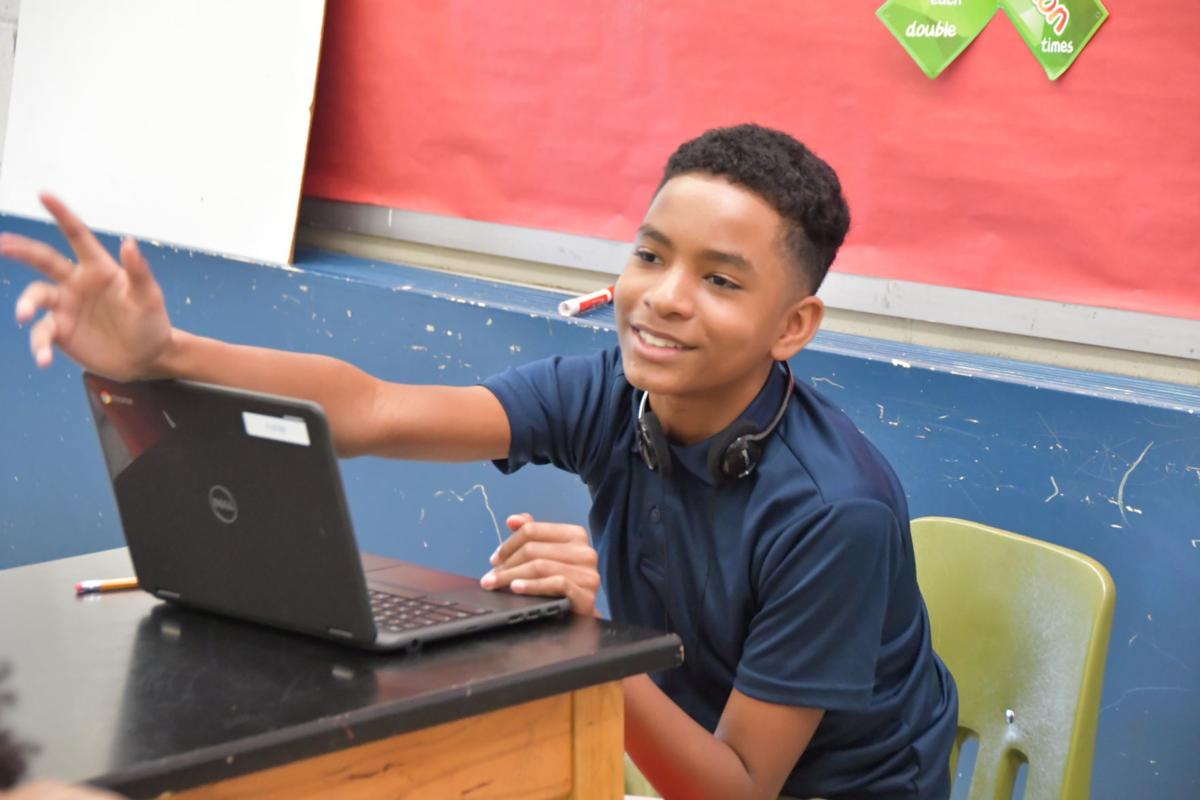 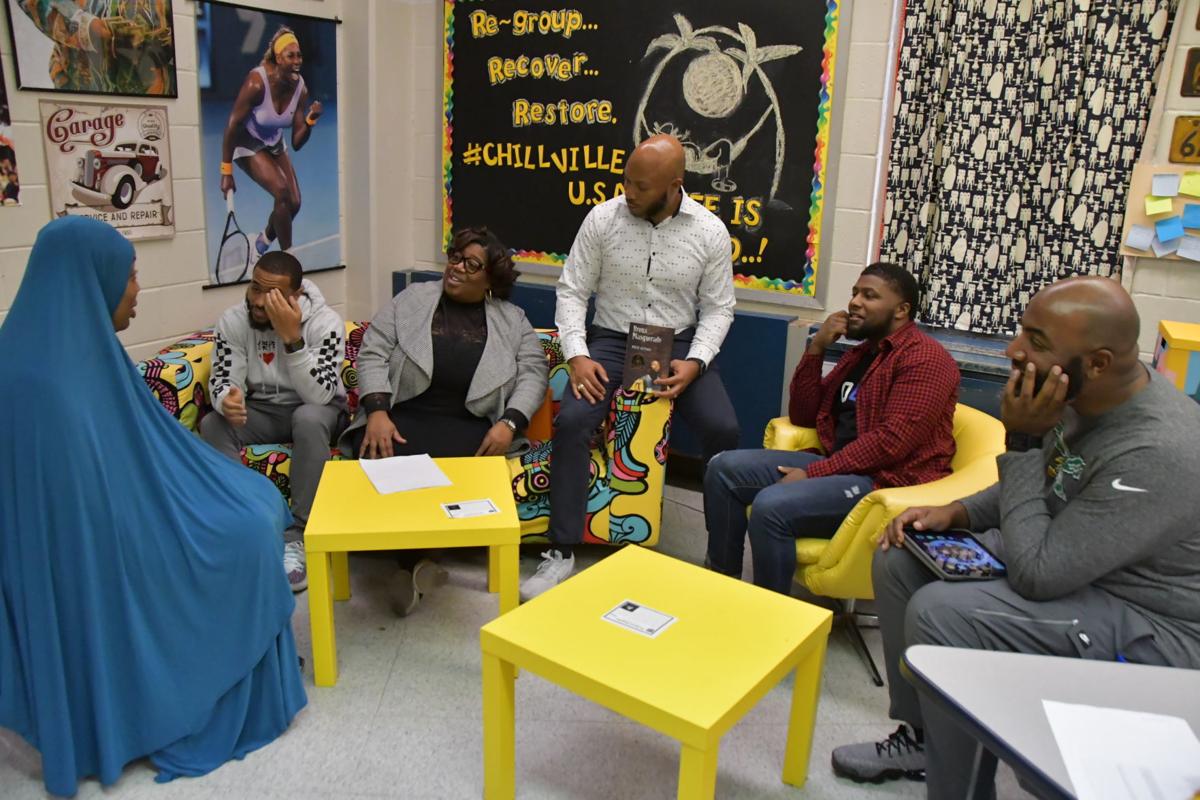 Chavonne Campbell along with with Quamiir Trice, principal Aliya Catanch-Bradley, Herman Douglas, Shakoor Henderson and Charles Williams have a conversation with each other. 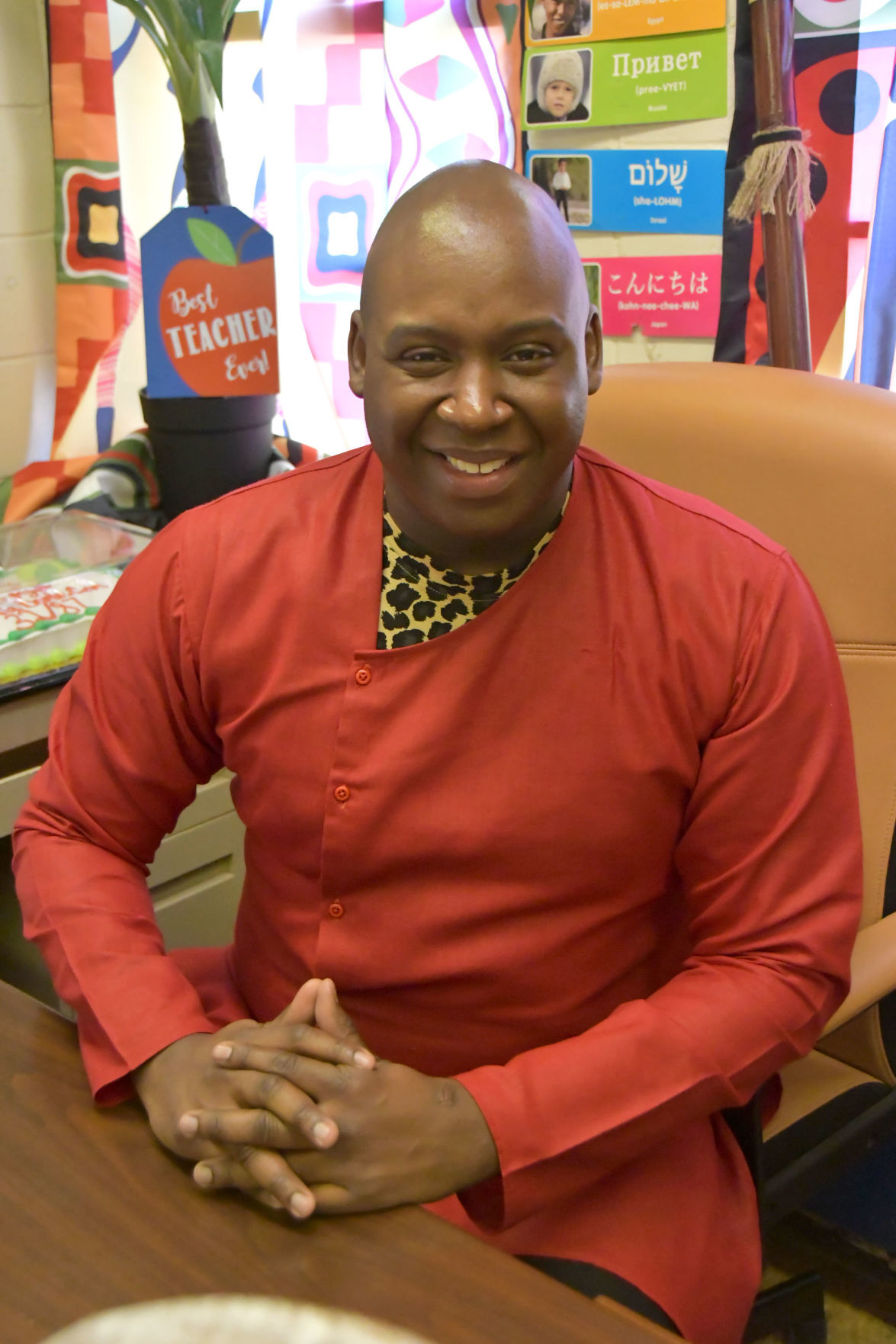 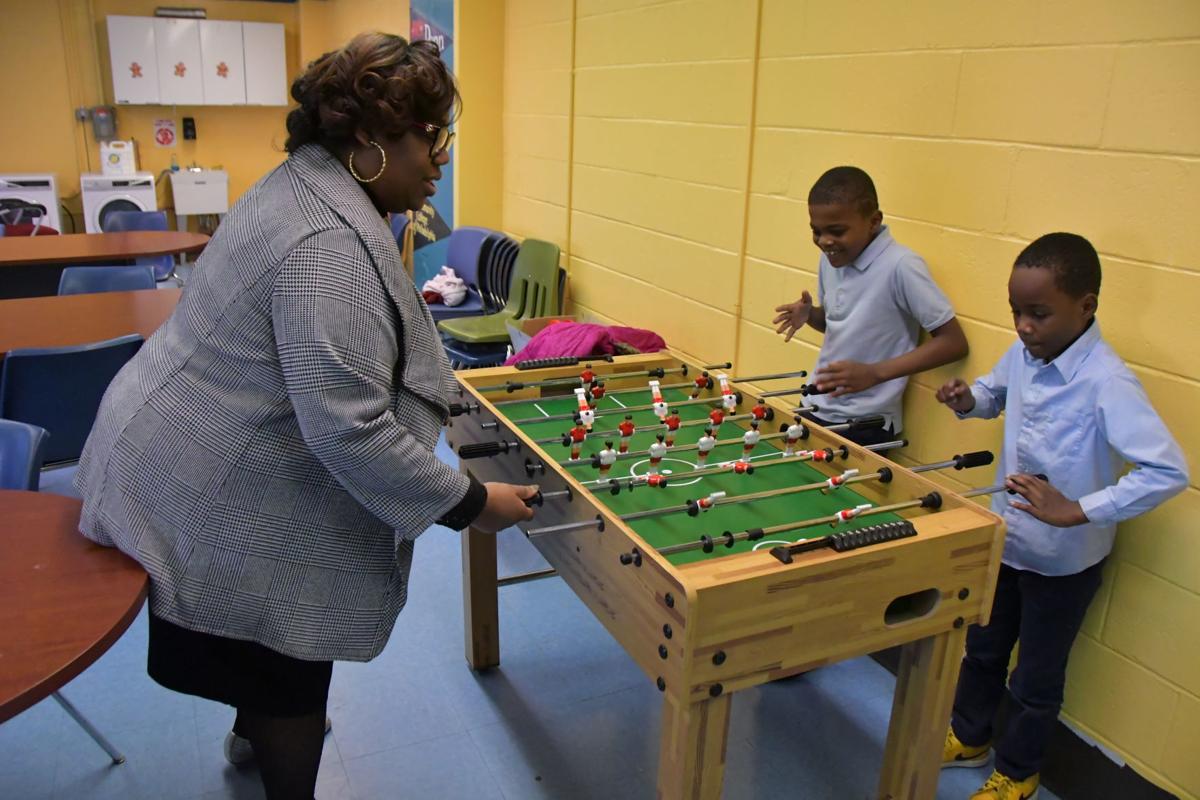 Sianni Ross works on a laptop in math class.

Sincere Rodriguez sits behind his laptop in math class.

Chavonne Campbell along with with Quamiir Trice, principal Aliya Catanch-Bradley, Herman Douglas, Shakoor Henderson and Charles Williams have a conversation with each other.

The success of the Mary Mcleod Bethune Elementary School does not just rely on the students’ academic excellence and personal growth.

The teachers, parents, staff, and faculty at the Pre-K-8 school at 3301 Old York Road also play a pivotal role by providing students with endless opportunities they might not receive anywhere else.

At Bethune, 43 percent of the teachers are Black men, the most in the School District of Philadelphia. A study from Johns Hopkins University published by the National Bureau of Economic Research found that Black students who have one Black teacher by third grade are 13 percent more likely to enroll in college. Those who have more than one teacher who looks like them are 32 percent more likely to do so.

“We have so many people at the school who look like the children that they teach,” said principal Aliya Catanch-Bradley. “Through that, the kids are able to see things differently by seeing what they could aspire to be. They are represented throughout this whole building and it’s something we are truly proud of.

“Bethune is a school with a social justice lens fighting for instructional strategies for all children, especially children of color,” she added. “We want to create an atmosphere where the students are not only learning about social justice and African-American history, but we also want to make sure that they have a love for learning and a love for self. “Enter to learn, Depart to serve.” That’s what we want to have each one of our children here ready to do.”

With nearly 600 students at Bethune, Catanch-Bradley said the school makes it a priority to provide the students with the tools to succeed, not just academically but personally.

“I don’t care what the demographics are in terms of poverty,” Catanch-Bradley said. “Every child here has something to give. It’s our job to help find it, cultivate it, and help them achieve whatever their goals and aspirations are. We have to make sure to give them the right tools, so that they can access those things.

“James Baldwin once said that ‘Those who said that things can’t be done are often interrupted by those doing it.’ I believe that our job here is to disrupt and to make things better. What I want our students to take away from their experiences at Bethune is that they are loved, safe, and appreciated.

“They have the ability to become anything they dream to be,” she added. “We want them to read and write on grade level. We also want them to do the math that’s needed so that they have access to all the high school options that they desire. We want them leaving this experience better than when they came in. If we can do that, then we’re off to a really good start.”

Entering his second year as a seventh grade math teacher at Bethune, Shakoor Henderson said in addition to his students learning percentages, ratios, and integers, he also makes sure his students know the importance of learning math and solving problems.

While Henderson considers his teaching style a little unorthodox, he says that he has noticed a difference in his students since conducting the class his way.

“My classes are very student driven and hands-on,” Henderson said. “At times we sing, dance, or make up a song in my class, but it always correlates with math. Sometimes students may need another way of doing things in order to get a concept they’re learning. Some kids are visual learners while other kids it’s easier if they write it out or conceptualize it.

“What was hard for me last year, was getting that hands on part translated to paper,” he added. “This year, that’s something we’re really good at now. I’ve seen a big difference in my students.”

Deighton Boyd teaches African American Studies for all grades at Bethune. He said that through the concept of modification, adaptation, and differentiation he’s been able to use similar content throughout all of his lessons despite the grade level.

“The middle-schoolers are also covering Ancient Egyptian studies on a more in depth level. We’re looking at the mummification process and taking a deeper perspective on the different Pharaohs during the 30 dynasties. We will have a current event period where we will discuss the sociology of the events that are taking place within the African-American community. We will also look at the social justice lens as well.