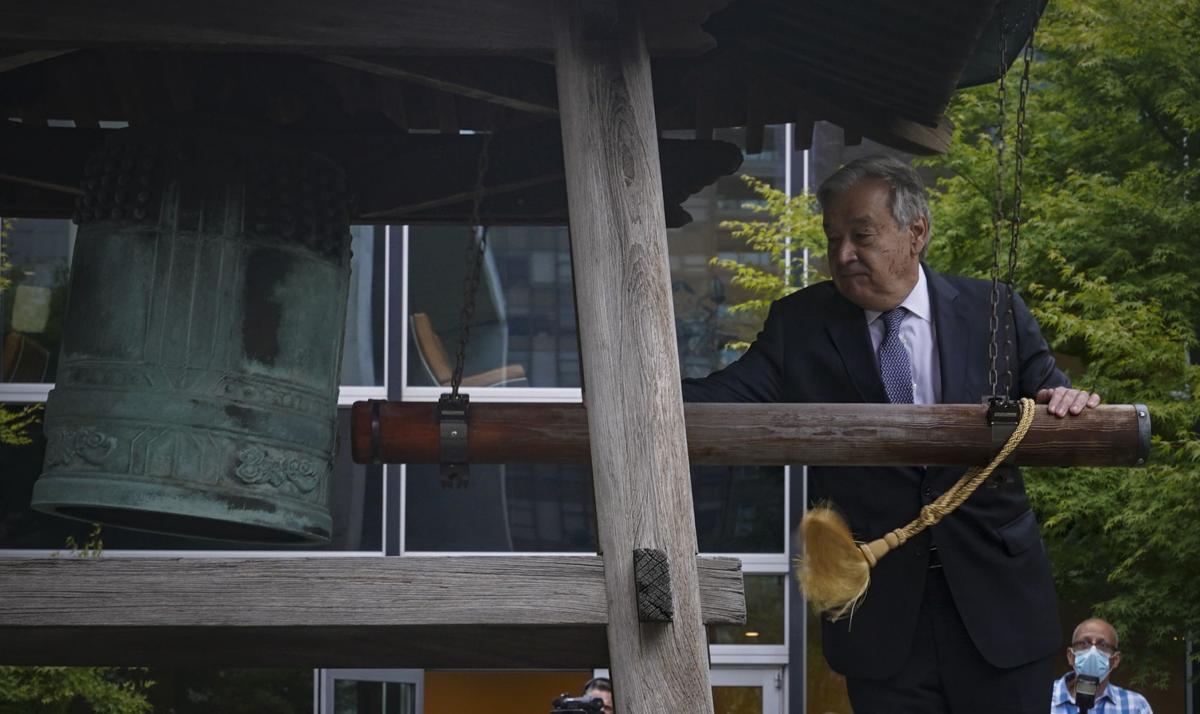 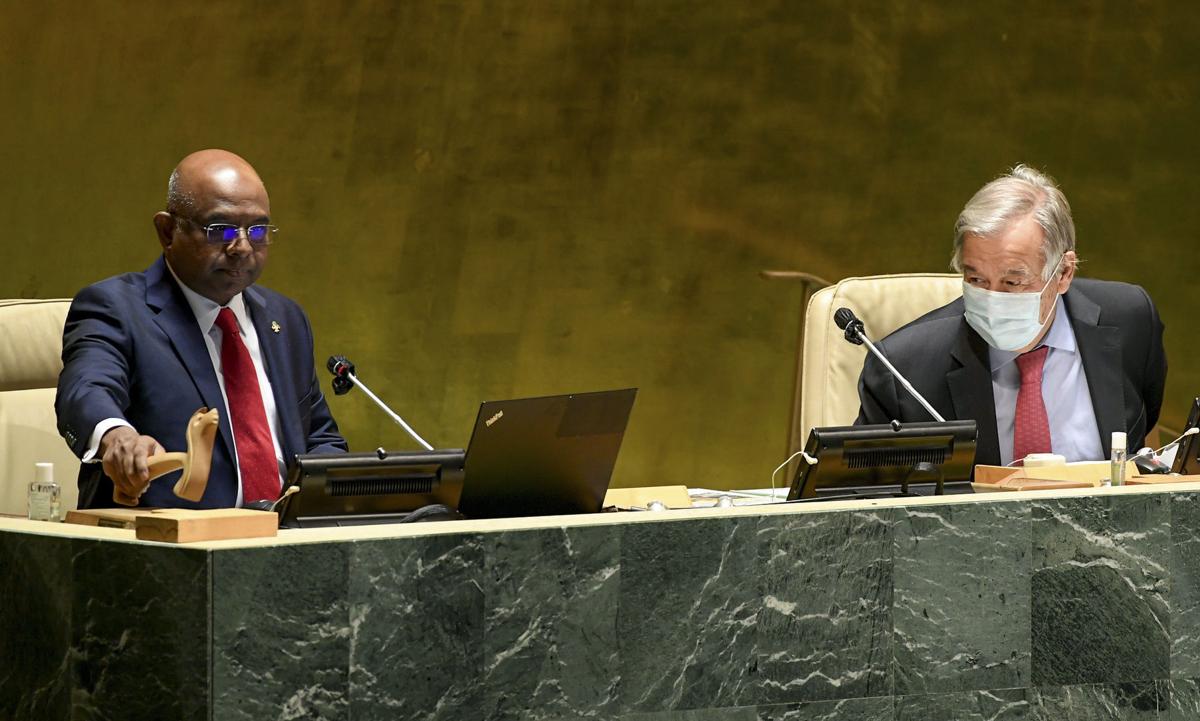 Abdulla Shahid of the Maldives, left, pounds the gavel signaling his start as the new president of the 76th session of the United Nations General Assembly, accompanied by Secretary-General António Guterres at U.N. headquarters on Tuesday, Sept. 14, 2021. — Evan Schneider/United Nations via AP) 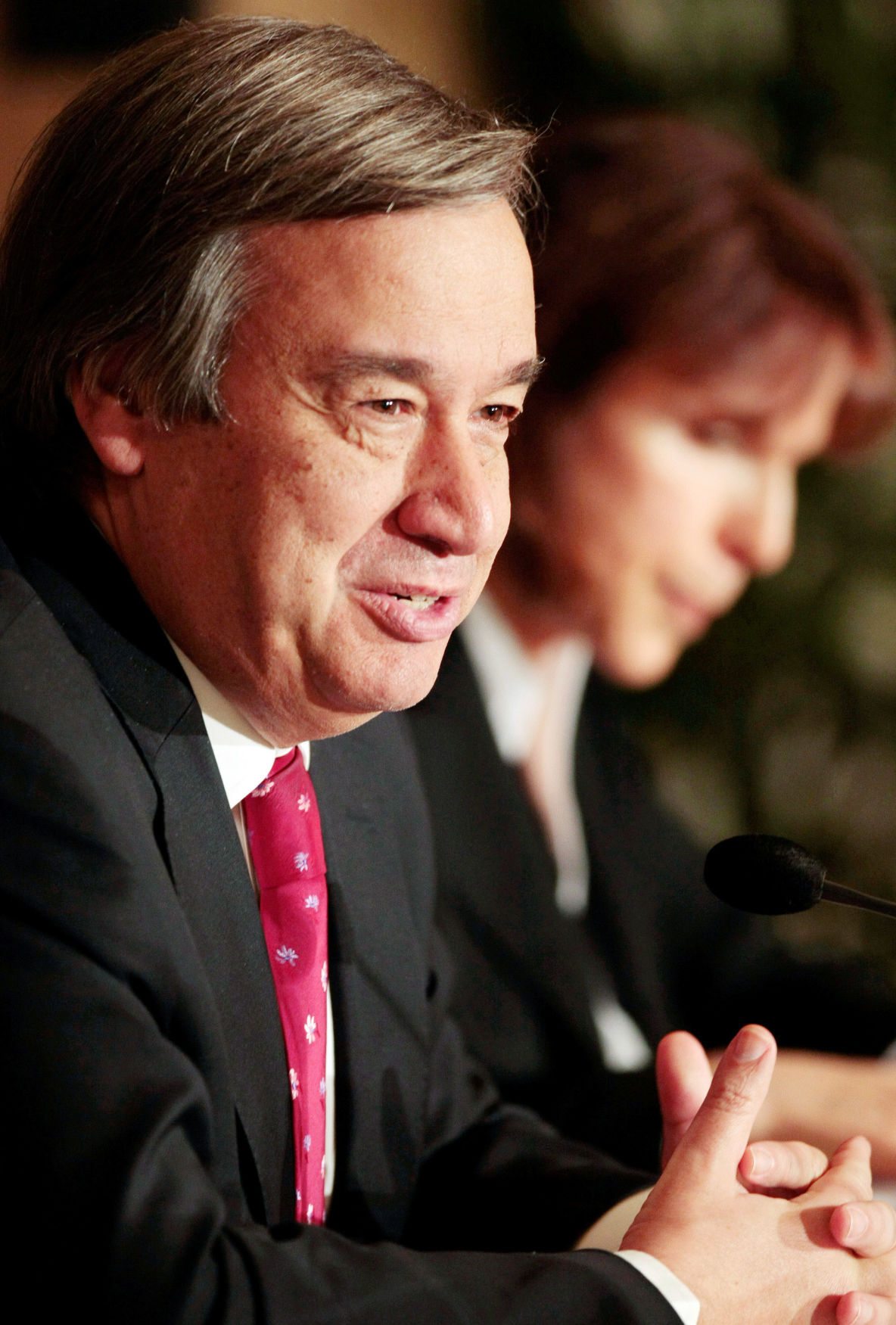 U.N. Secretary-General Antonio Guterres implores US. and China to repair their "completely dysfunctional" relationship so their disagreements won't disturb the planet. In this 2008 photo, Guterres was U.N. High Commissioner for Refugees. — AP Photo/Itsuo Inouye

Abdulla Shahid of the Maldives, left, pounds the gavel signaling his start as the new president of the 76th session of the United Nations General Assembly, accompanied by Secretary-General António Guterres at U.N. headquarters on Tuesday, Sept. 14, 2021. — Evan Schneider/United Nations via AP)

U.N. Secretary-General Antonio Guterres implores US. and China to repair their "completely dysfunctional" relationship so their disagreements won't disturb the planet. In this 2008 photo, Guterres was U.N. High Commissioner for Refugees. — AP Photo/Itsuo Inouye

UNITED NATIONS — Warning of a potential new Cold War, the head of the United Nations implored China and the United States to repair their “completely dysfunctional” relationship before problems between the two large and deeply influential countries spill over even further into the rest of the planet.

U.N. Secretary-General Antonio Guterres spoke to The Associated Press this weekend ahead of this week’s annual United Nations gathering of world leaders — a convening blemished by COVID, climate concerns and contentiousness across the planet.

Guterres said the world’s two major economic powers should be cooperating on climate and negotiating more robustly on trade and technology even given persisting political fissures about human rights, economics, online security and sovereignty in the South China Sea.

“Unfortunately, today we only have confrontation,” Guterres said Saturday in the AP interview.

“We need to re-establish a functional relationship between the two powers,” he said, calling that “essential to address the problems of vaccination, the problems of climate change and many other global challenges that cannot be solved without constructive relations within the international community and mainly among the superpowers.”

Two years ago, Guterres warned global leaders of the risk of the world splitting in two, with the United States and China creating rival internets, currency, trade, financial rules “and their own zero-sum geopolitical and military strategies.”

He reiterated that warning in the AP interview, adding that two rival geopolitical and military strategies would pose “dangers” and divide the world. Thus, he said, the foundering relationship must be repaired — and soon.

“We need to avoid at all cost a Cold War that would be different from the past one, and probably more dangerous and more difficult to manage,” Guterres said.

The so-called Cold War between the Soviet Union and its East bloc allies and the United States and its Western allies began immediately after World War II and ended with the breakup of the Soviet Union in 1991. It was a clash of two nuclear-armed superpowers with rival ideologies — communism and authoritarianism on one side, capitalism and democracy on the other.

The U.N. chief said a new Cold War could be more perilous because the Soviet-U.S. antipathy created clear rules, and both sides were conscious of the risk of nuclear destruction. That produced back channels and forums “to guarantee that things would not get out of control,” he said.

“Now, today, everything is more fluid, and even the experience that existed in the past to manage crisis is no longer there,” Guterres said.

He said the U.S.-Britain deal to provide Australia with nuclear-powered submarines so it could operate undetected in Asia “is just one small piece of a more complex puzzle ... this completely dysfunctional relationship between China and the United States.” The secretly negotiated deal angered China and France, which had signed a contract with Australia worth at least $66 billion for a dozen French conventional diesel-electric submarines.

The White House gently pushed back against Gutterres’ critique on Monday. Press secretary Jen Psaki said the administration disagrees with Gutterres’ characterization of the U.S.-China relationship. “Our relationship with China is one not of conflict but of competition,” Psaki said. She added: “He is not looking to pursue a new Cold War with any country in the world.”

Biden, in his address before the General Assembly on Tuesday, will underscore that he doesn’t believe in “the notion of a new Cold War” in which the world divided into blocs, according to a senior administration official. That official, who spoke on the condition of anonymity to preview Biden’s speech, said Biden will make the case that vigorous competition between the two nations is possible without tipping into conflict.

In the wide-ranging AP interview, Guterres also addressed three major issues that world leaders will be confronting this week: the worsening climate crisis, the still-raging pandemic and Afghanistan’s uncertain future under its new Taliban rulers. They took power Aug. 15 without a fight from the government’s U.S.-trained army as American forces were in the final stage of withdrawing from the country after 20 years.

What role will the United Nations have in the new Afghanistan? Guterres called it “a fantasy” to believe that U.N. involvement “will be able all of a sudden to produce an inclusive government, to guarantee that all human rights are respected, to guarantee that no terrorists will ever exist in Afghanistan, that drug trafficking will stop.”

After all, he said, the United States and many other countries had thousands of soldiers in Afghanistan and spent trillions of dollars and weren’t able to solve the country’s problems — and, some say, made them worse.

Though the United Nations has “limited capacity and limited leverage,” he said, it is playing a key role in leading efforts to provide humanitarian aid to Afghans. The U.N. is also drawing the Taliban’s attention to the importance of an inclusive government that respects human rights, especially for women and girls, he said.

“There is clearly a fight for power within different groups in the Taliban leadership. The situation is not yet clarified,” he said, calling it one more reason why the international community should engage with the Taliban.

While former U.S. president Donald Trump was wedded to an “America First” policy, President Joe Biden — who will make his first appearance as chief executive at the General Assembly’s high-level meeting Tuesday — has reaffirmed U.S. commitment to multilateral institutions.

Guterres said Biden’s commitment to global action on climate, including rejoining the 2015 Paris climate agreement that Trump withdrew from, is “probably the most important of them all.”

Guterres also lamented the failure of countries to work together to tackle global warming and ensure that people in every country are vaccinated.

Of the past year of COVID-19 struggles, he said: “We were not able to make any real progress in relation to effective coordination of global efforts.”

And of climate: “One year ago, we were seeing a more clear movement in the right direction, and that movement has slowed down in the recent past . So we need to re-accelerate again if we are not going into disaster.”

“It’s completely stupid from the point of view of defeating the virus, but if the virus goes on spreading like wildfire in the global south, there will be more mutations,” he said. “And we know that mutations are making it more transmissible, more dangerous.”

He again urged the world’s 20 major economic powers in the G20, who failed to take united action against COVID-19 in early 2020, to create the conditions for a global vaccination plan. Such a plan, he said, must bring together vaccine-producing countries with international financial institutions and pharmaceutical companies to double production and ensure equitable distribution.

“I think this is possible,” Guterres said. “It depends on political will.”

The secretary-general said rich, developed countries are spending about 20% of their GDP on recovery problems, middle income countries about 6% and the least developed countries 2% of a small GDP. That, he says, has produced frustration and mistrust in parts of the developing world that have received neither vaccines nor recovery assistance.