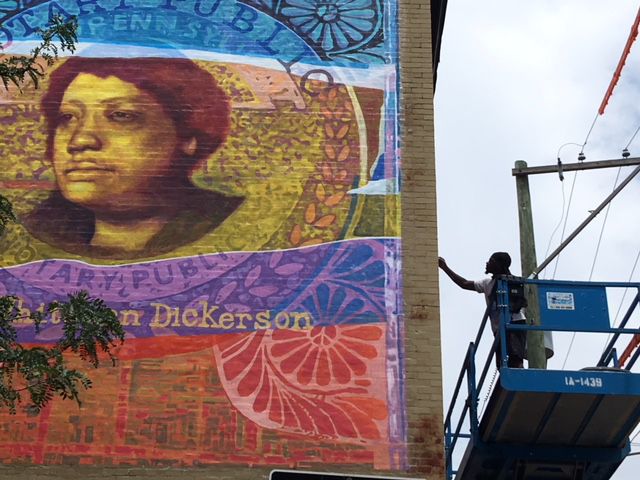 The mural of Addie Whiteman Dickerson is getting its final touches. 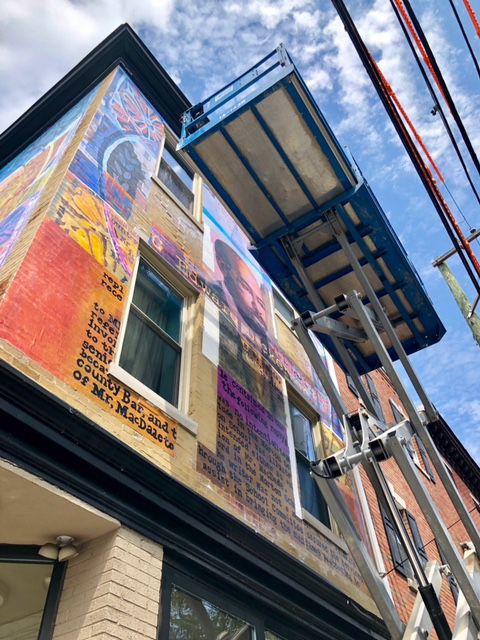 The artwork of Philadelphia Mural Arts Ernel Martinez shows the faces of the 1920s Philadelphia power couple G. Edward Dickerson and Addie Whiteman Dickerson who purchased the building at the corner of 16th and Bainbridge streets and left it to improve the Negro race.

The mural of Addie Whiteman Dickerson is getting its final touches.

The artwork of Philadelphia Mural Arts Ernel Martinez shows the faces of the 1920s Philadelphia power couple G. Edward Dickerson and Addie Whiteman Dickerson who purchased the building at the corner of 16th and Bainbridge streets and left it to improve the Negro race.

The artwork of Philadelphia Mural Arts’ Program muralist Ernel Martinez now graces the Art Sanctuary building at the corner of 16th and Bainbridge streets depicting the faces of a 1920s Philadelphia power couple – G. Edward Dickerson and Addie Whiteman Dickerson – who purchased the building and left it “to improve the Negro race.” The mural was completed in conjunction with Art Sanctuary’s 20th anniversary and the conclusion of the 34th Annual Celebration of Black Arts Festival.

“He incorporated icons from both of their professions,” said Art Sanctuary and Celebration of Black Arts Director Valerie Gay. “It is just so beautifully and sensitively done. It’s been great to see people from all walks of life while he was installing it, yelling up: ‘Wow, this is amazing!’”

Real estate broker, reformer, clubwoman, civic and political activist Addie Whiteman Dickerson was born in Wilmington, N.C., in 1878, to what was described by the National Association of Colored Women’s Clubs as “one of the section’s best known families.” According to “Notable Black American Women, Vol. II,” she educated at Gregory Institute, Scotia Seminary (later known as Scotia Women’s College) and the College of Collateral Teachers at the University of Pennsylvania. Dickerson was a real estate agent and the first Black female notary public. A publicity flyer from the late 1920s identifies Dickerson as “Philadelphia’s oldest Negro woman Real Estate Broker” and “Philadelphia’s First Negro woman Notary Public.”

She spent her adult life in Philadelphia, where she worked alongside her husband, G. Edward Dickerson, Esquire. “The Negro College Graduate” named Dickerson among the leading African American lawyers of the early 20th century. A native of Virginia, he was among the first Blacks to receive a law degree from Temple University in 1902 and comprised the second wave of Black attorneys to arrive in Philadelphia in the early 1900s.

“Mr. Dickerson was an Assistant City Solicitor [and also] represented Blacks throughout our South Philadelphia footprint who had difficulty finding housing in the area. He successfully sued the city for damages in a riot from two white police officers murdering a Black man – and that was in 1919. His wife, Addie Whiteman Dickerson, was also a formidable woman who was big in the suffrage movement, was a business woman, and represented Philadelphia in 1924 in Czechoslovakia during a suffrage conference. Together, their offices were in our building – hers was on the first floor and his was on the second floor – and they used the space to hold political rallies and artistic salons,” explained Gay in an earlier interview.

The Dickersons were civic, social and political activists who, upon their deaths in 1940 (she first, followed by him months later) left their legacy in the form of real estate. In John A. Saunders’ “History of the Philadelphia Negro, 1787-1963,” the family’s assets were estimated at about $100,000. Mr. and Mrs. Dickerson had one child, Edmund Whiteman, who died in 1914.

“Upon their death, they left the building in trust ‘to improve and uphold the Negro race,’” noted Gay. “That is why Art Sanctuary gets to use the building for one dollar a year. It also allows us to do the programming that we do, which is mostly free to the community.”