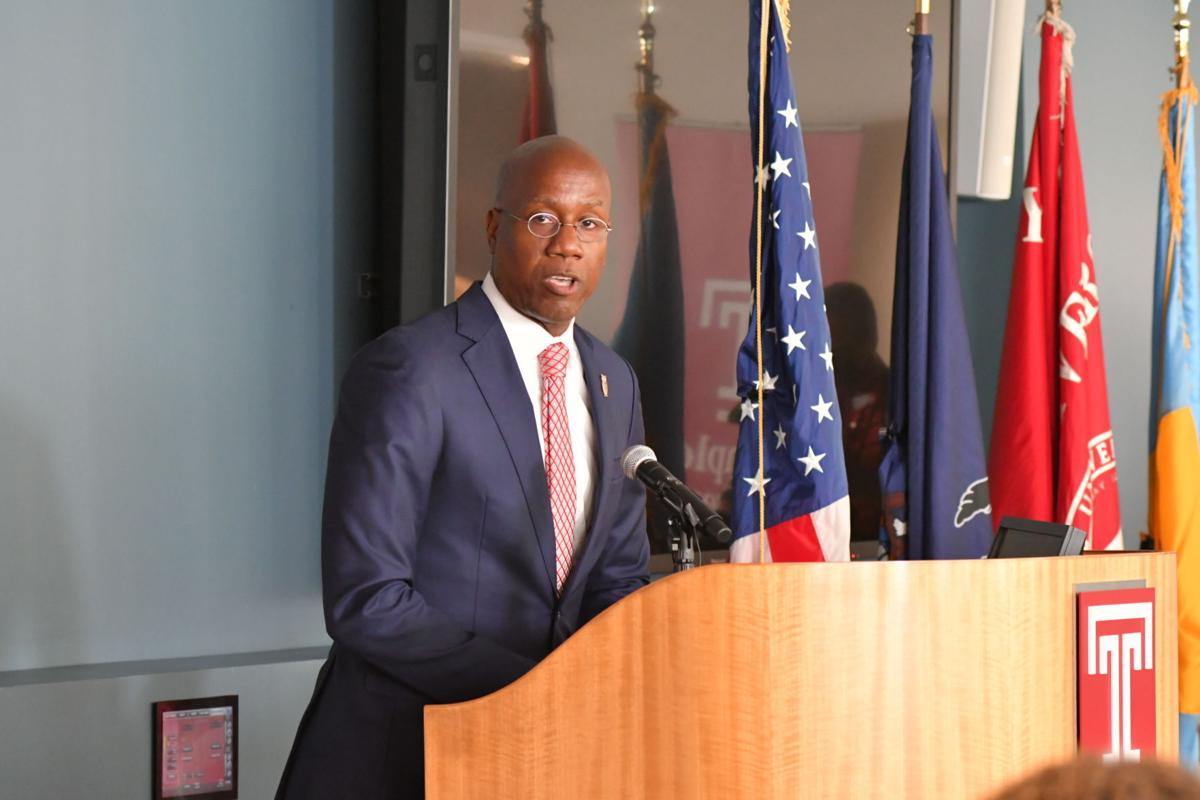 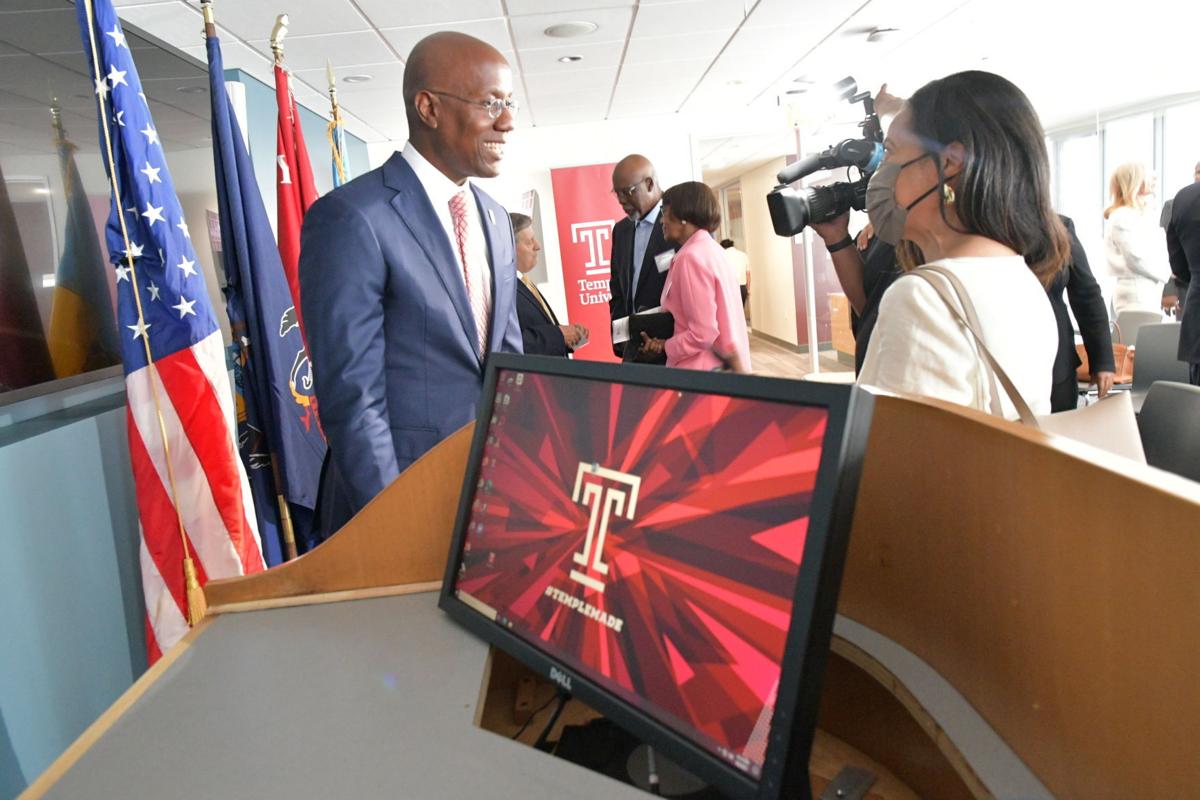 Jason Wingard talks with a reporter after the announcement of his new role as Temple’s president.—TRIBUNE PHOTO/ABDUL R. SULAYMAN

Jason Wingard talks with a reporter after the announcement of his new role as Temple’s president.—TRIBUNE PHOTO/ABDUL R. SULAYMAN

He started visiting Temple more than 40 years ago, when his father was a graduate student. He spent a significant amount of time interacting with faculty, students and security guards and playing basketball with the neighborhood kids.

“I had a long, long history with Temple and I really enjoyed that initial foundation,” Wingard said.

It’s where he met Temple basketball coach John Chaney, who became his idol. He participated in Chaney’s basketball camps and spent many summers playing ball in the summer league.

“I would spend hours with him listening to him talk about all the stories of leadership. He would say, ‘Young Wingard, you have two things to remember about being successful. No. 1, get up early. No. 2, work harder than your peers.’”

This week, Wingard was named the first African-American president in the university’s 137-year history. He officially begins his new post on July 1.

Wingard, who holds a doctorate in education leadership, previously served as dean emeritus and professor of human capital management at the Columbia University School of Professional Studies.

“While it is a historic appointment, his outstanding leadership skills and expertise are the most compelling,” Morgan said.

“His knowledge of organizational strategies, leadership development and the future of work will help guide our graduates as they compete in the working world to succeed in their working careers.”

Wingard was selected following a 10-month nationwide search led by an 18-member Presidential Search Committee appointed by the Board of Trustees. Temple was assisted in the process by Storbeck Search, a member of the Diversified Search Group.

“He has a vision for community involvement. He is deeply committed to community and to values. He is very student-focused, but he’s also a champion of innovation and so these things excited the search committee from the beginning and we are just excited today to welcome him to the Temple family.”

Wingard said he was drawn to Temple because of its level of excellence, its focus on equity and access and its innovation in learning.

Wingard plans to focus on three things when he begins his tenure at Temple.

“No. 1, I’ll particularly focus on being a chief ambassador where there is a level of excellence that Temple demonstrates through health care, through research and teaching and learning, through athletics and student services,” said the 49-year-old West Chester native.

“I want to bring a level of prioritization to telling the story about how good Temple has been doing and the wonderful successes that we have.”

Wingard also seeks to address the crisis facing the future of work.

“Pre-pandemic we were already starting to see how the workforce was being disrupted,” he said.

“Now post-pandemic it’s significantly unstable and so we don’t know as higher education institutions what the workforce will look like.

“Since we don’t know, we don’t have a clear sense of how we are going to be training our students to be prepared for it,” Wingard continued.

“So we’re going to have to be adaptable to that. We have to be innovative in how we structure our curriculum so they can be ready for it.”

One of his core areas is focusing on Temple engaging with the surrounding North Philadelphia community.

“We want to engage authentically with the community that surrounds us,” Wingard said.

Wingard will succeed President Richard M. Englert, who is retiring after 45 years with Temple. Englert led the institution nationally recognized as a center of excellence in teaching, research and excellence with more than 17 schools across eight campuses, 37,000 students and 8,700 faculty and staff.

“My years at Temple have taught me that this university is constantly evolving, while remaining true to its mission,” Englert said.

“I have every reason to believe that Dr. Wingard will find the faculty, staff and students excited for the future and ready to move the university forward. I wish him well and I look forward to working together to ensure a seamless transition.”

He previously was vice dean of the Wharton School at the University of Pennsylvania, where he led the Division of Executive Education. Wingard also was senior vice president of ePals Inc. and president/CEO of the ePals Foundation.

He has served as chief learning officer of Goldman Sachs and as founder and chairman of The Education Board Inc., a boutique management consulting firm specializing in executive coaching and corporate training.

He is on the board of directors of Kroll, a multinational financial consultancy firm, and is a strategic adviser for PepsiCo.

Wingard has lectured and written extensively on the topic of strategy, learning and leadership. His latest book, “The Great Skills Gap: Optimizing Talent for the Future of Work,” was released this week.

He and his wife, Gingi, live in Chestnut Hill with their children.

Temple University’s newly appointed President Jason Wingard is easily identifiable, and it is not just because of his 6-foot-4 stature. He’s a…