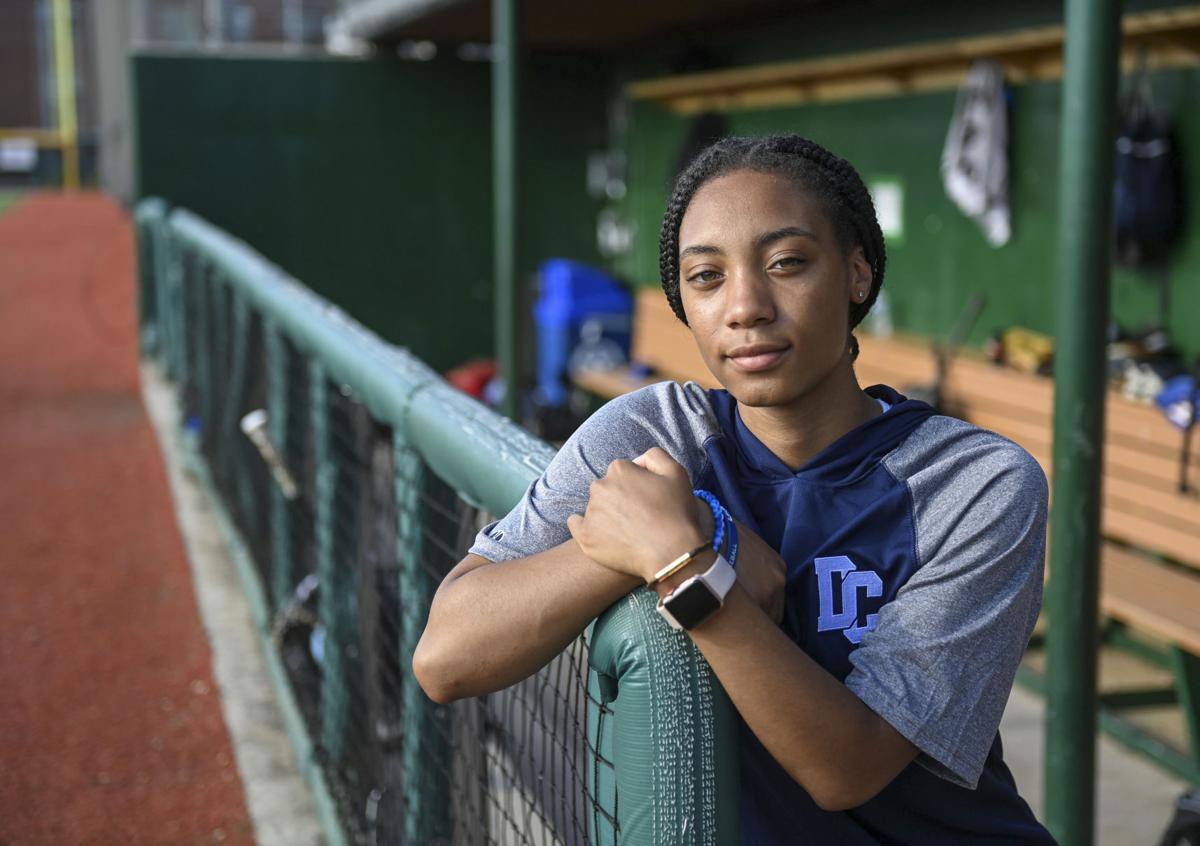 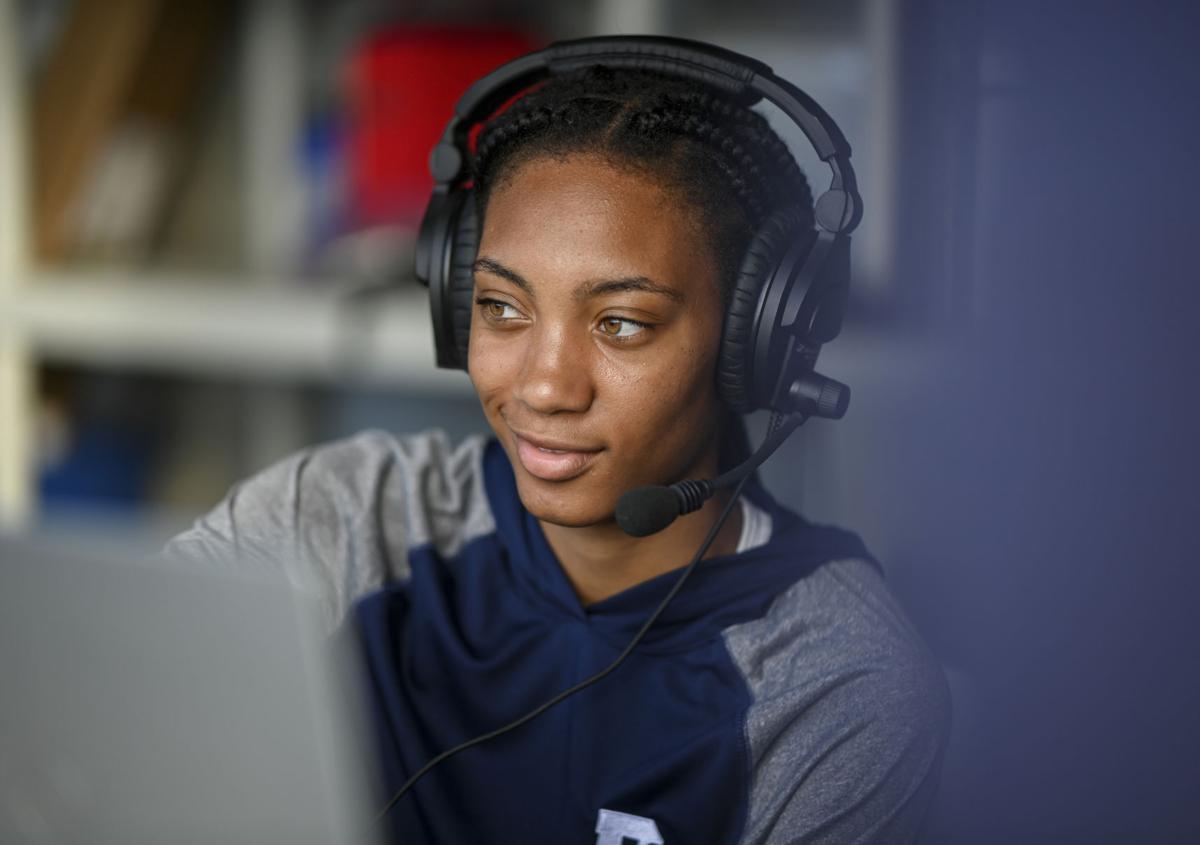 Mo’ne Davis, the former Little League star, is interning this summer with the DC Grays, a college summer baseball team.

Mo’ne Davis, the former Little League star, is interning this summer with the DC Grays, a college summer baseball team.

It was the bottom of the first, and 17 people were tuned in to the Facebook broadcast of the DC Grays, a college summer league team playing its season opener against the Silver Spring-Takoma Thunderbolts. With one out and the count 3-1, the voice of the most famous person on the grounds of the Washington Nationals Youth Baseball Academy came confidently over the Internet.

“Get that hitter’s count,” Mo’ne Davis said, “get the pitch you want — and just drive it.”

She is two weeks shy of her 20th birthday, a Hampton University student, an infielder on the softball team, a communications major and a budding sports broadcaster, “just practicing, trying to get better.” But she also has been on the cover of Sports Illustrated and Time, had a mini-documentary on her life produced by Spike Lee and published a memoir — “Remember My Name” — before she turned 15.

Monday night, in a cramped concrete press box at the top of the aluminum stands behind Field 1, she straddled both worlds — college kid anonymously preparing for her future and sports celebrity who, seven summers ago, became the first girl to throw a shutout and win a game at the Little League World Series.

Her broadcasting partner, Craige Smith, introduced her as “the infamous Mo’ne Davis,” because the Grays’ streaming online games may be mostly anonymous, but Davis is not. She hopes this internship with the Grays helps her hone the craft that could just take her beyond, “Mo’ne Davis, 13-year-old girl with a 70-mph fastball,” and make her, “Mo’ne Davis, professional sports announcer.”

“I just love being around sports, and being able to talk about them from my standpoint is really cool,” Davis said. “Especially sports that I’ve played, being able to see them from an outside perspective and relate them to people, it’s something I’d like to do in the future, something that I’m still working on.”

With Davis, the work has never been an issue.

“She really wants to do it,” said Steve Bandura, her longtime youth coach with the Anderson Monarchs in South Philadelphia. “She’s really excited to do it. She’ll find her voice and her style. She’s got a lot to add. She has a high sports IQ.”

You remember her name, right? That summer of 2014, when she led Philadelphia’s Taney Little League team to the Little League World Series, it was everywhere. She was a girl playing a game dominated by boys, but because she in turn dominated the boys — using that 70-mph fastball and a wicked curve to shut out a team from Nashville on two hits in the first round — she became nothing short of a cultural icon. Michelle Obama tweeted about her. Rachel Maddow talked about her. She met and chatted with everyone from Drake to Billie Jean King. It was, for anyone of any age, a lot.

“She’s one of the most levelheaded, cool people you’ll ever meet,” said Scott Bandura, a Grays outfielder who is Steve’s son, plays college ball at Princeton and was teammates with Davis in that historic summer — and years before. “So even at 13, it didn’t faze her at all. She just went about her life as normal. I don’t know how she did it, as hectic and crazy as it was. She didn’t change at all.”

That can be true, but so can this: A 13-year-old who finds instant celebrity — who has her athletic accomplishments hailed as groundbreaking and her status upgraded to role model — can be overwhelmed. At the end of the summer of 2014 when she returned to her South Philly home, her life had changed. She missed the first day of eighth grade not because she was sick, but because she had traveled to Los Angeles to appear on “The Queen Latifah Show,” throw out the first pitch at a Los Angeles Dodgers game, meet the team, then take the red-eye home. When she landed that morning of the second day of the school year, she pleaded with her mother to let her go to wed.

“I just wanted to see my friends, to go back to being normal,” she said. “I got worn out. I like to have my space, and I like to just walk around with my teammates, go to the store, whatever. When it first happened, my mom’s like, ‘No, you can’t do that.’ I did not like it at all because it’s not what I’m used to.”

Her 19-year-old self, though, isn’t her 13-year-old self. Then, it came at her fast. Now, she has perspective.

“I was so, so young; none of that hit me,” she said. “But as I got older, I started to really realize the impact that I’ve had. Growing up, being an athlete, that’s what you want: to make an impact on other people. So that was one of my goals. I just didn’t think it would happen at such a young age.”

Who could? Since then, Davis’s athletic journey has been more typical. An avid basketball player who was an outstanding point guard, she struggled to maintain her love for that sport in high school, and eventually she put it down. She played soccer, too, and in sixth grade had joined the middle school softball team. She had broken ground in baseball. Eventually, though, she broke away from it.

“Winning helps you enjoy the sport,” she said. “We were winning in softball, so I enjoyed it. I caught myself, like, watching softball a lot more.”

She is watching this week, too, the Women’s College World Series. She is living in a house in Northeast Washington with Grays players Scott Bandura, Jared Sprague-Lott, Joe Richardson and Brandon Gibbs, with Jahli Hendricks on his way in coming weeks. They are lifelong friends, teammates on that Little League team that went to Williamsport all those years ago. In the evenings since they arrived in Washington, they have flipped on those softball games.

“Mo was actually saying it the other day, that that whole environment brings back memories when we were in a situation like that,” Scott Bandura said.

Her situation is different now. She is listening to ESPN’s Jessica Mendoza call the Women’s College World Series and is aware that Mendoza broke through to be an analyst on the network’s Major League Baseball broadcasts. She has listened to ESPN’s Maria Taylor and LaChina Robinson talk about their rise in the business. She is a role model in need of role models, with a whole career ahead of her.

“She’s had all the experience in the world of being interviewed and speaking, so I definitely think she’ll be good,” Scott Bandura said. “Plus, I’m sure she’ll have plenty of stories about all of us.”

Remember her name, both for what she did seven summers ago and what she might do going forward.

“I think it’s pretty cool, too, to be such a young girl, African American being in a predominantly White, male sport — you don’t see that,” Davis said. “That’s something I wish we could see more, and as time goes on, I think that will change. That was just the start. I want to keep pushing women in sports, really.”