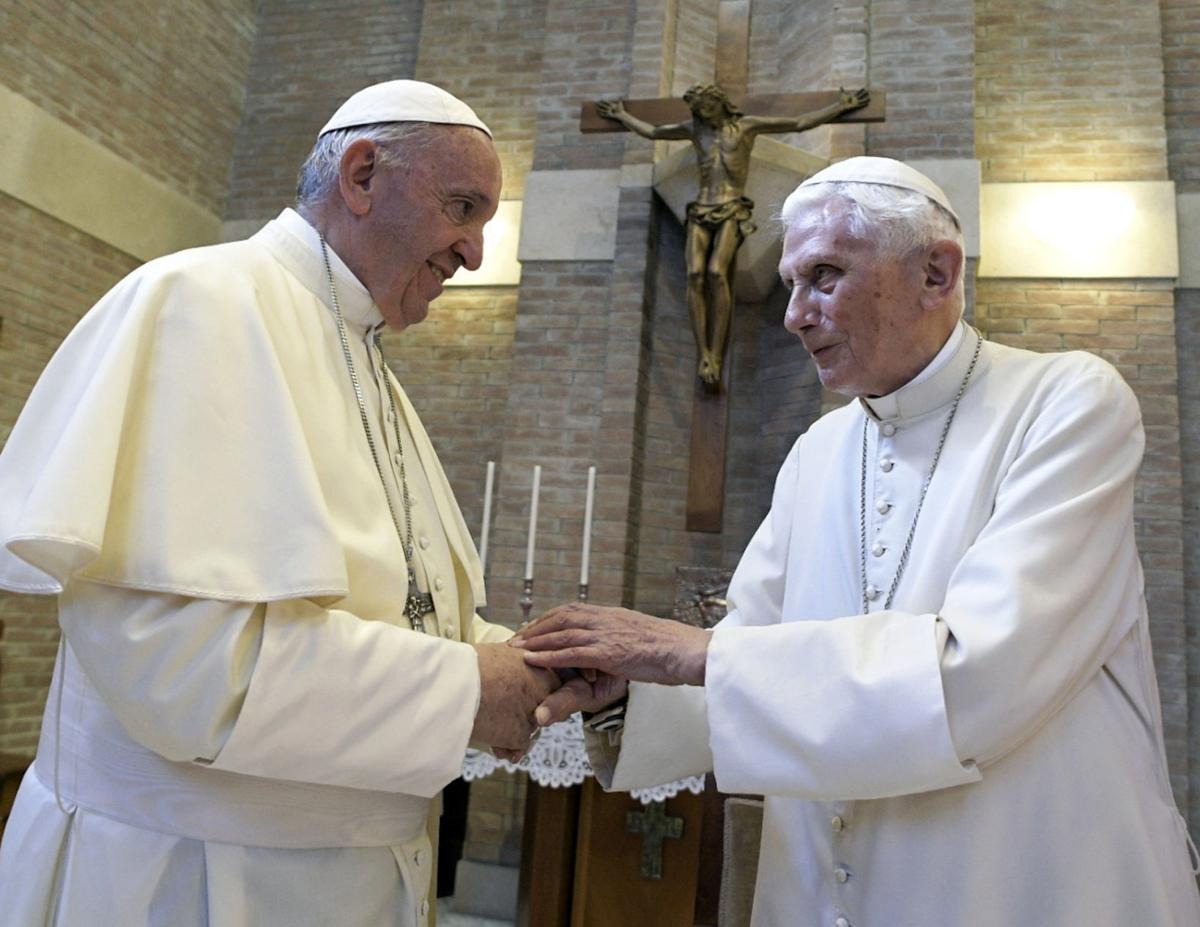 Pope Francis, left, and Pope Benedict XVI, meet in 2017 on the occasion of the elevation of five new cardinals at the Vatican. Benedict has broken his silence to reaffirm the value of priestly celibacy. — L’Osservatore Romano/Pool photo via AP, File 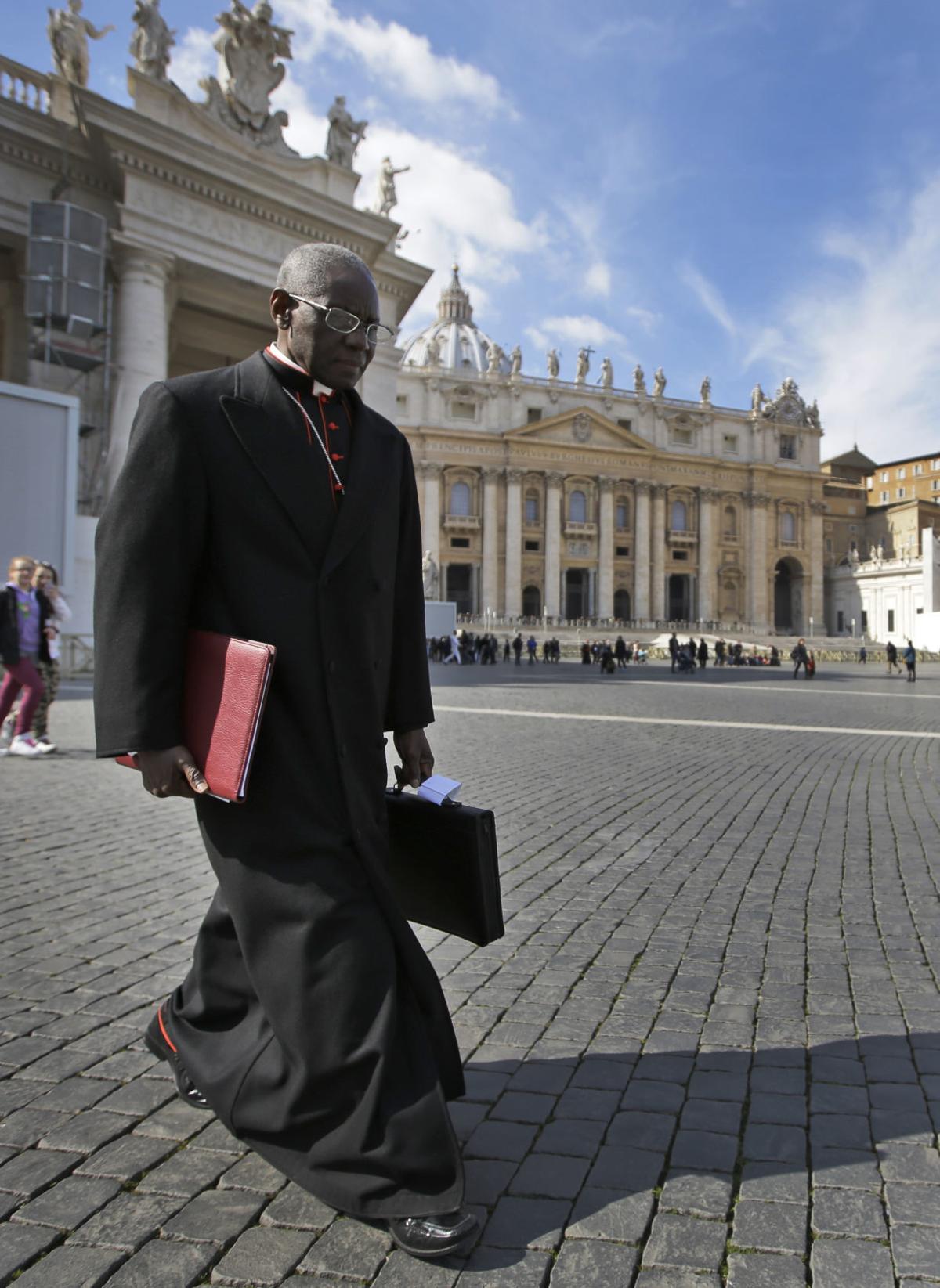 Cardinal Robert Sarah of Guinea walks in St. Peter’s Square in 2013. Sarah, who heads the Vatican’s liturgy office and has been a critic of Pope Francis, rejected allegations that he had duped retired Pope Benedict XVI. — AP Photo/Andrew Medichini, File 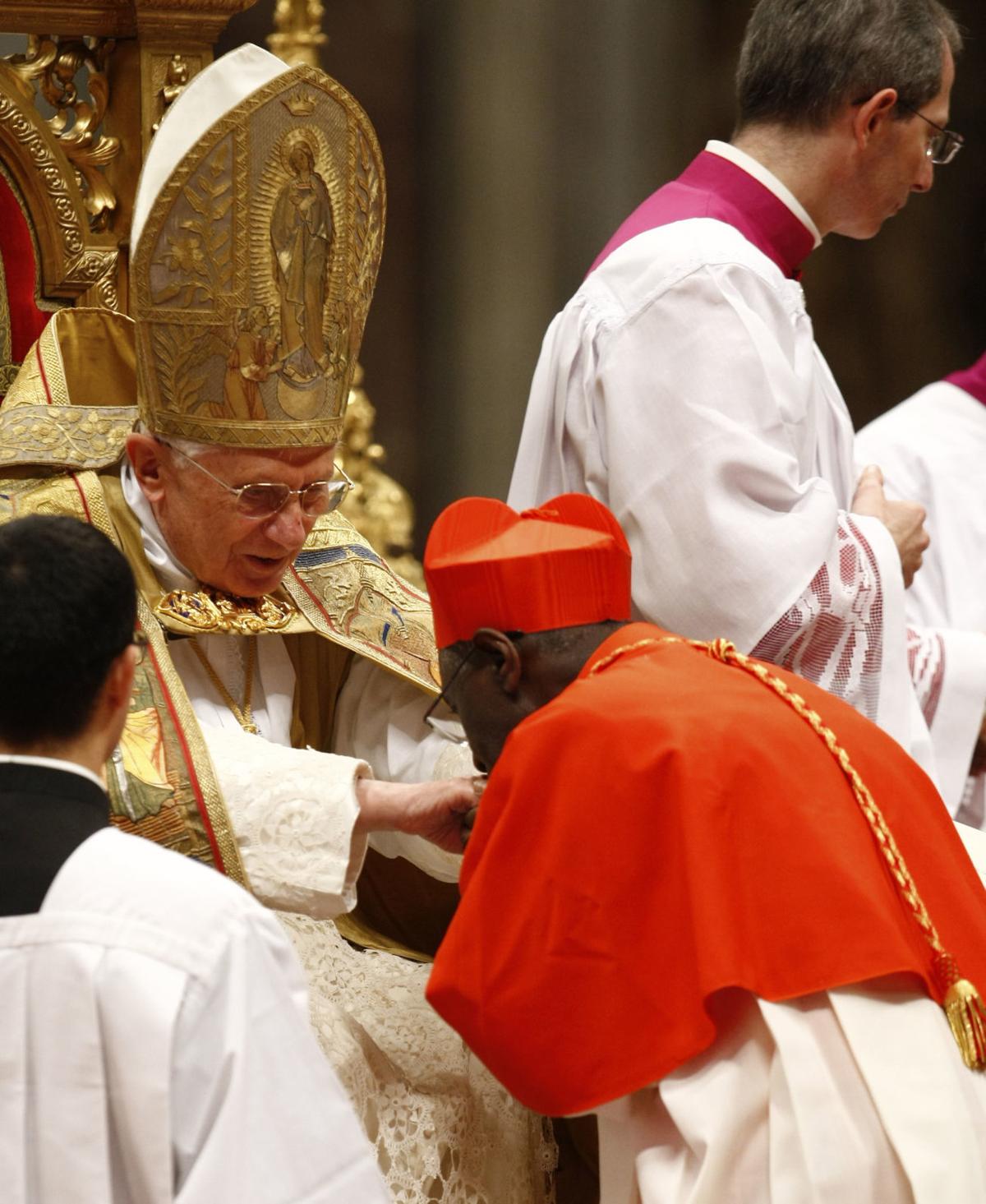 Pope Francis, left, and Pope Benedict XVI, meet in 2017 on the occasion of the elevation of five new cardinals at the Vatican. Benedict has broken his silence to reaffirm the value of priestly celibacy. — L’Osservatore Romano/Pool photo via AP, File

Cardinal Robert Sarah of Guinea walks in St. Peter’s Square in 2013. Sarah, who heads the Vatican’s liturgy office and has been a critic of Pope Francis, rejected allegations that he had duped retired Pope Benedict XVI. — AP Photo/Andrew Medichini, File

ROME — The theologically fraught relationship between two living popes — fictionalized in a current movie — is beginning to have very real consequences for the Roman Catholic Church.

It wasn’t supposed to be that way. Pope Benedict XVI, the first pope in the modern era to retire, promised when he stepped down in 2013 and took the title “Pope Emeritus” that he would remain “hidden to the world.”

But in a new book written in part by Benedict, published Wednesday in France, the former pope makes a firm defense of priestly celibacy at the same time that his successor, Pope Francis, faces a critical decision on whether to lift the restriction on married priests in remote areas. It is a move that Francis seems open to, but his critics consider a first step on slippery slope toward the end of the centuries-old tradition.

To be certain, Francis is the pope and is the one with the power to promulgate dogma. Benedict retired in 2013 and lost all such powers. But he has maintained, among a small but powerful coterie of conservatives, the power not just to influence, but to validate their views with a ex-papal seal.

The question now is whether he is a player or a pawn in the ideological battles.

Benedict “is being taken advantage of,” said Roberto Rusconi, a church historian, who considered the book an open and direct attack on Francis by “reactionaries” inside the church.

He said that Benedict had put himself in this awkward position by failing to renounce his title upon retirement and embracing the neologism of Pope emeritus.

“There’s only one pope,” Rusconi said.

An extraordinary Vatican conference in October had recommended that the pope lift the restriction on married priests in remote areas of the Amazon region, where a severe shortage of clerics means that the faithful often go months or longer without seeing a priest who can administer the sacraments.

Some bishops around the world have expressed interest in having married men of good standing be ordained as priests in their regions as well. Francis is currently working on a document with the potential of turning the recommendations from the Amazon bishops’ conference into church law.

It was in that context that, on Sunday, the French newspaper Le Figaro published an excerpt from a book, “From the Depths of our Hearts,” by Cardinal Robert Sarah of Guinea, a top conservative prelate and Vatican official, and Benedict.

In the book, the retired pope makes an impassioned case for priestly celibacy, writing about the “impossibility of a marital bond” for priests and that in the church’s tradition, renouncing marriage “became a criterion for priestly ministry.”

The excerpt became an opening salvo.

Whisper campaigns conducted by pro-pope and pro-pope-emeritus partisans are nourishing a dueling pope’s story line, with anonymous allegations from team Benedict in the Italian press suggesting that Sarah had inappropriately put Benedict’s name and face on the book cover. Talk grew over whether the time had come to enshrine restrictions on the conduct of papal retirees into canon law, and the Vatican scrambled to insist that there was nothing to see here.

But with each passing hour, there was more to see. Archbishop Georg Gänswein, Benedict’s closest collaborator, who happens also to be the prefect of the household of Francis’ household, found himself again caught in the middle of a different popes for different folks comedy of errors.

A conservative, Gänswein found himself publicly disagreeing with Sarah, who spent the early part of the week rejecting allegations that he had tricked the aging Benedict into joining his opposition to Francis’ agenda.

Benedict, at age 92, is now restricted to a wheelchair and has seemed frail in public appearances, appearing slumped and struggling to speak.

When Benedict became the first pontiff to resign since Gregory XII in 1415, his vow to remain hidden seemed a guarantee that he would keep to his refurbished Vatican convent and stay out of Francis’ way.

But Benedict turns out to be bad at hiding. He has repeatedly chimed in throughout Francis’ pontificate.

Their relationship — often depicted as a rivalry — has become an object of widespread fascination, most recently in the movie “The Two Popes,” where the two men are shown watching the 2014 World Cup final, rooting for competing teams. But the truth, as often is the case in the small Vatican City-state consumed with power politics and ideological rifts, shadowy maneuvering and gossip, is much stranger.

In April, only months after a groundbreaking Vatican conference called by Francis to address the Roman Catholic Church’s clerical sex abuse crisis, he released a 6,000-word letter holding forth on his views on the scandal’s origins. Benedict put the blame on the swinging ‘60s and sexual liberty, effectively undercutting Francis’ view that clericalism, or the abuse of power by priests, had allowed the scandal to fester.

That letter marked, for many critics, an egregious example of why having two popes — whose addresses are close but whose visions of the church are vastly apart — can be so confusing to the faithful.

But the book project appeared to mark an escalation.

“I believe that celibacy has great significance as an abandonment of an earthly realm,” Benedict wrote in the book, according to the excerpt in the French newspaper Le Figaro, adding that for priests staying on the path to God, “celibacy becomes really essential.”

On Tuesday, Gänswein told the Austrian Catholic news agency Kathpress that at the pope emeritus’ request, Sarah had called his publisher to ask that Benedict’s name and photograph be removed from the book cover.

Benedict had not co-authored the book, Gänswein explained, but had merely contributed sections with his thoughts on the priesthood. He added that the pope emeritus had not signed a contract with the French publisher, Fayard.

“It was a misunderstanding, without questioning Sarah’s good intentions,” Gänswein said.

The website of the French publisher, Fayard, proclaimed that Benedict had “exceptionally, with his great friend Cardinal Sarah” emerged from his silence “to write on one of the most difficult subjects for the church: the future of priests.”

“Finally I can send my thoughts on the priesthood,” read a letter dated Oct. 12 and apparently signed by Benedict, posted by Sarah.

Pointing to the letters, Sarah added, “I solemnly affirm that Benedict XVI knew that our project would take the form of a book.”

He also published on Tuesday a statement that called the allegations against him “deeply despicable,” and cuttingly added, “I sincerely forgive all those who have slandered me or who wish to set me against Pope Francis.”

He detailed his cooperation with Benedict on the book as dating back to Sept. 5, when he solicited Benedict’s reflection on priestly celibacy. “I can imagine that you are going to think that your thoughts on this could be inappropriate because of the debates that they would provoke,” Sarah said he wrote to Benedict, but he said that he told the former pope that “the whole church needs this gift.”

Benedict, he said, delivered a lengthy text to him in October, during the meeting of bishops from the Amazon region. Sarah said in his statement that he was bowled over by the “magnitude” of the work and asked the pope if he would be willing to combine it into a book with his own mediations on the issue. On Nov. 19, he said he sent the book’s manuscript to Benedict, who later that month signed off, writing, “I agree to publish the text.”