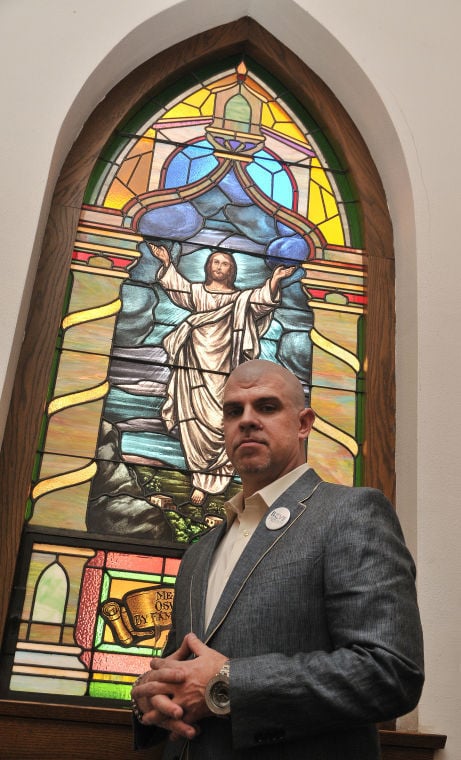 The Rev. Michael K. Heath is pastor of Church Of The Living Waters 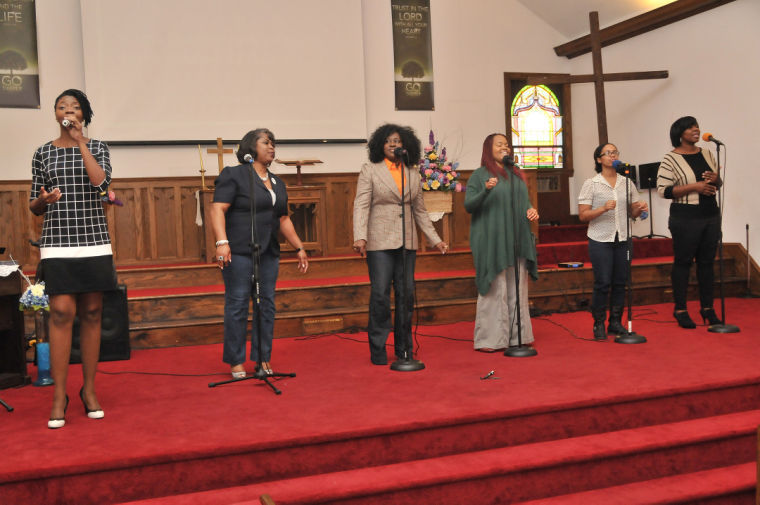 The Praise and Worship Team sing a selection. 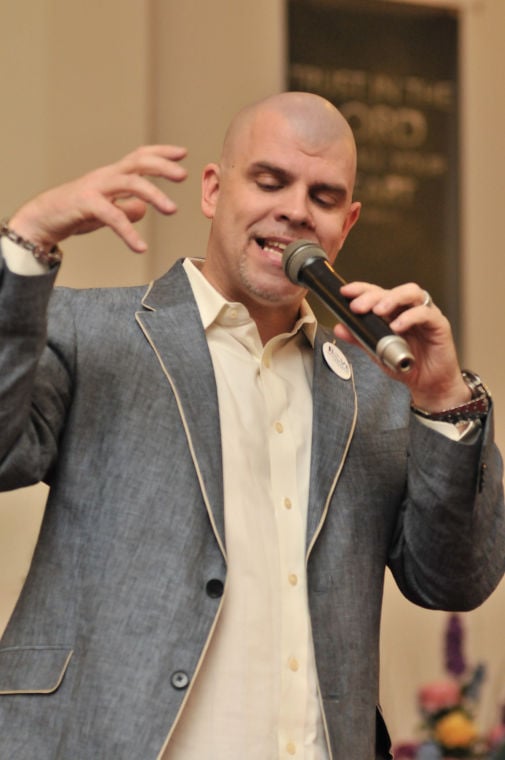 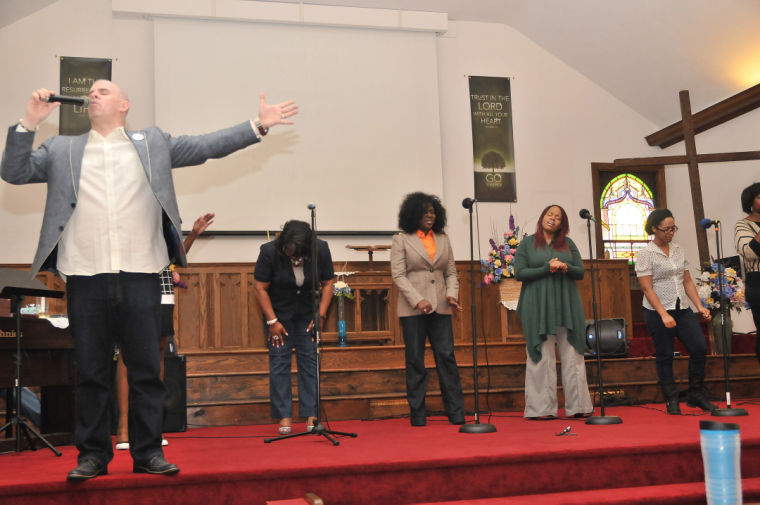 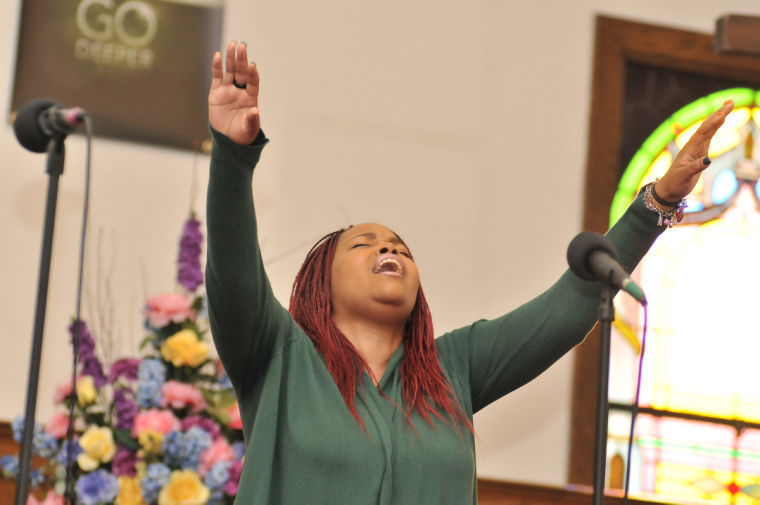 Victoria Johnson from Praise and Worship Team offers thanks.

The Rev. Michael K. Heath is pastor of Church Of The Living Waters

The Praise and Worship Team sing a selection.

Victoria Johnson from Praise and Worship Team offers thanks.

The Church of the Living Waters in Collingdale is growing by reaching out to the unsaved younger generation. The Rev. Michael Heath and his wife, Crystal, have been leading many in the Delaware County and Southwest Philadelphia area to the Lord by what they call “loving on purpose” in a nontraditional style. So, for the more than two years that the congregation has been meeting at the Church of the Nazarene, 202 MacDade Blvd. at 3 p.m. on Sunday, they have more than doubled their membership to about 100 and they are still growing.

Tracey McDaniel and his wife, Alicia, joined the church when it opened the doors in February 2012. For this couple, who are expecting twin sons in January, Living Waters is home. Tracey McDaniel is an armor-bearer, leads the media ministry, is among those who coordinate security, and is active with the eight-member leadership team. “We are just a small church, but we are doing many great things,” McDaniels said.

“We are really the church of the future,” McDaniels said. “We utilize technology so that it is easier for those who cannot physically come to church to get the Word. If you don’t bring your Bible to church we have it up so you can follow along. We also have some older ones who are not tech savvy, so we kind of make it easy to worship with easy to follow sermons and active ministries.”

McDaniels is quick to point to this year’s “Back to School” drive, in which the church gave away some 500 book bags to neighborhood youngsters. They offered haircuts for the male students returning to the classroom. Earlier in the year they gave away handwarmers to those standing at transit stops, obviously cold with uncovered hands.

So, the Living Waters ministries are proactive, according to McDaniels. “We try to bring Jesus to the ordinary people by loving on purpose. We give SEPTA tokens to those waiting for the bus. We go in the laundromats and give extra quarters to families doing their wash. We’ve even given bottled waters to those working outside or waiting for the bus on hot days. We always tell them that this is what Christians do,” he said.

Church member Loida Hopkins agreed. She too joined the church when it opened its doors two years ago. When she worships at Living Waters she is joined by her husband, Xavier, and their one-year-old son, Daniel.

“This is a church where you can come as you are, even in jeans,” Hopkins said. “The pastor and first lady are very transparent. The way they are in the pulpit is just the way they are all the time. This makes everyone else free to be who they are.

The informal atmosphere of Living Waters is what the pastor hoped one would find. Heath grew up in a nominal Christian household that basically lived what he called “the secular life.” Growing up he occasionally attended Catholic Mass until he became “saved” while attending an evangelical church in Delaware. After receiving his calling in his teens, he began preaching when he was 19 years old. He utilized his “street smarts” from his upbringing to break down theological concepts so his peers could embrace the Word. He later attended the Philadelphia College of the Bible and earned his master’s of divinity from the Biblical Theological Seminary, where he is currently employed in the urban program ministries. He is currently working on his doctoral degree in theology.

As the church’s first lady, Crystal Heath brings her musical prowess as both a singer and songwriter. She has been the featured vocalist at the “Clean Comedy Show” held on the campus of the New Covenant Church of Philadelphia in Mount Airy earlier this year. She was also the featured vocalist at events like “It’s OK 2 Laugh” comedy show last spring and she’s been on stage singing selections like Lawrence Flowers’ “More” at Warmdaddy’s, She insisted that she is not the “pedestal-perched preacher’s wife,” but is active in various forms of ministry including her music ministry.

“I grew up in the church from birth,” Crystal Heath said. “My family started at the Faith Fellowship Church on Stenton Avenue. When I was around 12 we transitioned to the Christian Baptist Church on Church Lane. At every church I was in I sang on the choirs, because that brings me joy, and that is just part of my ministry.”

The couple has been married for 12 years. They insisted that the church family is really an extension of their own loving family unit. Together they share four children — Crystal’s 28-year-old daughter Sharia and the pastor’s three children, 23-year-old Michael, 21-year-old Ciara, and 19-year-old Joshua. They have five grandchildren who occasionally accompany their grandparents to Living Waters services.

“We really wanted to create an environment where there were no engineered cliques,” Pastor Heath said. “When it comes to loving on purpose , we just want all to feel that welcoming love. We hug a lot in this church when we greet people. I’ve been to churches where there are clubs where you almost need to know the secret password or handshake to get admitted. We don’t do any of that.

“When I preach I don’t have the trappings of some traditional churches. I never use jargon or vernacular that someone who doesn’t go to church would not understand. Sometimes in church it’s like they are talking in code, and if you are not a member you really don’t know what they are saying. That’s not the case here,” the pastor said.

One of the sermons that the congregation has really responded to is the “Jesus and his Thugs”, in which Heath shows that those Jesus chose to be his disciples would have been members of today’s underclass. “These were the guys that many probably wouldn’t want in their church cliques, the crooks, the tax collectors,” Heath said.

“The ‘Jesus and his Thugs’ sermon series is one of the best the pastor has given,” said McDaniels. “He shows that the 12 apostles in the Bible were like the thugs in our time. Then you can really get the message of how we ought to look at each other. You get a true understanding of what Jesus and his 12 apostles would look like if they were living today.”

The pastor also tries to emulate Jesus when he insisted that the children not be excluded. To this end, the church has many programs geared around the interests and activity levels of youngsters. There are a children’s choir, a praise dance group, a drama ministry that does skits in church, and there’s even a gospel rap ministry.

Furthermore, there is a Children’s Church so the young ones can get the Word in a way that captures their attention. This also frees the parents to be able to hear the sermon and enjoy the service without the distraction children can sometimes cause, according to the Heaths.

“This is important, because 90 percent of our parish are under the age of 40,” Heath said. “On a given Sunday we can have as many as 20 to 30 children in church. So we have to have an environment that caters to families with young children. We are fortunate that we rent a facility where we can have a Children’s Church, and there is a nursery here.”

To this end the Church of the Living Waters also offers a conference call midweek Bible study to accommodate families with a large number of preschool and school-age children. Rather than families having to commute late at night, they can call in to midweek services. There’s also an early-morning prayer service by phone. “We believe that no one ministry can reach everyone, but together we can change the world,” Heath said.