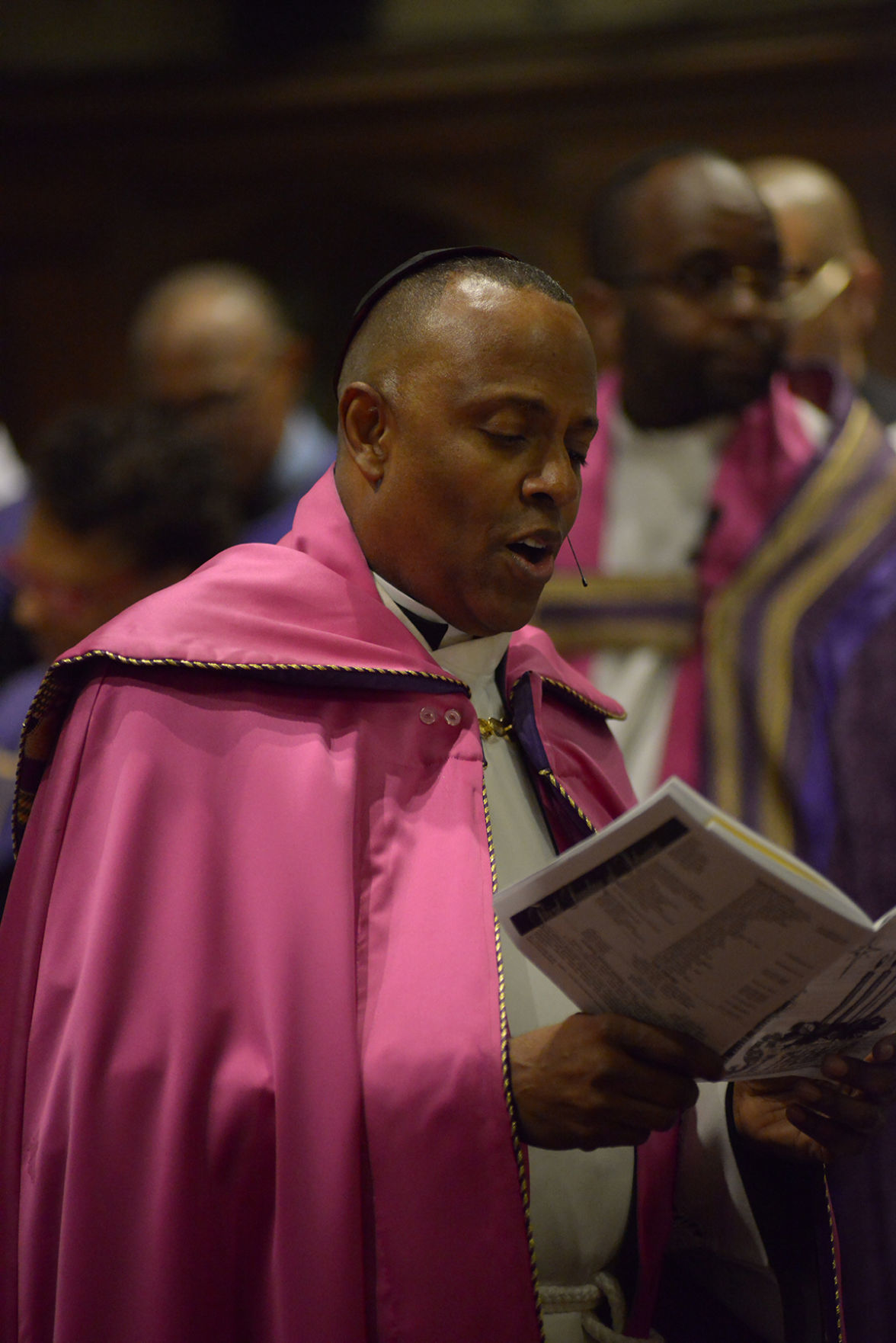 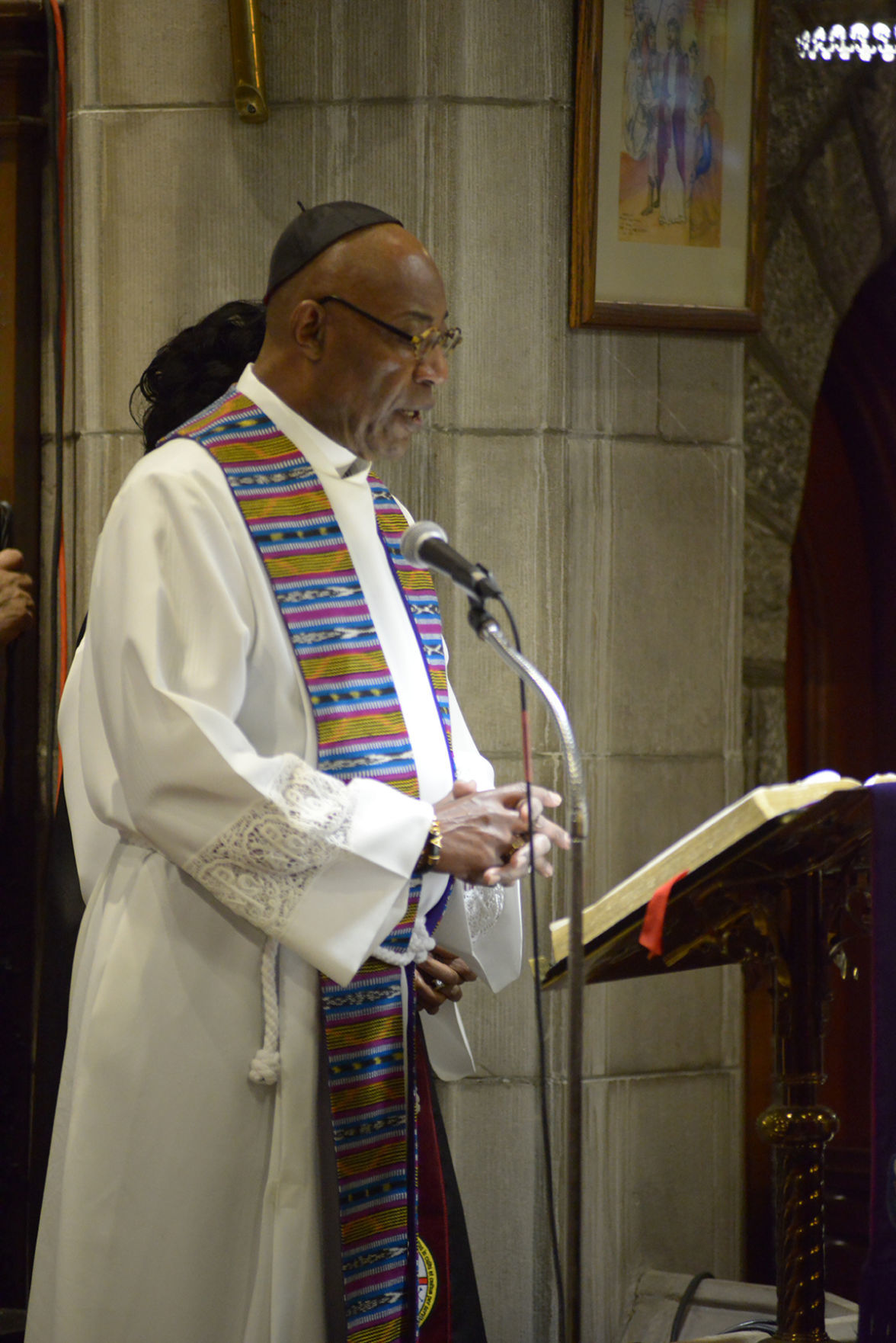 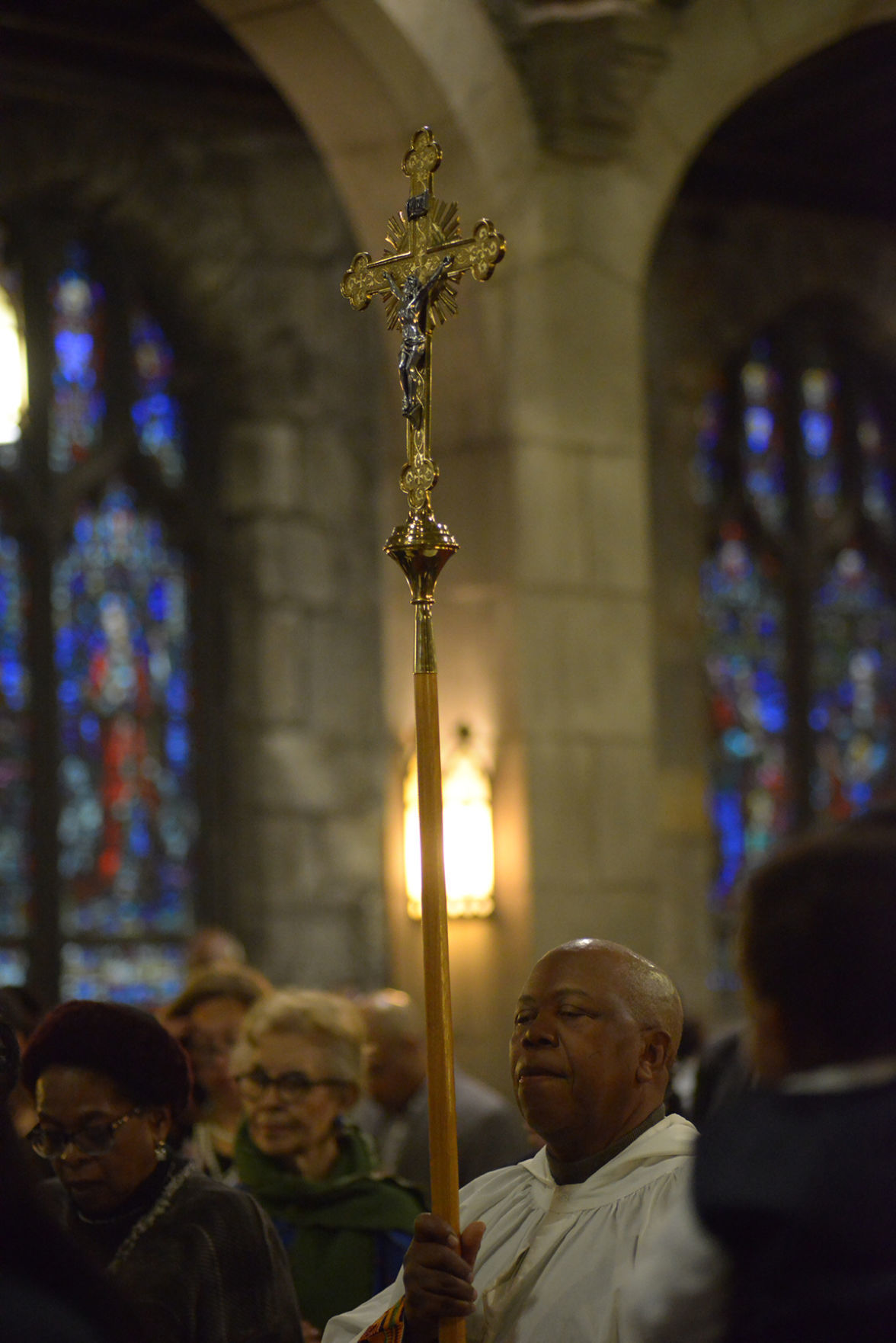 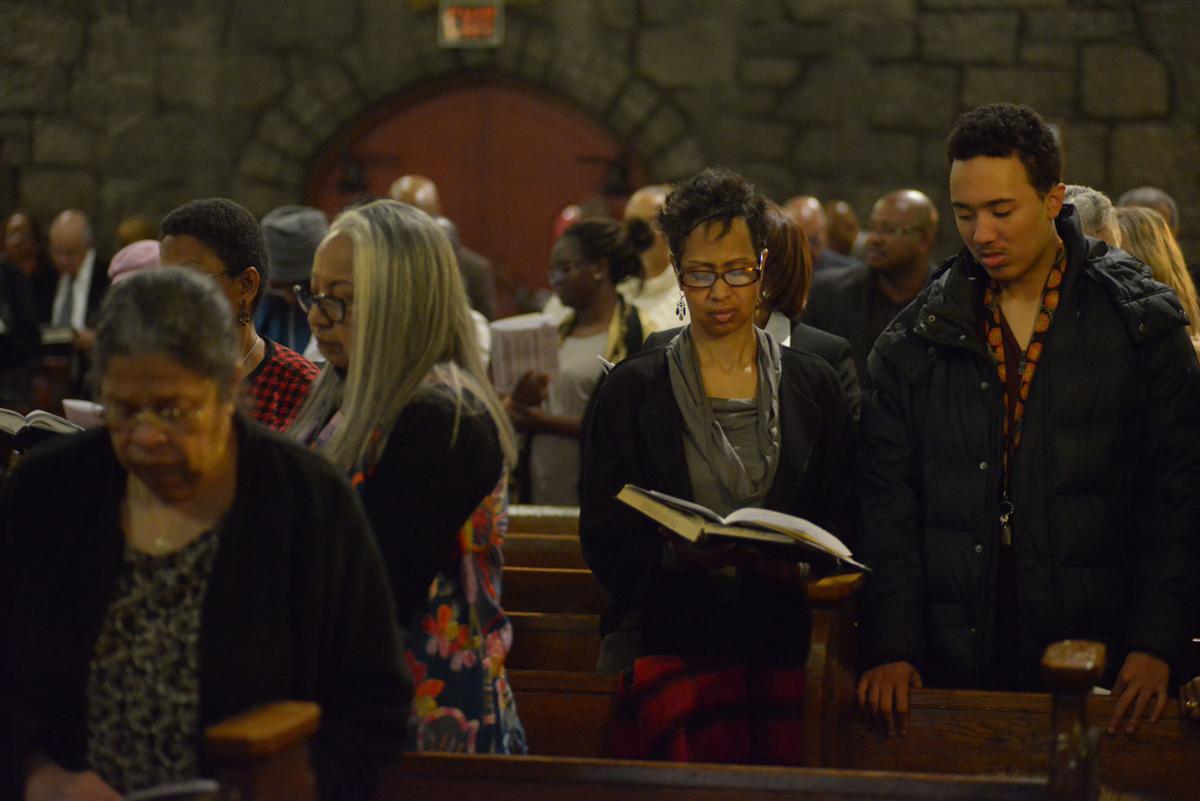 The congregation participates in service. 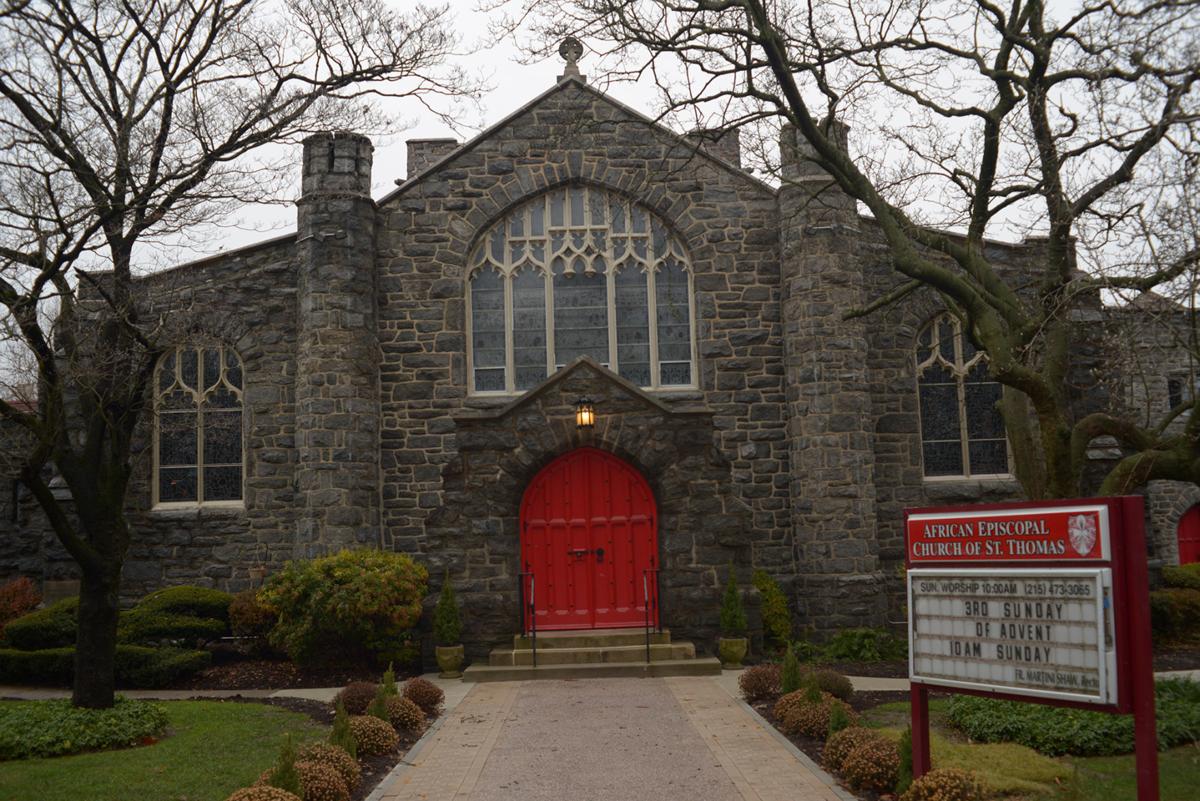 The congregation participates in service.

With deep roots planted in the 1700s, the African Episcopal Church has a long history of ministering to African people in the U.S., and the seeds from which those roots have sprouted germinated in Philadelphia.

The church was originally located at Fifth and Adelphi streets in Philadelphia, now St. James Place, and moved several times before finding its current home at 63rd Street and Lancaster Avenue in West Philadelphia.

The rector, the Anglican equivalent of pastor, for St. Thomas is official called “the Very Reverend Canon Martini Shaw,” but he is affectionately known to his congregation as “Father Shaw.”

“Those visiting St. Thomas can expect to find an open, loving church, and we emphasize ‘open.’ That is very important to us,” he said.

The church opens its arms to all who seek to worship, and this may be what has kept it thriving for over two centuries.

“St. Thomas in 2018 is still alive and is still vibrant and still actively involved in the Jesus movement,” Shaw said.

“One of the things that St. Thomas has done and continues to do since the ‘80s is ensuring that the church remains current and relevant to what’s happening today.”

Part of that relevance is the church’s noticeable Afro-centrism. From the stained-glass window with images of a Black Jesus with African features in dialogue with Black disciples, to a crucifix upon which a very Black Jesus is hung, St. Thomas takes no efforts to hide its African identity.

“We are more Afro-centric than many of our other Episcopal parishes. We embrace the fact that we are Anglo-Catholic, but at the same time we are African American, so we try to merge those cultures together.”

Being Afro-centric does not mean that other ethnicities or racial groups need feel estranged at St. Thomas. In fact, diversity and inclusion are essential to the church’s identity.

“St. Thomas is an open, Christ-like community of faith where we welcome all persons of all walks of life, gender, ages and sexual orientation,” said Shaw.

Not only does St. Thomas welcome and embrace them, said Shaw, but they are incorporated in the life of the church, including people with different sexual orientations.

“During the year when it became legal for same-sex marriages to occur in Pennsylvania, and shortly after that the Supreme Court of our nation made the same ruling, the Episcopal Church was one of the first denominations in this country to begin the process of welcoming same-gender marriages,” said Shaw.

“St. Thomas is a part of the Episcopal Church and we certainly share in that practice, as does our entire church. We do welcome all persons of all nationalities, gender and sexual orientations and we do now, as an Episcopal hurch, condone same-sex marriage as well.”

While Shaw agreed that the laity is important to keep a church energetic and thriving, he said it was essential that the heads of the church infuse that energy into the ministry.

“If the leadership are dull and unenthused about the ministry, then that lack of energy will seep down to the ministry. So, yes, the laity are important but its also important that ministry leaders have the necessary enthusiasm and energy to give life to the body,” Shaw said.

“I have been to some churches in decline where the rectors saw their role as supervising the death of the church. They were kind of overseeing a hospice instead of finding ways to bring life to the church,” said Shaw.

Founded by freed slave and abolitionist Absalom Jones, the first African Episcopal Church of St. Thomas was dedicated on July 17, 1794. Jones’ remains are on the church’s property to this day.

“We had a custom for all of the Black churches to put African in their names, one, because they were very proud of their heritage and they also wanted to signify that African people had the ability and wherewithal to establish congregations,” said Arthur Sudler, director of the Historical Society of St. Thomas.

“I think St. Thomas continues to thrive today because of the vibrant leadership that we have been able to attract and continue to empower us,” he said.

Sudler also credits the “vibrant and innovative liturgy” of the church.

“Episcopal liturgy goes all the way back to the third or fourth century and it has been modified over time. Father Shaw has a special gift in terms of liturgy and so, while we maintain what is basic and intrinsic about Anglican Episcopal liturgy, we have also augmented it and continue to renew it and refresh it and I believe that attracts people.”

“Then there is always the critical element of music,” said Sudler. “The Anglican church, I think, has always been blessed to have variety, high church, low church, folk, Caribbean, African. Wherever you find an Anglican community, more than likely you are going to find music that reflects the dominant people in that congregation.”

Another thing that continues to attract people to the church, including a significant number of youths, is the diverse programs and ministries in which they can participate.

J.R. Brockman has attended St. Thomas since the age of 6 and now serves as Scout program coordinator for the church.

“The Episcopal faith felt like it was the type of worship that allowed me to meet my spiritual needs and so I became a lifelong Episcopalian.”

Brockman said the congregation has changed over the years but consists of a variety of people from all backgrounds.

“We’ve been a community that covers blue-collar postal workers to school principals, lawyers, doctors and politicians, so it has been a church that has been open and welcoming to all kinds of individuals, and once people have become a member of St. Thomas, they stay members for quite a long time.”

Those members, said Brockman, are also invited to participate in a variety of ministries that feel comfortable to them.

Ricardo Bostic, who co-chairs the Tree of Life Prison Ministry at St. Thomas, hosting its annual holiday party for children of incarcerated parents.

The children received gifts donated by sponsors and church members and enjoyed activities such as face painting, games, story-telling and lots of refreshments.

It’s a lot of work, but Bostic said the participants enjoy every minute.

“We are a church that open the doors to all people. We are just a church-going people centered around Jesus Christ and we believe in helping others and trying to spread that love around,” he said.

“There are a lot of different ministries and we just all come together to try to help the neighborhood, the children. There’s a whole lot of things we try to do.”

Well Their Are Certain Things GOD, Jesus And Natural Order To Things Just Do Not Sustain Life = Same Sex Marriages Can Not Reproduce Without Committing Adultery = As Jesus Demonstrated And Said "My Father House is called the house of prayer" = There Are Certain Things GOD House Can Never Be "A Den Of theives and/or Small Cities of Sodom And Gorrmorahites' = But Then Again You All Claim Too Know GOD Better Than HE Has Described HIMSELF Too Be = HE Made Deed Of Choices HE Do Not Condone All Of Them = But Then Again We Know That And/Or This = Love Of Membership More Than HIM HE Said Is Not Worthy Of HIM