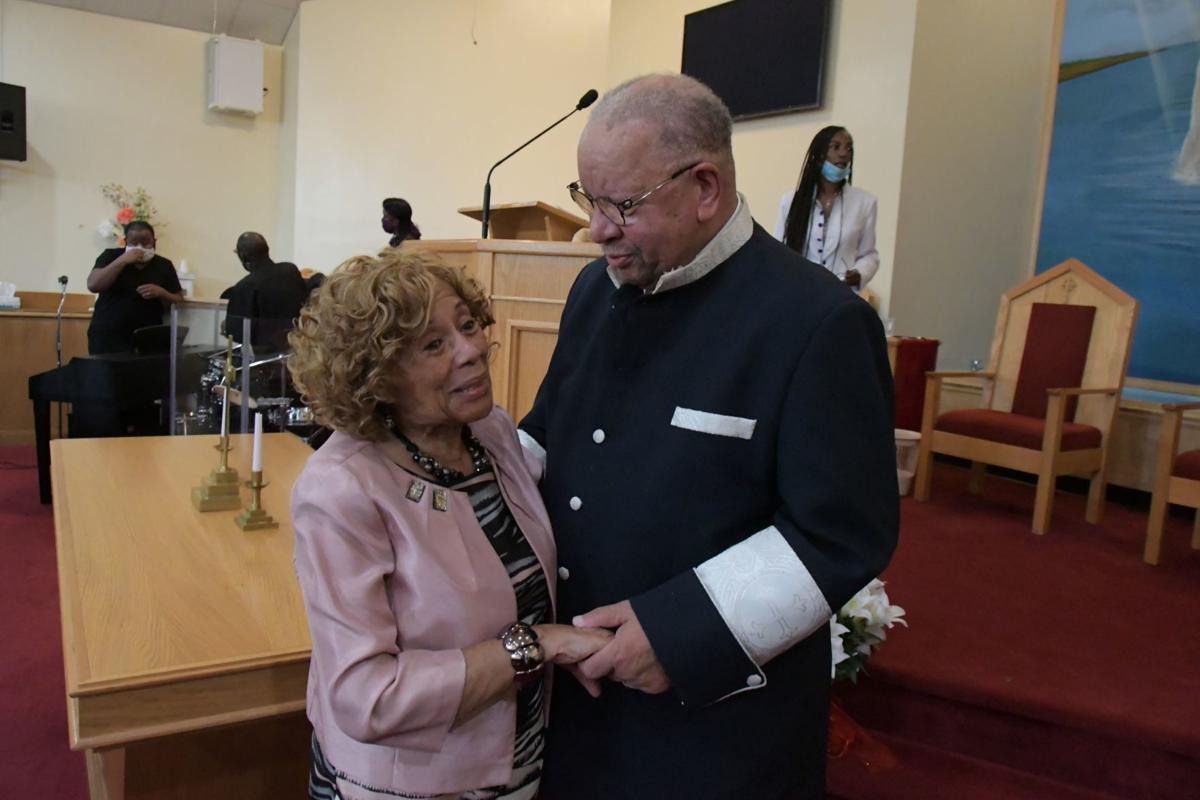 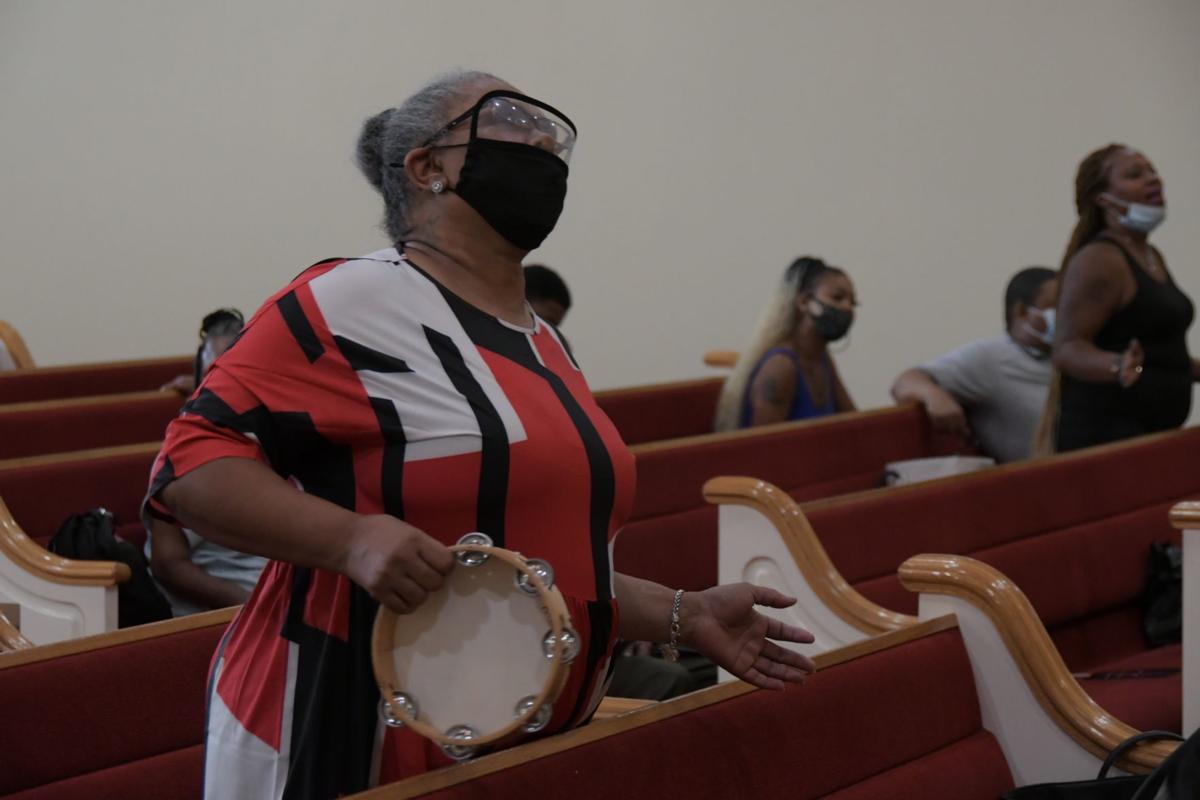 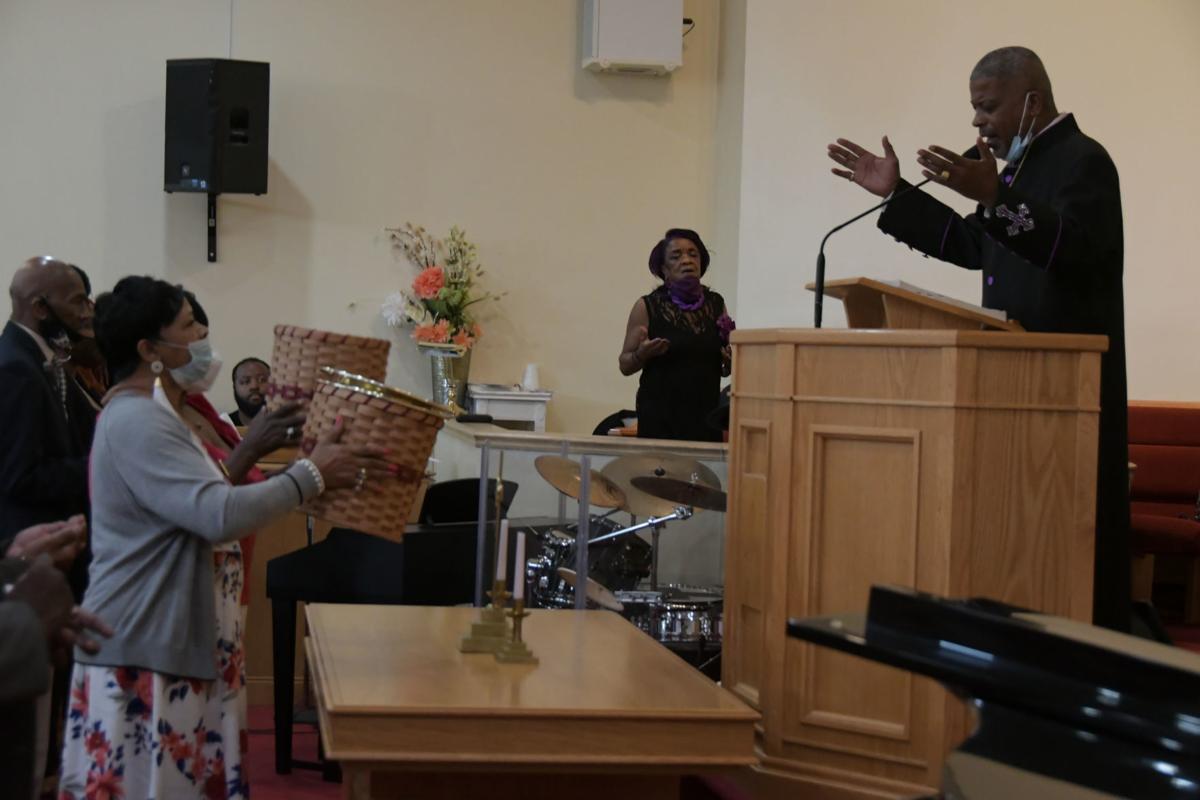 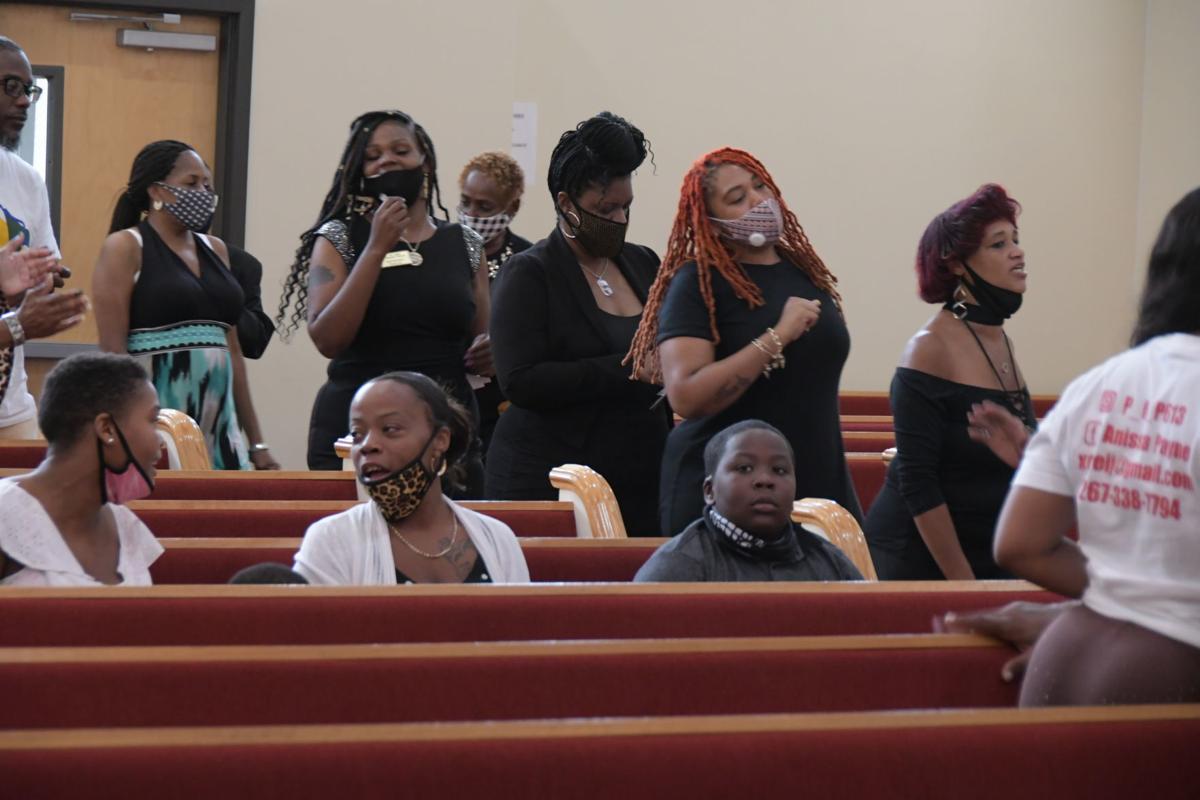 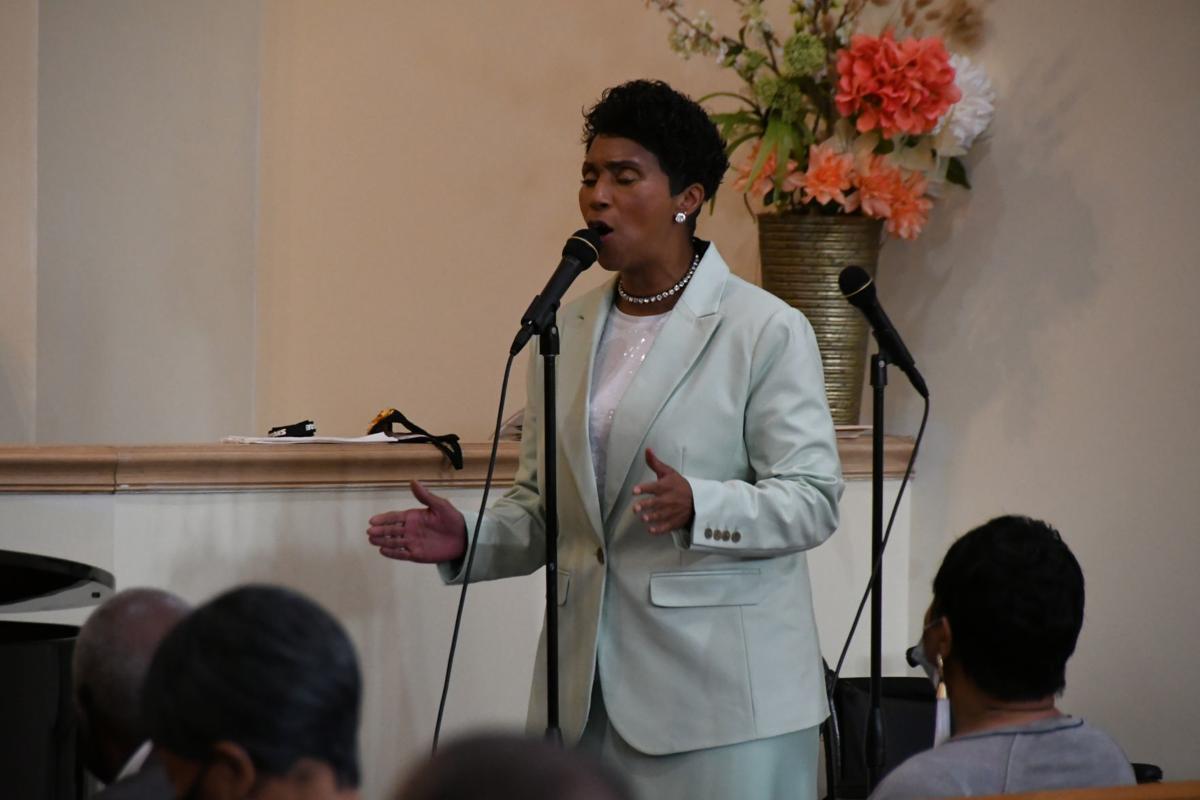 Deaconess Renee Mitchell Bunion sings “I Want To Be Worthy” and offers prayers. 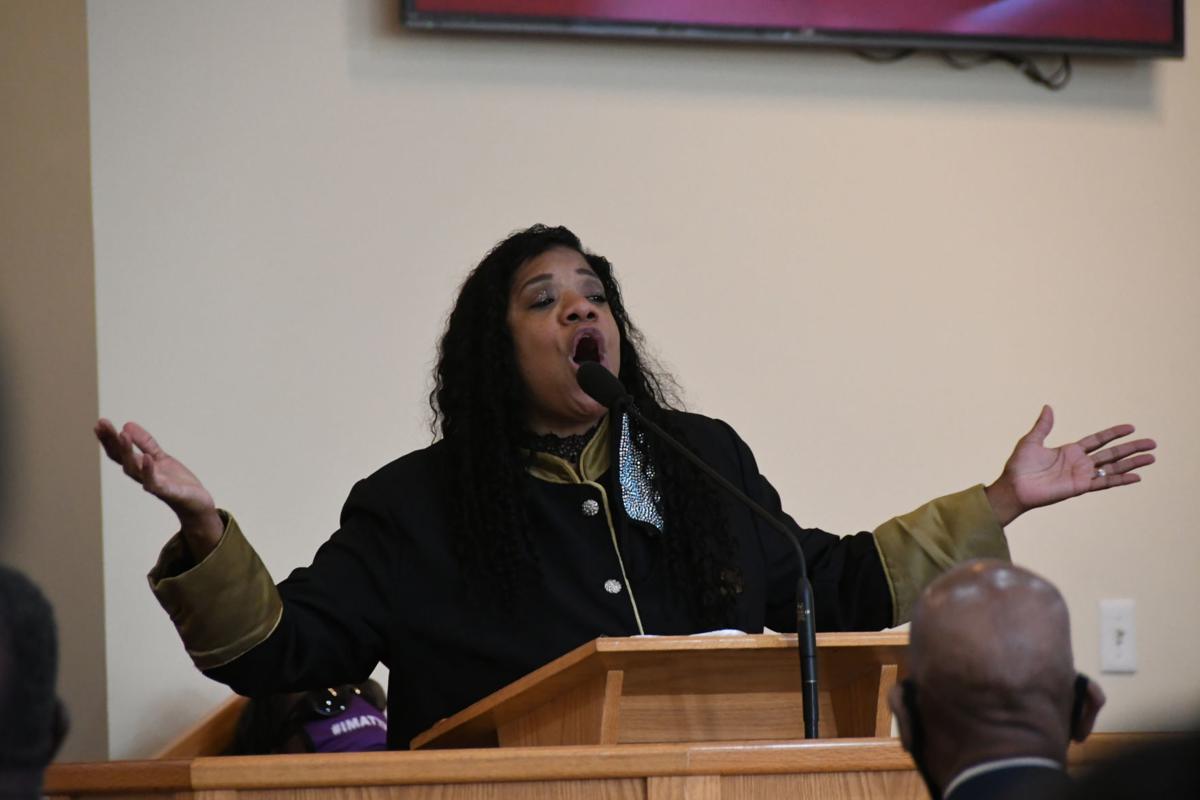 Associate Minister Devon Boatwright leads the choir in singing “On the Battlefield for My Lord.” 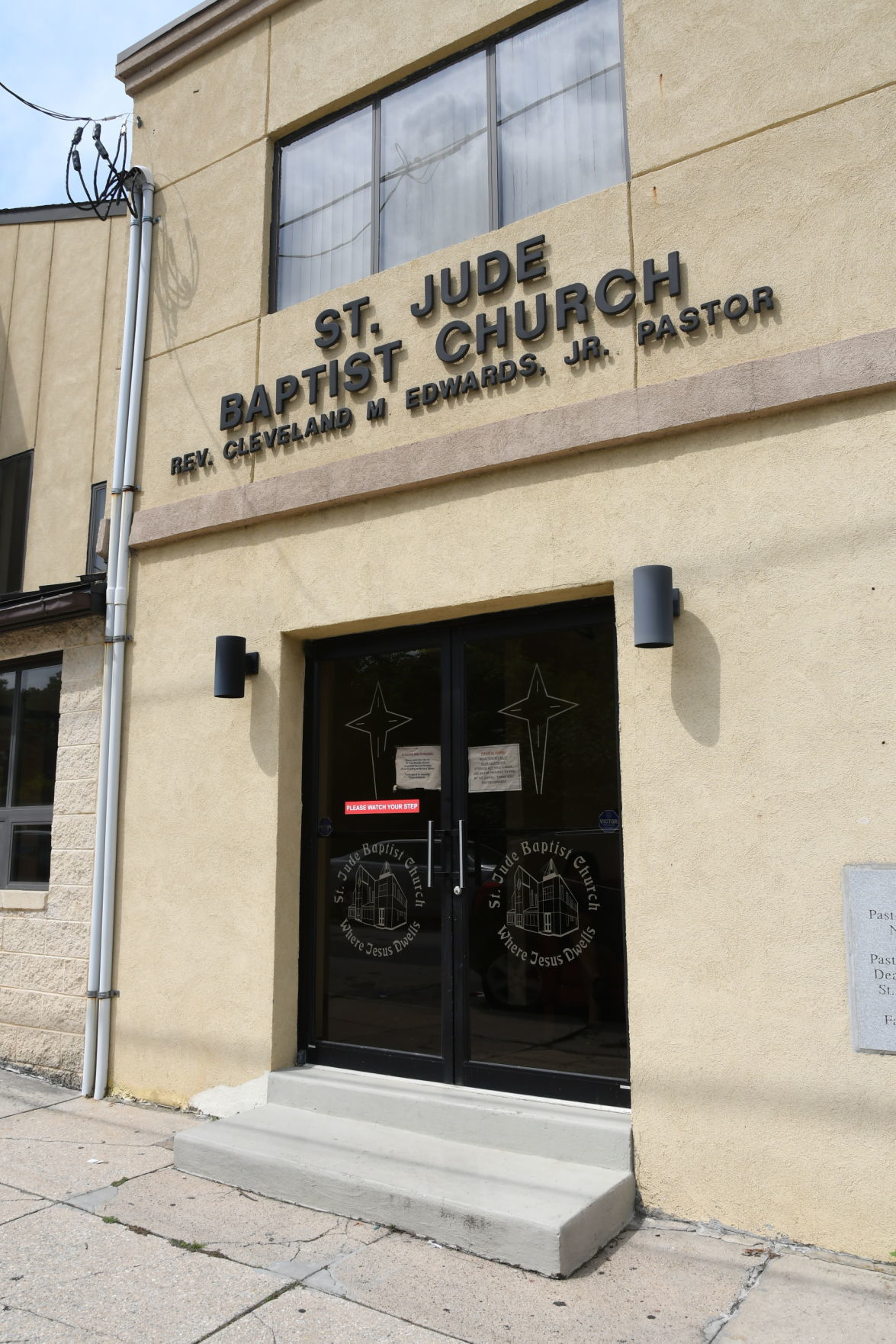 Deaconess Renee Mitchell Bunion sings “I Want To Be Worthy” and offers prayers.

Associate Minister Devon Boatwright leads the choir in singing “On the Battlefield for My Lord.”

St. Jude Baptist Church is a beacon in the Mantua section of West Philadelphia. Rich history and pride run deep in Mantua, but so do blight and trauma.

“We had hard times growing up in this neighborhood, but what the people had was faith,” said the Rev. Cleveland Edwards Jr., the church’s pastor.

Under his leadership, St. Jude is more than a place of worship to its members and neighbors; it is a place of hope, encouragement and love.

“My father, Cleveland Edwards Sr., organized the church in 1948. And my mother, Mattie Henry Edwards, named the church St. Jude,” Edwards said. “Those that are lost and left out was what [St. Jude] ministers to.”

Saint Jude, the apostle, is a symbol of choosing faith when all seems lost, standing firm in religious truth in the face of an ever uncertain and challenging world.

Edwards grew up in Mantua, also known as The Bottom. In reference to walking in his father’s shoes, he joked, “As a preacher’s kid, that is not something you necessarily look forward to doing.”

But God had other plans. “I didn’t want to [become a pastor], but that was the Lord’s doing,” Edwards said.

The family-oriented church at 626-632 N. 38th St. has a long history of embracing those who have been shut out and uplifting those who’ve been counted out.

During the 1990s, the city of Philadelphia was dealing with many issues that arose from the crack epidemic.

“When l got there in 1991, we were a storefront church with about 18 people,” Edwards said. “Other people used to call us the crack church.”

As the church grew and expanded on the foundation laid by his father, who died in 1963, Edwards sought out and served those who needed help and hope the most, including recovering addicts and those who still faced the challenges of substance abuse.

“What God can do is move people from the crack to Christ,” Edwards said.

“A lot of times we went out on a mission, we had services on the street,” he said. “We used to go to the homeless shelters on 12th and Vine Street. We also had food programs.”

In 2005 the church built a new sanctuary, a million-dollar project funded by the United Bank of Philadelphia. With only $250,000 left to repay on the loan, Edwards said he will “pay off the rest and be debt-free.”

“My wife and I renovated the whole building. Our old storefront is right next to the new sanctuary,” he said.

“We hope to get the message out that God’s delay is not God’s denial, he comes when we need him,” Edwards said. “We were in the storefront for 15 years before he allowed me to build this building. God has to be able to prepare your heart before he gives,” he said.

“The Lord allowed us to build in 2005 and in that we crowded it out. We went from 18 people in our congregation to 100,” Edwards said.

The church’s membership now is 400, and about 200 people attended on Sundays before the coronavirus outbreak, Edwards said. “The ministry is growing. We have six ministers, one who is ordained and the rest licensed,” he said.

Sunday service was streamed online during the mandatory shutdown and state shelter-in-place orders.

“People were complaining and saying that they need to be in the body of Christ,” Edwards said.

Now the church doors are back open and in-person services have resumed. The church has been fully sanitized and signs were put in place to remind folks of new safety procedures.

“We are just opening up and I don’t want to take a chance on anybody. No one can enter without a mask and we are following all government mandates and guidelines,” Edwards said.

“We opened with the restrictions and everyone was separated. Bible study took place before praise and worship and our service is shorter than usual,” he said. “We try not to have no more than 50 people in the church.”

Before making the re-opening preparations Edwards said he called the governor.

“I tell my seniors, most who have health issues like high blood pressure or diabetes, to stay home,” Edwards said. “They stream and I tell them don’t come.”

“We are a loving and kind church. I want people to know what God has done for us,” Edwards said. “We are also trying to encourage people. There is so much going on, people need to be encouraged and reminded about Christ.”

Edwards suggested turning to Proverbs 3, 5, and 6 when in doubt.

“Trust the Lord in all of our hearts,” he said. “What we have to do in this virus storm is trust God.”

On Sunday, he encouraged those in attendance to pay attention to the current climate but not to lose faith or hope. He also stressed the importance of voting.

“Delight your heart in Christ,” Edwards preached. Reflecting on Song 37, he said, “fret not thyself of the evildoers because they will soon be cut down like leaves.”

Edwards’ overall theme is maintaining unwavering trust in God and holding on to faith.

“At the end, God always comes through and we have to trust and hold on to patience. We cannot out-think God. We just have to trust him,” he said.

“The love of Christ and the love of family and having love for our neighbors is why our church grew. I always preach love.”