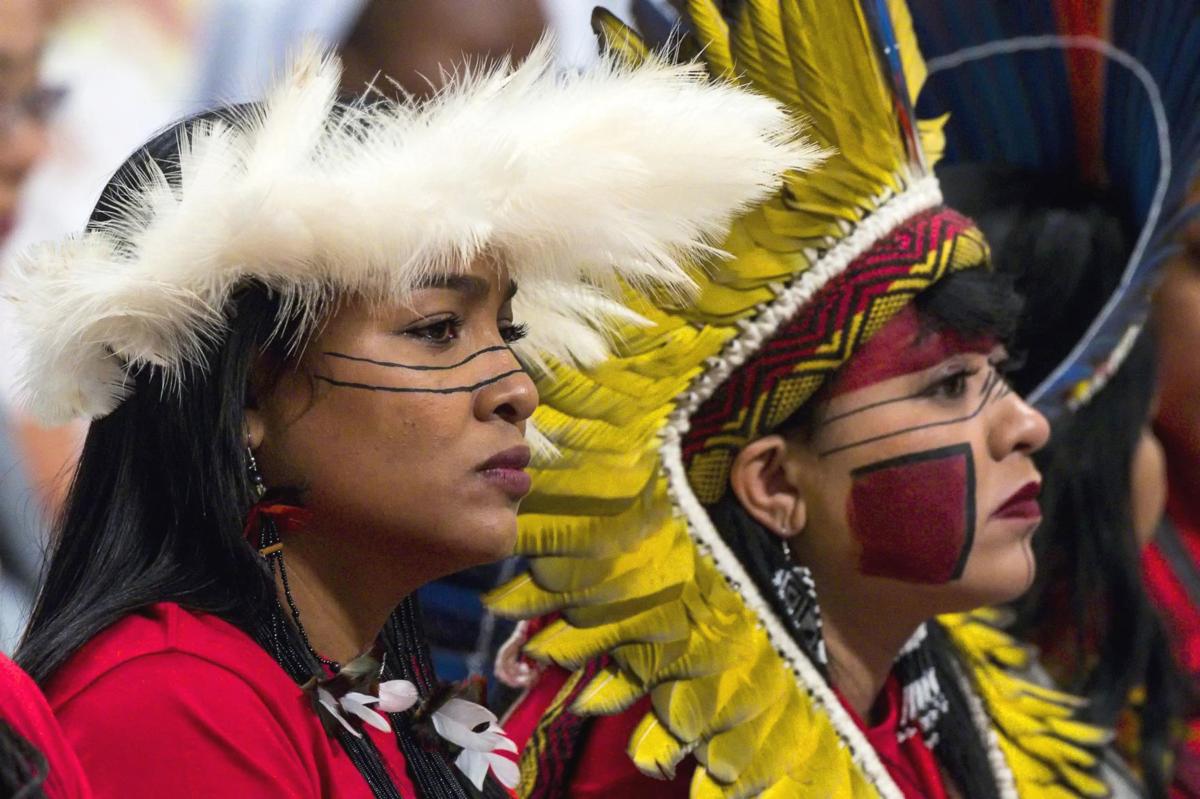 Participants in the Amazon synod attend a Mass celebrated by Pope Francis on the occasion of the World Missionary Day, at St. Peter's Basilica at the  , on Oct. 20. —Angelo Carconi/ANSA via AP 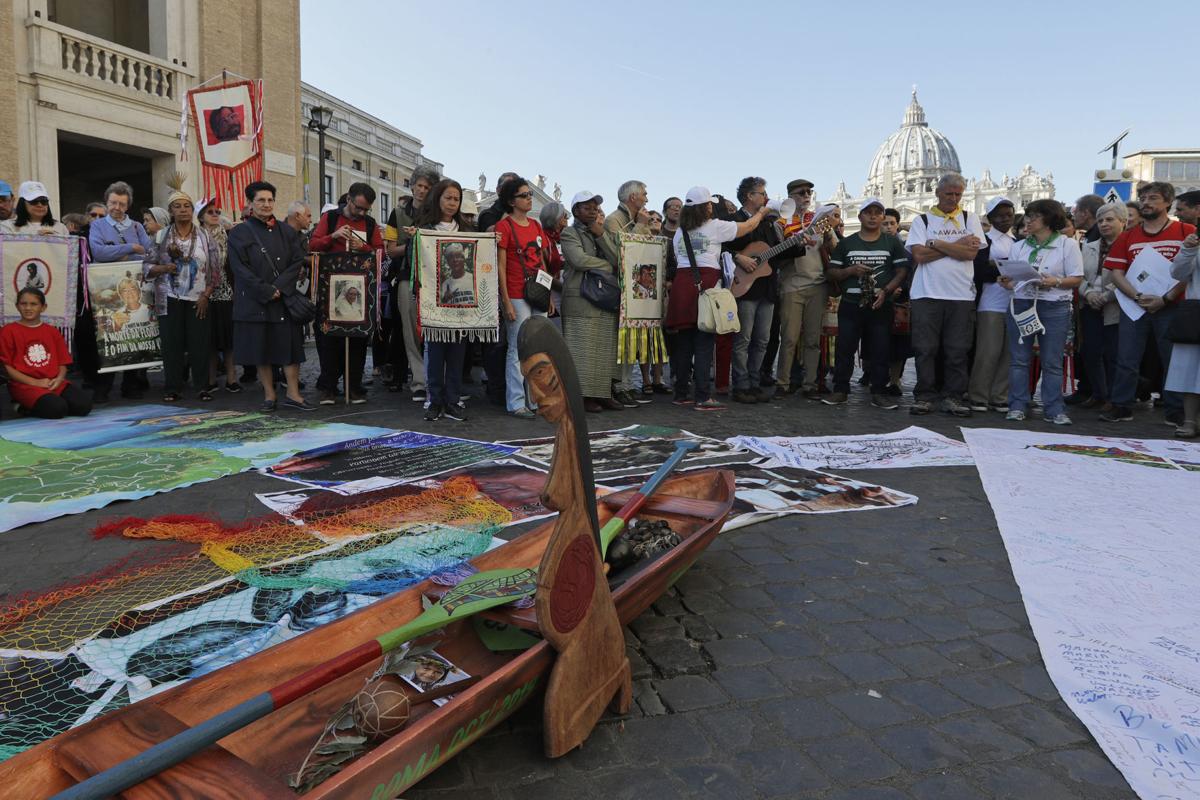 In this photo taken on Oct. 19, members of Amazon indigenous populations prepare for a Via Crucis (Way of the Cross) procession from St. Angelo Castle to the Vatican.— AP Photo/Andrew Medichini

Participants in the Amazon synod attend a Mass celebrated by Pope Francis on the occasion of the World Missionary Day, at St. Peter's Basilica at the  , on Oct. 20. —Angelo Carconi/ANSA via AP

In this photo taken on Oct. 19, members of Amazon indigenous populations prepare for a Via Crucis (Way of the Cross) procession from St. Angelo Castle to the Vatican.— AP Photo/Andrew Medichini

VATICAN CITY (AP) — Catholic bishops from across the Amazon called Saturday for the ordination of married men as priests to address the clergy shortage in the region, an historic proposal that would upend centuries of Roman Catholic tradition.

The majority of 180 bishops from nine Amazonian countries also called for the Vatican to reopen a debate on ordaining women as deacons, saying "it is urgent for the church in the Amazon to promote and confer ministries for men and women in an equitable manner."

The proposals were contained in a final document approved Saturday at the end of a three-week synod on the Amazon, which Pope Francis called in 2017 to focus attention on saving the rainforest and better ministering to its indigenous people.

The Catholic Church, which contains nearly two dozen different rites, already allows married priests in Eastern Rite churches and in cases where married Anglican priests have converted. But if Francis accepts the proposal, it would mark a first for the Latin Rite church in a millennium.

Still, the proposals adopted Saturday also call for the elaboration of a new "Amazonian rite" that would reflect the unique spirituality, cultures and needs of the Amazonian faithful, who face poverty, exploitation and violence over the deforestation and illegal extractive industries that are destroying their home.

Francis told the bishops at the end of the voting that he would indeed reopen the work of a 2016 commission that studied the issue of women deacons. And he said he planned to take the bishops' overall recommendations and prepare a document of his own before the end of the year that will determine whether married Catholic priests eventually become a reality in the Amazon.

Some conservatives and traditionalists have warned that any papal opening to married priests or women deacons would lead the church to ruin. They accused the synod organizers and even the pope himself of heresy for even considering flexibility on mandatory priestly celibacy.

They vented their outrage most visibly this week when thieves stole three indigenous statues featuring a naked pregnant woman from a Vatican-area church and tossed them to into the Tiber River.

The statues, which conservatives said were pagan idols, were recovered unscathed by Italy's Carabinieri police. One was on display Saturday as the synod bishops voted on the final document, which was approved with each paragraph receiving the required two-thirds majority.

The most controversial proposals at the synod concerned whether to allow married men to be ordained priests, to address a priest shortage that has meant some of the most isolated Amazonian communities go months without a proper Mass. The paragraph containing the proposal was the most contested in the voting, but received the required majority 128-41.

The proposal calls for the establishment of criteria "to ordain priests suitable and esteemed men of the community, who have had a fruitful permanent diaconate and receive an adequate formation for the priesthood, having a legitimately constituted and stable family, to sustain the life of the Christian community through the preaching of the Word and the celebration of the sacraments in the most remote areas of the Amazon region."

The paragraph ended by noting that some participants wanted a more "universal approach" to the proposal — suggesting support for married priests elsewhere in the world.

The celibate priesthood has been a tradition of the Latin Rite Catholic Church since the 11th century, imposed in part for financial reasons to ensure that priests' assets pass to the church, not to heirs.

History's first Latin American pope has been particularly attentive to the argument in favor of ordaining "viri probati" — or married men of proven virtue — in the Amazon, where Protestant and evangelical churches are wooing away Catholic souls in the absence of vibrant Catholic communities where the Eucharist can be regularly celebrated.

The second-most contested proposal concerned ordaining women deacons, a type of ministry in the church that allows for preaching, celebrating weddings and baptisms, but not consecrating the Eucharist.

The synod bishops didn't come straight out and call for women deacons, but rather for the Vatican's 2016 commission of study on the female diaconate to hear from the synod about "our experiences and reflections" and make a decision. The paragraph passed 137-30.

Francis in 2016 agreed to a request from the international organization of religious sisters to set up a study commission to explore the role of women deacons in the early church, answering an insistent call for women to have greater decision-making, governance and ministerial roles given that the Catholic priesthood is reserved for men.

The commission delivered its report to Francis but the results were never released and Francis subsequently said there was no agreement among commission members.

Supporters of women deacons say there is no reason to preclude a ministry for women that existed in the early church; opponents say ordination of women deacons would spell the start of a slippery slope toward ordaining female clergy.

"I'm a supporter of having more married priests, though this Amazon experiment is the wrong way to go about it," tweeted Damian Thompson, conservative commentator and associate editor of Britain's The Spectator. And he added: "Women deacons will mean women priests and a Great Schism on the scale of 1054."

The pro-ordination group Women's Ordination Conference praised the decision to reopen debate on the diaconate, but said it was time to move beyond study commissions.

"Now is the time for the Church to not just recognize women's leadership, but transform its institutions to honor their leadership sacramentally," the group said in a statement.

In addition to deacons, the final document called for the institution of a new ministry of "women leadership of the community" and for a revision of a 1960s church law to allow women to be trained as lectors and acolytes.

And it said cryptically that for a limited time a bishop can hand over "the exercise of pastoral care" of a community to "a person" who is not a priest, but not necessarily male, either.

However, in a sign that women still have a ways to go in church decision-making parity, no woman was allowed to vote on the final document.

Thirty-five women, among them religious sisters and superiors, were appointed as experts to the synod and contributed to the final document, but only the 181 men cast a vote.

While the question of married priests and women deacons dominated debate outside the synod hall, the bulk of the meeting and the 33-page final document focused more on the environmental destruction of the Amazon and the plight of its peoples.

Indigenous leaders thanked Francis for highlighting their concerns and for the words expressed, but called for action to put an end to the illegal logging and fishing, building of hydroelectric dams and mining that are ruining their homelands.

"Throughout the rainforests of Latin America, we are battling governments that treat us like criminals for saying no to projects that would dam our rivers, carve roads of ruin through our forests and turn our land into lifeless deserts and our rivers into liquid poison," said COIA, the coordinating body of indigenous organizations that participated in the synod.