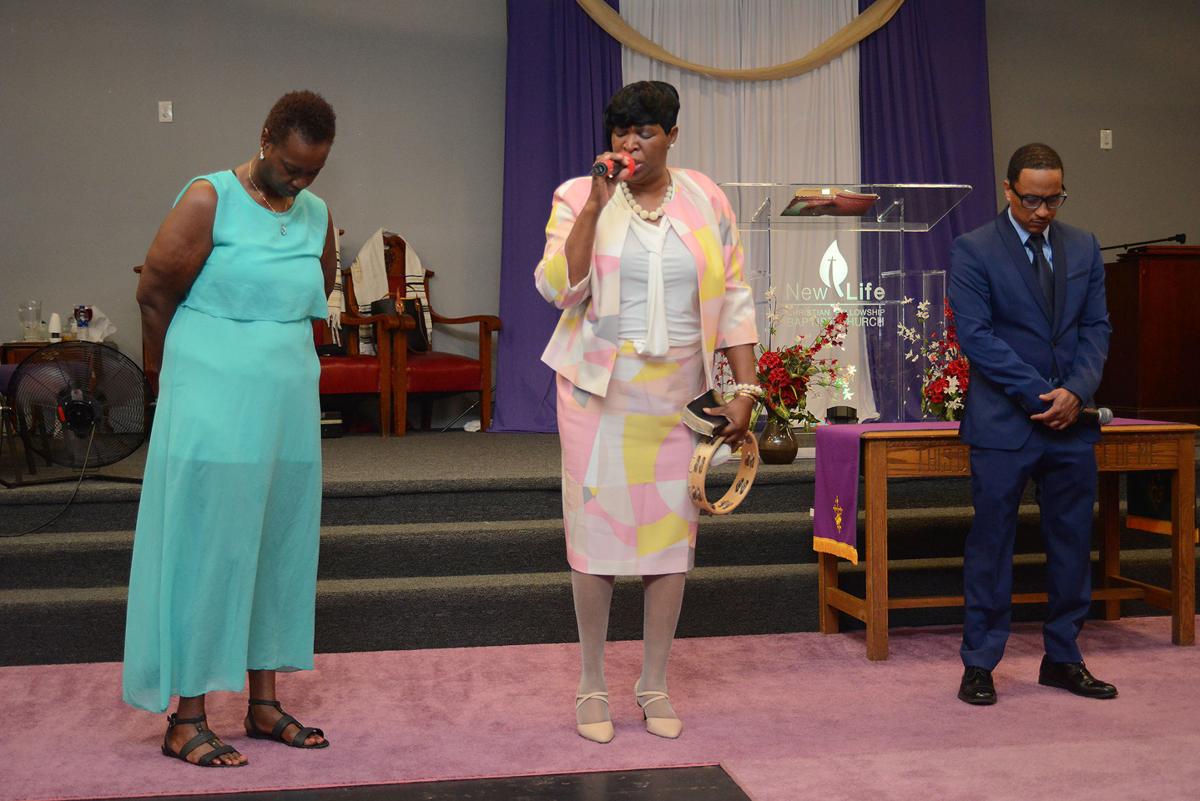 The Rev. Martha Bennett, center, leads the the church in prayer. 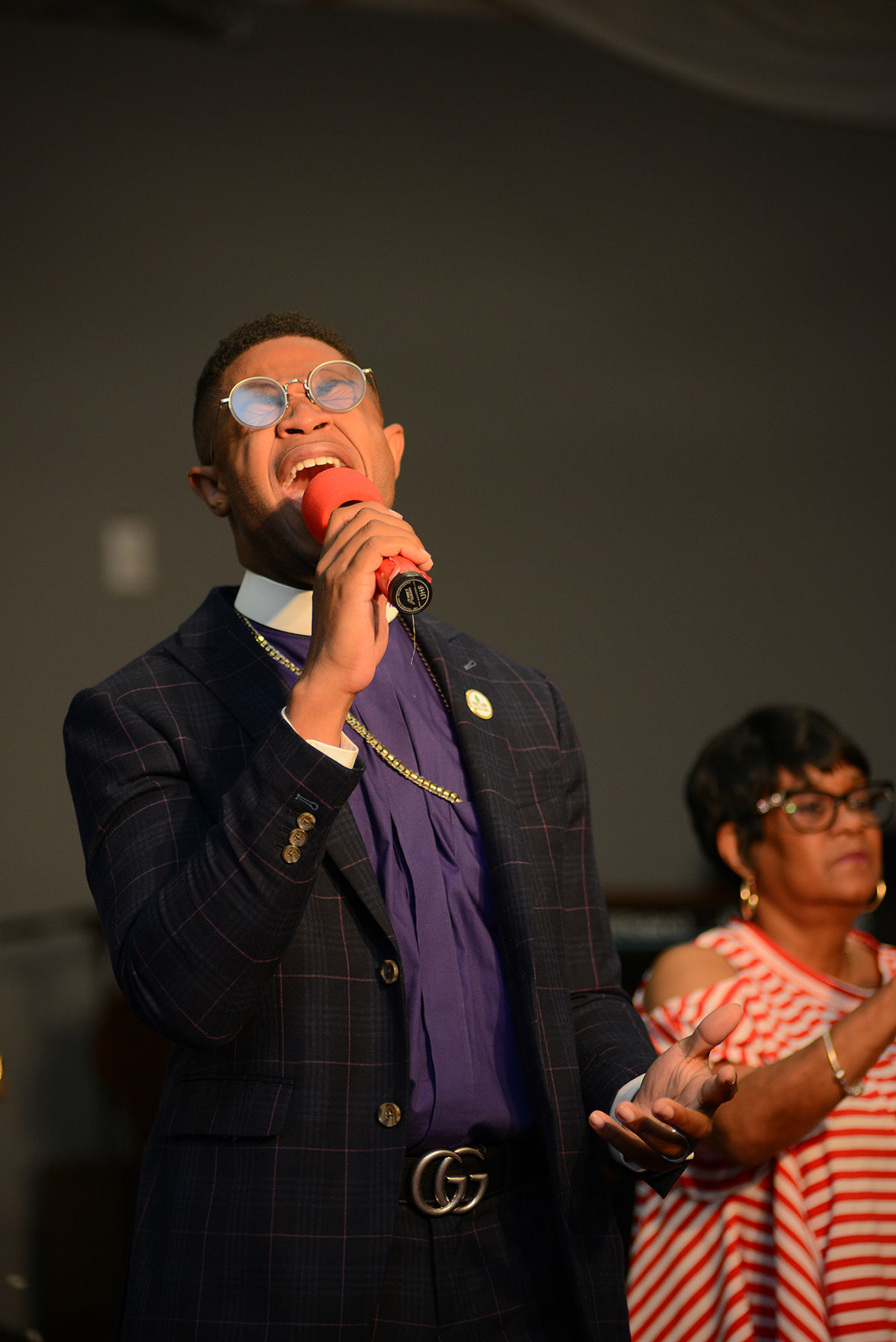 The Rev. Juwan Bennett sings during the praise and worship moment. 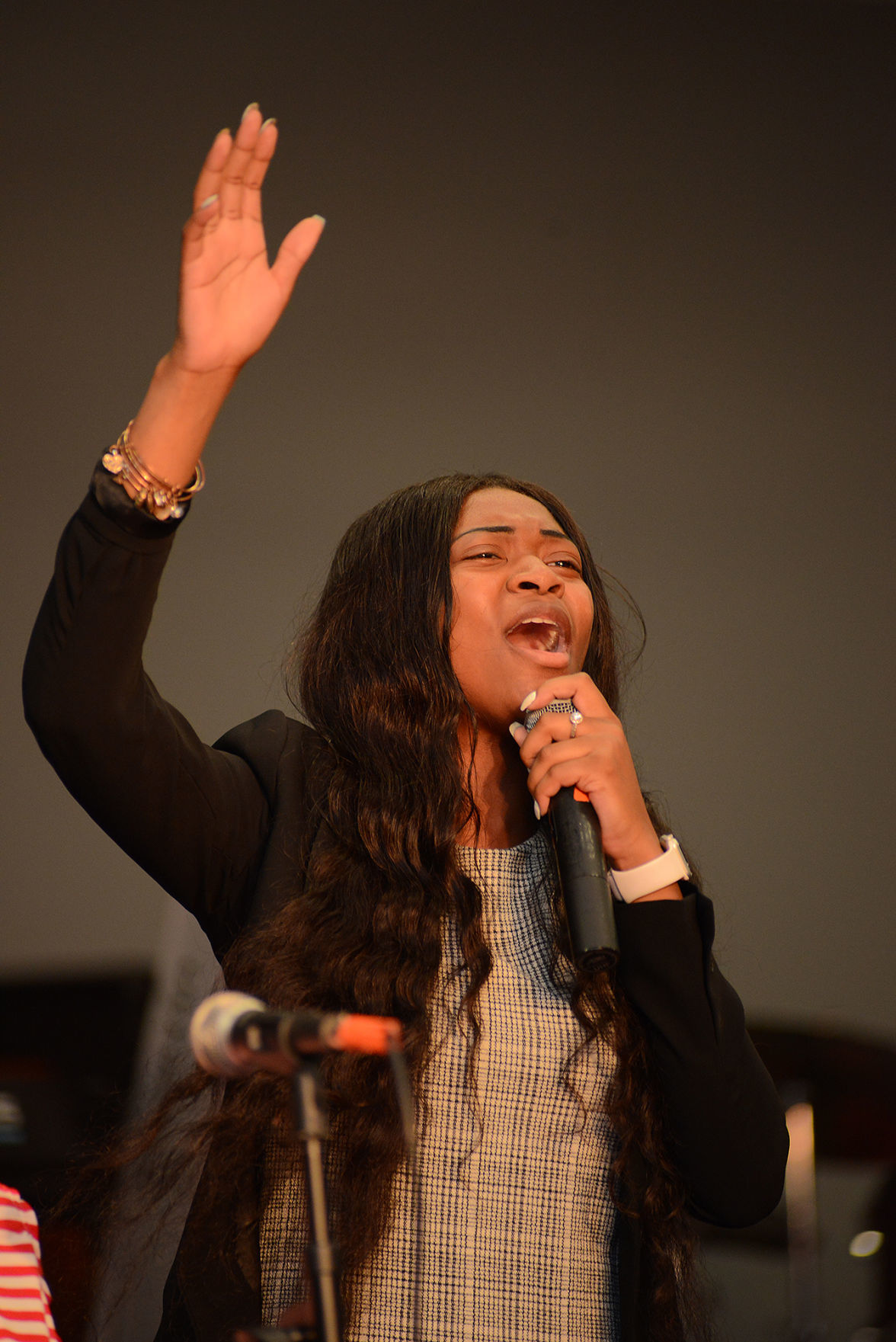 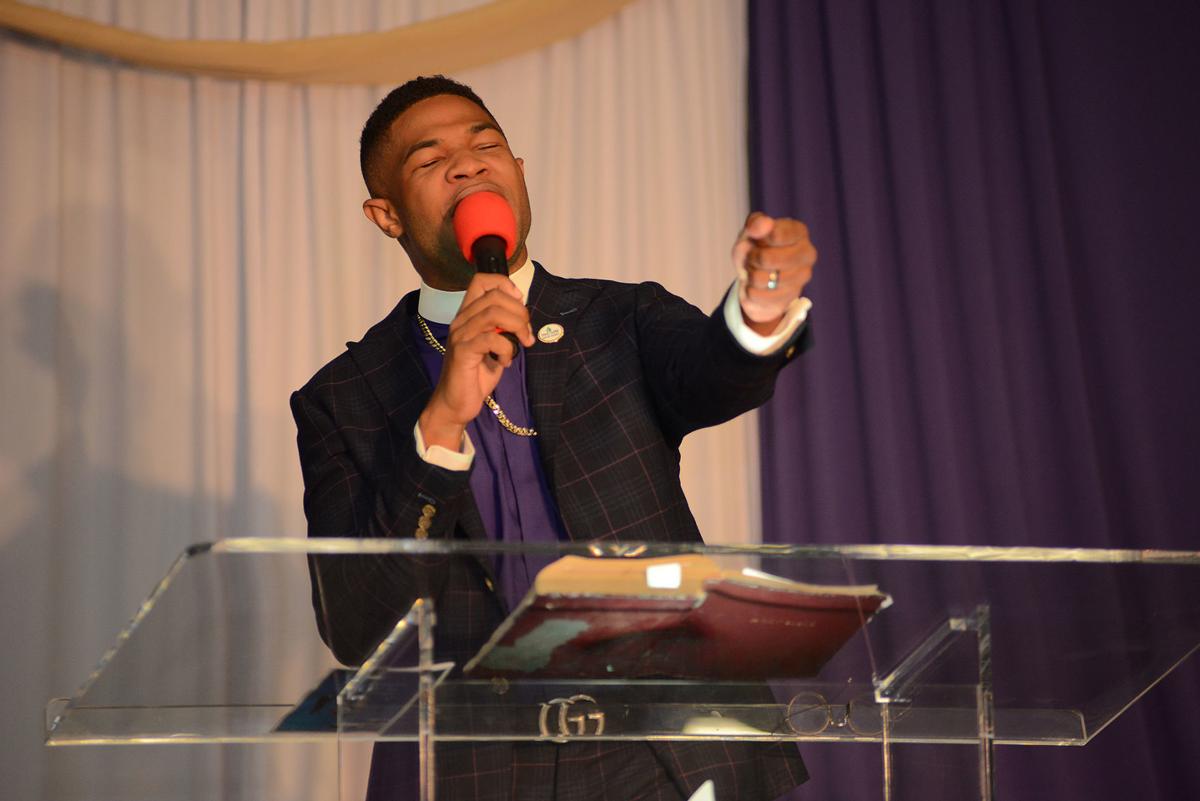 The Rev. Juann Bennet speaks to the congregation. 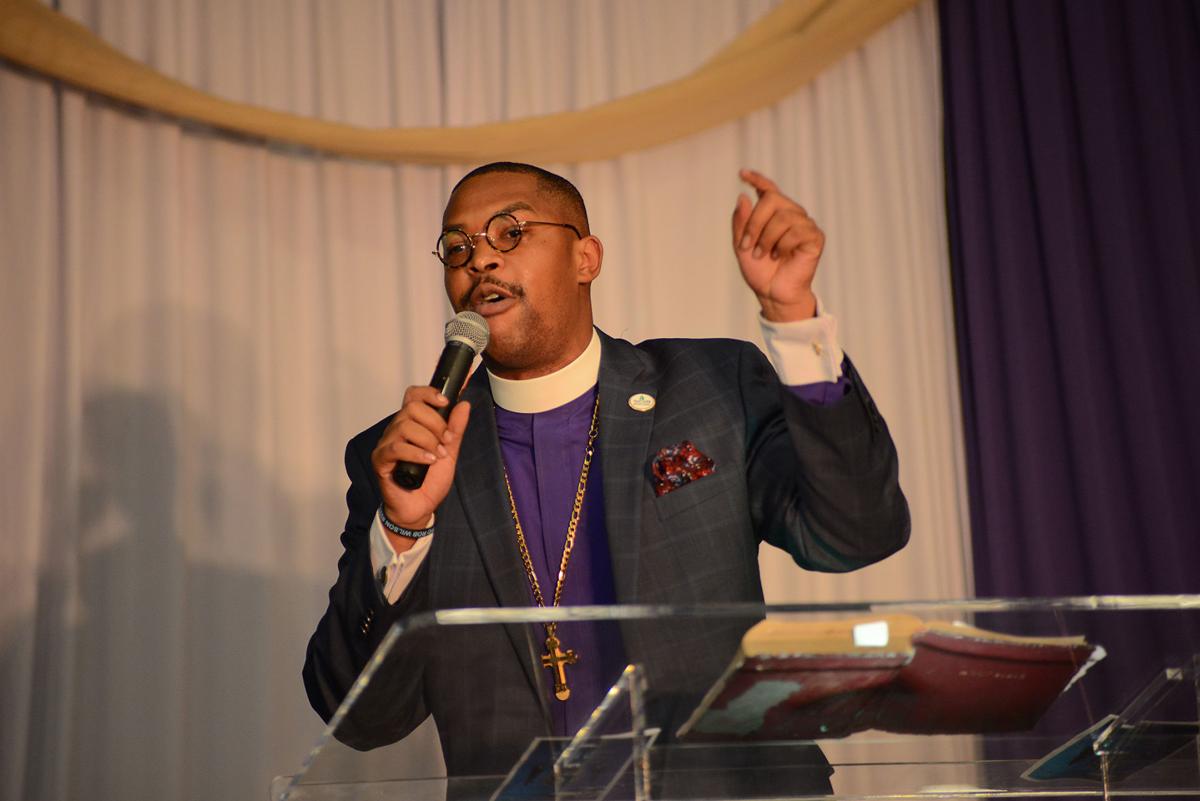 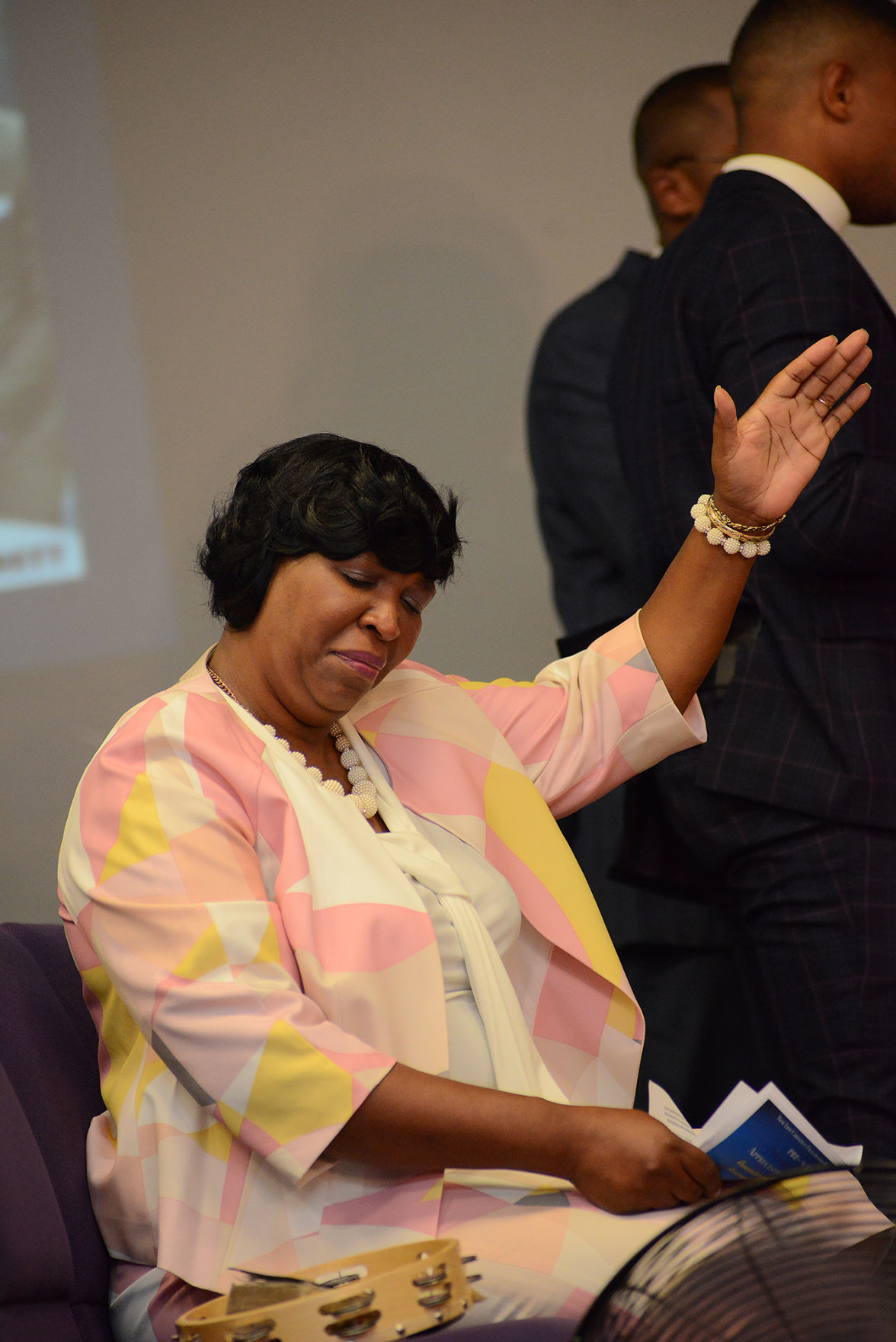 The Rev. Martha Bennett, center, leads the the church in prayer.

The Rev. Juwan Bennett sings during the praise and worship moment.

The Rev. Juann Bennet speaks to the congregation.

New Life Christian Fellowship Baptist Church welcomes all to join in worship at the 5701 Magnolia St. location, but don’t come expecting church as usual when you get there. Founded in 2014, with 10 members, this young church has since outgrown several previous locations and the growth continues.

One reason for the growth, perhaps, is the church’s refusal to hold tradition and ritual over the needs of people and their communities.

Guided by its motto: “No more church as usual,” New Life isn’t a church isolated behind its walls but regularly emerges from behind those walls to interact with the people beyond, as did their chief shepherd, Jesus Christ.

“Our mission is ‘No more church as usual,’ meaning that we try to be a church that praises and worships God. We’re not bound by traditions that others might have, we just try to give God the glory,” said New Life’s senior pastor, Rev. Antonio R. Bennett II.

Another thing that distinguishes the church from others is the youthful energy that is apparent when entering the sanctuary during Sunday worship service.

“One of the things we try to do is to make the Word alive and to make it exciting to people,” Bennett said.

“Another thing is that I pride myself on is that, even though we are a Baptist church, it doesn’t take all day to get it right. We start on time at 9:30 a.m. and we try to end at about 10:40 a.m. Within that 70 minutes we try to make it powerful and impactful so that people can take the Word of God home with them.”

Bennett lights up the podium with his sermons and the members of the congregation jump to their feet in response to his messages numerous times during service, sometimes clapping in approval, other times shouting affirmations but always engaged and energized.

Despite the church’s growth, the ministers of New Life have never lost their connection to the people.

Pastor Juwan Z. Bennett refers to himself as “the people’s pastor,” and the idea of belonging to and working for the people characterizes the ministry and its operations.

“One of the things I believe is that the pastor should be accessible to the people, especially in this age of social media and the internet. We try to be accessible to people so that if you see me on the street you can stop me and have prayer, or if you need to contact me, or if something might be going on in your home life, we make ourselves as accessible as possible,” Antonio Bennett said.

This includes all people:

“I would describe our church as one that is about making disciples, one that goes out into the community trying to meet the needs of the people,” Bennett said.

The senior pastor, a police officer by profession, said that not only do police officers attend New Life, but several returning citizens call the church home as well.

During services, an Islamic imam was in attendance with the New Life family — evidence of its mission to accommodate people of all walks of life, backgrounds and religious affiliations.

“That’s one of the things that we try to do is to bridge the gap and let them know that God’s message is for everybody, and when you create an environment that doesn’t make people feel excluded, they can come in and we can build a relationship from there,” he said.

Pastors Antonio Bennett and Juwan Bennett both make sure the members can contact them without going through some complex chain of command, and also stream their services online and maintain a social media connection so that they can reach the wider public as well.

Dashea Morrison, who has been a member almost since the beginning, is a neighbor to the pastor and first heard him speak as a guest speaker at a local church. When she discovered that he later formed his own ministry, she made it a point to visit and later joined.

“The motto of our church is ‘No more church as usual,’ so you’re free to worship the way you want to worship, and nobody looks at you like you’re crazy,” said Morrison. “It’s like a family atmosphere.”

When Morrison says “family atmosphere,” she means it literally.

What makes people fall in love with the ministry of New Life?

“It’s the Word of God, it’s a Bible-based church and it’s the way [the senior pastor] explains it, the way they teach it, and it’s more accommodating to the 21st century so you can relate to it,” said Morrison.

Morrison said the church is energetic and she appreciates that the church has so many young who participate in its activities. Morrison said she has several young members of her family who attend willingly and enthusiastically.

“They’re here every Sunday because they want to come. It’s not that we make them come, they get up on their own like they get up for school. They want to be here. The energy is here, and they love it and I love it.”

“I like the hospitality that they’ve shown us, the focus that they have on the people in the congregation but also people beyond the walls of the church, just that they have that passion and desire to minister to other people,” said Goccia.

Although New Life Christian Fellowship might not be “church as usual,” it still has some of the active ministries found in traditional churches such as praise dancing, choirs and active outreach ministries.

More than 220 years after the first ordained Black minister in the U.S. became a pastor in a small, predominantly white community in Vermont a…