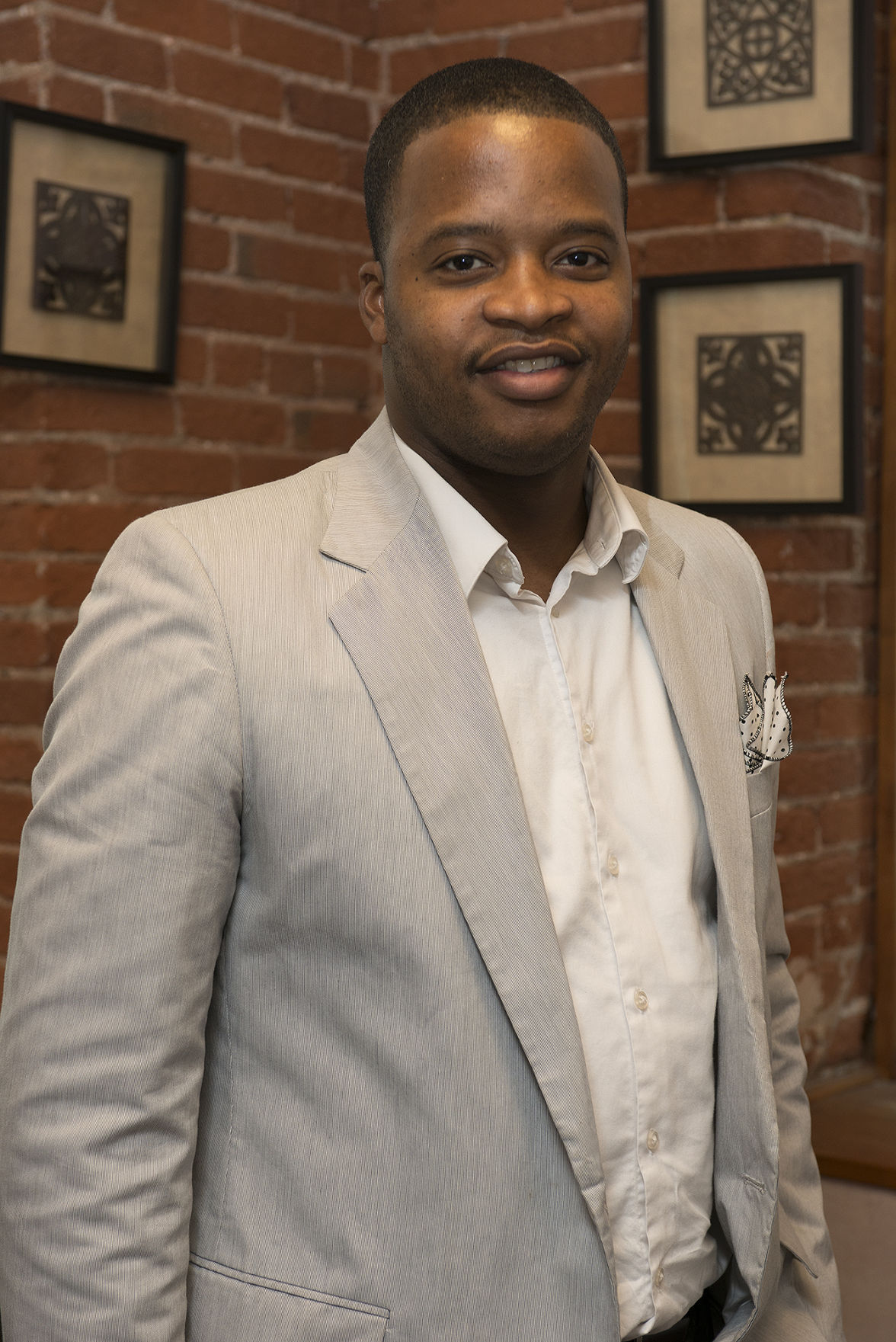 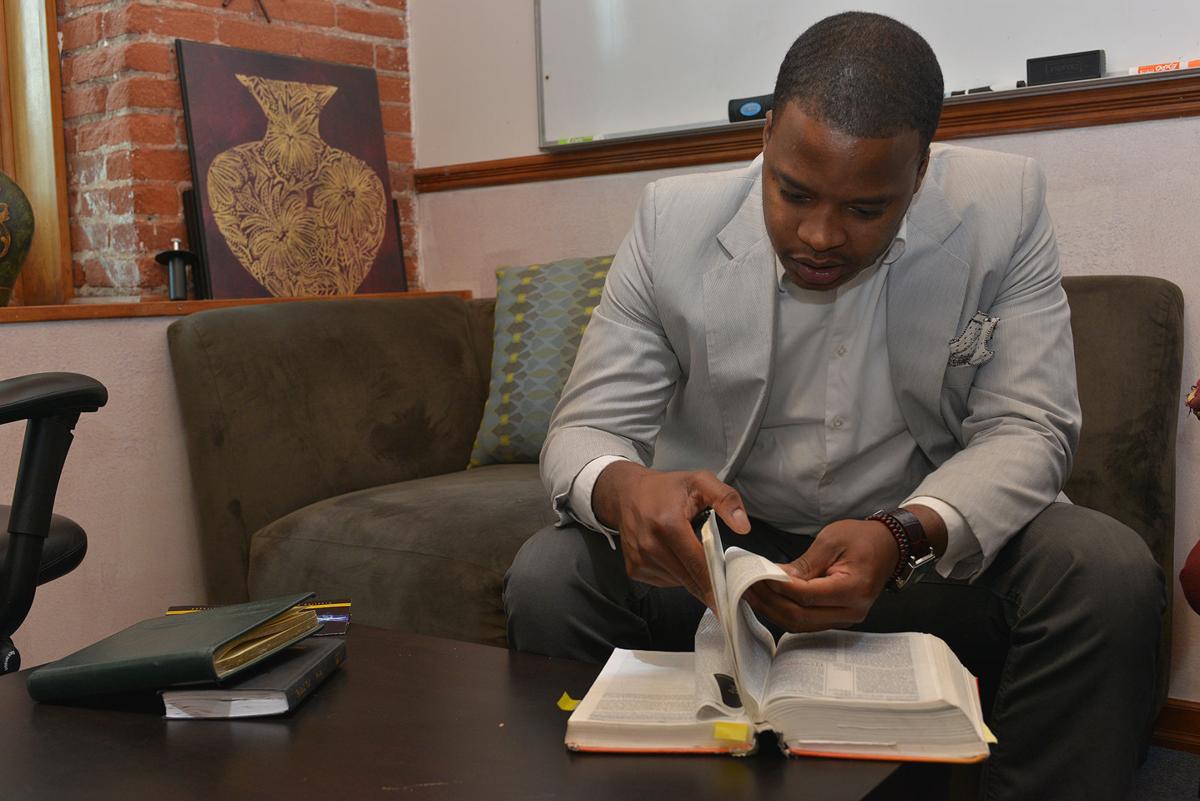 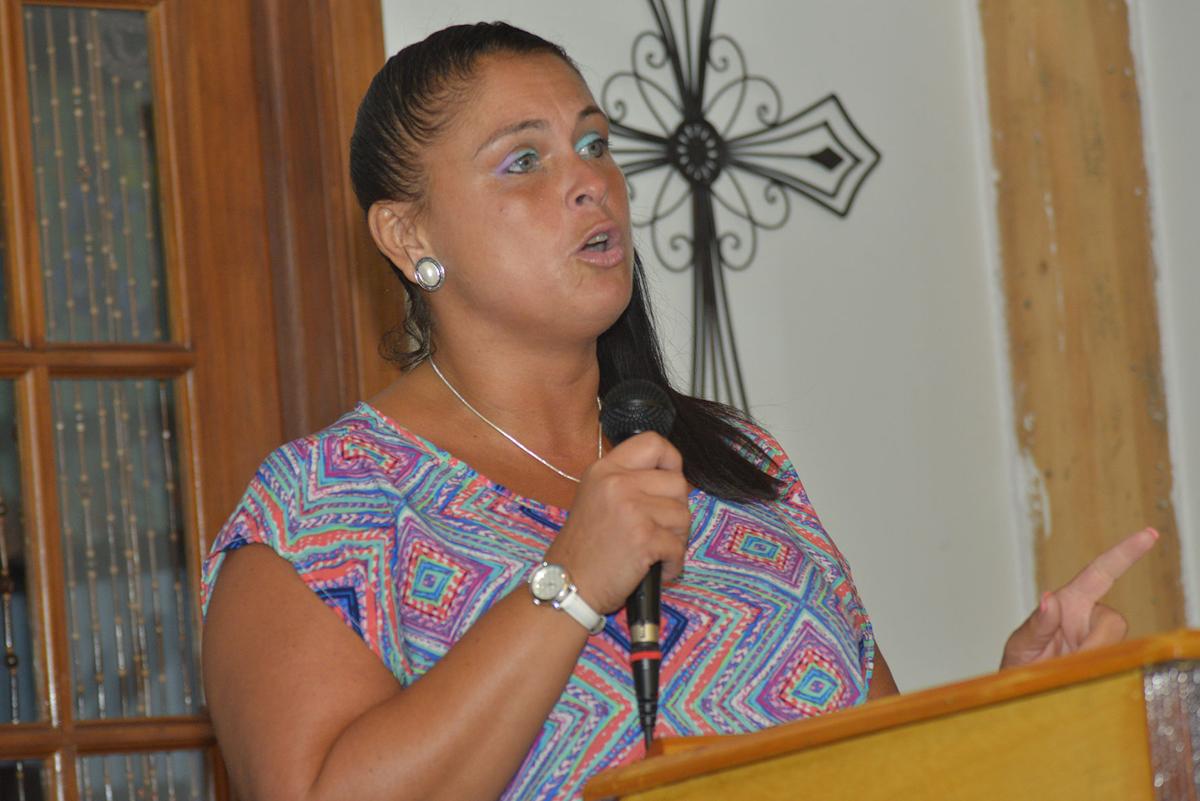 Valerie Ann Todd leads the church with a prayer. 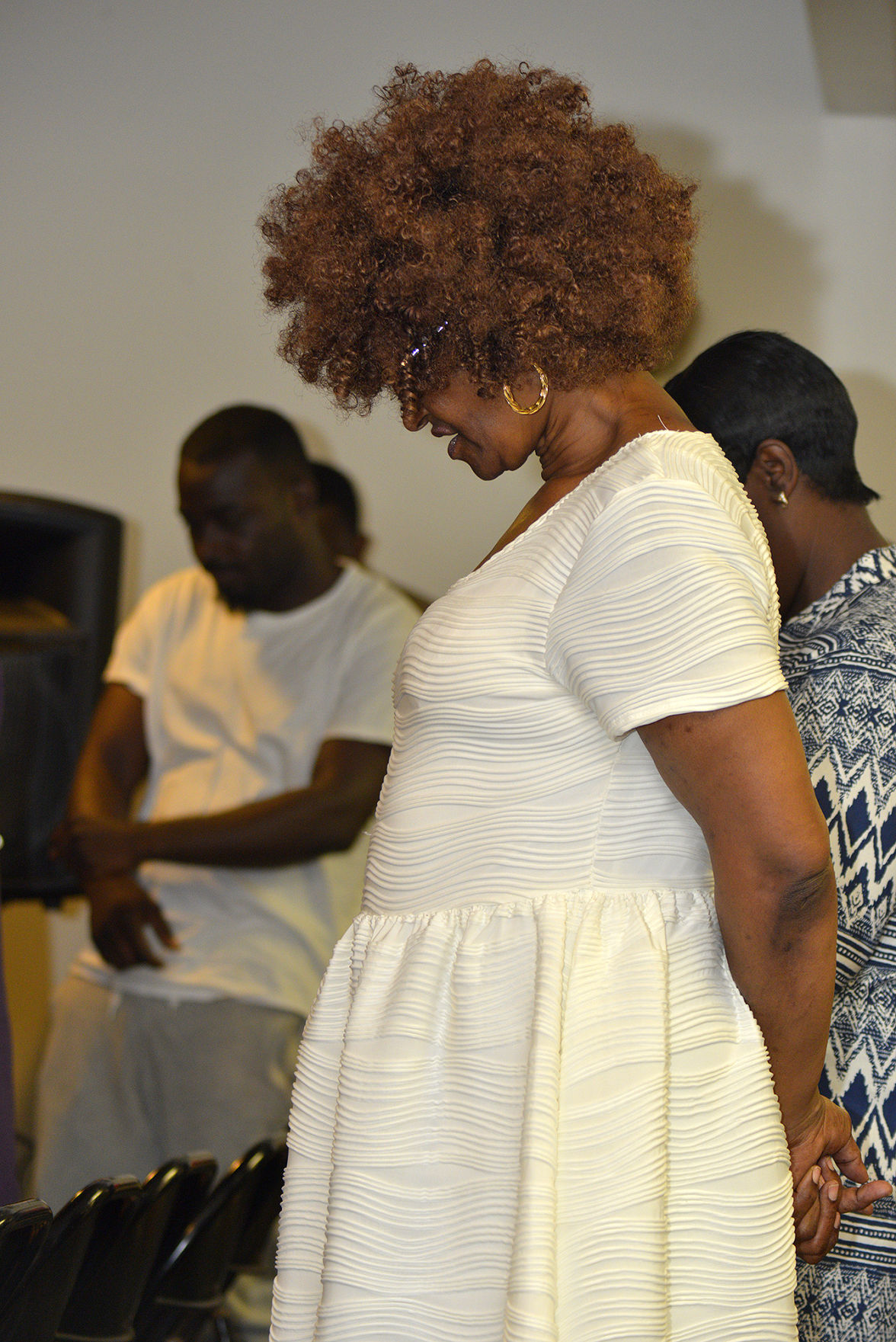 A member of the congregation prays. 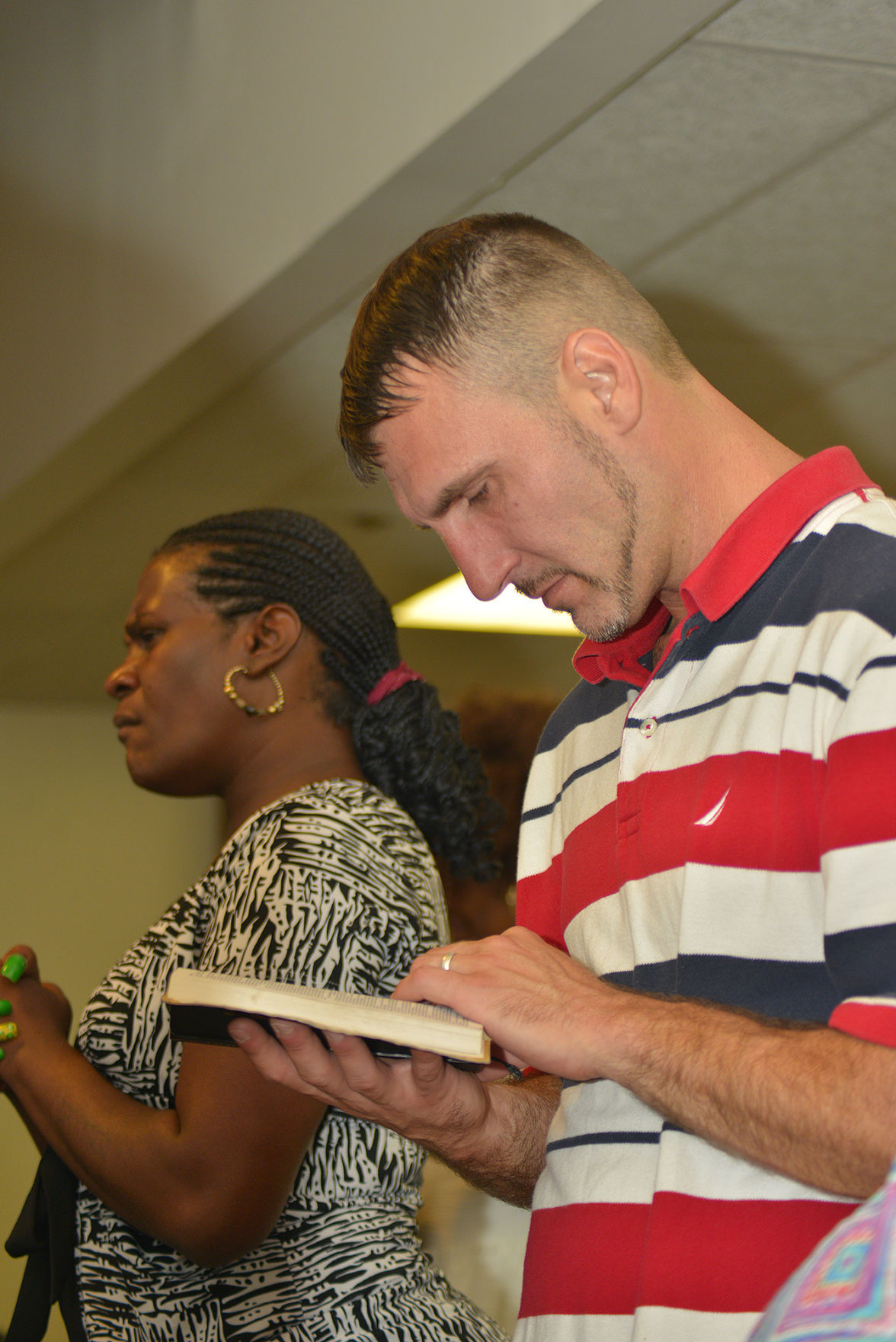 A member of the congregation reads the Scripture. 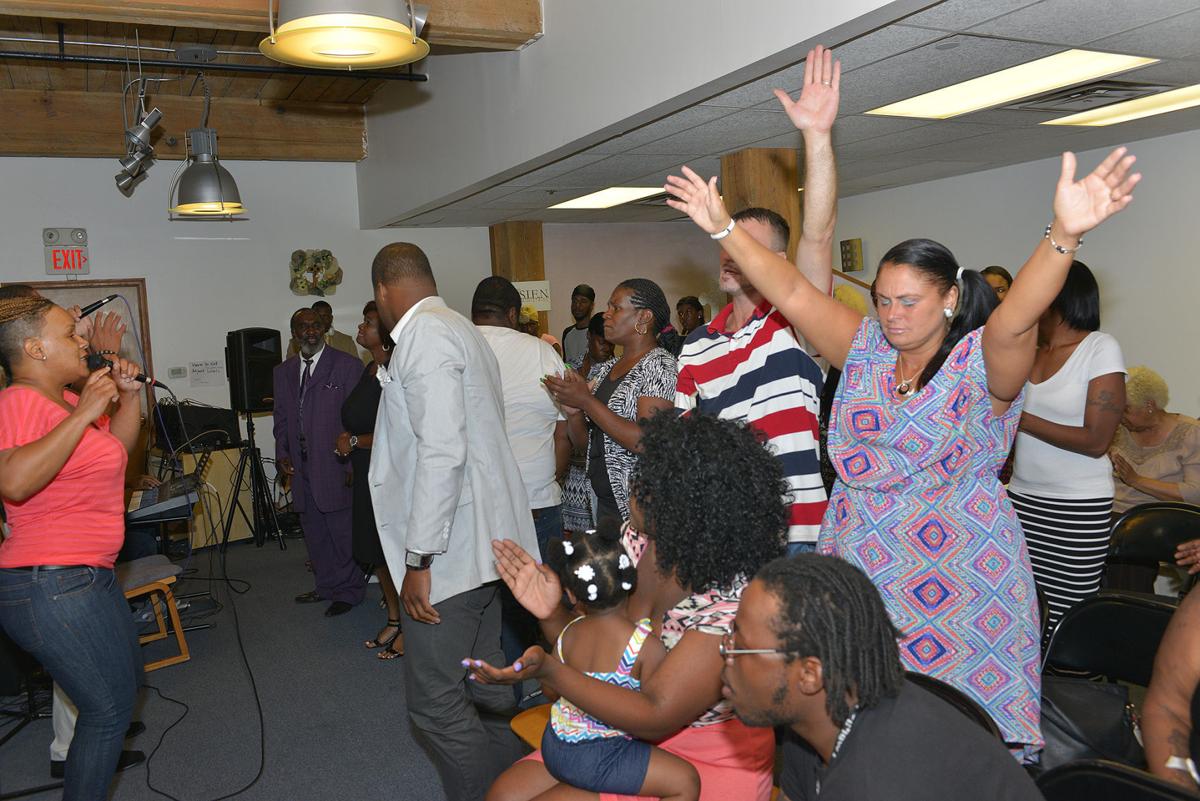 The congregation sings with Praise and Worship Team. 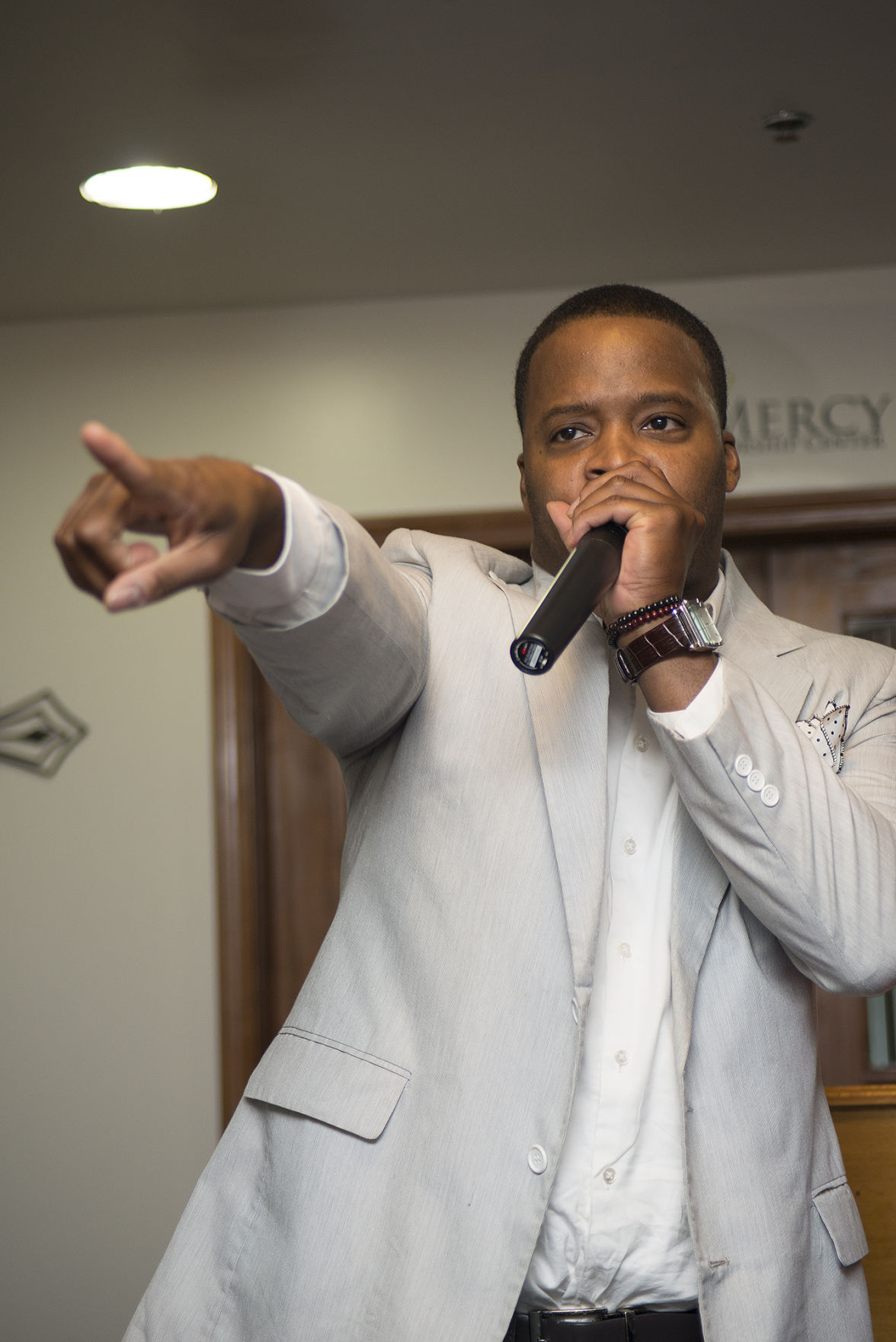 The pastor delivers a sermon. 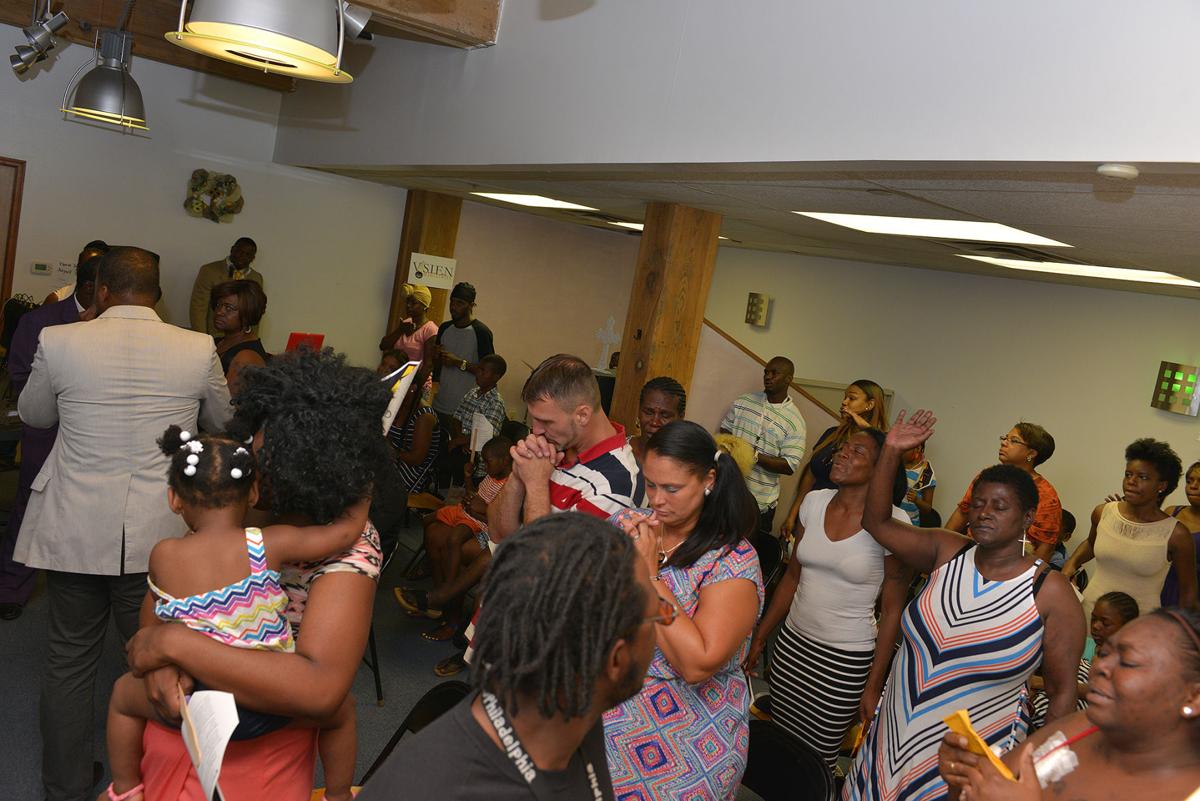 Valerie Ann Todd leads the church with a prayer.

A member of the congregation prays.

A member of the congregation reads the Scripture.

The congregation sings with Praise and Worship Team.

The pastor delivers a sermon.

North Philadelphia’s Mercy Worship Center is an unusual church. It was unusual when it was founded and it may remain unusual to continue to change people’s lives.

Established two and half years ago by Senior Pastor Jamal Vann, Mercy began in a bar in North Philadelphia. Ministers would enter the bar and evangelize to patrons, while they were surrounded by shelves of alcohol.

Now the church still reaches out to people who are in the trenches of life, but with its own sanctuary, a modest-size space that occupies the first floor of an apartment high-rise.

The congregation sits on folding chairs and two leather couches. There is no pulpit, just a strip of floor in the front of the room, where the preacher preaches behind a podium and the praise and worship team sings.

Adjacent to that area, against the wall, the church deejay is set up, with a table and laptop. He provides backdrop music for the praise and worship team and other parts of the service. He is one-third of a band that includes a drummer and a keyboardist.

For Vann, the differences of Mercy are what make it able to reach the congregation, about 60 percent of whom are young Black adults with low incomes or who receive public assistance.

“The goal is to create an opportunity for people that would not fit in, in a normal church setting, feel welcome,” he said. “Right now we have a combination of young and older people, people in recovery and coming from incarceration, people who have been in church a long time — seasoned members and very new-born Christians. I try to think how can we be different but Biblically in sync.”

The fact that Mercy has a deejay to supplement their music ministry is one example of this “different” approach that Vann references.

Another unique practice is that Vann or one of the other musicians will rap a song during praise and worship.

On the Sunday of The Tribune’s visit, one of the praise and worship team members, Nathaniel Dixon, broke into a rap after he’d finished singing a song.

“It just comes,” he said. “Pastor Vann made me comfortable with the idea that God is using me to use my gift for him.”

Dixon used to be a secular rapper and posted most of his music to YouTube, where he said he had upwards of 250,000 views. That number has dwindled since he started Christian rap, he said, to “not even 100” views.

“I’m using hip-hop to gather the youth and let them know it’s a war between the devil and God and they have to make a decision,” he said. “They see what’s happening, they hear it, but they are still blinded.”

The service at Mercy frees individuals to make it their own and express themselves.

At one point during the July 12 service, after the praise and worship had completed a song, one of the elders of the church, Gertrude Callender, began singing, “Anytime You Want Me,” by herself.

“God speaks to my spirit in music, telling me ‘This is what I need you to say because I need them to recognize,’” Callender said.

She noted as a Psalmist, her job “is to help the congregation get to that place where they open up and allow God to do what he needs to do.”

She and several other members worked in this capacity on the Sunday of the Tribune’s visit, during which four to five different members caught the Holy Ghost at different points in the service. At one time, three women had fallen on the floor, all at one time.

“If this is God’s house, then he should have full reign,” Callender said. “Pastor Vann didn’t tell people to sit down...he [allows] the congregation to get what they have to get, not ‘I have a time limit.’”

A few Sundays ago, according to Monee Lawano-Hill, a candidate for baptism, the Spirit moved in a major way for her when Vann got a “demon out of me” during the altar call prayer.

Vann said he anointed Hill’s head with oil and begin praying for her, which caused her to “scream” and her body to “jerk.”

Hill said such a deliverance is an important piece of what Mercy has brought to her life, along with the lessons she has learned from attending the services.

She added that her “life, in every way, emotionally and mentally,” has grown for the better by attending Mercy.

“I love it because it’s love. Everybody has love for one another and I’ve learned that no matter what you do, God is always going to love you,” she said.

A member since October 2014, Shileen Bynum, agreed. “Everybody is accepted and everybody is loved,” she said. “This is a church for everybody.”

To further her point, Bynum noted that some people “come in traditional church clothes” and others come in “work clothes. It’s church done differently.”

Outreach ministries for members and the community at Mercy include a drug and alcohol counseling program and a mentoring program, Peasant Kings.

The drug and alcohol support group meets on Fridays and since it has been established, reaches five to 20 people at any given time.

Vann expects by uplifting the downtrodden, he will recruit them and form an army of sorts to continue the work and touch even more people.

“Gold told me these are the people who are going to be leaders of your church — former convicted felons, former drug addicts and torn-up people,” he said. “Often Jesus had intimate interactions with people that society would not deem to be Christlike so our intention is to be very open to those kinds of people.”