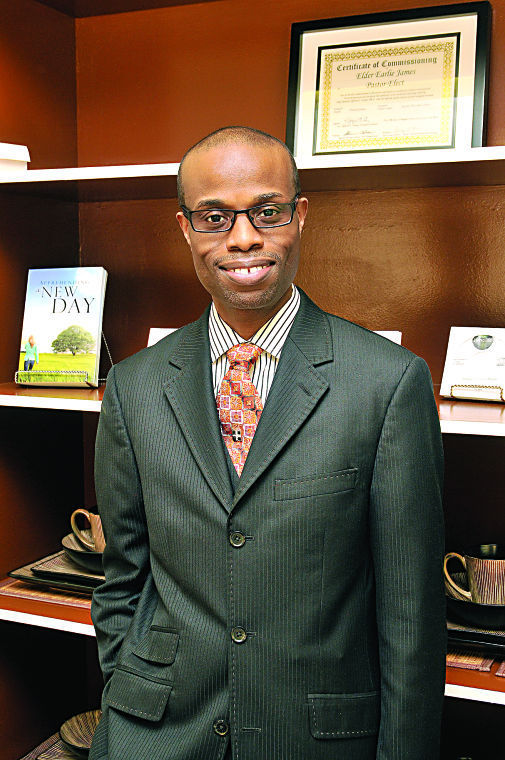 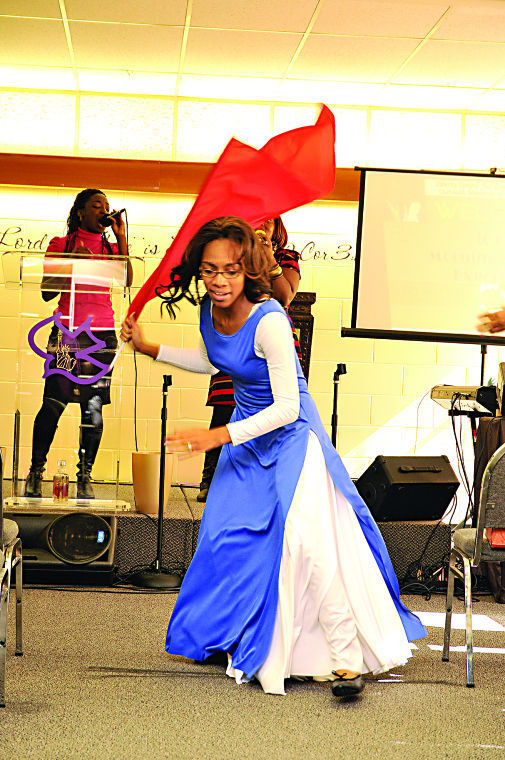 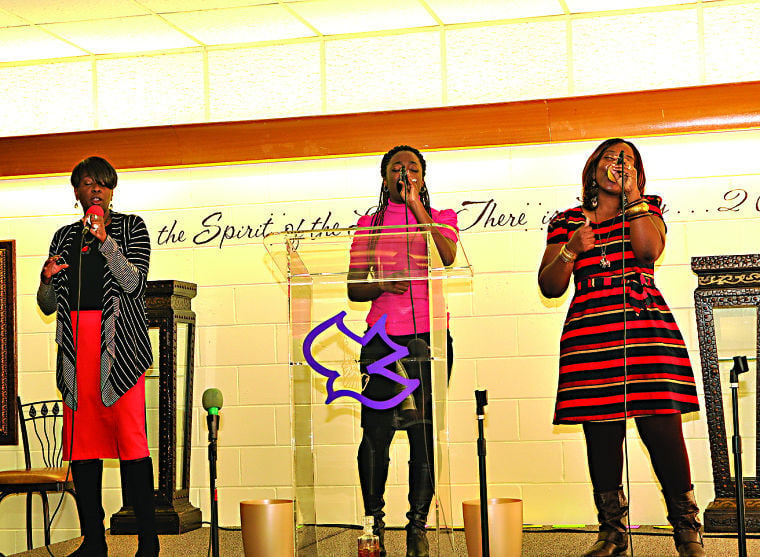 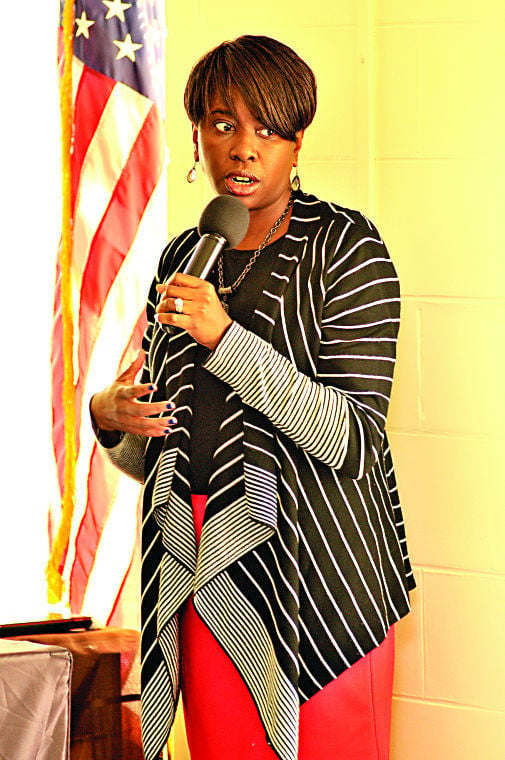 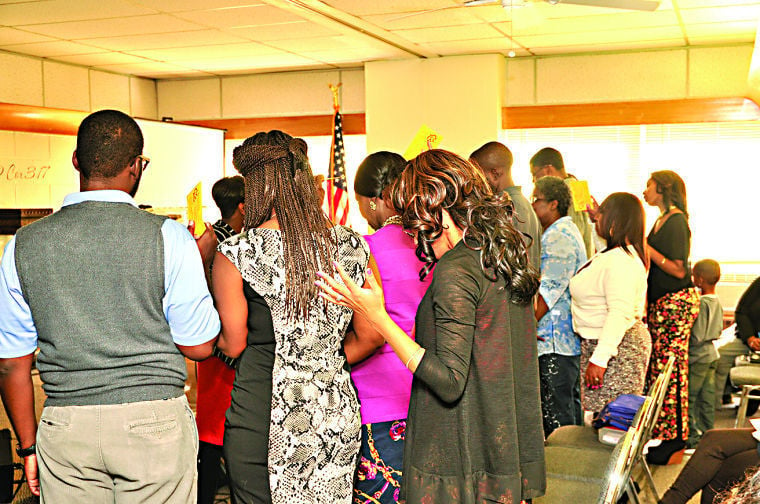 The congregation prays together. 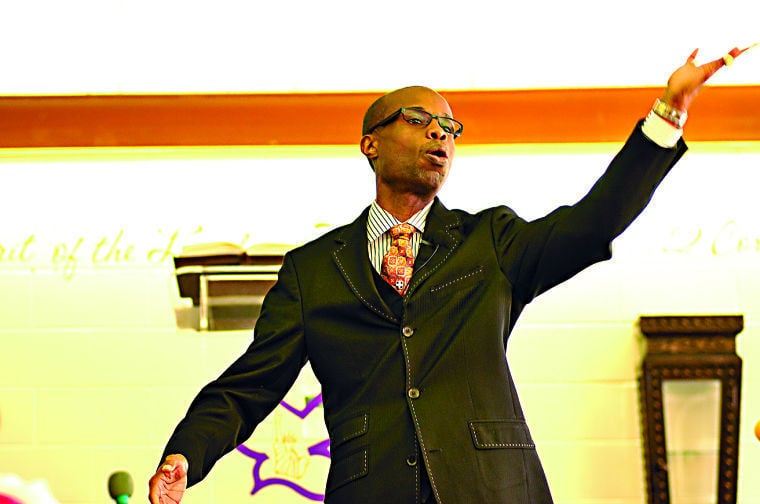 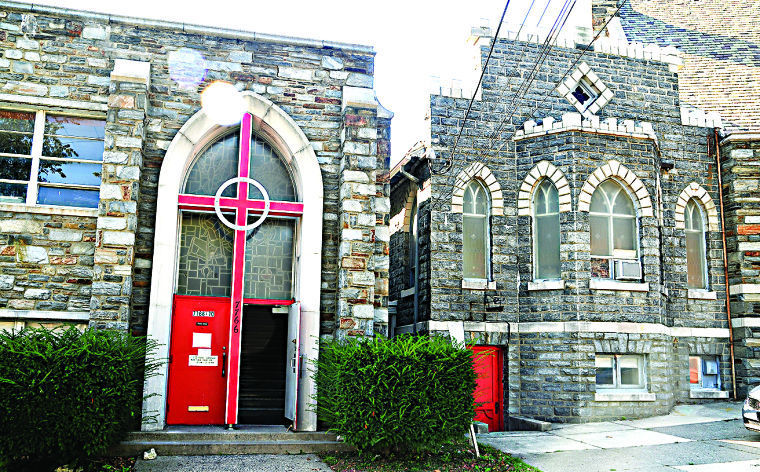 The congregation prays together.

Operated on the resources of faith and prayer, the Liberty Temple Full Gospel Church of Philadelphia-West changes lives with a message of faith, miracles and empowerment.

The church is small, occupying the top floor of another building which is also a church. On the Sunday of the Tribune’s visit, there were about 30 people in attendance, almost completely filling the room where the congregation worships.

But neither the size of neither the church nor the congregation is indicative of the power that members say exists in Liberty. Several attested to having experienced miracles,, and others point to the impact the church has had on the community. For the pastor, whether it was an act of God or just the work of a faithful member, it is all in line with the church’s divine purpose.

“[Liberty] is really about helping people find what their life purpose is about,” said Earlie James, the pastor. “There are a lot of terms used in the church. We hear words like ‘destiny’ and ‘purpose’, but sometimes those are not clearly defined. So we put a lot of emphasis on defining what it means when I say ‘purpose’. My purpose is my reason for existence. How do I reach that state, instead of destiny just evolving?”

To get members to this level, James chooses to teach in his sermons, explaining what the Scripture means and how it applies to people’s daily lives. He also asks questions throughout the sermon — not rhetorical ones. The congregation actually answers him.

During his second Sunday teaching on “Advanced Faith,” he taught about the difference between the feelings of the mind, the heart and the power of positive thinking — probing to a level where he regularly used scientific examples to make his points.

“When you see adversity that is trying to block you, talk to it,” he said. “[You] frame life by the way that [you] talk. The reason [your] mood elevator goes down is because [your] brain produces a chemical in response to [your] perception. If you never change the way you perceive your days, your days will never change.”

For Liberty members, James’ teaching style is highly effective. They don’t feel as if someone is talking over their heads.

“We kept coming because of the message we were getting. It was so relatable,” said Cody Williams. She started attending the church in July and her husband, M. Williams, came along soon after. He agrees with his wife about James’ teaching.

“I love the way he breaks things down,” he said. “You feel what he is saying. It’s a lot of people that pretend. He takes that away. He quotes from the Bible what he is speaking. That takes any doubt away as far as foul play.”

But the power of words manifests in other ways as well. When they are experiencing trying times, several members have said the prayers and prophesies spoken over them have resulted in miracles.

Linda Mack-Lanier and her husband, Jerry Lanier, have a premature grandchild who was born at the point of 23 weeks’ gestation, and they said they didn’t observe much improvement in his condition until they brought him to the church.

Jerry said after the church prayed over the child, he began noticing differences.

“We’ve seen more activity. He is moving a lot more,” he said. “And we believe he is going to get better.”

Prior to joining the church, the Williams couple said they also had had a divine experience. When Cody attended the church for the first time, Pastor James prayed for her and told her that her husband, who’d been incarcerated, would be home soon. The following Thursday, he was released.

For the Furticks, another married couple, their miracle came in the form of their first-born child — a baby girl.

“We were both told we would not be able to have children without medical intervention” said Laura Furtick. “Some people were saying, ‘Why don’t you adopt or seek other options?’ and I said, ‘No, if God wants me and my husband to have a child, he will give us one.’”

The couple said they believed it was their faith and the church’s prayers that changed everything.

“It was through the teachings of faith, speaking out what you are expecting and reminding ourselves of God’s promise, that we were blessed with a baby girl without medical intervention,” said Laura.

For Pastor James, these outcomes are the result of believers’ faith and God’s power.

“I believe it is a miracle because it requires God’s intervention, but it also requires faith and participation from the person that’s believing God for whatever it is,” he said.

Such conviction explains why James and his wife, Rhonda, are in Upper Darby in the first place.

They migrated from Chicago just to establish Liberty-Philadelphia as part of the Liberty International network of churches, in 2004.

“Outreach was a huge part of how we connected with what people were dealing with,” said James. “When this assignment opened up, we just felt it was what God wanted us to do, so we relocated, packed up everything and moved.”

There are seven Liberties nationwide, located as far south as Florida as far west as California. The James’ began their ministry in West Philadelphia. This year marks their third in Upper Darby, where they plan to stay indefinitely because, they said, there is a lot of work to be done.

Community empowerment is a main goal.

Throughout the past decade they have been in Philadelphia and Upper Darby, the church has helped people with resume-building and interviewing skills. If they choose to do so, members can have “development plans” put together so they can chart “the business of their life.”

“It’s centered on helping them become the individual they desire to be,” said James.

Elder Rhonda James added that the church is currently researching grants to enhance their empowerment efforts with an after-school program and a career and computer skills program for adults.

Other outreach efforts include Christmas gift donations for youths; as-needed provisions for the food pantry downstairs in the building, Thanksgiving food baskets and an annual book bag and school supply giveaway, which Earlie James said has grown to reach 200 children.

“It’s really about helping people live more productive lives,” he said. “So many people desire to change, to improve their quality of life, but they are not knowledgeable about where [they] can go and get that done…but what if you can accomplish that every single week by going to church?”