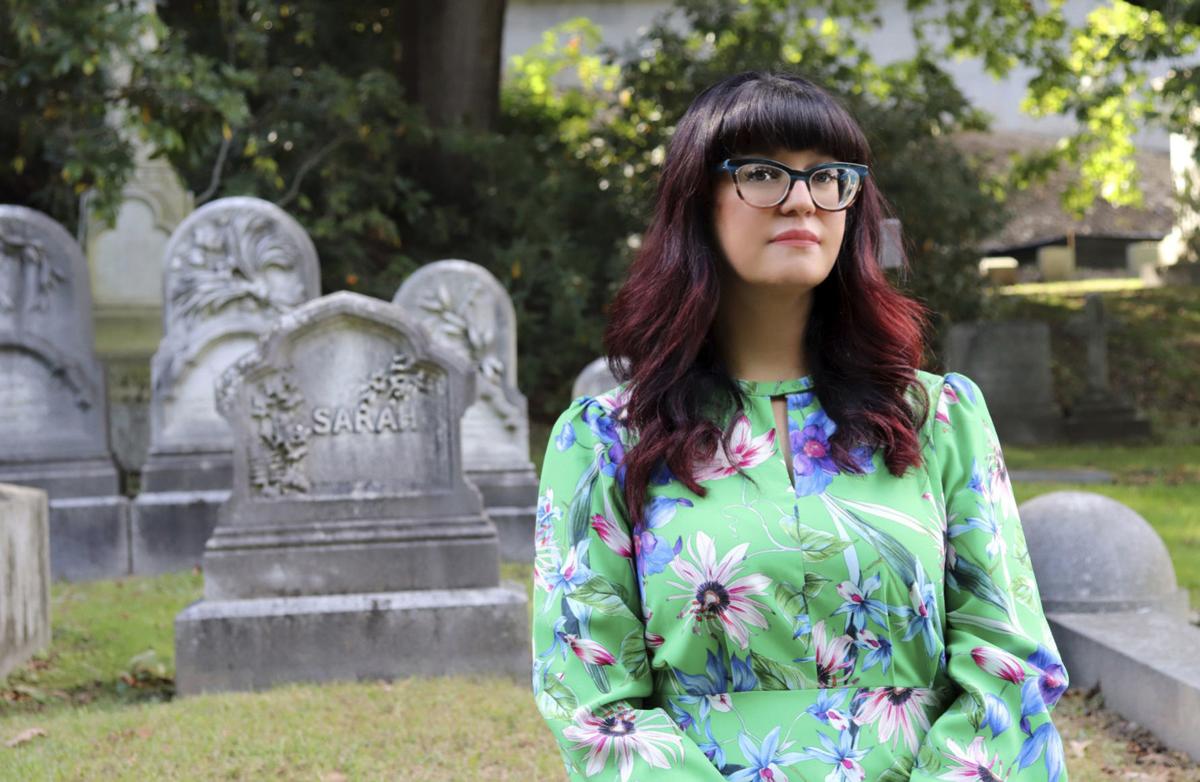 Sarah Chavez poses for a portrait on the grounds of Boston’s historic Mount Auburn Cemetery during Death Salon, an event series hosted by The Order of the Good Death, in 2018. Instead of having her body buried or cremated, Chavez said she would opt to have her human remains turned into soil. — Bruno Huerta/RNS via AP 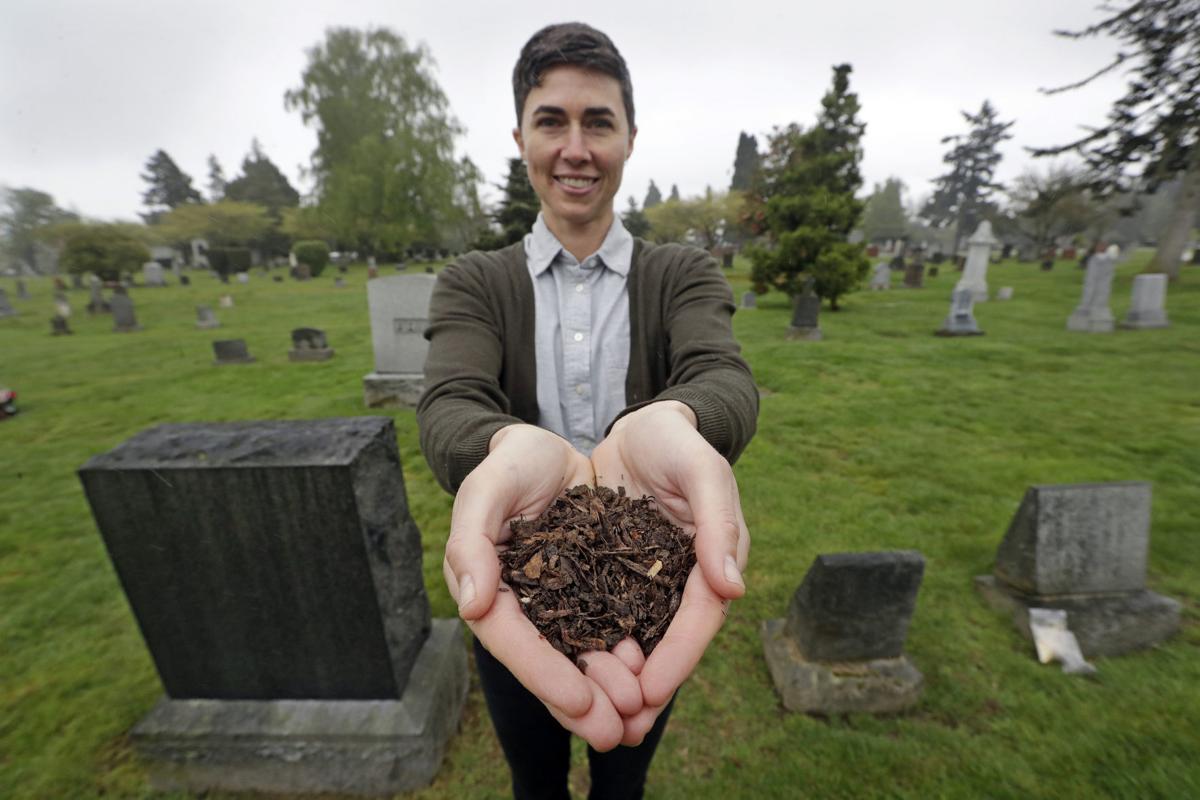 Katrina Spade, the founder and CEO of Recompose, a Seattle company that hopes to use composting as an alternative to burying or cremating human remains, displays a sample of compost material left from the decomposition of a cow using a combination of wood chips, alfalfa and straw. — AP Photo/Elaine Thompson, File

Sarah Chavez poses for a portrait on the grounds of Boston’s historic Mount Auburn Cemetery during Death Salon, an event series hosted by The Order of the Good Death, in 2018. Instead of having her body buried or cremated, Chavez said she would opt to have her human remains turned into soil. — Bruno Huerta/RNS via AP

Katrina Spade, the founder and CEO of Recompose, a Seattle company that hopes to use composting as an alternative to burying or cremating human remains, displays a sample of compost material left from the decomposition of a cow using a combination of wood chips, alfalfa and straw. — AP Photo/Elaine Thompson, File

LOS ANGELES — For Sarah Chavez, it’s important her death reflect the beliefs and values that guided her in life.

That’s why, instead of having her body buried or cremated, Chavez said she would opt to have her remains turned into soil. Death is a natural process, and to Chavez, this would be not only environmentally friendly but also an act of resistance.

“For centuries, women have and still have to fight for control over their bodies in life and in death,” Chavez said. “My body and the right to make decisions about it, I feel strongly should belong to me.”

But first, at least in California, the human composting process has to become legal. The procedure is seen as a more sustainable alternative to cremation, which requires fossil fuels and releases carbon dioxide that pollutes and contributes to climate change. Proponents say families can use the soil to plant a tree or a garden to honor their loved ones.

The process for composting a body was first introduced by the Seattle-based company Recompose. A dead body is broken down through a process known as Natural Organic Reduction by placing the body in a reusable vessel, covering it with wood chips and aerating it, which creates an environment for microbes and essential bacteria. The body, over a span of about 30 days, is fully transformed into soil.

The company in 2018 sponsored a Washington State University report that found the recomposition process to be a safe way to dispose of human remains. Six human research subjects were recomposed during the five-month study.

Following the report, the state of Washington legalized the procedure in 2019, and that law takes effect in May 2020. Recompose plans to open a center in Seattle in 2021 and, according to its website, will charge about $5,500 for its services.

The Catholic Church, however, has denounced it as an undignified way to treat the body. And to others, it still seems like an outlandish way to dispose of human remains.

“What I’m seeing in the comments is comparisons to horror and sci-fi movies, like, ‘Oh we’re going to become Soylent green,” said Chavez, director of The Order of the Good Death, a nonprofit that informs the public about their rights and choices surrounding death.

California Assemblywoman Cristina Garcia, a Democrat, in late February introduced a piece of legislation that would give residents the legal option to have their bodies transformed into soil.

“With climate change and sea-level rise as very real threats to our environment, this is an alternative method of final disposition that won’t contribute emissions into our atmosphere,” Garcia said in a statement.

The bill has yet to have its first hearing, but the California Catholic Conference has come out against the proposed measure.

“We believe that the ‘transformation’ of the remains would create an emotional distance rather than a reverence for them,” said Steve Pehanich, a spokesperson for the California Catholic Conference.

The Vatican, in 2016, released guidelines for the treatment of remains as the use of cremation grew in popularity. It urged Catholics not to scatter the ashes at sea, land or in the air. Instead, the Vatican said, if cremation was chosen, those remains should be kept “in a sacred place,” such as a cemetery or in a church area.

“Even with cremated remains, they directed that they remain in a communal place befitting of the dignity inherent in the human body and its connection to the immortal soul,” Pehanich said.

Human composting is modeled after green burials, a practice that avoids using metal or concrete containers. In a green or natural burial, the body is not prepared with embalming fluids.

“The goal is complete decomposition of the body and its natural return to the soil,” according to the nonprofit Funeral Consumers Alliance.

As noted by the Pew Charitable Trusts, green burials take many forms, “from no-frills burials in conventional cemeteries to sprawling wilderness conservations operations.”

In Tennessee, the Rev. Becca Stevens, an Episcopal priest, helped create Larkspur Conservation, a nonprofit that conserves land and promotes natural burial. The conservation does not accept embalmed remains for burial or allow the use of outer burial containers or burial vaults and instead promotes the usage of biodegradable caskets and shrouds.

As the founder of Thistle Farms — a social enterprise of women who have survived prostitution, trafficking and addiction — Stevens said she encountered poor families struggling and having to borrow money to pay for pricey funeral costs.

This natural burial option, she said, is more affordable, and a percentage of the money that comes in is used to conserve new land.

Stevens said she thought the practice would attract “a lot of resistance, especially in the South.” But, she said, people “are hungry for it” and want “meaning, economic sensibility and care for the earth in planning for their funerals and for the funerals of people they love. “

David Ponoroff, assistant director of Larkspur Conservation, said the demand for natural burials is constantly growing. He said people sometimes are not aware of all the choices available to them, but once they learn what the body can offer even in death, the natural burial alternative “just makes sense,” Ponoroff said.

At Larkspur, the body can feed the trees and wildflowers and also help conserve new land, Ponoroff said.

For Chavez, although a natural burial is a sustainable option, it’s not something she would consider, because “decolonization and indigenous rights are really paramount issues for me.

“Burial on colonized land is not an option that I myself am comfortable with,” she said.

Chavez finds inspiration in the women who played an influential role in paving the way for cremation to be accepted in the U.S. Women were not only among the first people to be cremated in the earliest crematories in the country but were also advocates of the practice, according to the Cremation Association of North America.

Chavez said women viewed their advocacy for cremation “as their moral duty to uphold public health and safety.”

“It was really important to them, considering care for the sick and dying typically fell to women, which honestly not that much has changed,” she said.

Through The Order of the Good Death, Chavez said they seek to address disparities in death among Black trans women, indigenous women, and people in the LGBTQ community. They also advocate for laws and policies that are low cost and environmentally friendly.

“It’s meaningful to me to kind of carry on a historical legacy of women advocating for choices in death care,” she said.