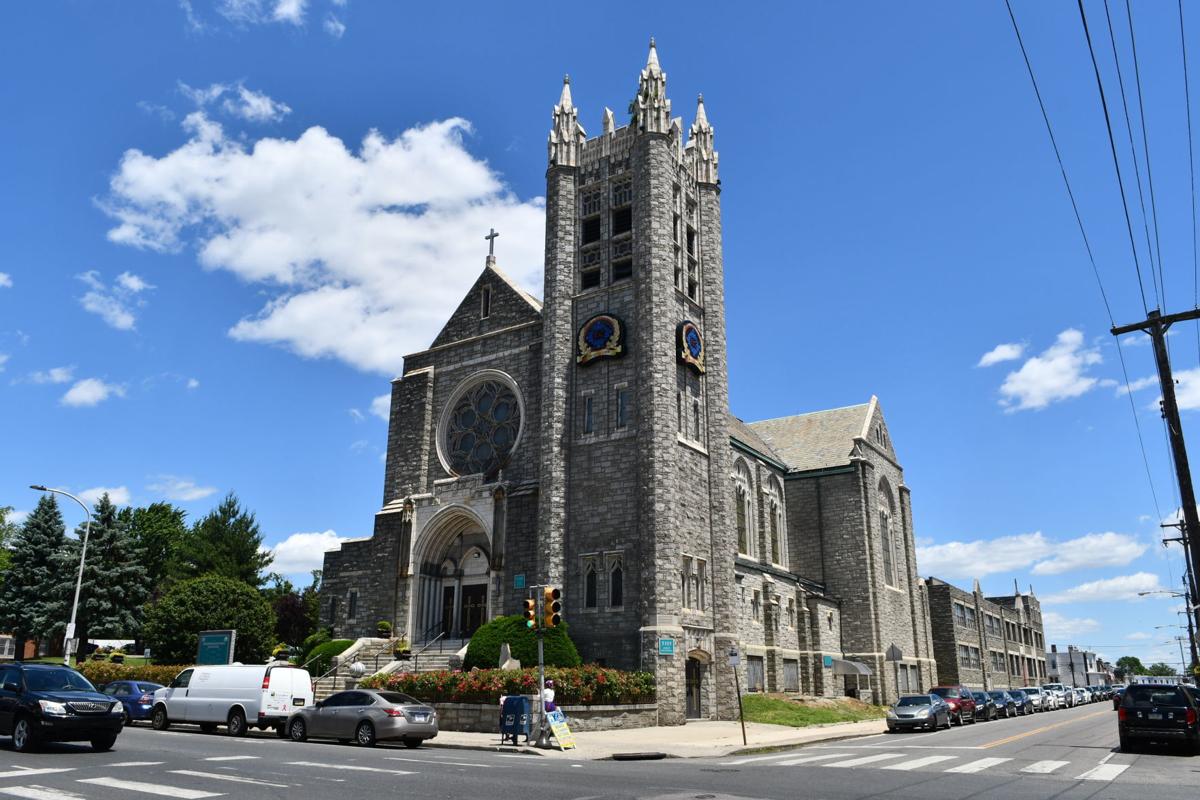 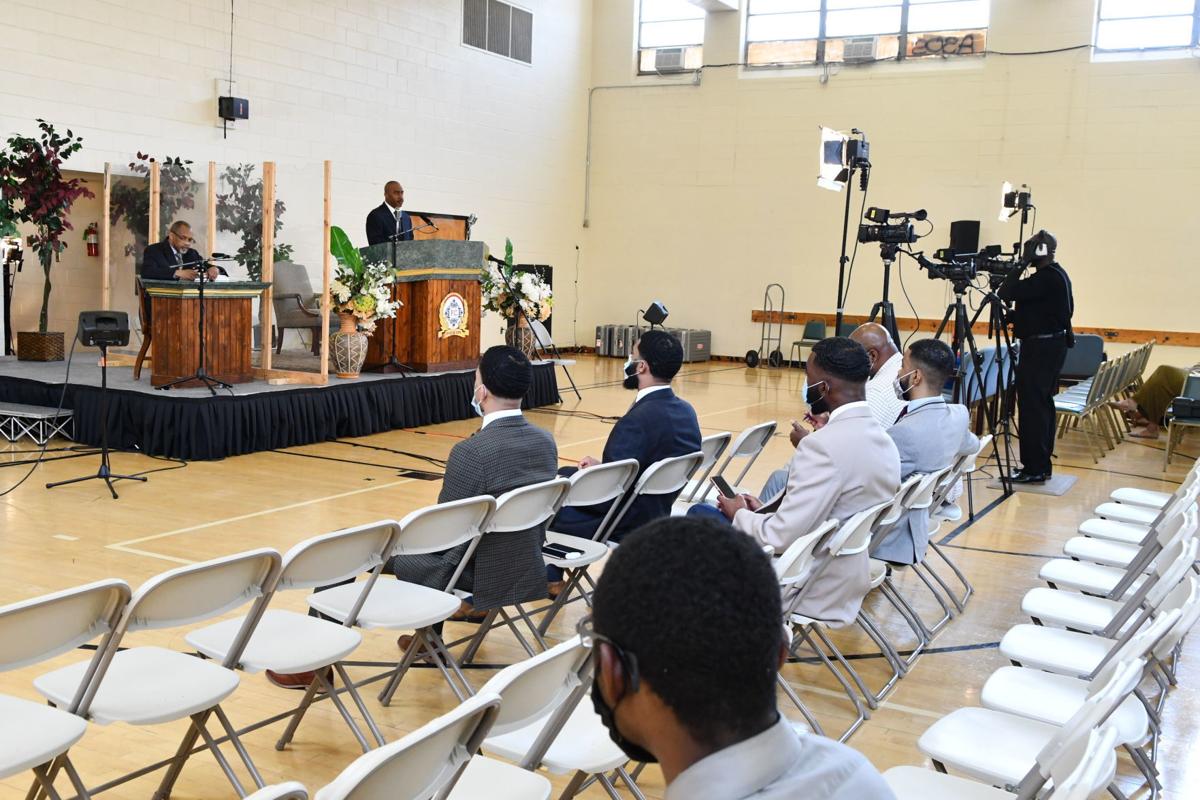 Social distancing is practiced at First Church of the Lord Jesus Christ, Inc. 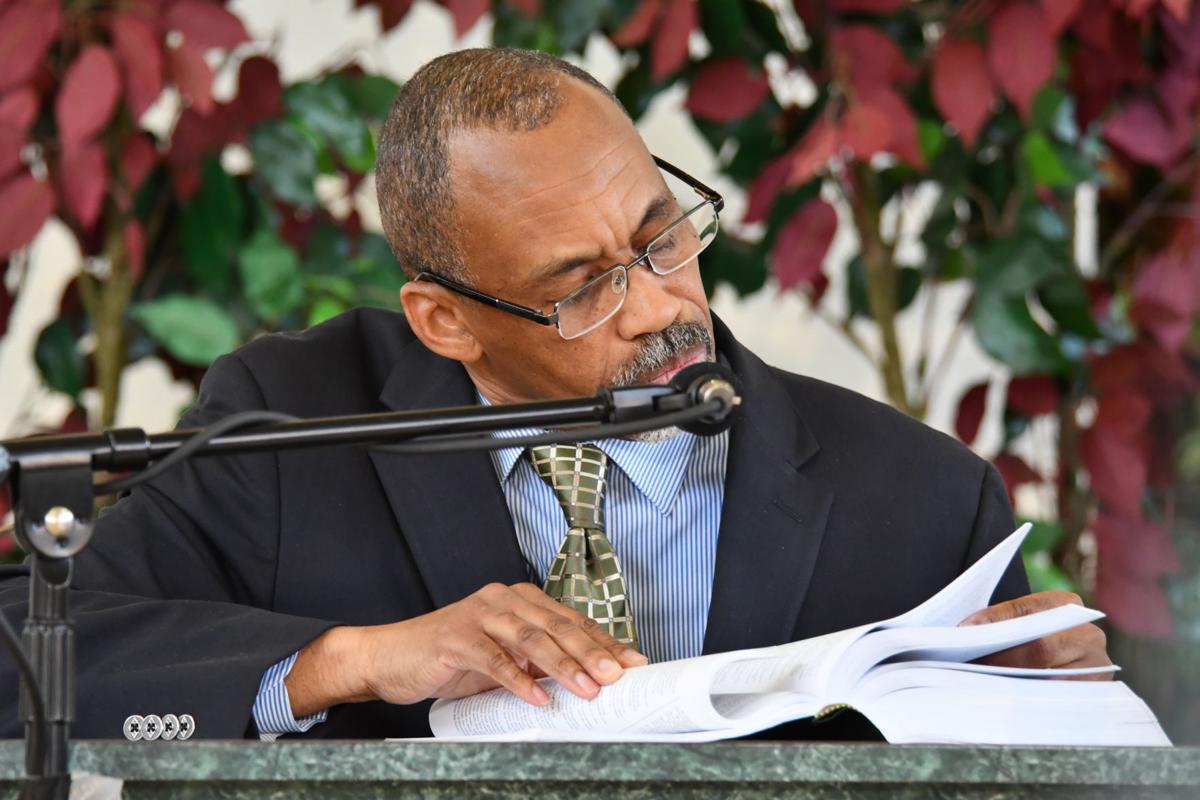 Brother Steve Williams reads from the Holy Bible during service. 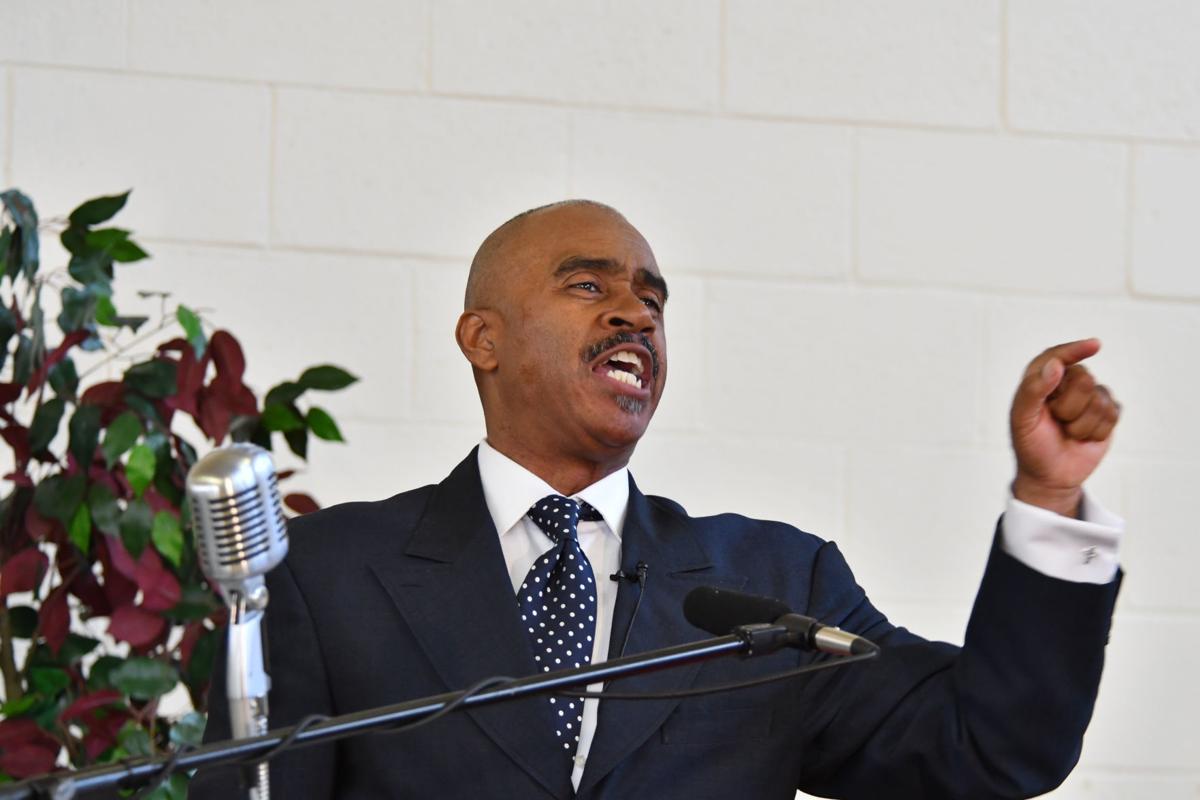 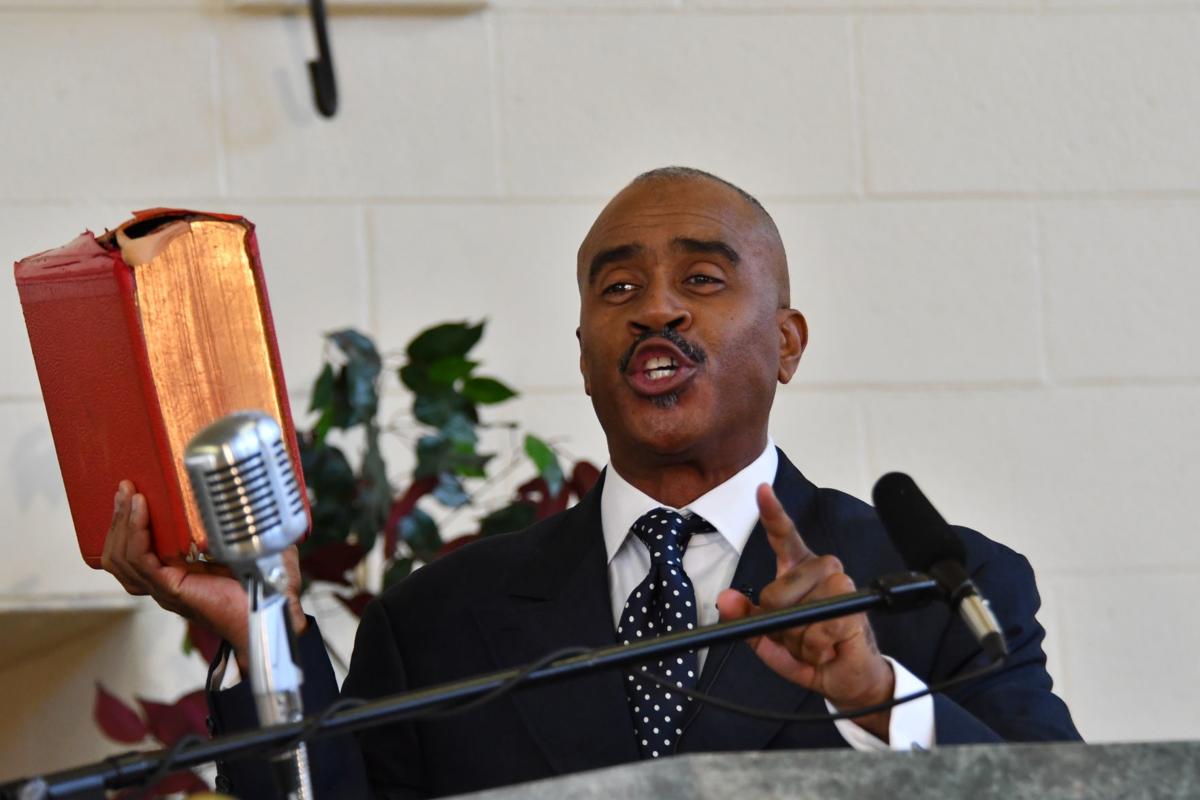 Pastor Jennings holds the Holy Bible while talking to the congregation.

Social distancing is practiced at First Church of the Lord Jesus Christ, Inc.

Brother Steve Williams reads from the Holy Bible during service.

Pastor Jennings holds the Holy Bible while talking to the congregation.

Despite controversial views, a crippling pandemic and civil unrest, First Church of the Lord Jesus Christ, Inc. continues to grow with a focus on the Bible and holiness.

Founded in the basement of his parents home in 1984,Pastor Gino Jennings said First Church of our Lord Jesus Christ has sustained itself by teaching people to live their lives according to Biblical principles.

“We believe firmly in what the scriptures say, we believe and respect the law as long as the law doesn’t contradict Biblical principles….A man should work to take care of his family, should respect God and be well mannered,” Jennings said. “We don’t feel the female should be abused in any form.

“We don’t allow brothers to function or hold office as ministers if [they] are unwilling to take care of [their] family or are abusive to [their] wife. We believe in very strict discipline in raising children. We believe a strong home structure should be taught and implemented [and] that should be well demonstrated in the church atmosphere.”

Members said Jennings’ stance has been key in the church’s success. But there has been some controversy for certain views, including those on homosexuality and women. One of the most noticeable incidents was in 2018 when Jennings came under fire for comparing women who wore makeup and certain clothing styles, to [whores] and prostitutes.

“Well, it isn’t because of what they were wearing.” Jennings said. “The Scripture describes a [woman] called Jezebel. Coming up, my mama told me to stay away from women that looked like Jezebel. It wasn’t only a look, it was a character. That’s not what makes a prostitute – it’s her actions,” said Jennings.

Speaking on homosexuality, Jennings said: “It’s written — God made the woman for the man. Society cannot event grow without a man and woman. The Scripture has always been against it. Homosexuals visit the church… but I cannot endorse it. The only way I can change my view is if you get God to change what he said in the Scriptures.”

Cyndi Rawlings, a member for 21 years, shared her view on the comments made about women.

“If you don’t know a thing, it’s going to offend you. In the scriptures, we are taught that a woman should dress in modest apparel,” Rawlings said.“People think, ‘If I come to church, I can come in any way but when you are taught the proper way to dress as a woman — some kick against it, some find it difficult to change but it’s up to the individual.

“He was giving them an example of what they looked like and because he is so [straightforward], he speaks the language they understand. That’s what makes them upset. The word hoe, that’s the typical word nowadays. If he would have said harlot, people would’ve said ‘what are you talking about?’ That’s what bothered them and they automatically said he said they were [whores] He said they looked like one.”

Rawlings said it was also hard for her to digest the teachings when she began attending First Church. However, she and her husband ultimately chose to be baptized and worship there because of its instruction on how people should live.

“We thought it was the best thing since sliced bread,” she said. “It was relevant to our experience. [Initially], it was rough because it was totally opposite of what we were used to, which was [doing] what you wanted as long as you showed up at church on Sunday.

“The new way we learned is that God’s way to salvation is through holiness. We never heard of holiness, all we heard was Baptist, Jehovah Witness, Apostolic — all churches we attended, none of them were in the scriptures. That was tough because as we learned the way of holiness, it was totally opposite of how we call ourselves. It was just totally different — the way you dress, the way you talk, the way you pray, how important it was to be baptized, how you have to repent first. I never knew I had to repent before I got baptized.”

Ron Skotleski, a member for more than 20 years and First Church’s media producer, stated a similar view. He began his experience there as a TV producer.

“I was doing his programming and I grew with him,” Skotleski said. “I listened to his message. It all made so much sense, I said I’m not going to be Catholic [anymore]. Then, I got baptized. What [Jennings] says is logical. His message is very powerful. It’s all from the Bible, Pastor Jennings strictly follows the Bible.”

Skotleski added that this is the reason First Church has realized the growth it has, with satellite locations in 19 states and 13 countries, and an increased demand for their media.

“For over the 22 years I’ve been doing production, the church has grown,” he said. “We were doing one video a week.Now, I send out 50 in one week to different TV stations. They go onto local TV channels. We send it to Africa, Malawi, Jamaica, the Cayman Islands. It’s all over the world now.”

As for online content, Skotleski said they’ve seen an audience increase since the start of the pandemic. The last Sunday they webcasted before churches shut down drew “790” viewers. Now, they are “averaging 8,000” between two Sunday services.

“It just went bananas, the next week …when everybody started shutting down because of coronavirus.,” he said. “They needed a preacher and found him. This church has grown because people need the truth.”

First Church has been open during the pandemic, but with specific guidelines. Only a certain number of members are allowed in the sanctuary. They have to wear masks and gloves, and overflows might be sent to a room to watch the service.

Rawlings said the fellowship is missed but that “salvation” can still happen even if one is not inside the church.

“Just because we can’t go into the building that doesn’t mean you lose your salvation,” she said. It does feel good to be in the church with brothers and sisters praising [but] you can sing to the Lord in your house.”

While they are not in the sanctuary, Rawlings stressed that they are still working “constantly” in the office.

“Because of the size of the church, we have so many different departments, we have so many things constantly going on,” she said. “We have brothers and sisters answering phones and questions.

“We have so many calls coming in a day- people want to get baptized. We all know there’s a purpose behind the job we are given to help the ministry roll smoothly. We have to work together.”

‘Church is the people’: Philly’s Catholic faithful return, saying they need Mass more than ever

Jennifer Ballard, like many other members of St. Martin de Porres Catholic Church in North Philadelphia, likes to say, “church is the people,”…