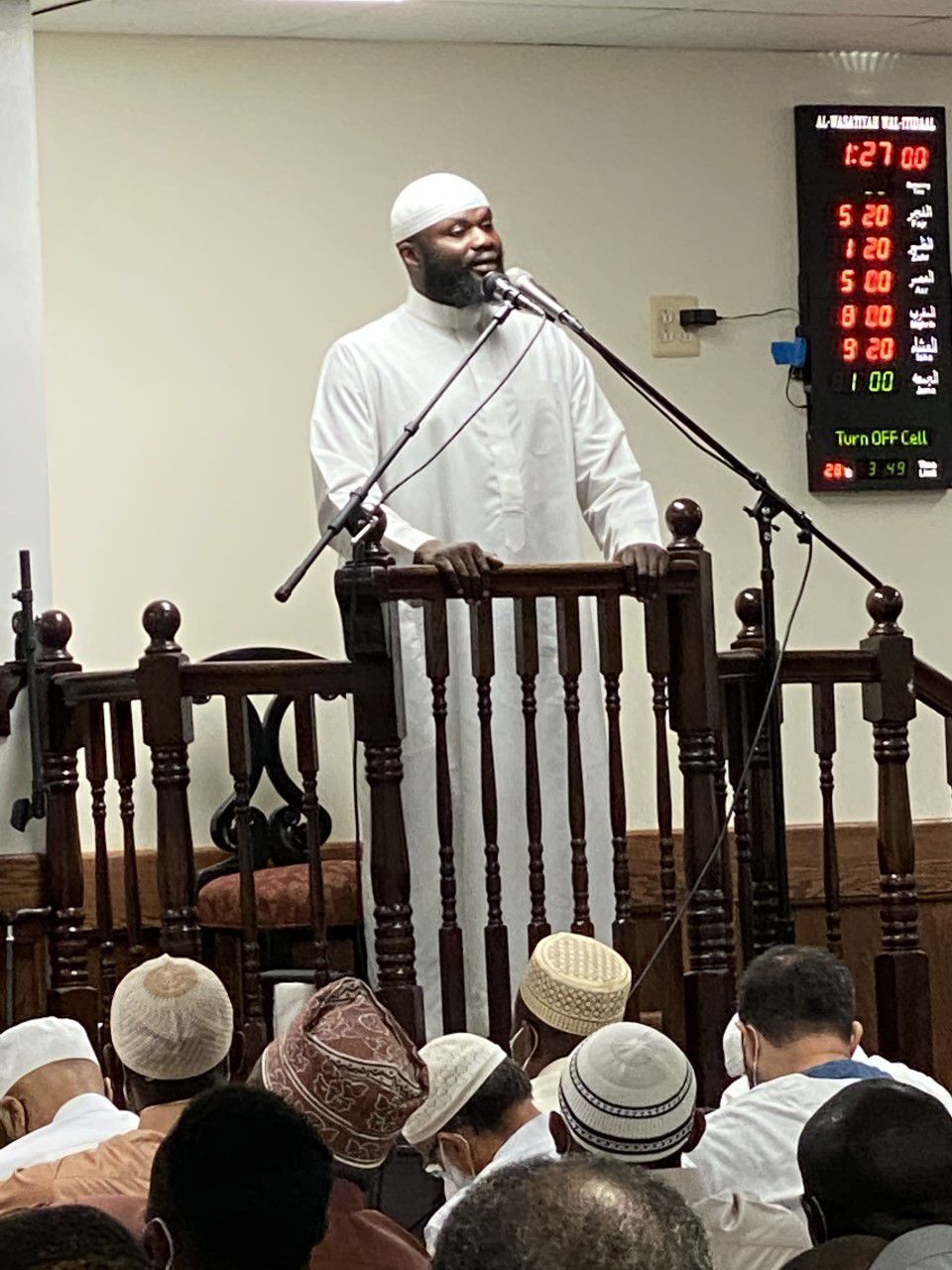 Imam Nuhu Abdullah, a graduate of Al Azhar University in Cairo, Egypt, delivers the sermon the importance the month of Muharram which is the start of a new year and how Muslims should start the new year committing to be better Muslims through fasting and prayer. — TRIBUNE PHOTOS/ABDUL R. SULAYMAN 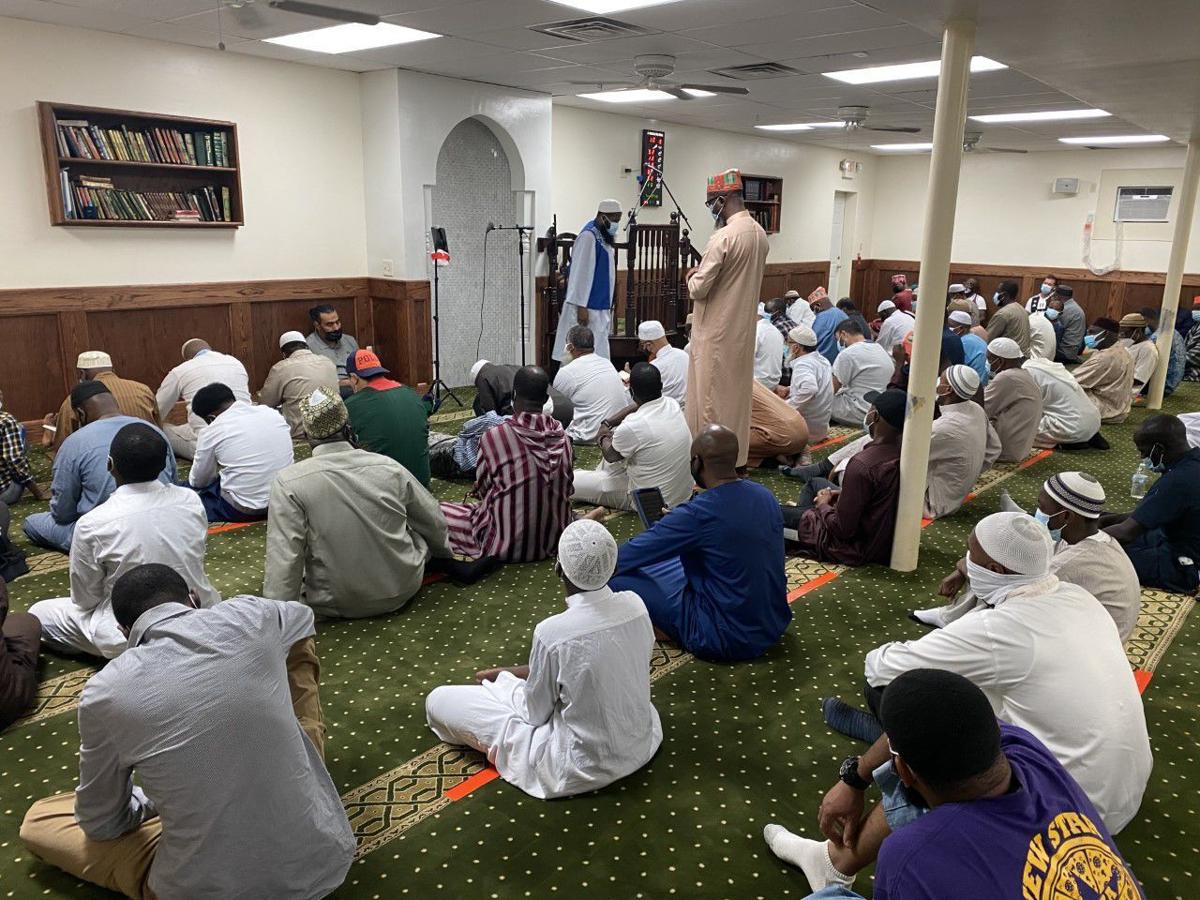 Members of the community make obligatory prayer before Jumah is formally started. 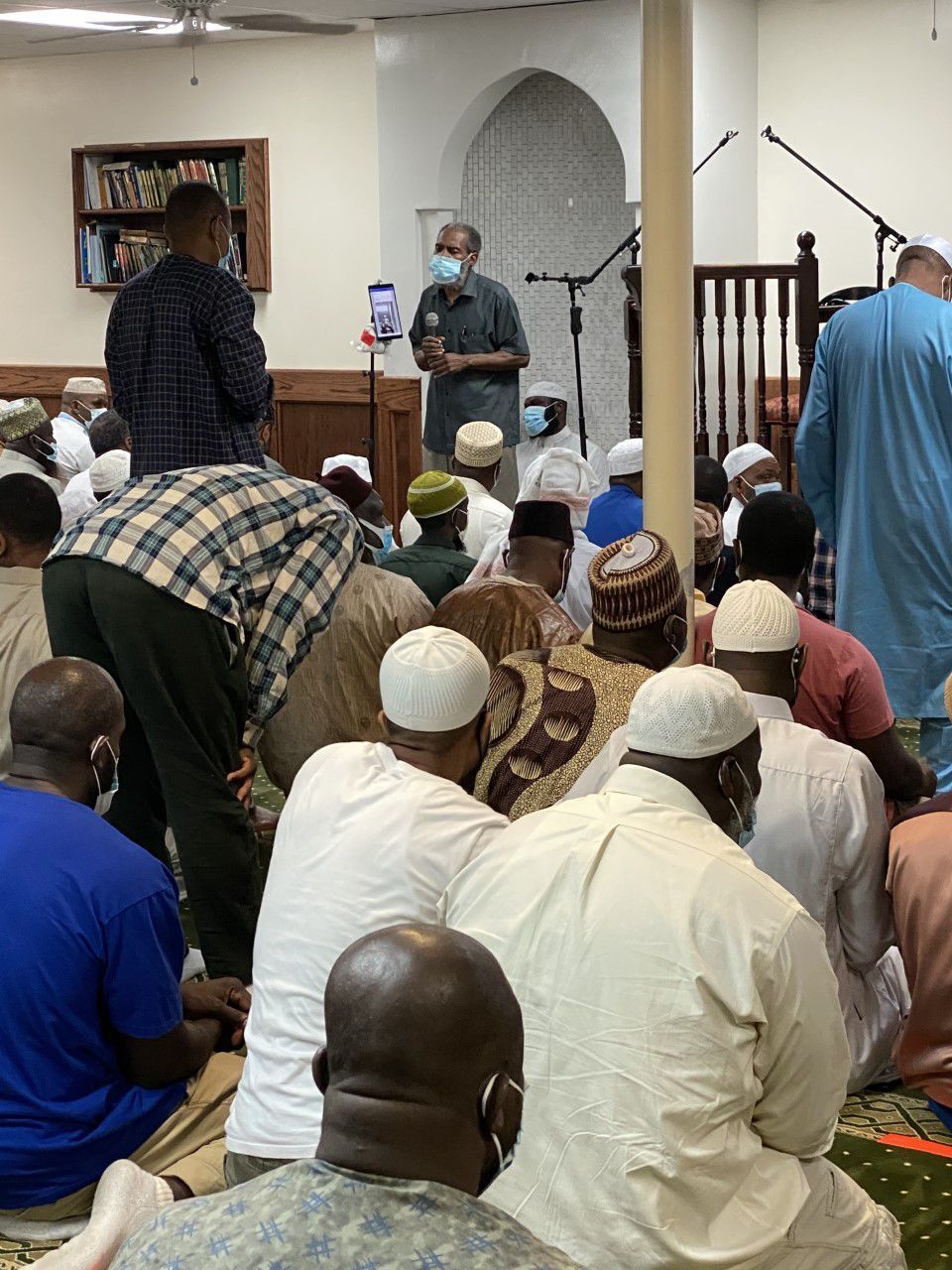 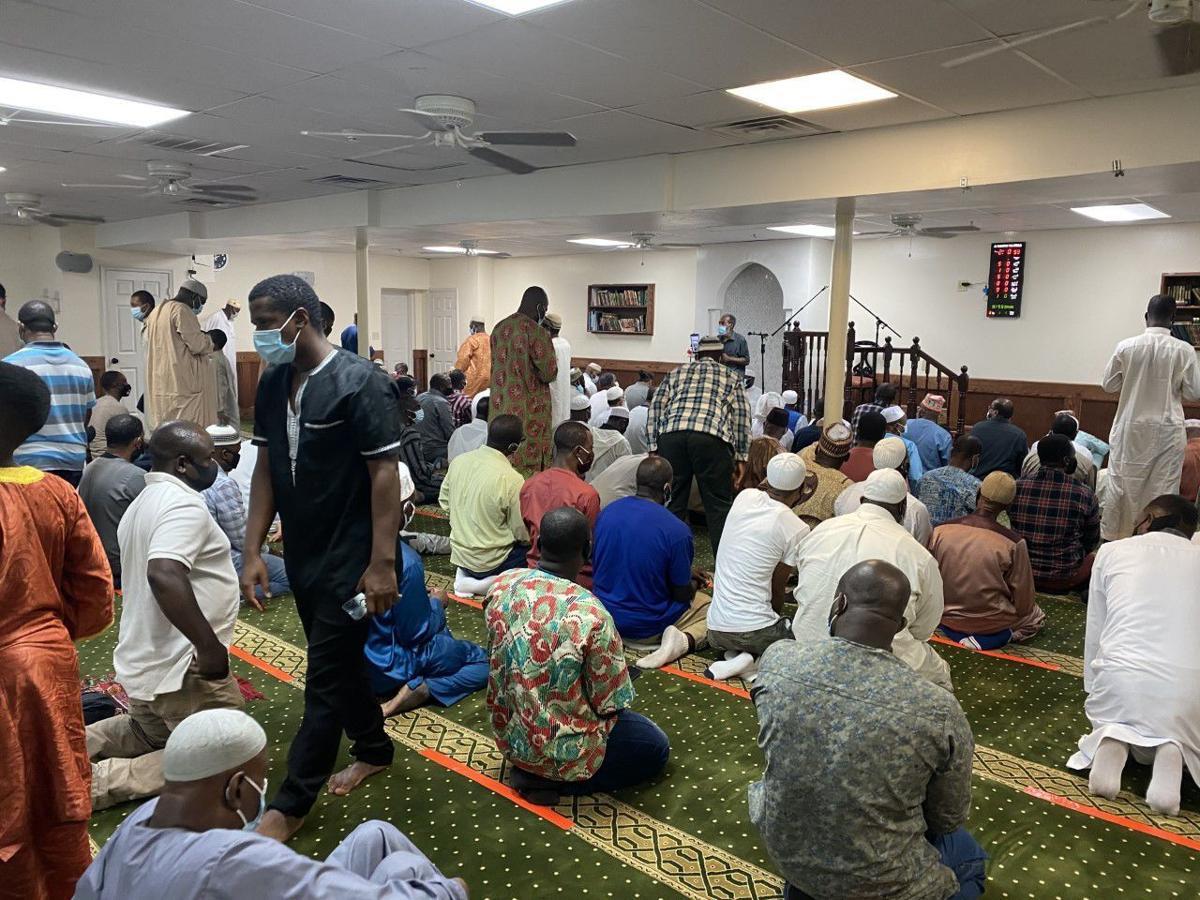 After the Jumah sermon and prayer are concluded members may leave or stay for personal prayers. 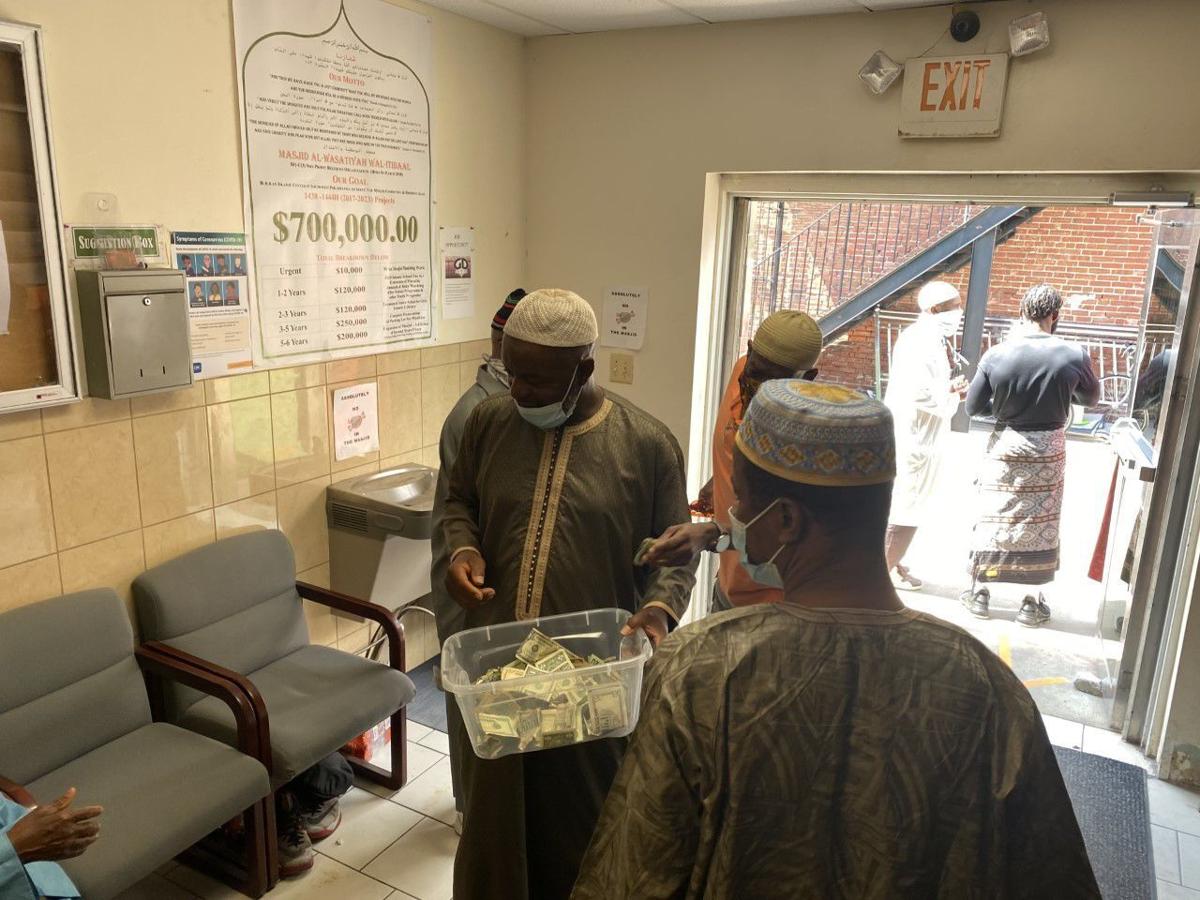 Collection is taken for maintenance and other outreach programs the masjid members may under take. 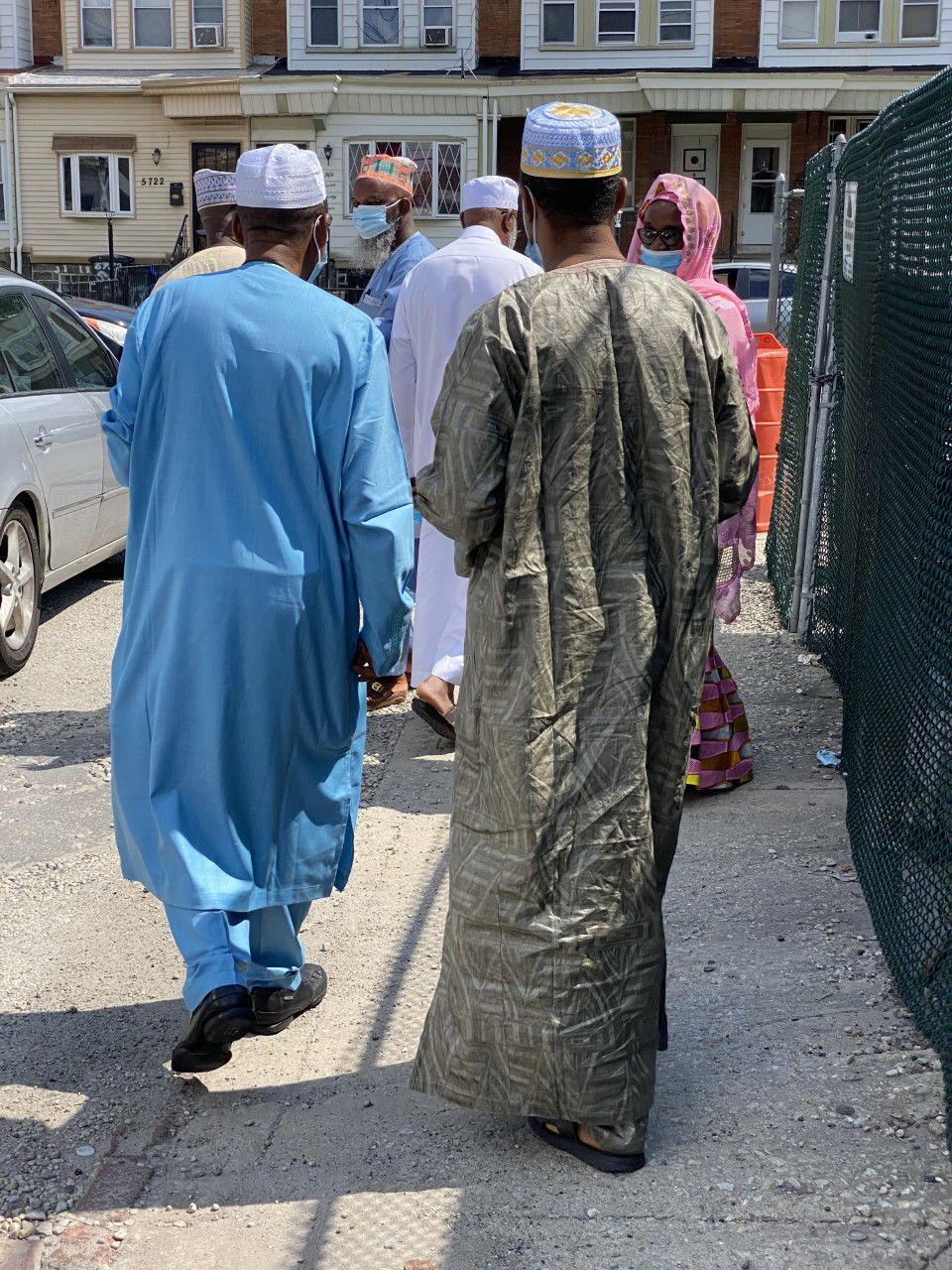 Members of the community many of whom are from West African countries leave Jumah services.

Imam Nuhu Abdullah, a graduate of Al Azhar University in Cairo, Egypt, delivers the sermon the importance the month of Muharram which is the start of a new year and how Muslims should start the new year committing to be better Muslims through fasting and prayer. — TRIBUNE PHOTOS/ABDUL R. SULAYMAN

Members of the community make obligatory prayer before Jumah is formally started.

After the Jumah sermon and prayer are concluded members may leave or stay for personal prayers.

Collection is taken for maintenance and other outreach programs the masjid members may under take.

Members of the community many of whom are from West African countries leave Jumah services.

Through a marriage of classic Islamic teachings and cooperative economics, Masjid Al-Wasatiyah Wal-Itidaal is reclaiming and rebuilding a Southwest Philadelphia block that was once a haven for drugs, violence and all the evils in between.

Since their opening in 2010, Wasatiyah has acquired and developed several properties, created a space for prayer, organized a community center, a weekend school, and has begun planning for a full school.

“Dating back to 2010, the community members, the families in the community — we saw there was a need to have not just a place of worship…[but] we needed to have a place that would serve as a community center for all of us, particularly our children,” said Sani Alhassan, Vice President of the Board of Directors.

“We were concerned about the influence and everything else, making sure the fabric of our community is not torn apart by the confusion within some of the immigrant kids where they are not sure what to follow.”

Wasatiyah is diverse, with believers hailing from Sudan, Mali, Liberia, Morocco, Uzbekistan, Jamaica, Bangladesh and Burkina Faso, among other countries, but they work as one for the growth of the masjid. Because of this focus on community, it has established itself as a place where Muslims from all walks of life can come for daily prayer, Islamic classes, family counseling and family seminars.

Youth, ages five and up, have their own weekend school, at which they are taught how to handle life issues. And a recently introduced mentoring program will connect them with masjid members who can provide guidance in life and career skills.

For the community, Wasatiyah offers the Zakat food distribution, which, since 2011, has given out 25 to 40 tons of food; an after school program; and family events during the two Eids.

Alhassan said this holistic approach to organizing the masjid was set in the vision by the founding Imam, Okash Kameny, who foresaw it as an all-encompassing house of prayer.

“He laid down a good vision. A creation of vision was so necessary because we didn’t have [anything]. There was no building, no money, nothing. So he said he looked forward to when we [would] have a space that [would] be open to everyone, so that everyone [would] be made to feel at home,” Alhassan said. “So, he laid down this vision and he said we will expand and continue to teach the kids, bring the kids from the community, have an after-school program. I [thought] it was a joke because it was really nothing.”

Wasatiyah administrators said the properties they bought were a cluster of blight before they moved in them.

The property they worship in now once housed an abandoned home and neglected auto shops. An adjacent building was a former nightclub where “drug dealing, prostitution, casual sexual activities and a murder” took place. A nearby lot was a dumpsite that held waist high trash.

“I always remind the community to think about where we were before and where we have arrived to today. It’s just progress, day in and day out, from coming from this small, tiny building to this building, then to purchase the nightclub which used to be a place of all kinds of horrific stuff, and cleaning the parking lot,” Imam Nuhu Abdulai said.

“We raised money to bring it to this level. The next plan we [have] is a full-time school where we blend the secular education and Islamic education.”

Abdulai and other Wasatiyah administrators agreed they’ve reached this point by collective effort, noting that since their establishing, they have not taken any loans to finance the development.

Alhassan said because members hold a range of professions – from entrepreneurs to engineers, they are able to offer their hard skills or financial support to continue developing the masjid.

“That’s how we came from ground zero and we still keep going up. We have electricians, we have masons, so the community can do whatever. It’s amazing. We don’t necessarily have all the money. But part of it is taken care of by different people. We don’t do loans.”

Imam Aqil Abdus Sabur shared a similar view, stating that they do not believe in “interest” and that the unity Wasatiyah has benefitted from is a result of faithful believers and good leadership.

“If the religious leadership is feeding the soul of the people, the people are going to be supportive. They’re getting the knowledge of Islam from the pure sources, from the respected scholars, from Islamic tradition. When people know that they come in and that’s what they are going to get, they have no problem whatsoever contributing to more of that,” Sabur said.

“There are people who are committed to paying the light bill. There are people committed to the various expenses of the masjid, they commit to doing that because we don’t believe in interest. This is all of the regular, rank and file Muslims who’ve contributed to this development. Everybody talks about self-help and that’s what it’s about.”

Sabur added that the divine reward associated with giving to the masjid is also a driver. “We are looking beyond the benefit here,” he said. “We also have our eyes on the hereafter. We have to do whatever we can now in order to try to secure that space in the hereafter.”

Bilqees Larry, a Wasatiyah member for three years, immediately began teaching at the youth weekend school when she joined. A native of Ghana, Larry is studying for a graduate degree in health administration and said she felt compelled to share her knowledge.

“As a teenager growing up, we face a lot so we teach them the moral duty, what the Quran and the Hadith say [about] your day to day life. When they come in, they learn what God says you should do if you are in trouble, [that] this is how you are going to solve it,’” Larry said.

“Some of the youth have a lot they face at home, they feel comfortable coming, telling their story but we just help them. The most important thing is for them to know their religious duty, being responsible, helping at home, helping the community and the nation at large.”

This notion of continuing the work, so that the community prospers is what Alhassan said is central to Wasatiyah’s mission and its existence.

“The most exciting part of it is, in addition to us being able to fulfill our religious obligation, we have our children witnessing the efforts we are putting in. They see the off times in the evenings, on weekends, the time that we put in to follow up with other kids in the community,” he said.

“…The idea is that the senior students who are now in grad school or have started careers also see the need to follow suit so that very soon, some of us will take a back seat and they will now be the head. But they are going to be more qualified because they are getting a better education and hopefully, eventually, we can transform this entire community.”

Legislators continued their push for the passage of two bills that would ban hair discrimination in the commonwealth, in a virtual press confe…