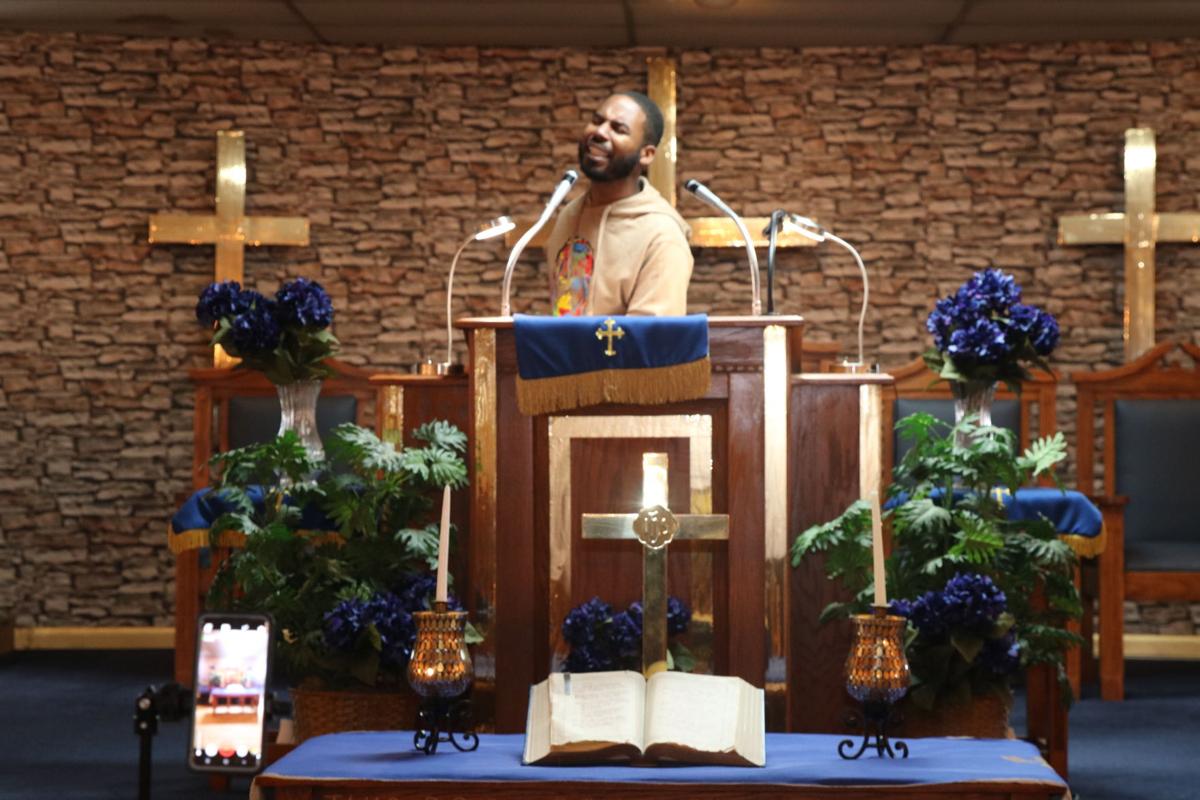 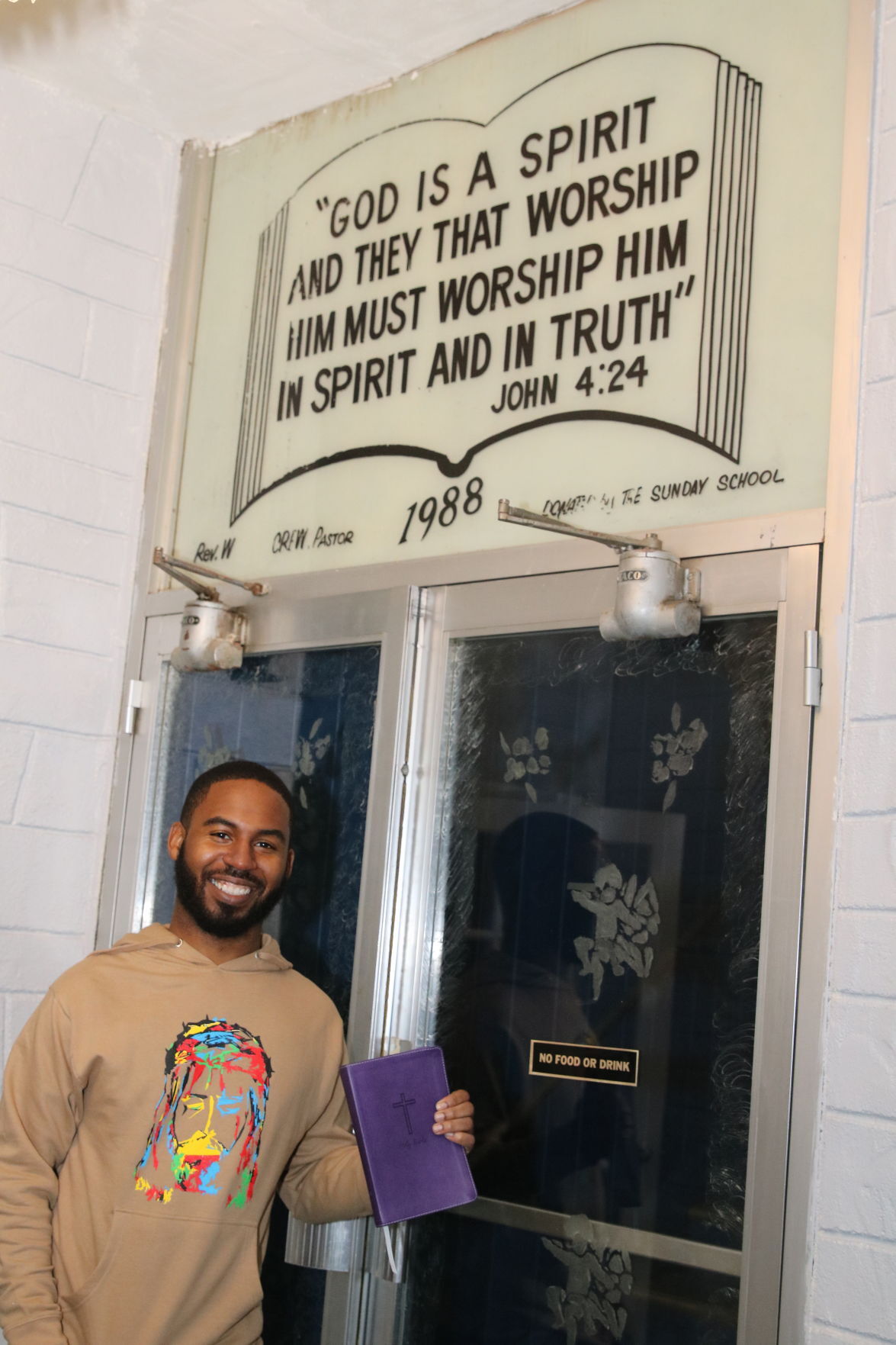 Minister Kevin Hartman stands in the foyer with a welcome shared message. 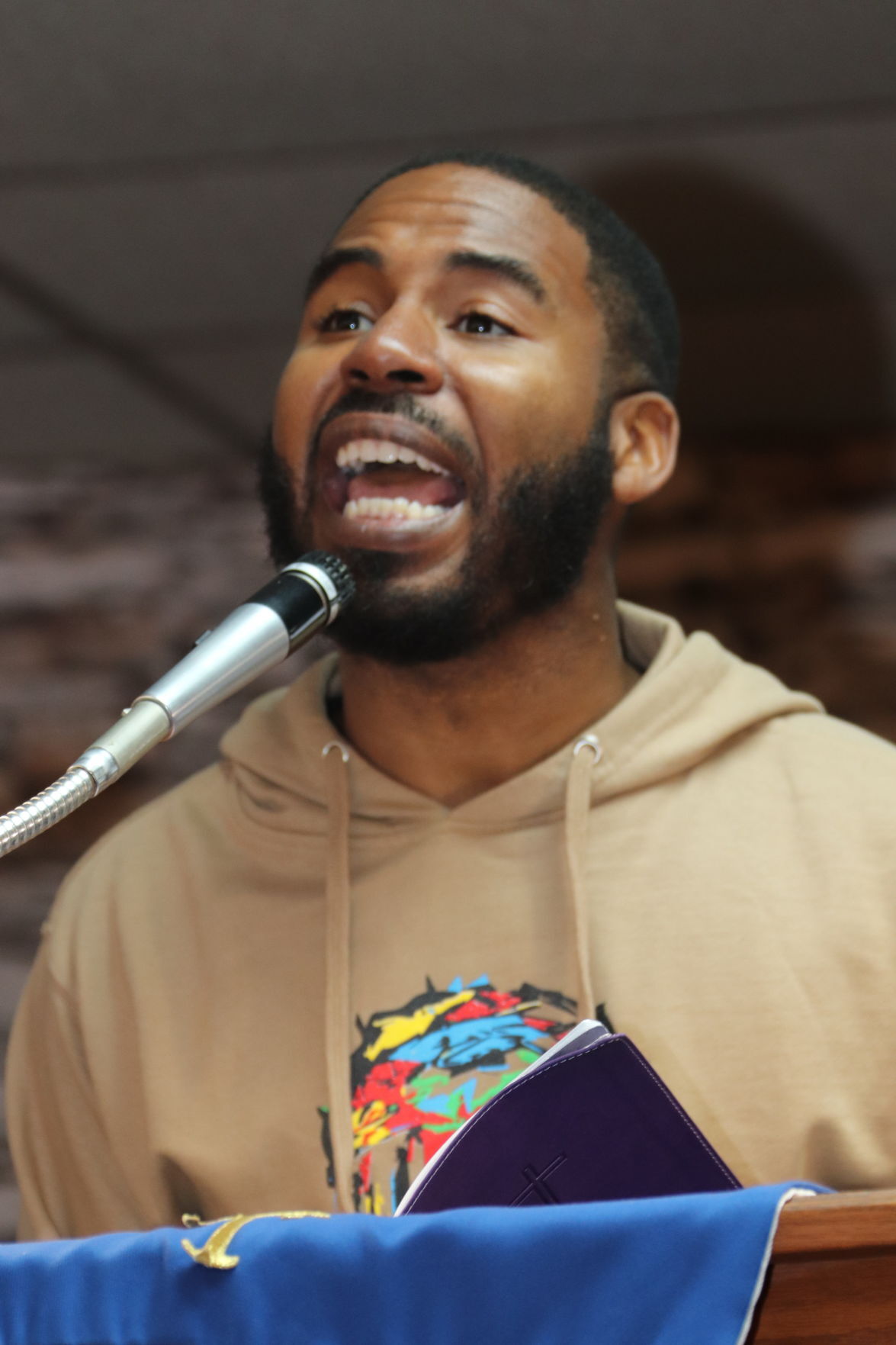 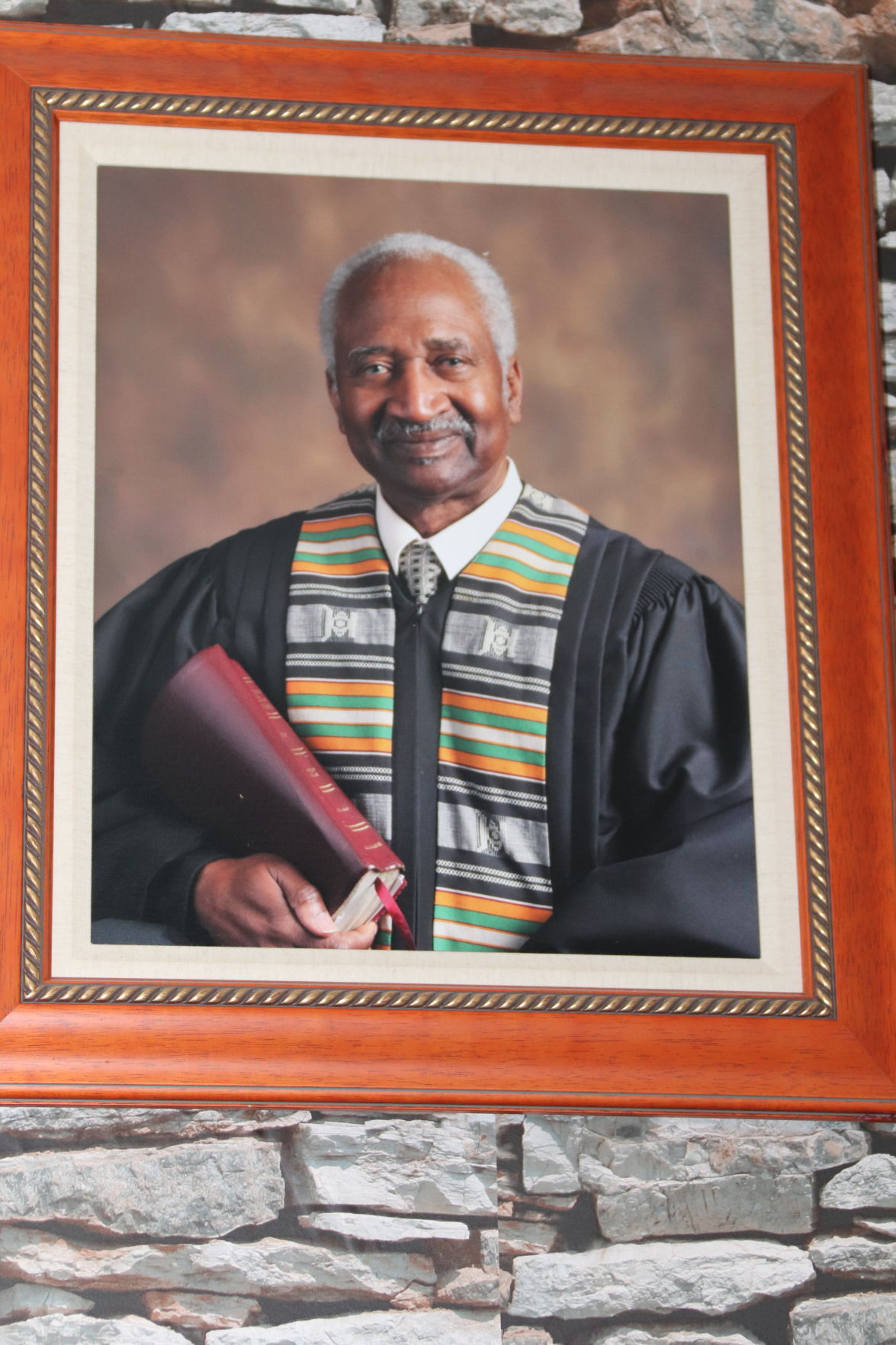 Minister Kevin Hartman is filling in for his grandfather, the Rev. Wilbert Crew. 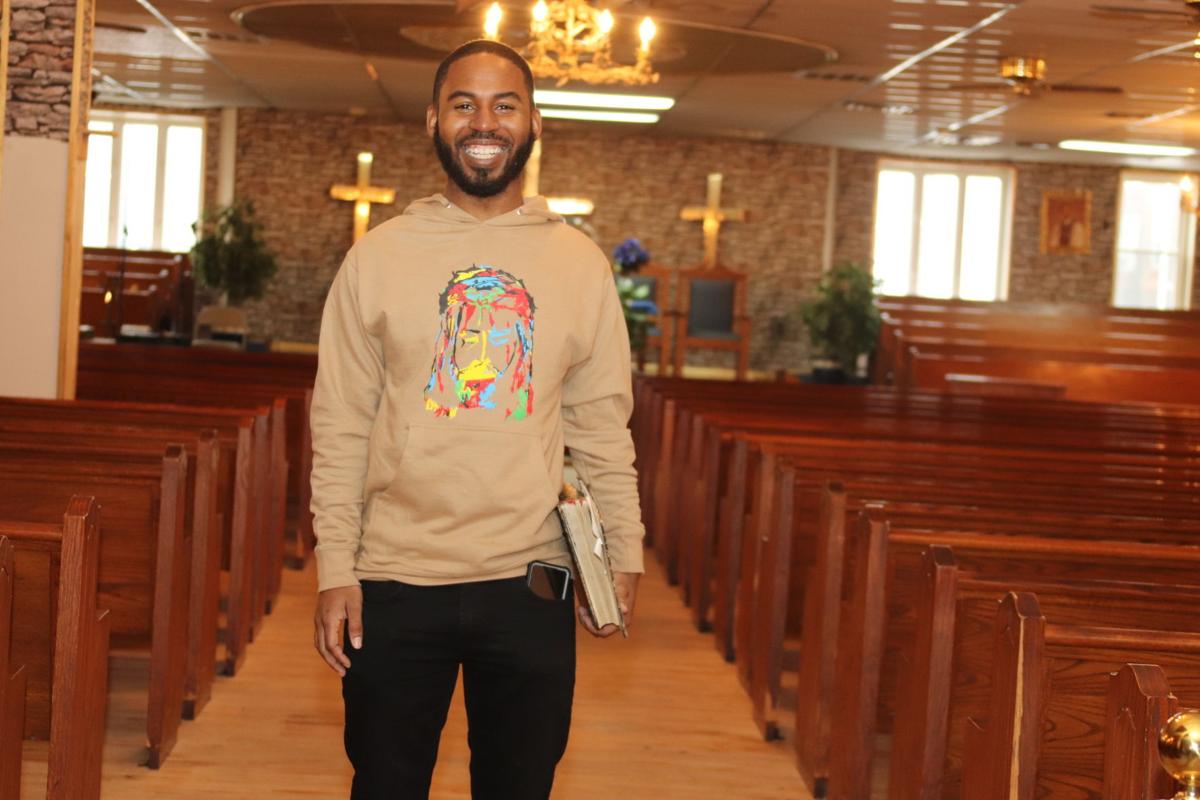 Minister Kevin Hartman stands in the foyer with a welcome shared message.

Minister Kevin Hartman is filling in for his grandfather, the Rev. Wilbert Crew.

The Lovely Baptist Church has been thriving and ministering to the people of Philadelphia for over 103 years.

Minister Kevin Hartman is serving as the interim minister, following in the footsteps of his grandfather, the Rev. Wilbert Crew, and moving the congregation forward using technology.

“I’ve been preaching since 2013 and serving alongside my grandfather as an associate for the last years,” said Hartman, the pastor at the Lovely Baptist Church. “This summer I became the main teacher and preacher since the pandemic.

“We went virtual through Facebook Live first. So we created a Facebook page and every Thursday at 7 p.m. we have Bible study and every Sunday at 11:30 a.m. we have our virtual worship experience.”

Under Hartman’s leadership, the congregation established a phone line for prayer calls as well.

“My grandfather was faced with health challenges so I stepped in,” Hartman said.

According to Hartman, at one point in his life, he had no interest in embarking on this path and would have never imagined stepping into his grandfather’s shoes.

After taking on the challenge and entering into a new phase of his journey, Hartman believes “this is an opportunity to move the church forward and a platform to do ministry at another level.”

“We stream often times from the church sometimes in the house or the office rather, but often times the church,” he said. “I will preach and teach. There’ll be some music and praying. It’s about an hour and fifteen minutes, so it’s really practical for an average online listener and it’s always available for replay and you can watch it live.”

Hartman said that moving the church online has not been an easy feat and that there were challenges but overall it has been a step in the right direction.

“There’s challenges, of course, because there are some older people who may not use the internet and you have to kind of help them make that transition,” he said. “Make sure, call or check or see if somebody even a neighborhood perhaps can get them connected. But for the most part, it’s been well. People have been engaged. It’s been good.”

You can see the engagement online during last Sunday’s service. With over 108 comments and six shares, people are really tuned in and expressing their joy and delight to take part in the experience.

“They understand that because of the pandemic there are restrictions involved and because it’s a public health crisis that it’s best that we do virtual [services],” Hartman said. “Honestly I believe that the virtual experience has actually shifted and enhanced the church. It really it has enhanced our minds and let us know that while church has left the building the work and the mission still goes on.

“Actually more so now than ever. It just looks different and sometimes because things look different doesn’t mean it’s less or more but nevertheless, it’s different but it seems like they’re taking it ok.”

When asked what has kept the church strong throughout the years, Hartman’s answer is a strong, great biblical foundation.

“That’s number one and is a huge thing for us,” he said. “People who are willing to serve.

“There is definitely a collective effort. I think also the thing that cannot be taken for granted is the people that decide to share and comment and like our post which helps spread the word. That’s something that even if they aren’t doing anything physically [outside of the home] that is huge within itself, that’s engagement.”

“They are not just walking past the video. So it’s a process that’s a collective effort,” Hartman said.

The engagement has even increased from people that have never been exposed to the church.

Although things are very different now and may continue to change as the world adapts to moving forward during the pandemic, Hartman reminds his congregation that there is light at the end of the tunnel.

“The light at the end of the tunnel is that thought it may be a new normal and though things will never be the same, God specializes in creating new,” he said.

“Just like he created the earth from the beginning brand new is the same way he can continue to do things in our lives brand new. Whether it be new businesses, inventions, new strategy new visions, understanding that he can still do great things even in the newness. Diifferent doesn’t mean that it is all going to crumble. This is the chance to reimagine and reset.”