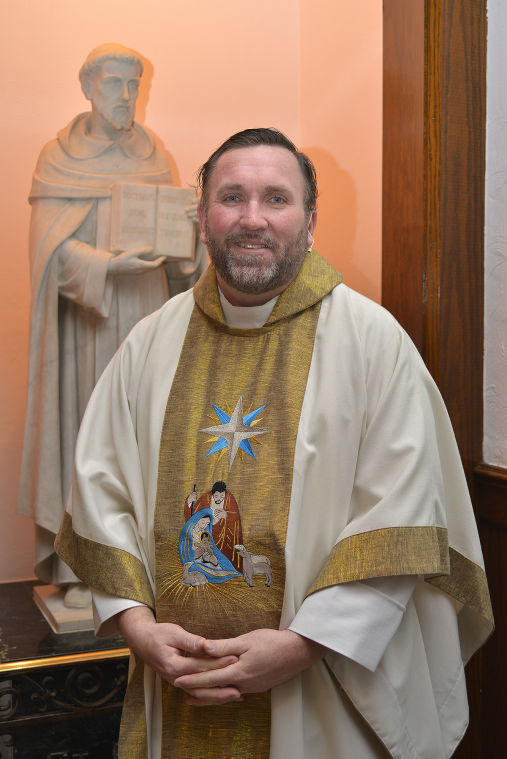 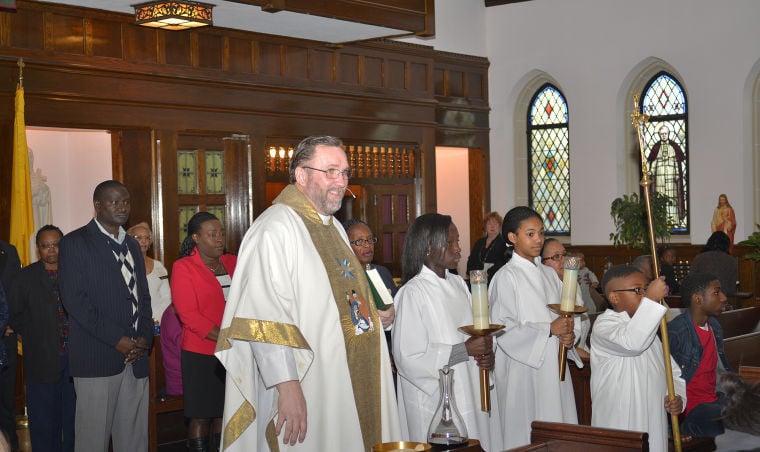 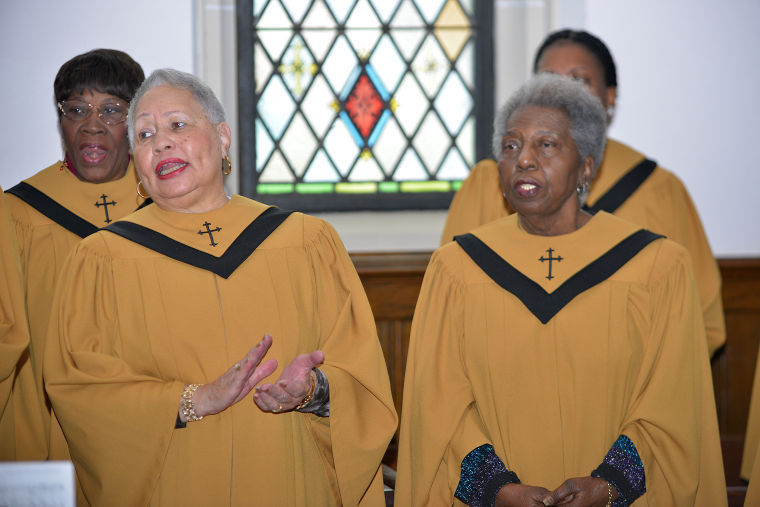 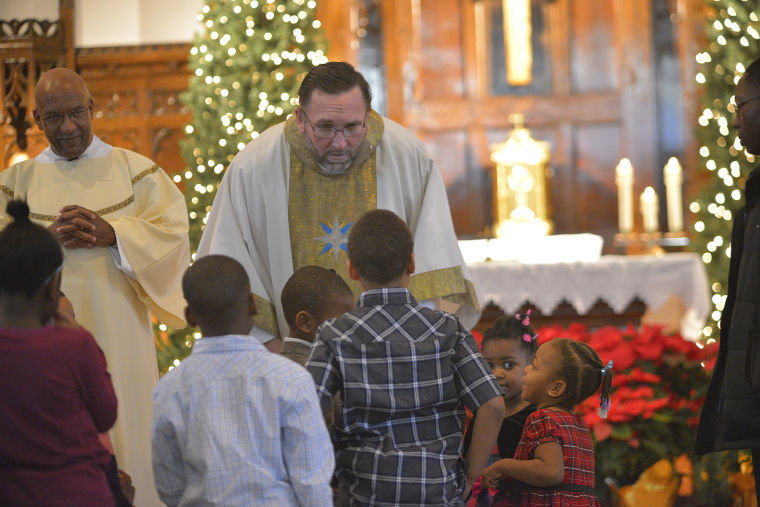 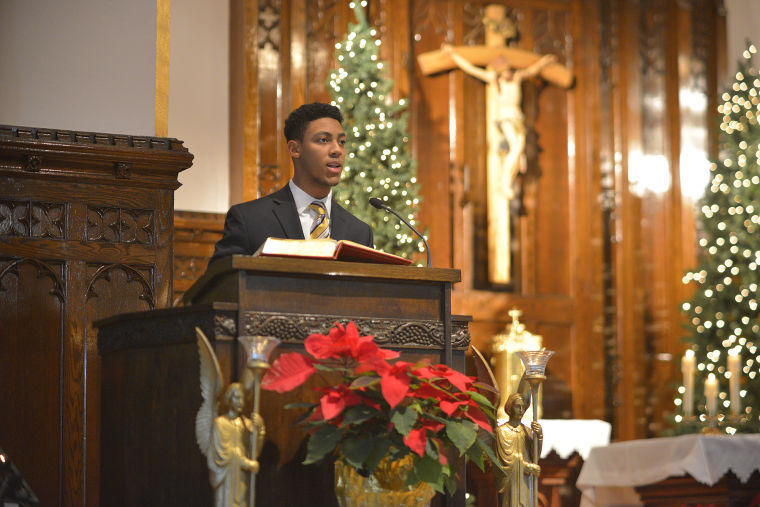 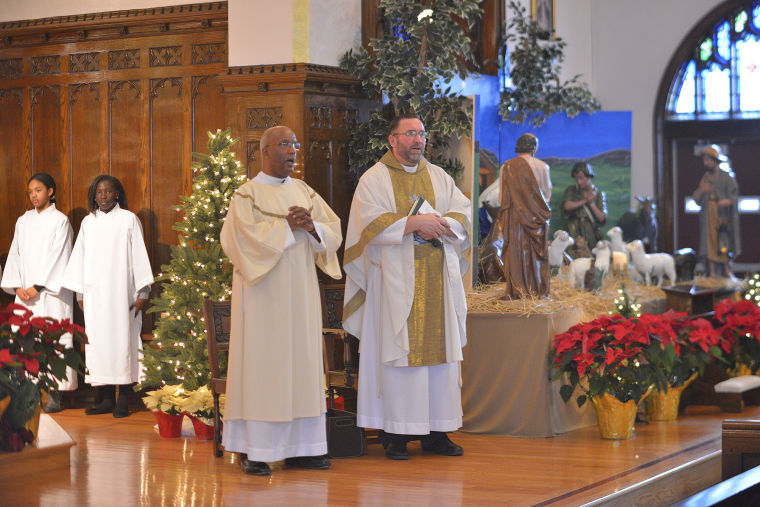 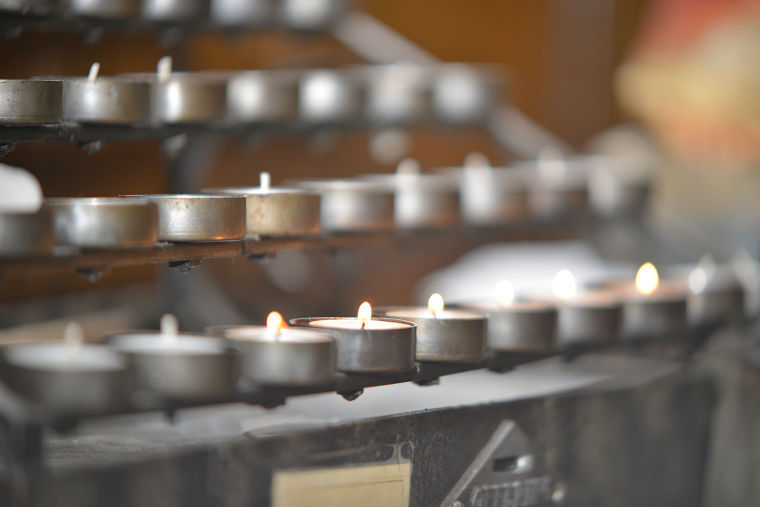 St. Raymond of Penafort Catholic Church is always full, not just during holiday and vacation seasons. With more than 1,600 members, including 523 families, church attendance remains consistent throughout the year. Couple this with three choirs and an independent mission school thereare both youthful and more seasoned members who contribute to this church’s spirit.

Located at the corner of Vernon Road and Williams Avenue in the heart of Mount Airy’s Cedarbrook section, the church chimes and the corner marquee ring out that it is a thriving neighborhood house of worship. The members are generous; during 2014 parishioners contributed more than a half-million dollars, according to the parish census, and there were numerous outreach ministries that bring even non-Catholics in their doors.

This welcoming spirit was evident on the Sunday between Christmas. The Rev. Christopher M. Walsh, the pastor, and Deacon William H. Bradley, who also serves as the director of the Philadelphia Archdiocese’s Office for Black Catholics, stood in the sanctuary. There was a sea of generations of families and individuals filling the pews and even a few in the former choir loft above. This is typical for St. Raymond’s.

“I think what brings people to St. Raymond’s is that we have the best of Catholicism and the best of the African-American worship experience,” Walsh said. “We blend them together well. I would encourage people to come by and try us out. Oftentimes, it’s not what people would expect from a Catholic church. You would have to come in to experience it.”

Currently St. Raymond’s is gearing up for the papal visit to the city for the World Meeting of Families in September. All of the church ministries will focus on issues facing members of individual families. Members of St. Raymond’s are being encouraged to open their homes for the throngs of Catholics from around the world who will be converging on the city next fall.

Like all Catholic churches, St. Raymond’s parish has official boundaries . They estend from Washington Lane and Ashbourne Road in Wyncote south to Stenton Avenue to Ivy Hill Road in Mount Airy and then north to Cheltenham Avenue to Limekiln Pike and then north into Wyncote nd back to Washington Lane and Ashbourne. Some members live outside this perimeter but most live in Mount Airy, West Oak Lane, Cheltenham, Chestnut Hill, Wyncote or Elkins Park. Two-thirds of their members do reside within the parish boundaries.

Walsh said there is still more mission work to be done in the Cedarbrook section as well as the adjacent West Oak Lane and Wyncote communities.

“This year we will be recommitting to neighborhood outreach,” he said. “About a third of our members come from outside our neighborhood. While we do welcome them, we do realize that means there are lots of folks in this neighborhood to be reached. So that will be our focus in the coming year.”

The St. Raymond calendar is already full of activities for current and future members. The “Our Mission is Love: Saving Youth From Violence” forum thatwill be held on Sunday, Feb. 15 at 2 p.m. It will be in the form of an interactive town hall meeting.

“It will present honest discussion about racial tension, policing policies, and the needs of young people,” Walsh said. “It will certainly be a response to what happened in Ferguson and New York. We are working with folks from the city and community activists, because this is an important issue facing our community.”

Then the church will be making a local pilgrimage to the Shrine of the Miraculous Medal, 500 E. Chelten Ave. in Germantown, during Pentecost weekend, May 22-23. Author and Rwandan genocide survivor Immaculee Ilibagiza will be the guest speaker on the topic of forgiveness. “Our church will play an important role, so we are getting ready for that event,” Walsh said.

Walsh’s emphasis on social justice and community outreach comes directly from his call to the ministry. It was as a recent Temple University alumnus in the early 1990s that he received a “tugging at my heart” to become a priest. At the time he was working with emotionally disturbed children.

So his call was to help those who needed healing. He heeded the call and enrolled in St. Charles Borromeo Seminary, which led him to eventually be appointed St. Raymond’s pastor in 2008 upon the retirement of the longtime pastor, Monsignor John O’Brien.

Walsh brings to St. Raymond’s a global perspective in an age when Christianity is growing in the Southern Hemisphere. In October he will join members on a mission trip to Uganda. An information session about the mission was scheduled in the church’s rectory on Monday, Jan. 5.

St. Raymond’s has many ministries. Besides the ushers’ board, there are men’s and women’s groups. The Aid for Friends provides cooked meals for shut-ins and the elderly. There are also a parish pastoral council and parish finance council.

Arleen Daniel coordinates the religious education program for the children while Bill and Cindy Bradley provide instruction for the Rite of Christian Initiation for adults wishing to join the church or learn more about the faith. Bill Bradley also coordinates the ushers and greeters, while office manager Michelle Downing heads the Parish Life Committee.

The church also has partnerships with other churches. In the past decade it has done programs with Enon Tabernacle Baptist Church to raise monies for youths, hosted a revival with nationally known Deacon Harold Sivers that drew in those from other parishes, and more recently, partnered with Bethel Deliverance Church in nearby Wyncote to host 300 guests for their Holiday of Hope at Christmas.

Juanita Berry has been a member of St. Raymond’s for the past decade since relocating back to Mount Airy after living in Washington, D.C. for 38 years. She was drawn back by pastor emeritus Monsignor O’Brien, but remains because of the energy of Walsh. She is an extraordinary minister of Holy Communion, participates in Bible study and volunteers in the office two days a week.

“I think Father Chris is excellent because he brings you closer to the Lord, especially in his homilies,” Berry said. “It’s important to have homilies and ministries that speak to you as the parishioner. I’d tell anyone if they are looking for spiritual guidance, which is the case whenever anyone is searching, that that’s what you’ll get at St. Raymond’s.”

Tyrone Burkett has been a member of St. Raymond of Penafort since 1978. He is also an extraordinary minister of Holy Communion. In the past he has been a Mass reader, a member of the Parish Council, and an active volunteer with the old social committee drives.

“I love the diversity of people at St. Raymond’s,” Burkett said. “We have a population that cuts across different races, ethnic groups, social backgrounds, ages and experiences who all come together as one. The unison of the Catholic faith and beliefs are here, but we also socialize and fellowship with ease. We get along with each other. We are just an open and welcoming church.”