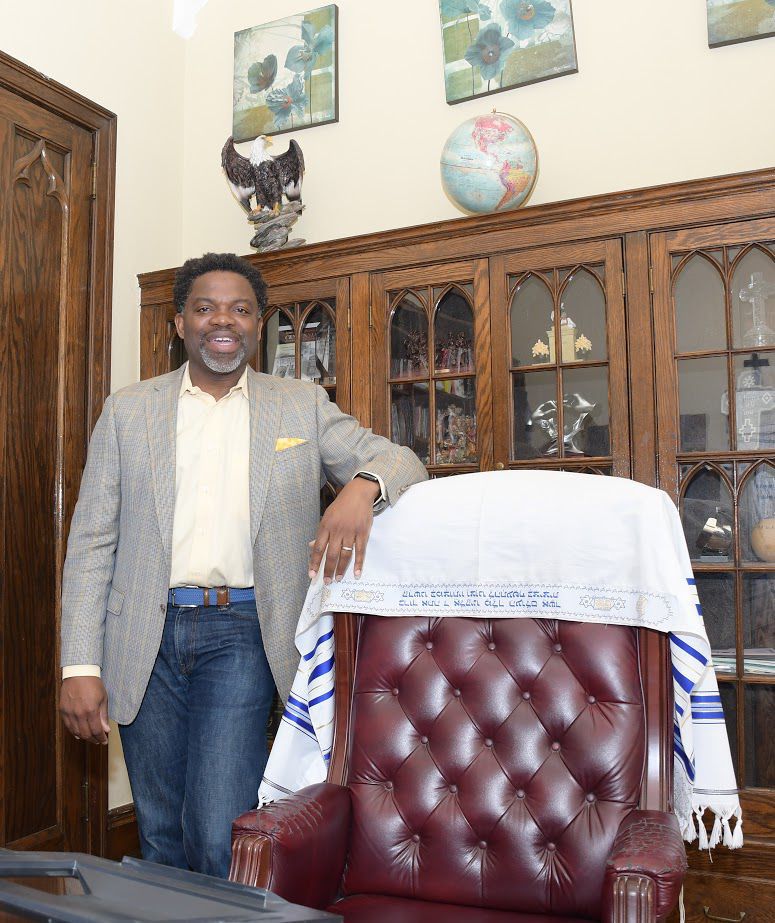 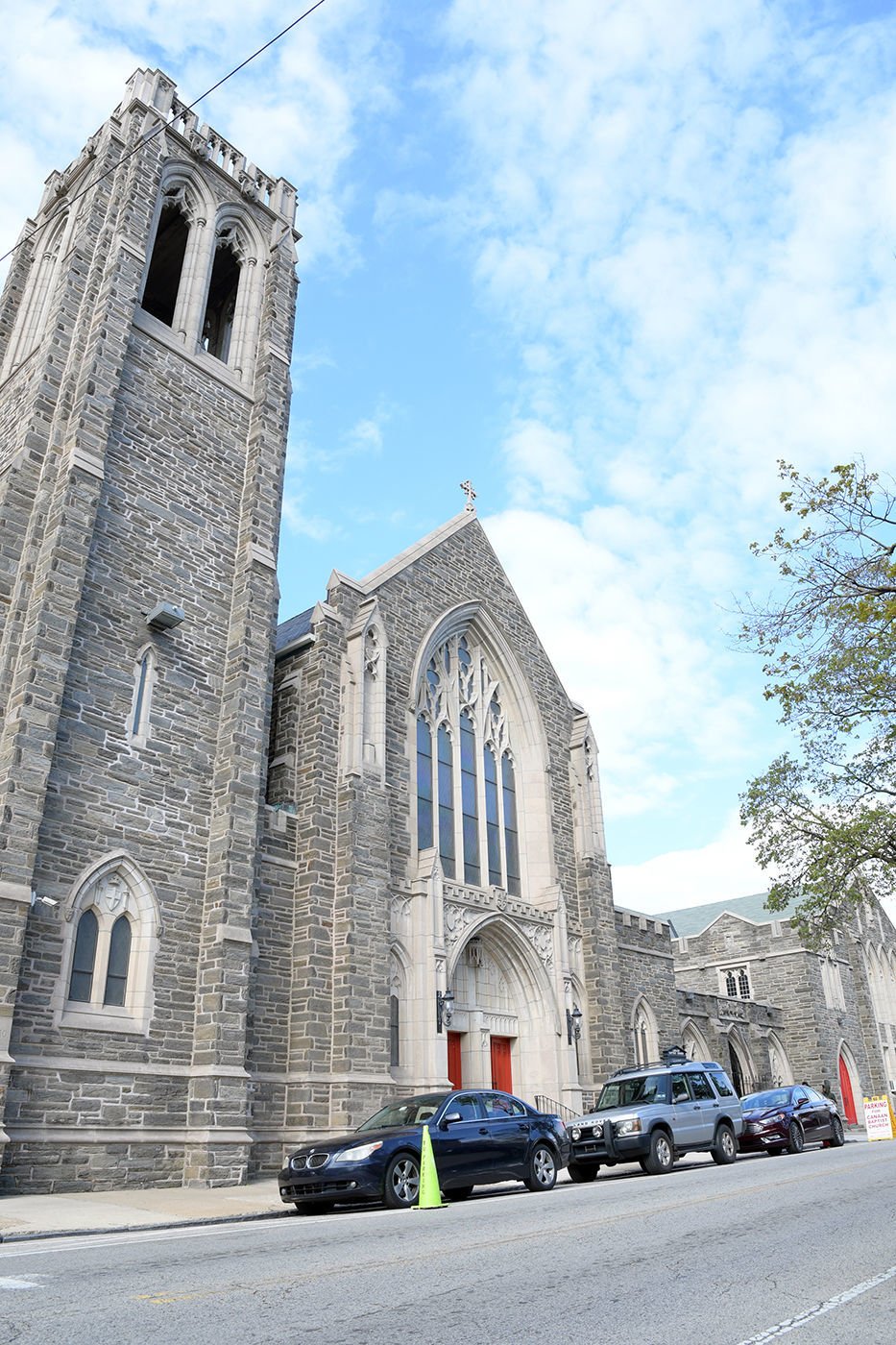 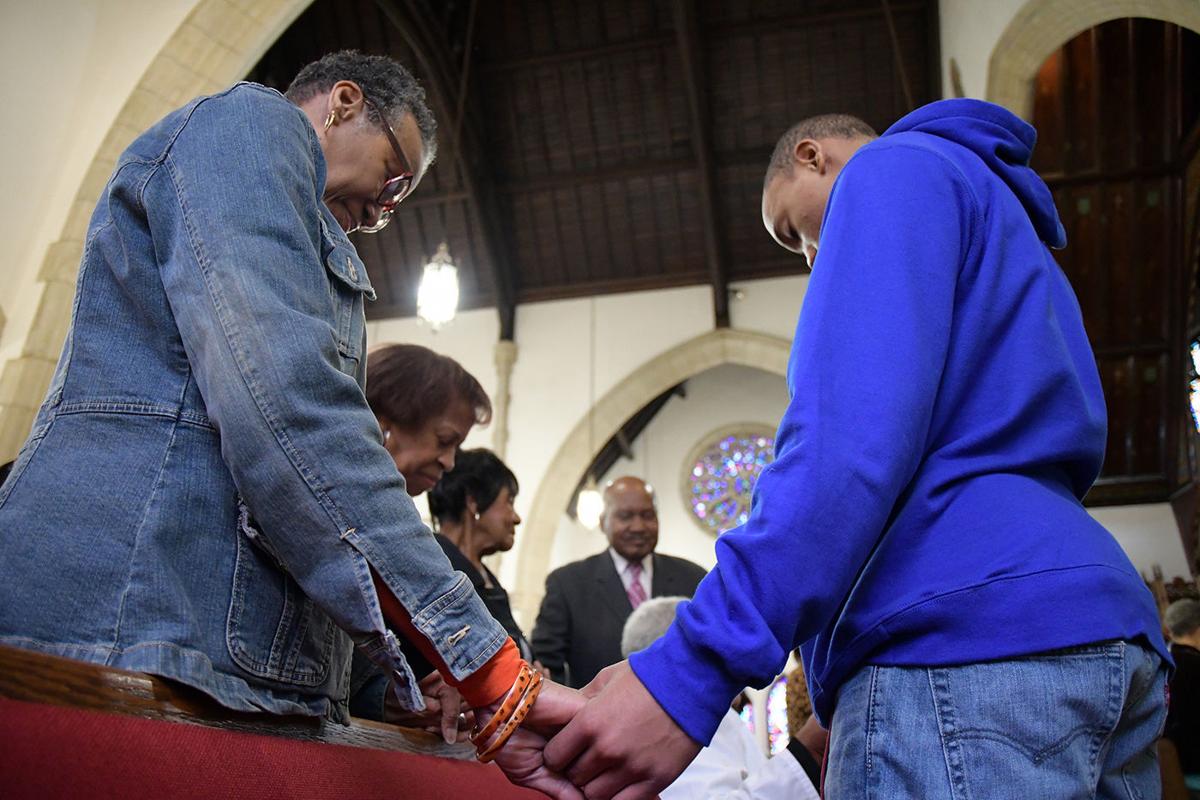 Church members of Canaan Baptist Church pray together during service. 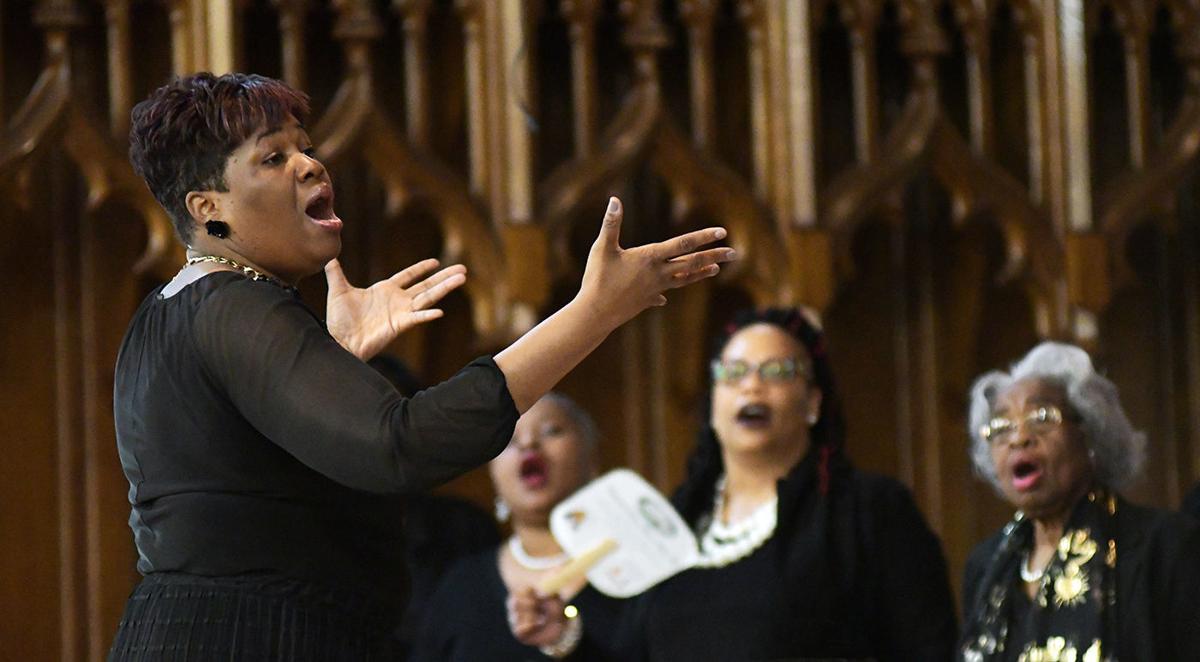 The Canaan Fellowship Mass Choir sings a song during service. 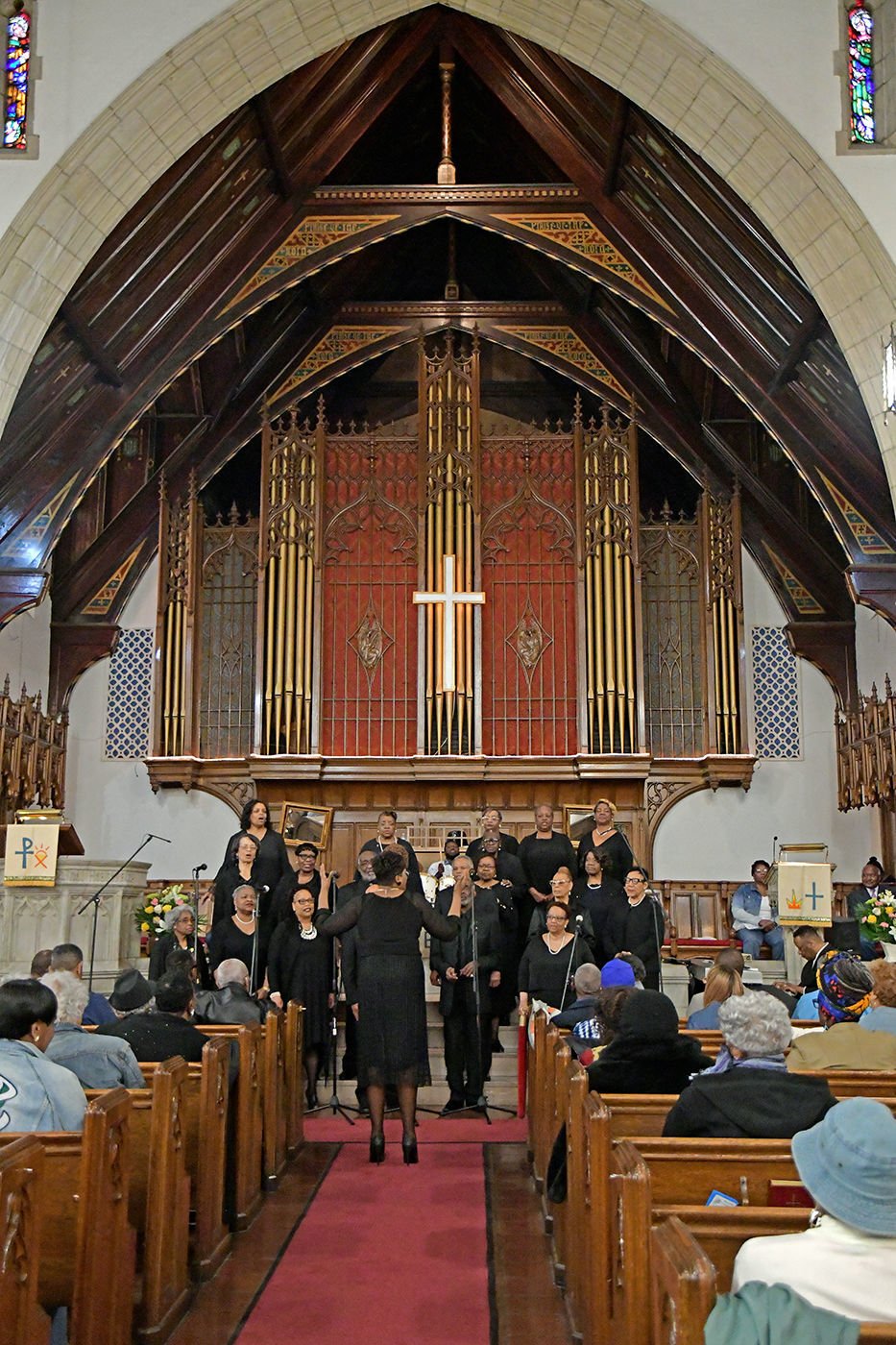 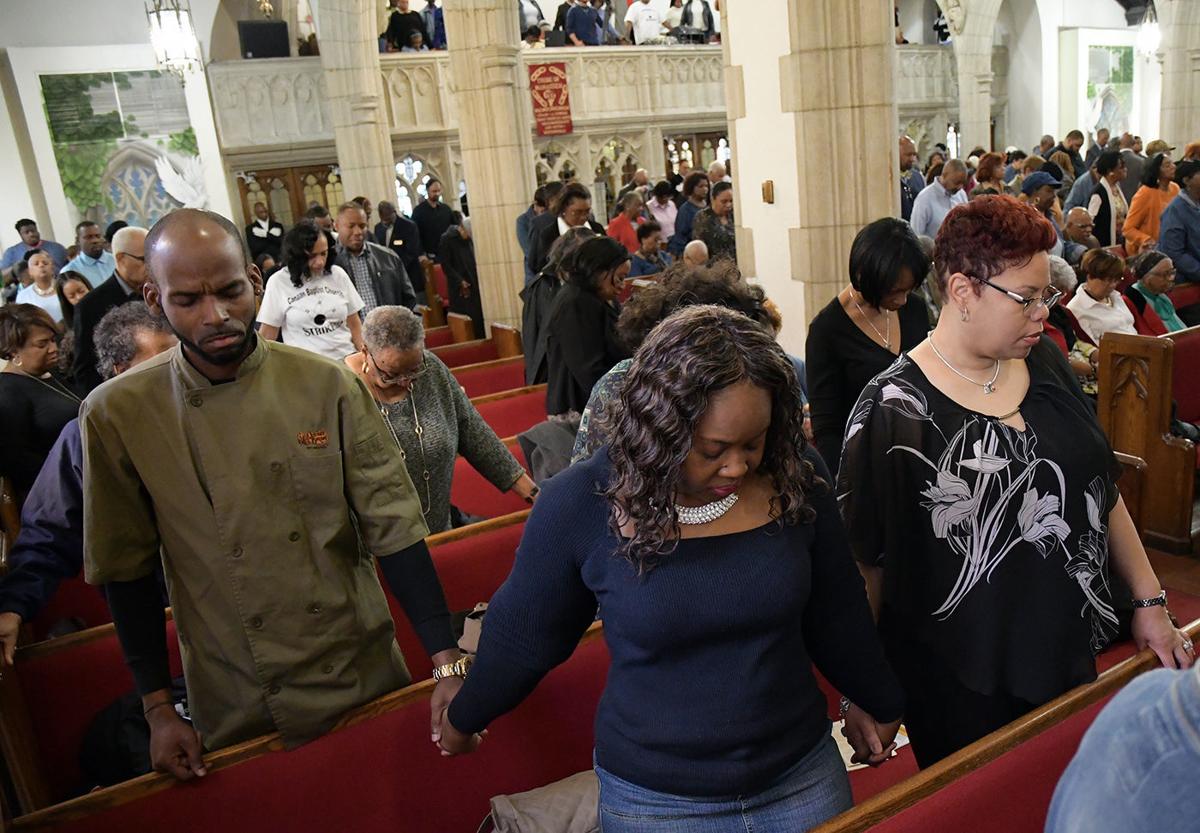 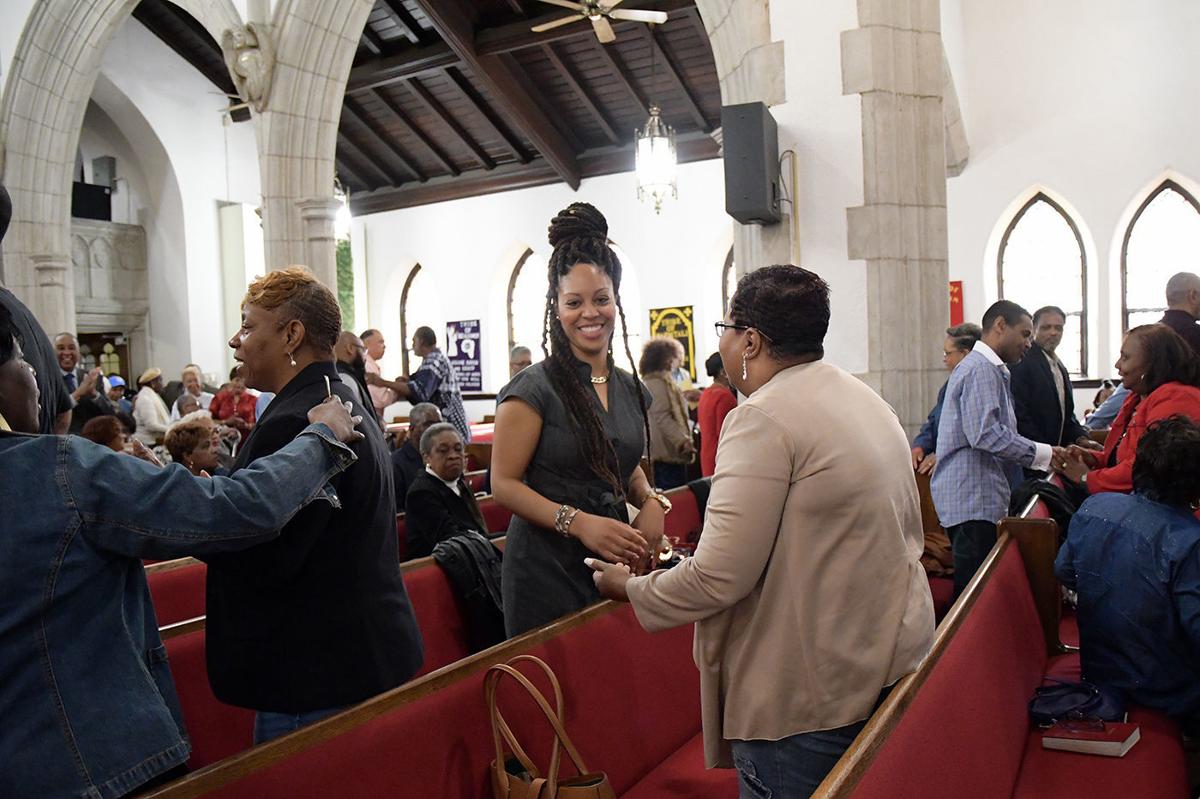 Members of the congregation fellowship with each other.

Church members of Canaan Baptist Church pray together during service.

The Canaan Fellowship Mass Choir sings a song during service.

Members of the congregation fellowship with each other.

For more than one hundred years, Canaan Baptist Church has ministered the Gospel in the city’s Germantown area. Started in 1908, the church was established to not only have an impact in the Germantown section but also on a wider scope.

“We’ve always been a congregation of one — diversity. Diversity in terms in an array of age groups, an array of situations — from married couples to singles and single parents — as well as diversity of generations,” said the Rev. Derick Brennan Sr., the lead pastor.

“We always like to say that Canaan helps you from the cradle always to the cap and gown and then all the way to your mature adult years,” he said.

Brennan describes himself as a “son of the church,” having served as an associate pastor before leaving to pastor a church in the Harlem section of New York and later returning to Philadelphia and Canaan.

“So, I have deep affection for the Canaan because I actually married into the church: My wife grew up in Canaan, married at the church, was ordained at the church and ultimately installed as pastor of the church. So Canaan is part of my DNA as they say,” Brennan explained.

Kyra Harris, a member since 1976, was baptized at the church at the age of six.

“My mom and I have been coming here since I was four years old. She was looking for a church home at the time and found out about it [Canaan] from a friend and, as they say, the rest is history,” recalled Harris.

Harris said she became engaged in numerous church activities as she grew up, participating through the years in the junior usher board, serving as the first president of the teen usher board and teen ministry board. She was also a choir member and youth missionary.

“So, from an early age, I was kind of immersed in almost every ministry that this church had that focused on youth,” she said. “I couldn’t see myself doing anything else.”

Janeine and Syeed King have both joined the church five years ago, and Janeine recalled her initial invite was from a friend.

“When I first walked in I felt that it was a warm and welcoming church and that was something that made me want to return,” Janeine said.

Her husband wasn’t with her during her first visit, so she invited him to attend with her afterward. “We came and had a wonderful time,” she said.

Something else caught Janeine King’s attention.

“It just so happens that my daughter had friends who attended here, and I loved the way the youth church was ran and I trusted the people who were running it and she wanted to come back, so we just decided to make this our church home,” she said.

Syeed King said at the time he was worshipping at another church and was growing in his faith, but it wasn’t a church for the family.

“It was a church that I found myself, but it was important that we found a church together as a family,” he said.

So, when his wife reported about her initial visit to Canaan Baptist, he said he was thrilled.

“It intrigued me and made me want to see what exactly she saw and see if I can experience the same thing so that we could join as a family,” he said. “And that happened.”

Another important factor in their decision was the way in which the pastor welcomed congregants to the church.

“A lot of churches that you go to, the pastor doesn’t even care about your name,” she said.

Not so at Canaan.

Janeine King remembered her very first one-on-one encounter with the pastor and, during the subsequent service, he remembered not only her name but that of her husband as well.

“You don’t really get that at a lot churches,” she said.

Devon Allen said he was attracted to Canaan in 1997 because it was “Holy Spirit led, and Holy Spirit filled”.

Allen joined under its former pastor, the Rev. Gus Roman, and said that Roman would give sermons that would sustain members throughout the week.

“The congregation at Canaan are worshipful, that’s real important and also they’re engaging. They’re caring and truly believe in the mission of being a church that cares,” Allen said.

This fellowship of Saints not only includes those who are members of Canaan but, also extends outside the churches four walls and worship, Allen said.

When Cody Anderson began worshipping at Canaan, the Rev. Manuel L. Dillingham was pastor and shepherded the church from August 1982 to January 1993. However, Anderson said he didn’t join the church at that time.

“When Rev. Roman came, after Rev. Dillingham, then my wife and I joined together, and I stayed after all of these years because both pastor Roman and Pastor Brennan satisfies my soul,” Anderson said who has been a member now for 35 years.

Asked about changes he may have observed over the years, Anderson says he hasn’t seen a lot and one thing has remained consistent throughout his time there is the charity of members.

“The people at this church care you,” he said. “It’s a warm, friendly, family type church from the pastor down to every individual.”

Anderson said he have seen children raised in the church become adults.

“And I appreciate and respect the pastor. He’s bright, he’s a teacher, he’s intelligent and I just love the way that he teaches and is consistent with his messages,” Anderson said.

While the church has a significant number of adults, it also has a growing number of adolescents. So much so that Canaan created a teenage church where they can go and worship on their own level and among peers. Efforts are expended to ensure that the messages taught in the teen church are consistent with those preached on Sundays by pastor Brennan.

Members of Canaan say the church continues the legacy of its founders who envisioned a place whose focus was missions and ministry.

I am a former member of Canaan Baptist Church where I served from 1987 to 2016. After the passing of my husband, I relocated to Florida to be near to my children. However, there is a saying at Canaan, once a Canaanite, always a Canaanite. Canaan is truly the Church that cares and is led by the Holy Spirit under the guidance of Pastor Brennan. A very capable and God-endowed man.

Please join us in an incredible church experience.our church. You will be spiritually embraced and will discover
that God is alive. Karen

I am a former deaconess at Canaan Baptist under the pastorship of the last three pastors. Rev. Gus Roman was very supportive to me as I was reeling from an an abusive marriage. I moved to Aloha, Oregon in 2016. I miss being a grief facilitator in the Steppingstones Bereavement ministry and my Deaconess ministry. When I left , I was given an award for service. I enjoyed raising my two children there.

I have a correction. I became a deaconess in 1997, under the ministry of Rev. Gus Roman. I left as emeritus deaconess when I relocated.