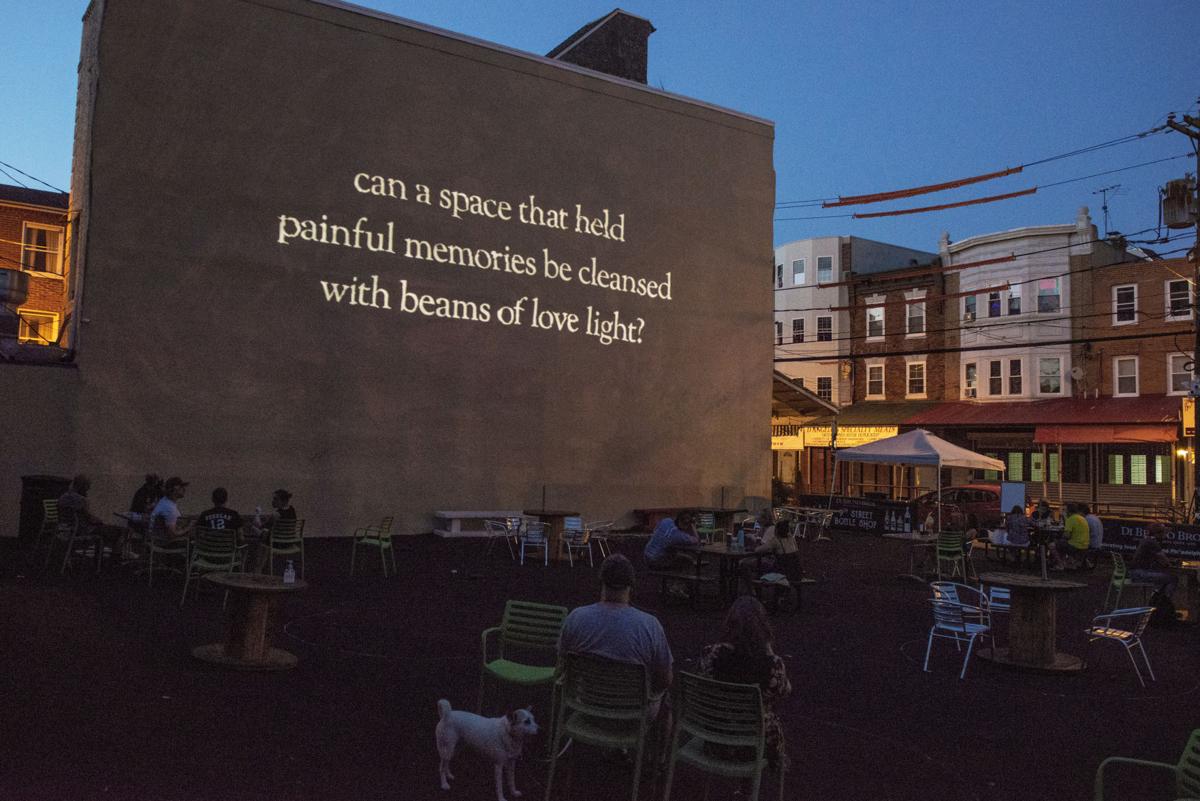 Projected haiku by poet Ursula Rucker, animated by Gabrielle Patterson, that reads “can a space that held painful memories be cleansed with beams of love light?” 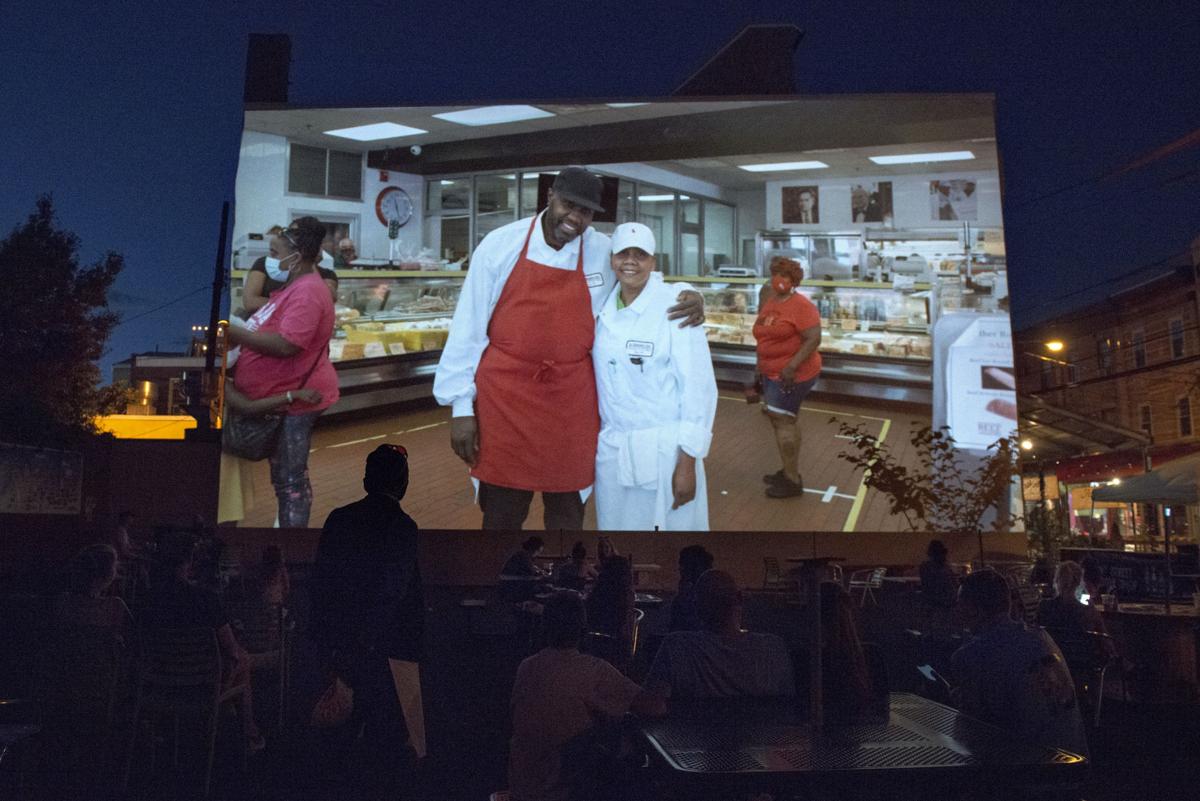 A projected still of workers in 9th Street Market from Naomieh Jovin during the exhibit on the former wall of the Frank Rizzo mural. —Lori Waselchuk Photo 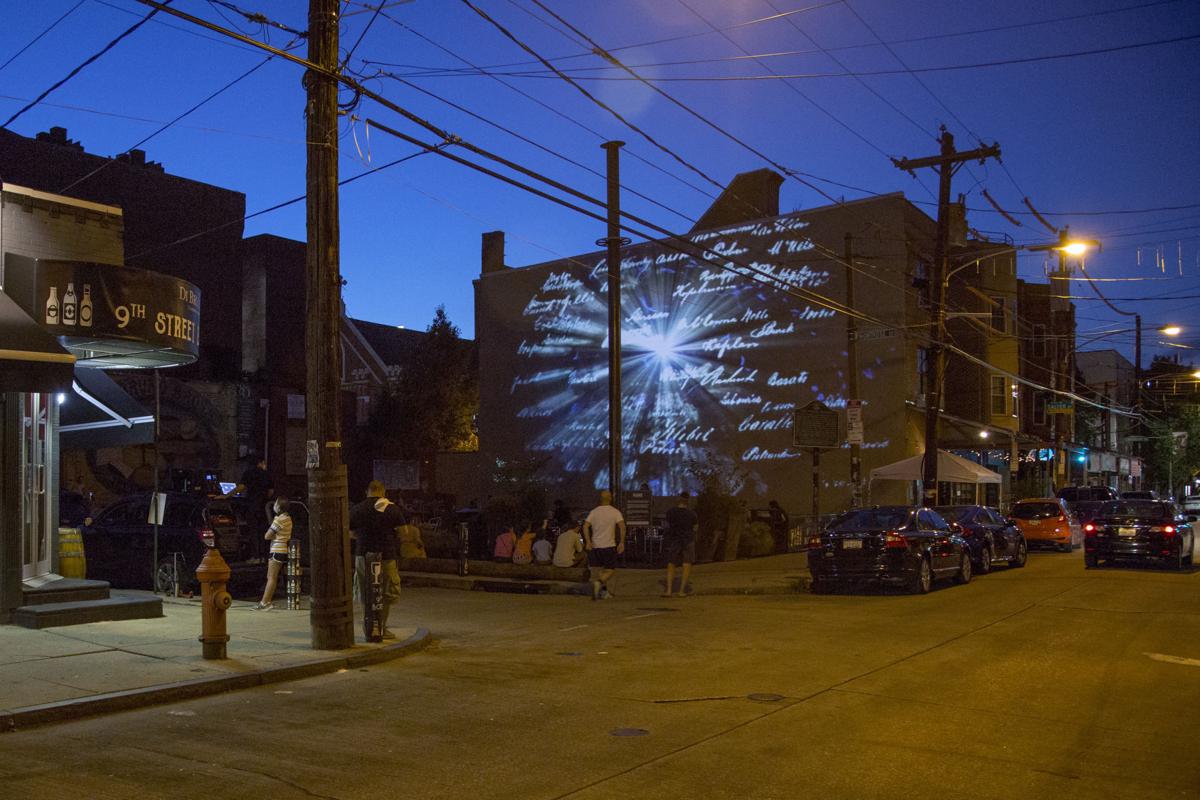 People gathered where the mural of Frank Rizzo once was for a “cleansing” of the space, as a video by Ricardo Rivera was projected on the now blank wall. —Shenid Bhayroo Photo

Projected haiku by poet Ursula Rucker, animated by Gabrielle Patterson, that reads “can a space that held painful memories be cleansed with beams of love light?”

A projected still of workers in 9th Street Market from Naomieh Jovin during the exhibit on the former wall of the Frank Rizzo mural. —Lori Waselchuk Photo

People gathered where the mural of Frank Rizzo once was for a “cleansing” of the space, as a video by Ricardo Rivera was projected on the now blank wall. —Shenid Bhayroo Photo

Michelle Angela Ortiz had been strictly quarantined inside of her South Philadelphia home for 87 days. But when she learned that workers had painted over the portrait of Frank Rizzo in the Ninth Street Market, she felt compelled to leave the house for the first time in months.

The artist, who has lived just a few blocks from the mural her entire life, walked the short distance to the now-blank space with her husband and son.

“To witness this gesture towards racial justice,” she said, recalling her motivation to see the wall. “But also witnessing what can be a new, beautiful beginning.”

Tensions had been high in the neighborhood, Ortiz said. But after the mural of Rizzo had been erased with layers of paint, neighbors immediately began to discuss the idea of doing a projection on the wall.

“I felt that whatever would go on that wall could be something filled with love and light. And, in a sense, cleansing away any type of negative thoughts or energy around that space,” Ortiz said.

And so a “community-affirmed” and artist-led projection honoring the multicultural and multigenerational communities surrounding the Ninth Street Market began to take shape. On Saturday night, that vision took over the monumental wall that for so long had divided neighbors.

The work projected onto the wall ranged from still photography to videos to poems, all capturing different people and moments from in and around the market.

Ortiz is the second generation of her family to live in the Italian Market or the Ninth Street Market, as she and her neighbors refer to the corridor.

“It is definitely a market that has been set forth by the Italian American immigrant families,” Ortiz said. That has “opened a space for so many more immigrant families to be able to come to the market and find work and thrive, or at least present a new possibility for their families.”

Ortiz comes from one of those immigrant families that settled into the area for those possibilities. Her parents — Epifania and Miguel Ortiz — have been in the Italian Market neighborhood since the mid-1970’s. When they arrived, they were one of two Latinx families on the block and faced discrimination because of it. The family had to navigate living and working in an area where sometimes they were not wanted.

But Ortiz tries to focus on neighbors who were welcoming, like Annie and Phillip Disipio, the Italian American mother and son who have been a part of her life for as long as she can remember.

“As we’re dealing with the continuous call for racial justice, what I want to try to remember is obviously, these moments where folks were courageous enough to still accept us even though we were different, to lend a hand and to lend love and kindness,” she said.

Many generations of families continue to live and work in the neighborhood — including Ortiz’s family: her parents still live in the area, and so does she, along with her husband and son.

“We’ve been here long enough to identify who have been some of the long-term neighbors and families that are here, as well as the new neighbors coming in,” Ortiz said.

That change in the makeup of the neighborhood is where Ortiz sees opportunity for a reimagined mural wall.

“How do we utilize this moment to define and determine who it is that we’re honoring?” Ortiz asked.

A moment to just let that wall breathe’

“People will have their own opinions and their own perspectives and their own experience with Frank Rizzo,” said Ortiz, especially in South Philly, where Rizzo grew up. Rizzo “was of Italian immigrants, made it to become mayor, like there’s this sense of pride in that someone was making it, someone from the community.”

Ortiz herself met Rizzo when she was a kid, back in 1991, after winning an art contest.

“It wasn’t until I was an adult that I learned about the violence that was inflicted, not just on the Black community, but also the Latino community,” Ortiz said.

As protests over the killing of George Floyd broke out over Philadelphia, Ortiz wasn’t able to participate because her son is immunocompromised. She saw the blank wall as her call to action and a chance to work with other artists.

“As the wall remains blank, it’s a moment to just let that wall breathe and let that space breathe,” she said. But it was also an opportunity, as “people are engaging in that space in a very different way.”

Ortiz, the lead “connector” on the projection, got to work to bring together the community and artists to share work that not only centered racial justice, but also representation within the market itself.

She got permission from Emilio Mignucci, a third-generation owner of Di Bruno Bros., and owner of the wall, to use the space for a one-time limited event.

“He was generous enough to open the space for us to be able to make this happen,” Ortiz said. “And I think that that was very courageous on his part, knowing that there’s been a lot of tension that he has faced.”

“Following a series of tense moments and difficult conversations, pop-up art projects like this provide an opportunity for all of us to step back, take a breath, and reimagine the space in a way that can unite as well as reflect the entire community,” said Eugene Desyatnik, president of the neighborhood association.

“While we are facing unprecedented challenges, this is also a promising time for the market, and for the neighborhood,” Desyatnik added. “It is great to see business owners, neighbors, and volunteers coming together to work on several projects to aid in the recovery and commercial vibrancy of the corridor.”

Additionally, her neighbor, Johnny Z. had his “guy” at the city turn off the street lights, Ortiz said. Residents helped move tables and chairs and set up umbrellas. “It was all really just a community effort in that way.”

Paul Farber from Monument Lab and Lori Waselchuk of Philadelphia Photo Arts Center helped connect Ortiz with artists like Ursula Rucker, and offered support in other ways leading up to and during the event. Other multimedia artists participated as well: visual artist and filmmaker, Ricardo Rivera from Klip Collective; filmmaker Laura Deutch, photographer Kevin Nguyen and Naomieh Jovin.

For Ortiz, the opening image she used was one of her mother’s hands, with clear water running through them over a big bowl on her lap. “The big bowl that she has on her lap is actually very similar to the bowl that she used to carry on her head selling food in the streets back home in Colombia.”

Ortiz also projected an image of her husband enveloping her son in a hug. She wanted to depict him as “a symbol of a Black man, as a father, as the person who is protecting and taking care of our child, who is now the next generation born and raised here in this community.” She also featured an image of Lee Espositio, from Esposito Meats, a butcher shop founded by Italian immigrants over 100 years ago.

Nguyen, one of the artists in the installation, is the son of a Vietnamese butcher at that shop, who has worked there for over 30 years.

No decisions have been made on whether the projection will take place again, Ortiz said.

“When you’re dealing with a moment that’s really charged and full of tension, how you react also takes a lot of courage,” Ortiz said. “In my mind, I felt that having that space open, being able to get all the artists together, we definitely were courageous in this moment to say, we want to fill this space with light.”