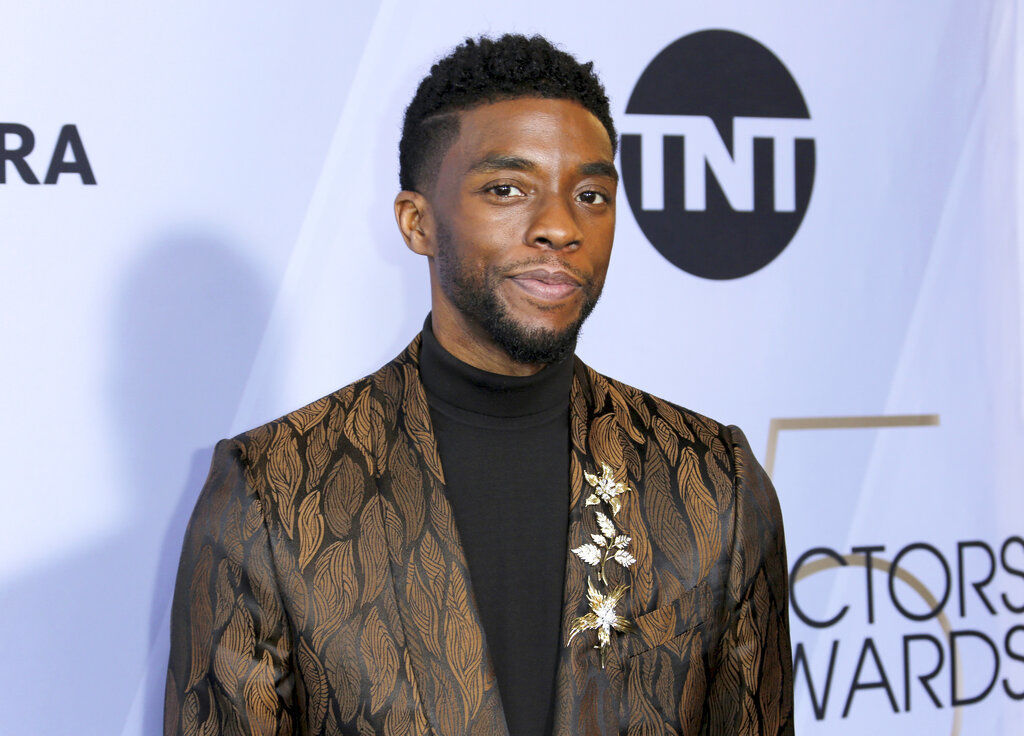 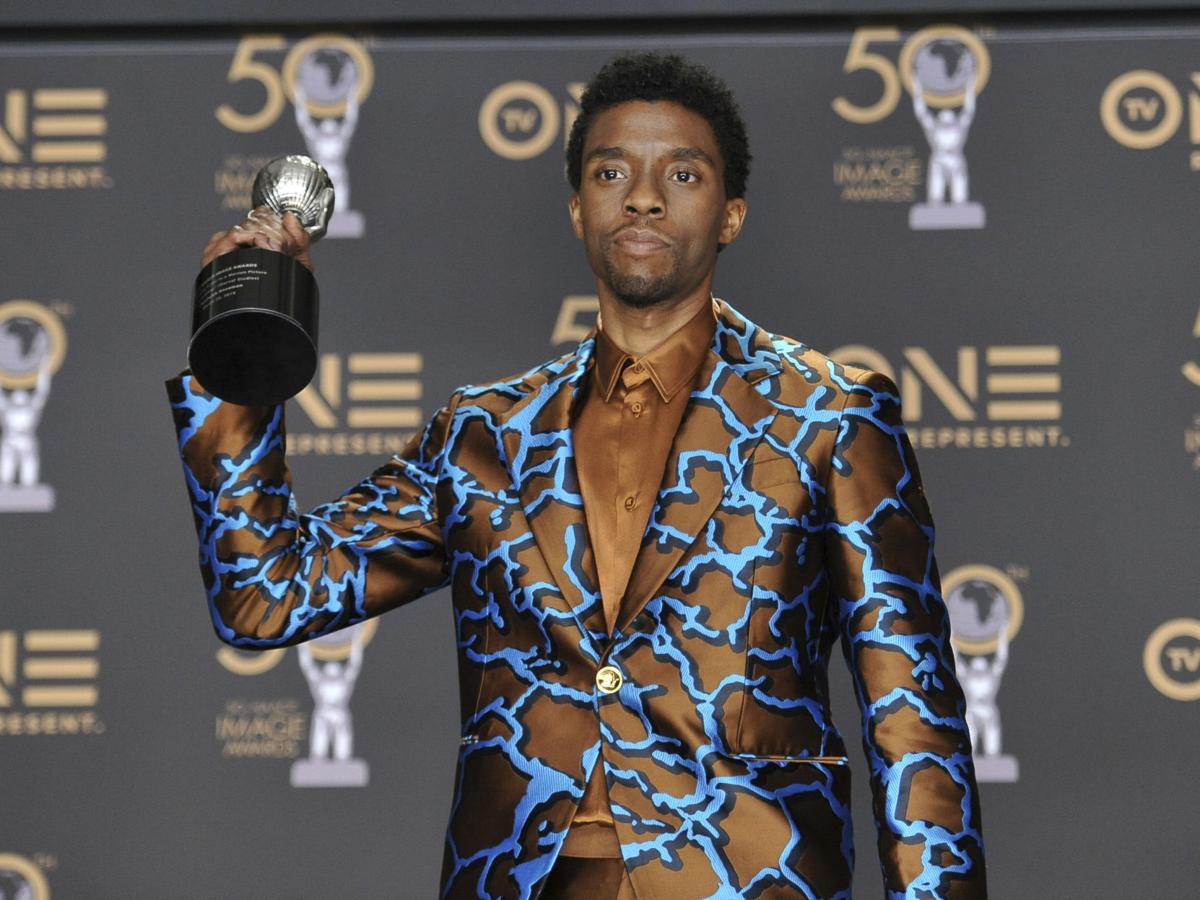 Chadwick Boseman poses in the press room with the award for outstanding actor in a motion picture for “Black Panther” at the 50th annual NAACP Image Awards at the Dolby Theatre in Los Angeles. -Photo by Richard Shotwell/Invision/AP, File

Chadwick Boseman poses in the press room with the award for outstanding actor in a motion picture for “Black Panther” at the 50th annual NAACP Image Awards at the Dolby Theatre in Los Angeles. -Photo by Richard Shotwell/Invision/AP, File

LOS ANGELES — First Chadwick Boseman slipped on the cleats of Jackie Robinson, then the Godfather of Soul's dancing shoes, portraying both Black American icons with a searing intensity that commanded respect. When the former playwright suited up as Black Panther, he brought cool intellectual gravitas to the Marvel superhero whose "Wakanda forever!" salute reverberated worldwide.

As his Hollywood career boomed, though, Boseman was privately undergoing "countless surgeries and chemotherapy" to battle colon cancer, his family said in a statement announcing his death at age 43 on Friday. He'd been diagnosed at stage 3 in 2016 but never spoke publicly about it.

The cancer was there when his character T'Challa visited the ancestors' "astral plane" in poignant scenes from the Oscar-nominated "Black Panther," there when he first became a producer on the action thriller "21 Bridges," and there last summer when he shot an adaptation of a play by his hero August Wilson. It was there when he played a radical Black leader — seen only in flashbacks and visions — whose death is mourned by Vietnam War comrades-in-arms in Spike Lee's "Da 5 Bloods."

"A true fighter, Chadwick persevered through it all, and brought you many of the films you have come to love so much," his family said. "It was the honor of his career to bring King T'Challa to life in Black Panther." Boseman died at his home in the Los Angeles area with his wife and family by his side, his publicist Nicki Fioravante told The Associated Press.

Boseman is survived by his wife and a parent and had no children, Fioravante said.

Born and raised in South Carolina, where he played Little League baseball and AAU basketball, Boseman graduated from Howard University in Washington, D.C. He wrote plays, acted and directed in theater and had small roles in television before landing his breakthrough role.

His striking portrayal of the color-line-demolishing baseball star Robinson opposite Harrison Ford in 2013's "42" drew attention in Hollywood and made him a star. A year later, he wowed audiences as Brown in the biopic "Get On Up."

Boseman died on a day that Major League Baseball was celebrating Jackie Robinson day. "His transcendent performance in '42' will stand the test of time and serve as a powerful vehicle to tell Jackie's story to audiences for generations to come," the league wrote in a tweet.

Expressions of shock and despair poured in late Friday from fellow actors, athletes, musicians, Hollywood titans, fans and politicians. Viola Davis, who acted alongside Boseman in "Get On Up" and the upcoming Wilson adaptation, said: "Chadwick.....no words to express my devastation of losing you. Your talent, your spirit, your heart, your authenticity."

"He was a gentle soul and a brilliant artist, who will stay with us for eternity through his iconic performances," said Denzel Washington, who funded a scholarship Boseman used to study theater at Oxford and produced the upcoming Wilson film.

Vice Presidential candidate Kamala Harris, a Howard alumna, wrote the actor "was brilliant, kind, learned, and humble. He left too early but his life made a difference."

Disney executive chairman Bob Iger called Boseman "an extraordinary talent, and one of the most gentle and giving souls I have ever met." "Captain America" actor Chris Evans called Boseman "a true original. He was a deeply committed and constantly curious artist. He had so much amazing work still left to create."

His T'Challa character was first introduced to the blockbuster Marvel cinematic universe in 2016's "Captain America: Civil War," and his "Wakanda forever" salute became a pop culture landmark after the release of "Black Panther" two years ago.

"I don't think the world was ready for a 'Black Panther' movie before this moment. Socially and politically, it wasn't ready for it," he told AP at the time.

The film's vision of Afrofuturism and the technologically advanced civilization of Wakanda resonated with audiences, some of whom wore African attire to showings and helped propel "Black Panther" to more than $1.3 billion in global box office. It is the only Marvel Studios film to receive a best picture Oscar nomination.

Boseman said he more easily identified with the film's antagonist, played by Michael B. Jordan, who had been cut off from his ancestral roots: "I was born with some Killmonger in me, and I have learned to T'Challa throughout my studies," he told AP while promoting the film.

"It's the place where you start. All African Americans, unless they have some direct connection, have been severed from that past. There's things that cannot be tracked," he continued. "You were a product, sold. So it's very difficult as an African American to connect at some points directly to Africa. I have made that part of my search in my life. So those things were already there when I got into the role."

The character was last seen standing silently dressed in a black suit at Tony Stark's funeral in "Avengers: Endgame." A "Black Panther" sequel had been announced, and was one of the studio's most anticipated upcoming films.

Even at the outset of his Hollywood career, Boseman was clear-eyed about — and even skeptical of — the industry in which he would become an international star.

"You don't have the same exact experience as a Black actor as you do as a white actor. You don't have the same opportunities. That's evident and true," he told AP while promoting "42." "The best way to put it is: How often do you see a movie about a black hero who has a love story ... he has a spirituality. He has an intellect. It's weird to say it, but it doesn't happen that often."

"Black Panther," written and directed by Ryan Coogler, helped drive a conversation in Hollywood about the importance of featuring non-white characters in and hiring non-white filmmakers for its most high-profile films. Actor Simu Liu, starring in Marvel's first film centered on an Asian character, tweeted: "Without Chadwick, and what he gave to his character, there is no Shang Chi. Period. My career rides on the coattails of a great man."

In addition to Robinson and Brown, Boseman portrayed the future U.S. Supreme Court Justice Thurgood Marshall in 2017's "Marshall." He humanized the larger-than-life historical figures with the same soulful, reserved dignity — interrupted by flashes of sparkling wit — that he would later bring to T'Challa.

He took on his first producing job in last year's action thriller "21 Bridges," in which he also starred. Boseman completed one last performance, in a Netflix adaptation of August Wilson's "Ma Rainey's Black Bottom."

He revered the playwright famous for his depiction of the Black experience, writing in a 2013 Los Angeles Times essay: "For the songs, rituals and folklore that were lost in slavery's middle passage, his plays are those forgotten songs remixed for the struggles of adapting to these shores ... In the similar way that Wilson's work was influenced by the blues of Bessie Smith, Muddy Waters and W.C. Handy, my plays were infused with Tupac, Biggie and Black Star."

Boseman first got into theater, acting and writing plays as an undergrad at Howard. He visited Africa for the first time during college with director and theater professor Mike Malone, working in Ghana to preserve and celebrate rituals with performances on a proscenium stage. He told AP the trip had been "one of the most significant learning experiences of my life."

Boseman had roles on TV shows like ABC Family's "Lincoln Heights" and NBC's "Persons Unknown," but before "42" he had only acted in one film, 2008's football drama "The Express."

While deeply private and often guarded in his public appearances and interviews, he made clear that he understood the significance of his work and its impact on the broader culture.

At the 2019 Screen Actors Guild Awards, "Black Panther" won best ensemble, electrifying the room. Before an auditorium full of actors, Chadwick Boseman stepped to the microphone. He quoted Nina Simone: "To be young, gifted and black," and put the moment in context.

"We know what it's like to be told there isn't a screen for you to be featured on, a stage for you to be featured on. ... We know what's like to be beneath and not above. And that is what we went to work with every day," said Boseman. "We knew that we could create a world that exemplified a world we wanted to see. We knew that we had something to give."

it is so heart breaking that so many young black sisters and brothers are dying from this deadly desires. I lost a niece at 43 years old back in 2015 with colon cancer. If diagnosed early, It can be life saving. My condolences to the family, he will be truly missed. My prays are with you.