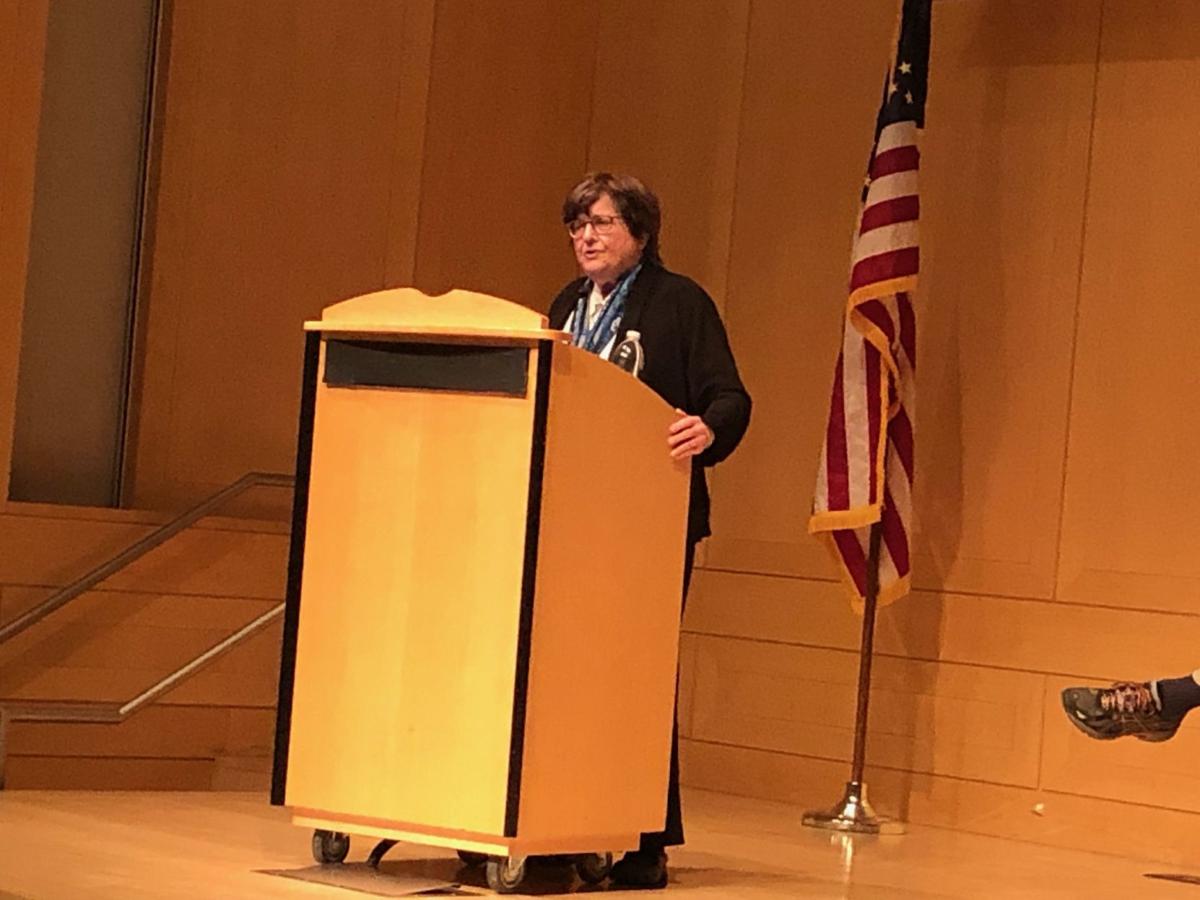 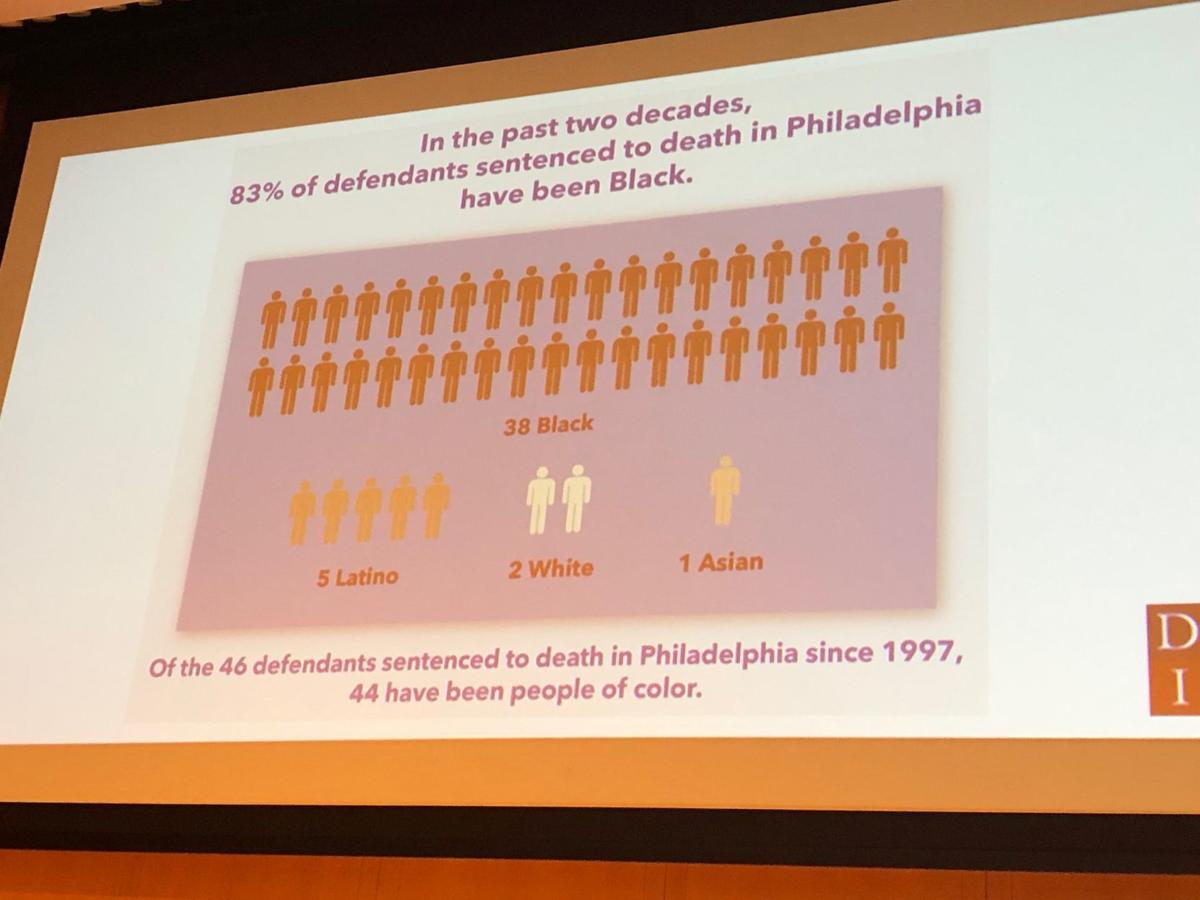 Statistics show most of the people sentenced to death in Philadelphia have been people of color.

Statistics show most of the people sentenced to death in Philadelphia have been people of color.

Each man walked across the stage at the National Constitution Center on Thursday. Some were solemn and stone-faced, while others looked relieved, but all had a common theme.

“If Maryland had its way, I would be dead today …”

“If the great state of Alabama had its way, I’d be dead today …”

“If the Commonwealth of Pennsylvania had its way, I’d be dead today …”

All of the men had been exonerated and freed from death sentences and were a part of the celebration of the 15th anniversary of Witness to Innocence, an advocacy group comprising death row survivors, their families and anti-death penalty advocates who are seeking to abolish death sentences.

One of the men on the stage was Ray Krone, who co-founded the organization in 2003 with Sister Helen Prejean. Krone, a York County native and Air Force veteran, served 10 years in prison in Arizona — three of those on death row — for a 1991 murder he didn’t commit.

“At the age of 35, I was questioned about the murder of a bartender out in Phoenix,” he said. “A local barmaid was found stabbed to death in a men’s bathroom. No robbery or break in.

“They questioned a couple of bartenders and one of them said that she liked a guy named Ray Krone,” he said. “I had a protruding front tooth from a car accident way back when I was young, and two days later I was arrested when the medical examiner said a mark on the body matched my teeth. I was arrested and called the ‘Snaggletooth Killer.’”

Krone had a clean criminal record and was convicted after a three-day trial and just three hours of jury deliberation. Krone said at his 1992 sentencing that he had no remorse because he did not commit the crime.

“I was promptly called a monster and was sentenced to death,” Krone said. Three years later, his initial conviction was overturned when new evidence was discovered, and he was given a new trial.

During that trial, DNA evidence was taken from the bite mark that cleared him, but the jury convicted him a second time. He was resentenced to 25 years to life.

After years of denied appeals, Arizona law allowed DNA testing to be redone. Tests were run on the victim’s clothing, and it again cleared Krone.

“By that time there was a DNA databank around the nation and it hit on a match of a man who had a previous record of sexual assault on women and children,” he said. “On April 8, 2002, I was released after 10 years, three months and eight days.”

Pennsylvania is one of 30 states that currently have a death penalty statute, and there are currently 51 people on death row who were sentenced in Philadelphia. In 2015, Gov. Tom Wolf declared a moratorium on the death penalty as more studies are done to determine its future in the state.

Among those in attendance at the Thursday event was Philadelphia District Attorney Larry Krasner, a staunch advocate of abolishing the death penalty. His opposition was one reason he won election in 2016.

As he stood on the stage addressing the freed men, he talked about how he once served on a jury in Chester County that decided whether a man would face death. Krasner said that what he witnessed in the courtroom and the jury room forever changed his outlook on the death penalty.

“What I saw was racism,” Krasner said bluntly. “And that’s not my opinion. It was things that were actually said.

“What I saw was not only racism applied to the defendant, but I saw racism that was applied to the jurors that would have a different opinion. I saw the frailty and I saw strength.”

Krasner, who choked up as he addressed the men, said a juror had a mental breakdown during the trial that led to a deal that gave the defendant life in prison for first-degree murder and spared him the death penalty.

“Over a very long period of time, there has been a decline in the willingness of juries in Philadelphia County and across the country in coming to death verdicts,” Krasner said. “The public no longer wants it.”

His attitude toward the death penalty has been in stark contrast to district attorneys of the past — of both political parties. During the stints of former District Attorneys Ed Rendell and Ron Castille, along with the early years under Lynne Abraham, there was a spike in death sentences for violent crimes.

“I used to look in amazement that in Philadelphia, presumably a Democratic liberal jurisdiction, that there would be a whole parade of district attorneys who would just be sending people to death row in extraordinary rates,” said Barry Scheck, co-founder of the Innocence Project. “How can that be?”

Rendell, a leader among Democrats, had a particularly aggressive tenure as district attorney. At one stretch between 1982 and 1986, Philadelphia County averaged 11.25 death row convictions per year. The trend continued under the Republican Castille before it began to tail off under Abraham and Seth Williams as opposition to death sentences grew. There has been one death sentence since 2016 and none under Krasner.

An overwhelming number of the convictions were of Black men.

“As the number of death sentences has dropped, the racial concentration has gotten worse,” said Robert Dunham, executive director of the Death Penalty Information Center. “In the past two decades, 83 percent of all of the individuals sentenced to death in Philadelphia County have been African American.”

“It shows that the system, even as it seeks the death penalty less, is incapable of removing the vestiges and presence of discrimination,” Dunham said. “Year after year, the results are the same.”

Since 1978, there have been 201 death sentences in Philadelphia. Of those, 134 have been overturned, with three people being fully exonerated.

“If we make these many mistakes across one jurisdiction, imagine what it looks like across the country,” Dunham said.

Nationally, 164 people have been fully exonerated from death sentences. Witness to Innocence says that countless others are fighting for exoneration through appeals processes and DNA evidence.

Ray Krone was the 100th man to be exonerated. He said he was in favor of the death penalty before he was burned by the system. He also bristles at the idea that his exoneration proved that the system actually works.

Krone said his two convictions — and the battle to be freed — are proof that the system is broken.

“If the system worked, while I was in there for something I didn’t do, where was the person who did it?” he said. “Whether it was incompetence or intent, there was a reason I went to death row and the person who was guilty was protected by that system that we want to trust.

“That’s something for people to think about,” he said. “While we’re making mistakes out here, the guilty person is walking around, and we shouldn’t accept a system like that.”

Courtney Haveman developed a passion for skin care while working at a tanning salon.

A new report from a group that tracks the death penalty in the United States finds that executions have reached the lowest point since 1991.

“People who go to jail are usually young,” Krasner said. “People who get pulled into the criminal justice system as juveniles are young, too. …

Philadelphia leaders recognize National Day of Empathy for the incarcerated

After her release from prison in November 2017, Shawn Baker needed help.

In response to a study by the District Attorney’s Office, faith leaders locally and nationally have voiced their thrown their support for the …