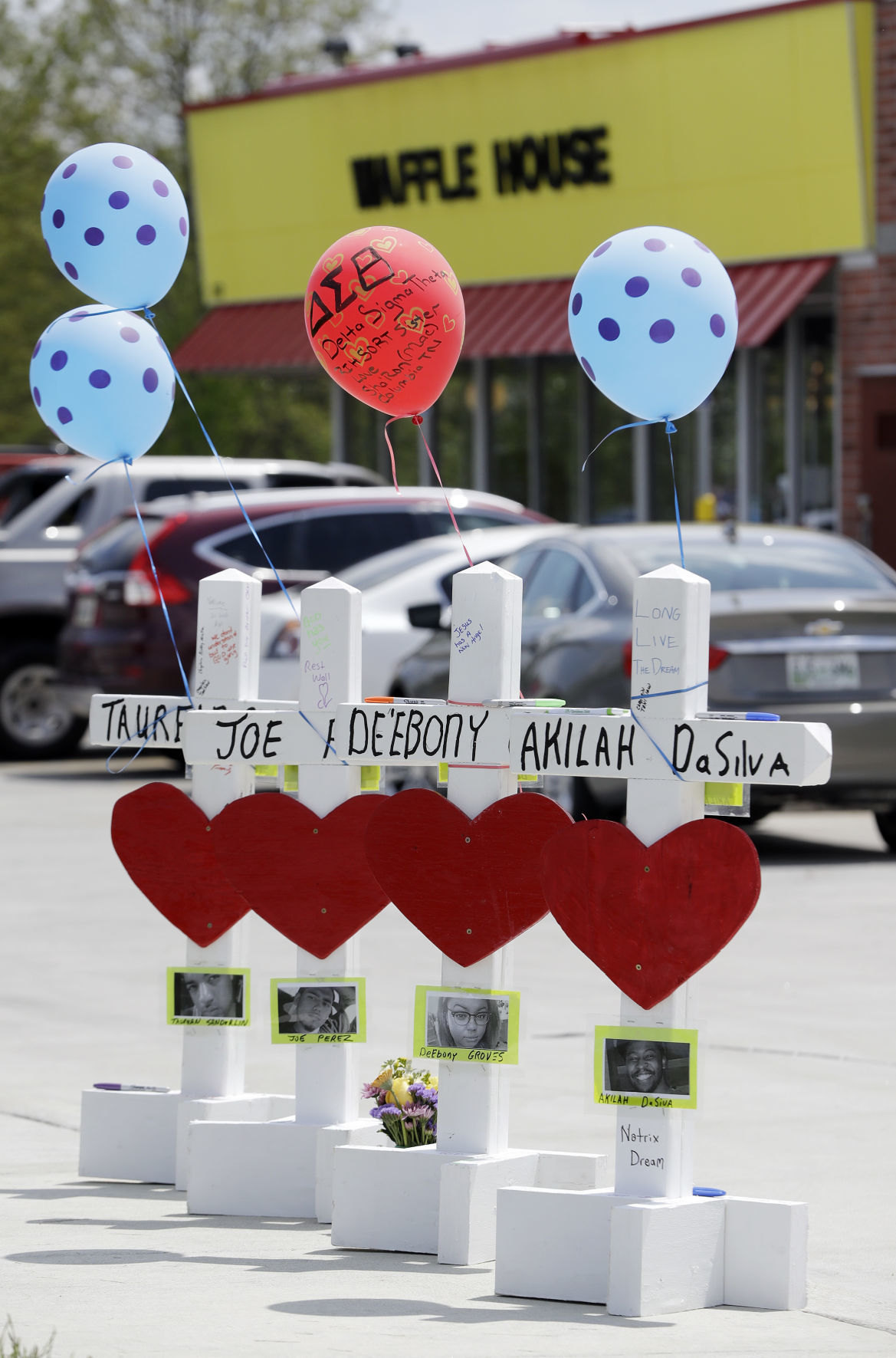 Four wooden crosses stand as a memorial to the four shooting fatalities outside the Waffle House restaurant in Nashville, Tenn. — AP Photo/Mark Humphrey 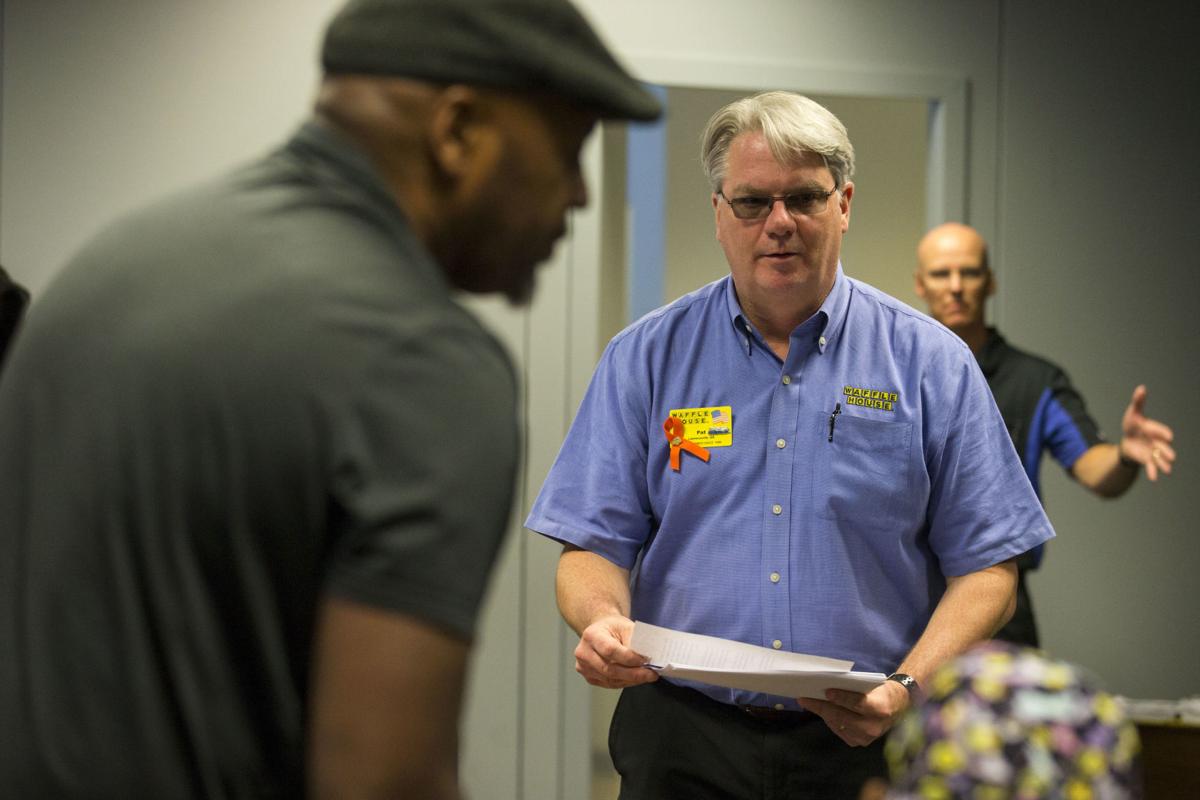 Four wooden crosses stand as a memorial to the four shooting fatalities outside the Waffle House restaurant in Nashville, Tenn. — AP Photo/Mark Humphrey

ATLANTA — A week into the firestorm triggered by a Black woman’s controversial arrest at an Alabama Waffle House, the iconic Southern diner attempted to extend an olive branch to opponents calling for a boycott — while simultaneously defending the actions of its employees.

Activists from a number of Atlanta advocacy groups held protests and press conferences outside Waffle House’s headquarters earlier this week, calling for more information and accountability in the case of 25-year-old Chikesia Clemons.

A cellphone video captured her arrest, showing her being wrestled to the ground by several police officers in a Saraland, Ala., restaurant. Her breasts were exposed in the process.

Waffle House representatives invited the activists — including members of the Alliance for Black Lives, Black Lives Matter Atlanta, the Gwinnett County NAACP and Street Peace America — into their headquarters for what turned into a tense question-and-answer session.

A gaggle of media members was there to document the encounter, ensuring that Waffle House — as ubiquitous in the South as grits and gravy — would spend another day in a not-so-flattering spotlight.

Whether due to tragedy, scandal or social unrest, Waffle House had an unusually tumultuous April. And activists are vowing to make May a month of unrest.

As the representatives from various groups sat down in the corporate meeting room, they were each handed a sheet of paper.

It contained a written statement from Waffle House supportive of the employees involved in the Alabama incident.

“Previously, we stated that upon reviewing security video and eyewitness statements, it was our belief that our associates calling the police was necessary and appropriate,” the statement said, in part. “In the days since, we have gathered additional details and information. Witnesses say several threats were made to our associates including threats of violence, and that’s why the police were called.”

The statement went on to say that Waffle House employees are trained to call authorities “anytime there is any concern about their personal safety or that of their customers.” It said the restaurant’s investigation into the Clemons incident would be completed this week.

Many activists said they weren’t satisfied with Monday’s meeting, as some called for a nationwide boycott of the restaurant to begin on Friday.

“Our people,” Dawn O’Neal from Black Lives Matter Atlanta said, “are not safe in Waffle House.”

That the criminal charges against Clemons be dropped;

That authorities release video of the incident that includes audio, which they said “will prove officers threatened Ms. Clemons”;

That Waffle House release a statement denouncing the way Clemons’ arrest was handled;

That Waffle House take “disciplinary action” against the employees involved in the incident.

Representatives from another group called Street Peace America asked for Waffle House to cooperate with an investigation by the Federal Trade Commission’s consumer protection division.

Monday’s events marked just the latest entry in a recent series of high-profile incidents for Waffle House, which was born in Avondale Estates, near Atlanta, and located its corporate headquarters in nearby Gwinnett County years ago.

On April 11, a Fulton County jury brought an end to a years-long sex scandal involving Waffle House chairman Joe Rogers Jr. The jury acquitted Mye Brindle (a former housekeeper for Rogers) and her attorneys on criminal charges that accused them of secretly filming sexual encounters between Brindle and Rogers and using the tape to try and extort Rogers.

The same day Clemons was arrested, a man named Travis Reinking walked into a Waffle House in Nashville, Tenn., and opened fired with an AR-15 rifle. Four people were killed and more were injured.

Video also has surfaced of another racially charged incident from April 22, this time at a Waffle House in Pinson, Ala., not far from Birmingham. The Black woman who shot the video says she was denied service and locked out of the restaurant because of her race.

Warner, the Waffle House spokesman, said Monday that the incident was being investigated and “that associate should not have locked the door.” He declined to comment on the employee’s status.

“Waffle House is a welcoming place for everyone,” the restaurant’s written statement said, “and we are fortunate to enjoy a very diverse and loyal customer base that we do our best to serve every day.” — (The Atlanta Journal-Constitution.)