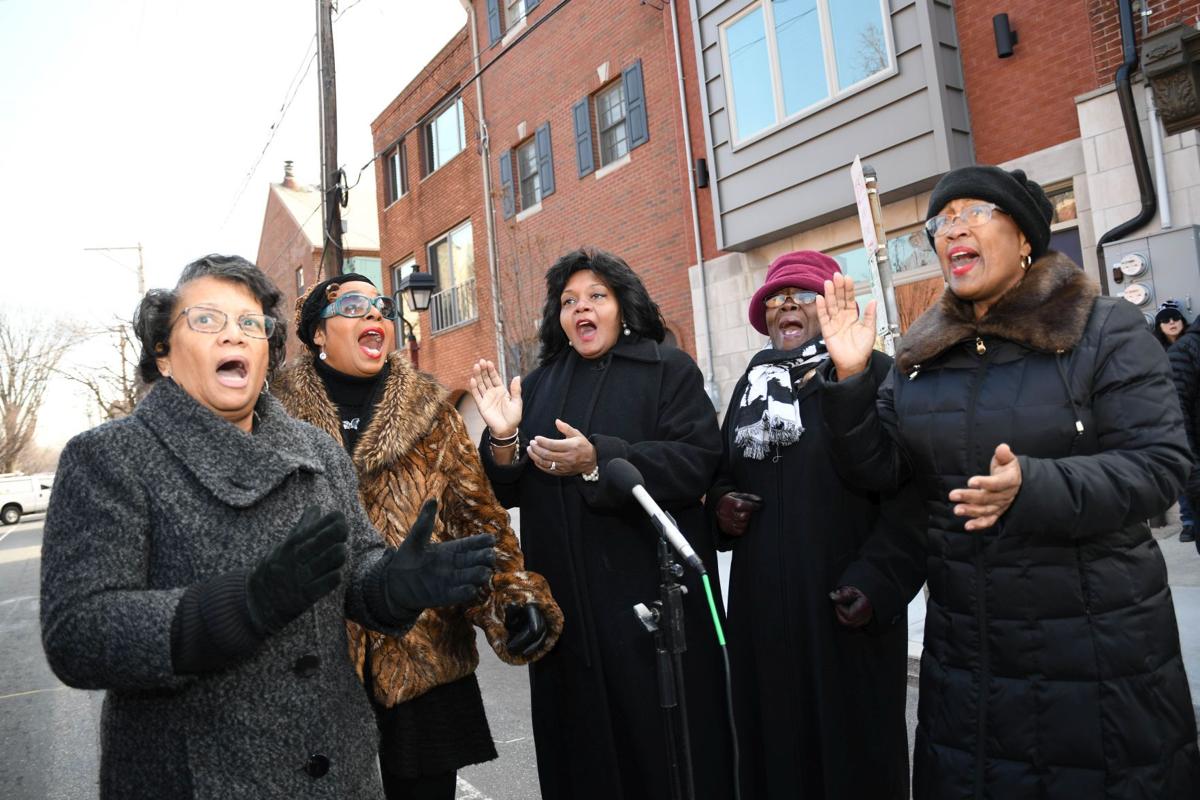 Members of Mother Bethel A.M.E. choir sing "We Shall Overcome" during the MLK Dare Coalition's "March for a Better America" on Monday, Jan. 16. TRIBUNE PHOTO BY MARISSA WEEKES MASON 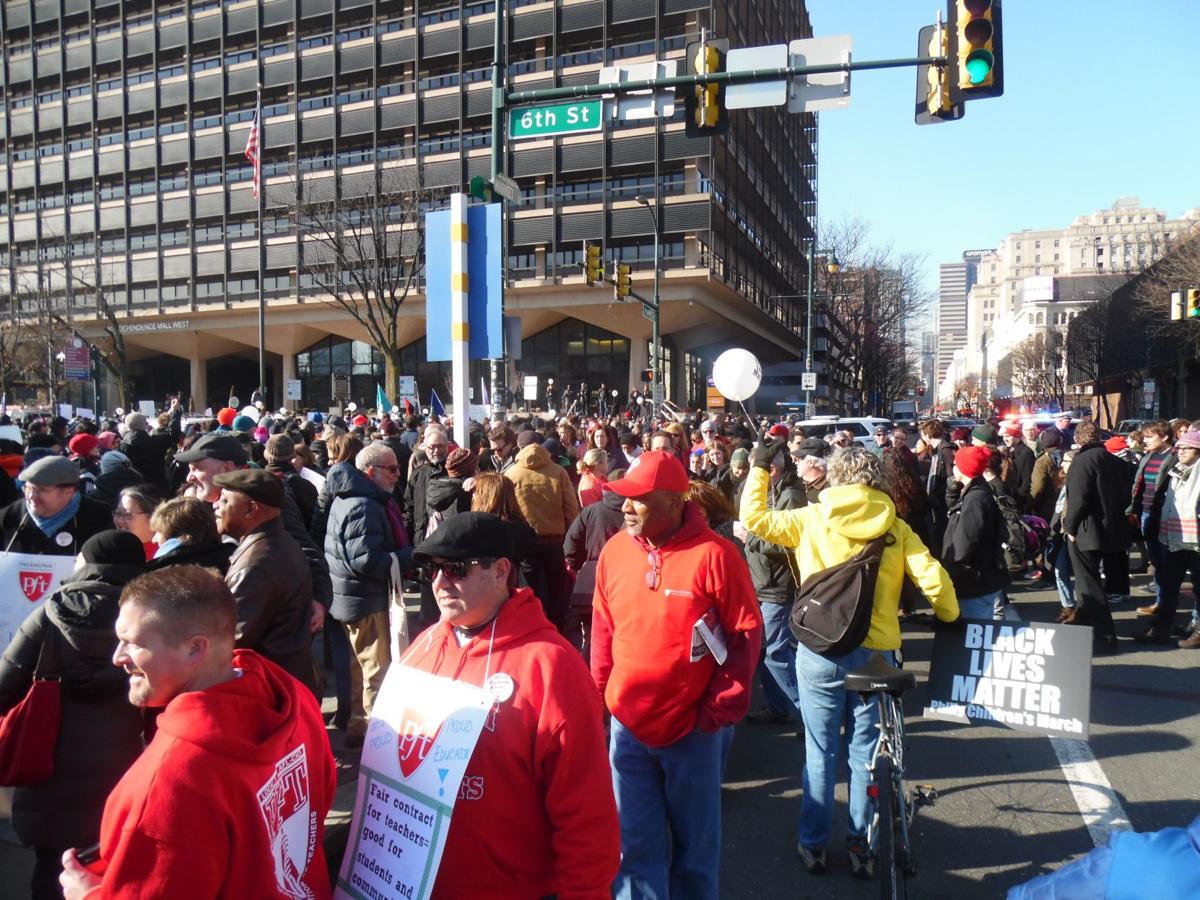 Demonstrators participate in "A March for a Better Philadelphia," traveling from the President's House in Center City to Mother Bethel AME Church at 6th and Lombard, on Martin Luther King Day, Monday, Jan. 16. TRIBUNE PHOTO BY NATHANIEL LEE 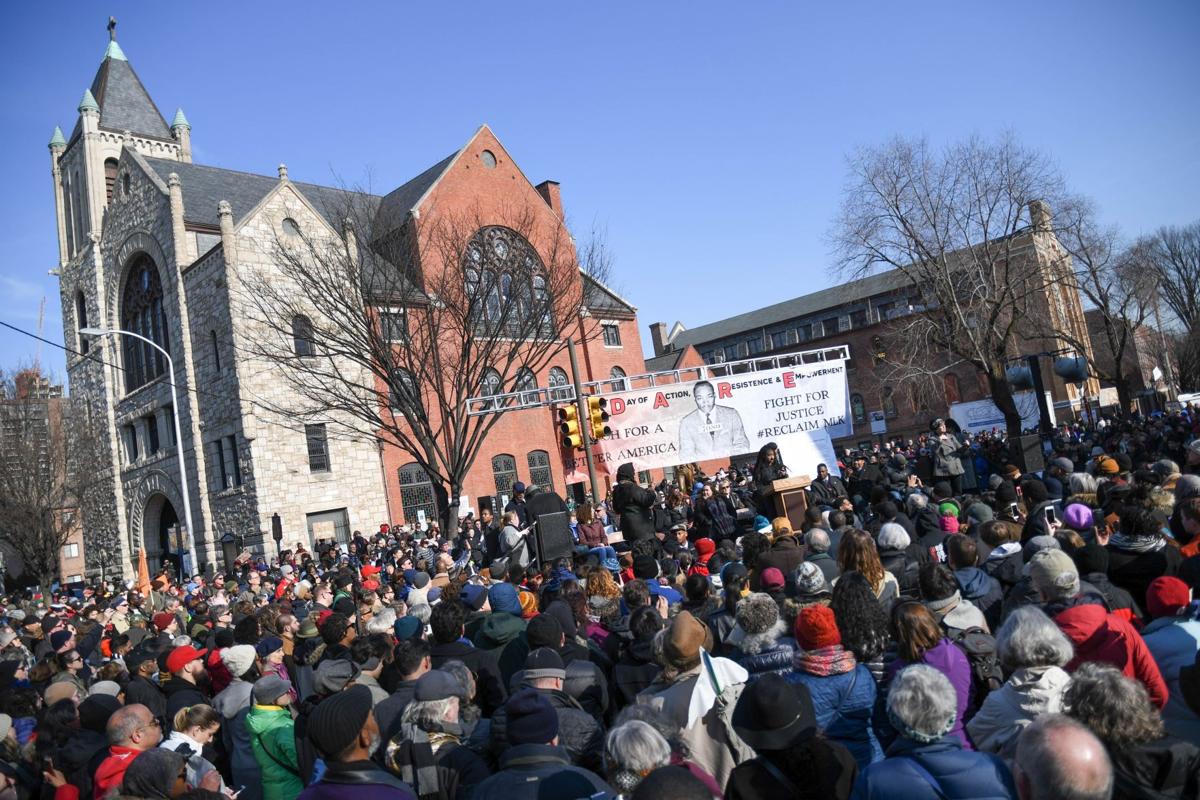 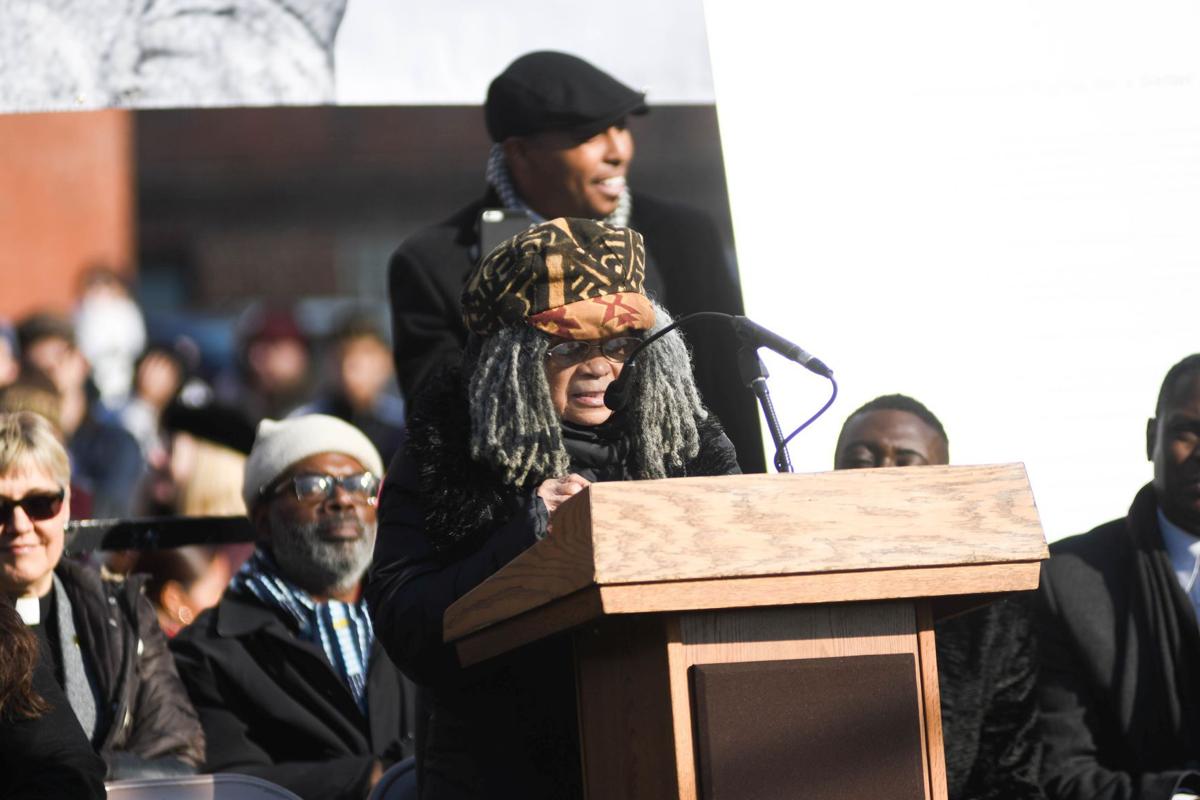 Members of Mother Bethel A.M.E. choir sing "We Shall Overcome" during the MLK Dare Coalition's "March for a Better America" on Monday, Jan. 16. TRIBUNE PHOTO BY MARISSA WEEKES MASON

Demonstrators participate in "A March for a Better Philadelphia," traveling from the President's House in Center City to Mother Bethel AME Church at 6th and Lombard, on Martin Luther King Day, Monday, Jan. 16. TRIBUNE PHOTO BY NATHANIEL LEE

Thousands of demonstrators in Philadelphia yesterday, Mon., Jan. 16, marked Martin Luther King Day by participating in “A March for a Better America.”

Under the banner of the “MLK Dare Coalition,” participants gathered in front of the President’s House at 6th and Market Streets and soon overfilled the streets, causing traffic delays as they marched to Mother Bethel AME Church at nearby 6th and Lombard, where a panel of speakers addressed their concerns about the current social and political environment in America.

Rev. Mark Kelly Tyler, senior pastor of Mother Bethel A.M.E., moved the crowd with the history of the African Methodist Church, formed by free Black men who fought against white oppression, including attempts to send all African people in America back to Africa after oppressors had used and exploited them and needed their labor no longer.

“There were no tangible signs that things would ever change but they gathered right here and said ‘we dream of a better world’,” said Tyler. “We come back to say to those in Washington, D.C. that in the city of brotherly love and sisterly affection, we have come to resist.”

Bishop Dwayne Royster, former executive director of the interfaith coalition P.O.W.E.R. (Philadelphians Organized to Witness Empower and Rebuild), now works for a coalition based in Washington but returned to add his continued support to the movement.

“I was given the task of addressing the perennial problem of America which at it the root of it all is racism,” said Royster. “We have to get honest with ourselves Over the course of last year we saw we saw race and racism used as a tool to motivate and move people to vote against their own self interests.”

Royster described the slogan of the Trump campaign, ‘Make America great again,’ as deceptive and tool to shake people up.

“I am here today to say that we cannot allow racism, prejudice and privilege in any form and that united we can make sure that everybody can thrive and not just a hand full of people,” said Royster. “It is time for us to break out of our silos, our racial silos, our religious silos, our issues silos, it is time that our progressive movement and moderates learn together so that everyone can have a chance at having a decent life here in this country.”

Councilwoman Helen Gym spoke on, what she titled, “What it’s like to be a woman in America today.”

“It is hard to imagine that this week we will see such a transition in our White House. Today we still have our first-lady Michelle Obama who talked about what it was like to live in a house built by slaves,” she said as the crowd erupted in applause at mention of Michelle Obama. “At the end of this week we will have a president that has consistently demeaned and objectified women calling us dogs, slobs and fat pigs and have boasted of sexually assaulting us.”

Gym said that the America which its citizens woke up to on Nov. 9th, after the presidential election which ushered Trump into office, was always there.

“That is what this fight is about. In Philadelphia and Pennsylvania don’t forget that we are seeing this same sick mentality at play whether its porn-gate emails spread among Supreme Court justices and prosecutors or a sexual predator protected at the Philadelphia Parking Authority,” she said.

According to information released by the group, the “March for a Better America” organizers also unveiled what it calls its ‘21st Century Declaration of Rights’ which calls on politicians, community leaders, and common citizens to support the basic human rights we cherish, such as affordable housing, health care, and quality public education for all.”