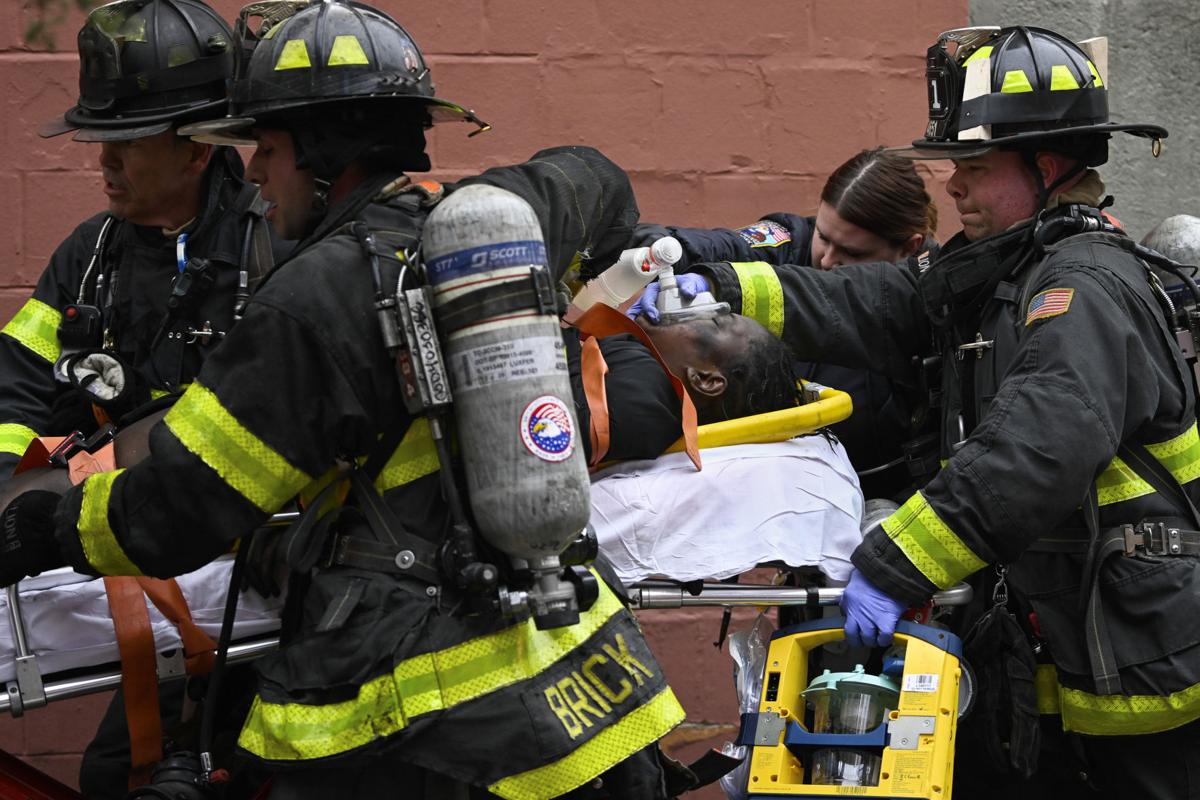 Emergency personnel use a manual resuscitator on a fire victim during a high rise fire on East 181 Street, Sunday, Jan. 9, 2022, in the Bronx borough of New York. (AP Photo/Lloyd Mitchell) 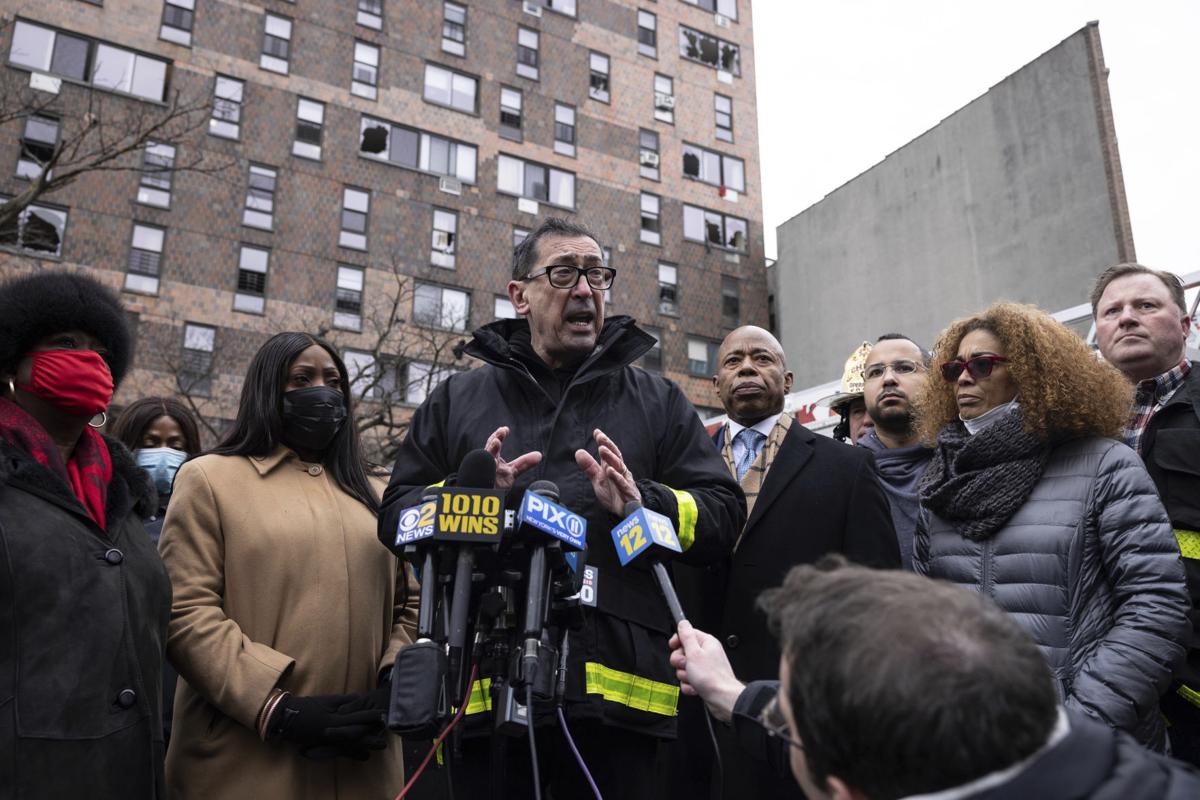 FDNY commissioner Daniel A. Nigro, middle, speaks during a a news conference outside an apartment building where a deadly fire occurred in the Bronx on Sunday, Jan. 9, 2022, in New York. (AP Photo/Yuki Iwamura) 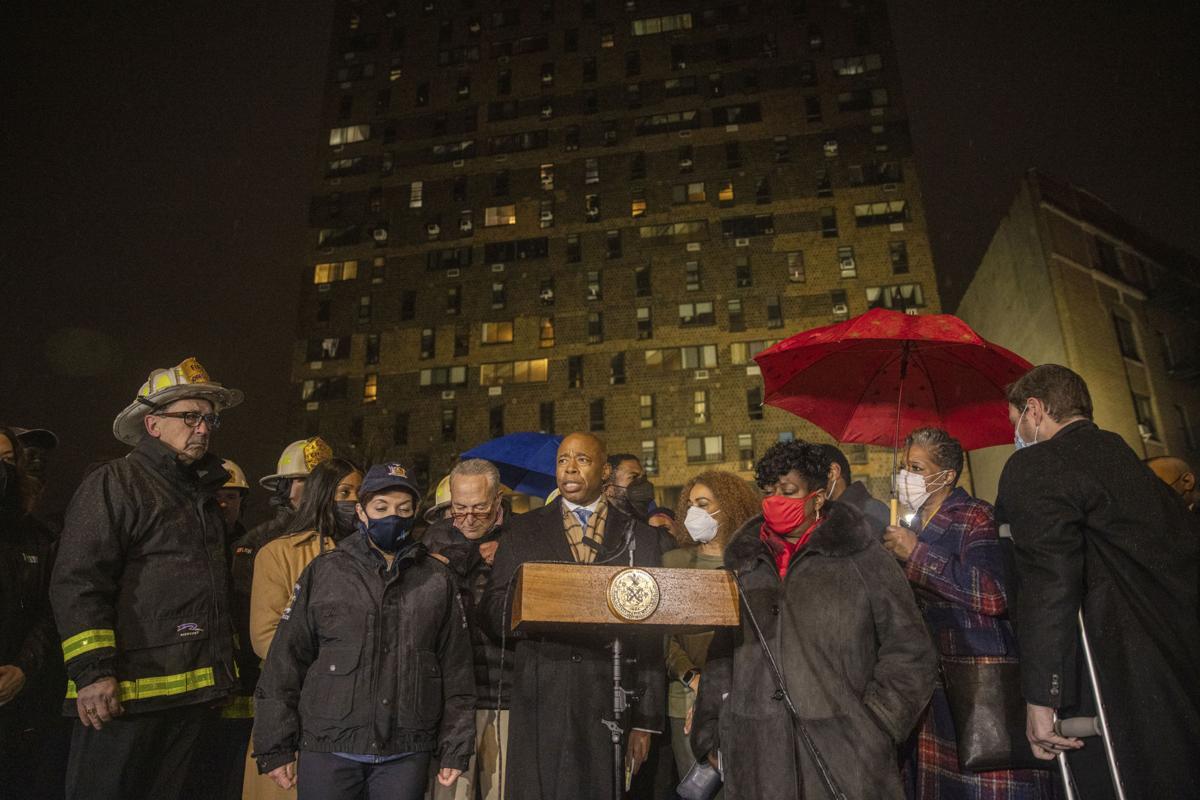 New York City Mayor Eric Adams speaks during a news conference outside an apartment building where a deadly fire occurred in the Bronx on Sunday, Jan. 9, 2022, in New York. (AP Photo/Jeenah Moon)

Emergency personnel use a manual resuscitator on a fire victim during a high rise fire on East 181 Street, Sunday, Jan. 9, 2022, in the Bronx borough of New York. (AP Photo/Lloyd Mitchell)

FDNY commissioner Daniel A. Nigro, middle, speaks during a a news conference outside an apartment building where a deadly fire occurred in the Bronx on Sunday, Jan. 9, 2022, in New York. (AP Photo/Yuki Iwamura)

New York City Mayor Eric Adams speaks during a news conference outside an apartment building where a deadly fire occurred in the Bronx on Sunday, Jan. 9, 2022, in New York. (AP Photo/Jeenah Moon)

NEW YORK — Doctors worked Monday to save the lives of multiple people gravely injured when smoke from a fire knocked them out or trapped them in their apartments in a New York City high-rise building. Nineteen people, including nine children, died in the blaze.

Dozens of people were hospitalized, and Mayor Eric Adams said Monday morning that several people were in critical condition after Sunday’s fire in the Bronx, already the city’s deadliest in three decades. A somber mayor told CNN that the death toll could rise.

“We pray to God that they’ll be able to pull through," he said.

Investigators determined that a malfunctioning electric space heater, plugged in to give extra heat on a cold morning, started the fire in the 19-story building.

The flames damaged only a small part of the building, but smoke escaped through the apartment’s open door and turned stairwells — the only method of flight in a building too tall for fire escapes — into dark, ash-choked horrors.

Some people could not escape because of the volume of smoke, said Fire Commissioner Daniel Nigro. Others became incapacitated as they tried to get out. Firefighters found victims on every floor, many in cardiac and respiratory arrest, said Nigro.

Limp children were seen being given oxygen after they were carried out. Some who fled had faces covered in soot.

Firefighters continued making rescues even after their air supplies ran out, Adams said.

“Their oxygen tanks were empty and they still pushed through the smoke,” Adams said.

Fire Commissioner Daniel Nigro said an investigation was underway to determine how the fire spread and whether anything could have been done to prevent or contain the blaze.

Adams said it appears the smoke spread due to a door that was supposed to automatically close being open.

"There may have been a maintenance issue with this door. And that is going to be part of the .. ongoing investigation,” Adams said on Good Morning America.

Large, new apartment buildings in the city are required to have sprinkler systems and interior doors that swing shut automatically to contain smoke and deprive fires of oxygen, but those rules don’t apply to thousands of the city’s older buildings.

The building is equipped with smoke alarms, but several residents said they initially ignored them because alarms were so common in the 120-unit building.

Building resident Sandra Clayton grabbed her dog Mocha and ran for her life when she saw the hallway fill with smoke and heard people screaming, “Get out! Get out!”

Clayton, 61, said she groped her way down a darkened stairway, clutching Mocha. The smoke was so black she couldn’t see, but she could hear neighbors wailing and crying nearby.

“I just ran down the steps as much as I could but people was falling all over me, screaming,” Clayton recounted from a hospital where she was treated for smoke inhalation.

In the commotion, her dog slipped from her grasp. Mocha was later found dead in the stairwell.

Hassane Badr told The New York Times that two of his siblings, both children, were killed and that a 25-year-old cousin remained unaccounted for. Badr, 28, waited at Jacobi Medical Center for news about his 12-year-old brother, who was suffering from serious smoke inhalation. A 5-year-old sister was at another hospital.

“I’m thinking like I’m dreaming, this is not true. You hear people crying, my goodness,” Badr told the newspaper. “To be honest, I’m not believing it right now.”

Badr’s family, 11 people from Mali, lived in a three-bedroom apartment on the third floor.

Mahamadou Toure struggled to put his grief into words outside the hospital emergency room where his 5-year-old daughter and the girl’s teenage brother died, according to the Daily News.

“Right now my heart is very …,” Toure trailed off while speaking to the New York Daily News. “It’s OK. I give it to God.”

Luis Rosa said he initially thought it was a false alarm. By the time he opened the door of his 13th-floor apartment, the smoke was so thick he couldn’t see down the hallway: “So I said, OK, we can’t run down the stairs because if we run down the stairs, we’re going to end up suffocating.”

The fire was New York City's deadliest since 1990, when 87 people died in an arson at the Happy Land social club, also in the Bronx. The borough was also home to a deadly apartment building fire in 2017 that killed 13 people and a 2007 fire, also started by a space heater, that killed nine.