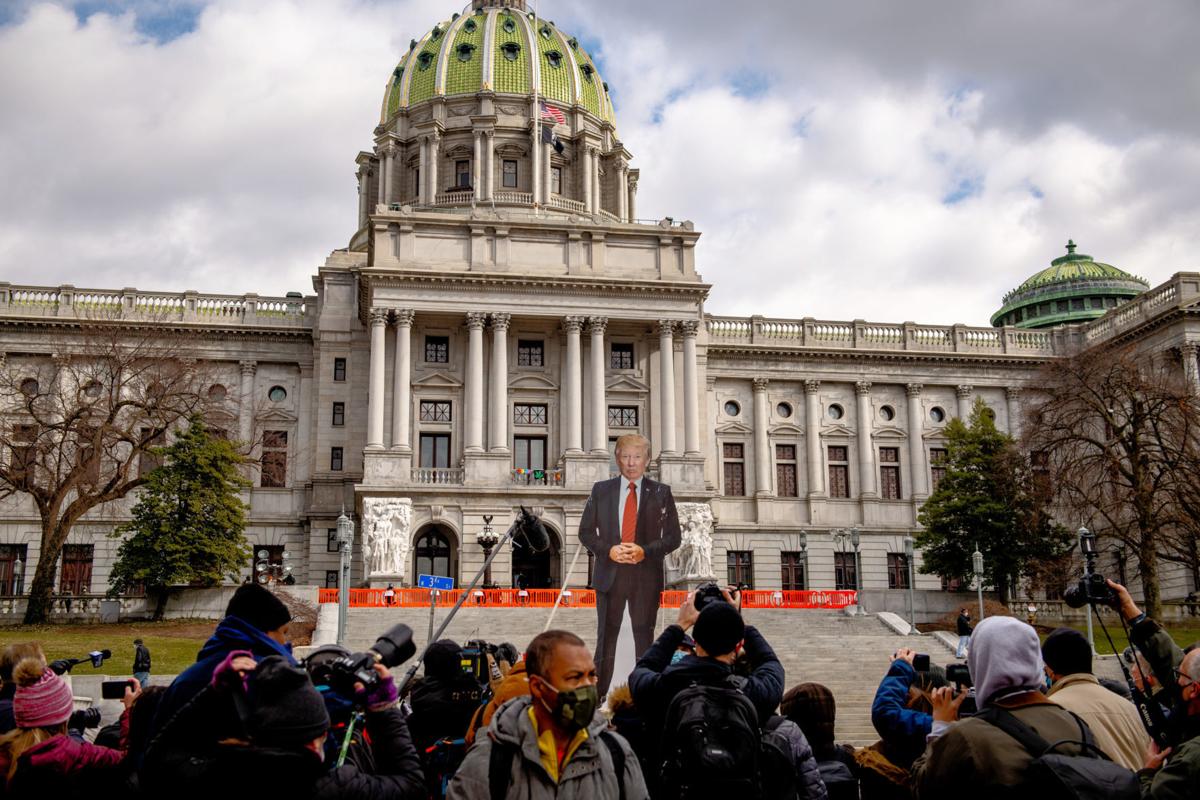 A cutout of then-President Donald Trump is displayed by a protester outside the Capitol in Harrisburg, Pa., Jan. 17. 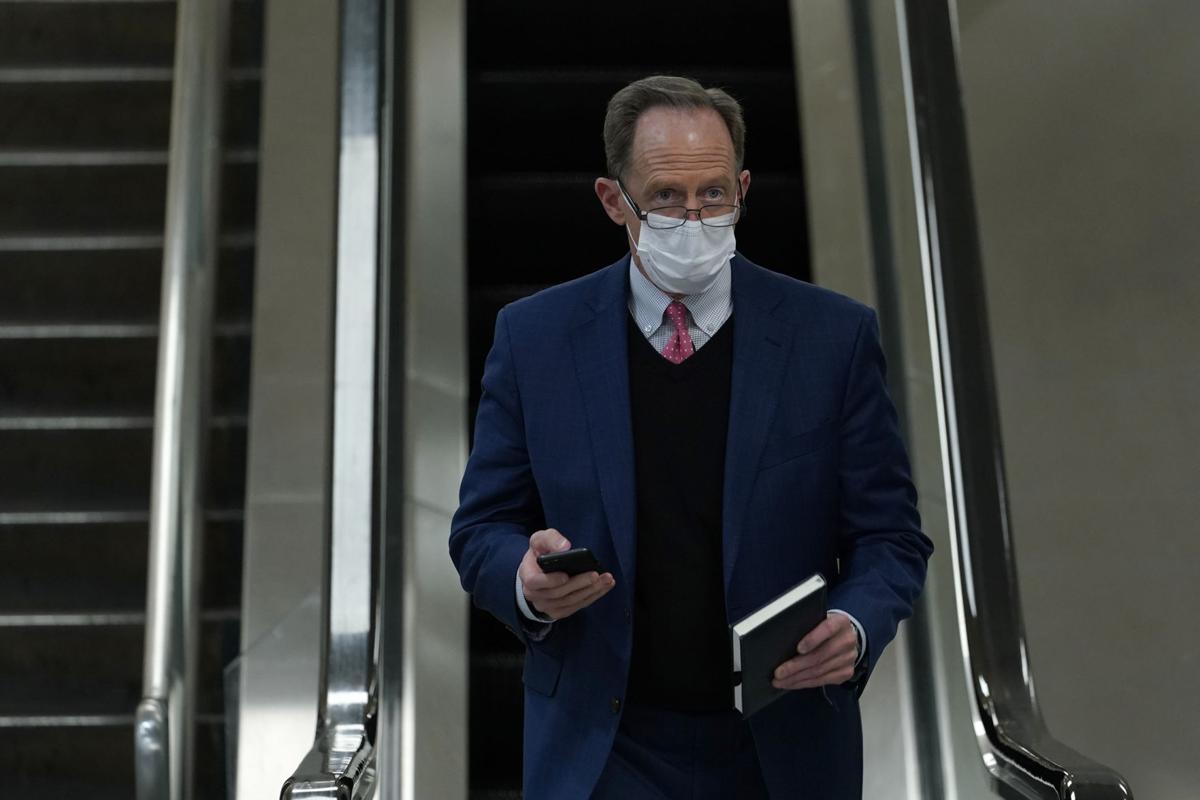 A cutout of then-President Donald Trump is displayed by a protester outside the Capitol in Harrisburg, Pa., Jan. 17.

Attempting to regroup in the wake of Donald Trump’s 2020 presidential election loss, Pennsylvania Republicans have become locked in a cycle of infighting over the party’s direction.

One perspective appears, so far, to be winning out.

Weidman, who remains involved in the party behind the scenes, is confident that he speaks for most of the Republicans in Pennsylvania’s “T” — the mostly rural swath along the commonwealth’s northern tier and center that the Republican Party dominates.

There are still holdouts, “never Trumpers,” as he calls them, who always disliked the former president. But as far as he can see in Franklin County, most of the naysayers got in line with Trump early in his tenure and never looked back.

The state Republican Party has been on that page as well.

Ahead of several key judicial races in the November election, and what will be hotly watched 2022 races for open gubernatorial and U.S. Senate seats, chairman Lawrence Tabas has repeatedly made clear the party’s allegiance to Trump.

And for the Trump-critical Republicans still holding out hope the party will move past the former president, the atmosphere behind the scenes is feeling increasingly poisonous.

“We’ve got a major Stalin-like purge going on,” Cumberland County GOP commissioner Gary Eichelberger said of his local Republican committee. “This is the Republican version of cancel culture.”

Pat Toomey, enemy of the GOP

When retiring U.S. Sen. Pat Toomey ran for Senate in 2010 and 2016, Weidman was a big supporter. In his opinion, Toomey never would have won his combative 2016 race without Trump at the top of the ticket, turning out new conservative voters.

So when Toomey gave a scathing critique of Trump in the hours after the insurrection on Jan 6., then voted to convict him in the subsequent impeachment trial, Weidman said many Republicans took it as a slap in the face.

“His disloyalty, if you will, to Trump, and his actions with the impeachment and other things, they really rubbed a lot of the people the wrong way,” he said. “They really feel it’s a personal animosity he bears to the former president.”

After Toomey’s initial vote to allow the trial to proceed, county Republican parties began circulating petitions to censure him, and the effort picked up steam after he became one of seven Republicans to ultimately vote in favor of the impeachment — a historic number of senators from a president’s own party.

In a statement, state GOP Chair Tabas said he shares “the disappointment of many of our grassroots leaders over Senator Toomey’s vote.” Tabas also emailed county chairs to tell them the party is planning a meeting to discuss a formal censure.

Toomey has repeatedly defended his vote to convict.

In an op-ed published Friday, he said that he voted for Trump and believed the former president had been treated hypocritically by Democrats, but that Trump clearly “capitalized on his supporters’ anger, which he had fomented, in a last-ditch effort to retain power,” and that as a direct result of Trump’s actions, “for the first time in American history, the transfer of presidential power was not peaceful.”

Explanations notwithstanding, several county Republican parties have now formally voted to censure Toomey, and many others have similar efforts in the works.

Franklin is one — Weidman expects the GOP there will vote to censure Toomey in the coming weeks.

Another censure petition is circulating in Cumberland County. Unlike Franklin, Cumberland — long a conservative stronghold outside Harrisburg — is getting gradually bluer, thanks to a booming warehousing and trucking industry and spreading suburbanization in once-rural areas.

Eichelberger, the Republican commissioner from Cumberland who is critical of Trump, has been in his position for 17 years. He often butts heads with his county Republican committee, but says this year has been especially bad.

There were disagreements about responding to the pandemic, with commissioners publicly condemning local Republican lawmakers who wanted to reject the governor’s shutdown orders. Then, Eichelberger said, he upset fellow Republicans by saying the 2020 election hadn’t been riddled with fraud. After Trump lost, he added, things got even tenser.

“The party leaders at the county level are embarrassed that they couldn’t deliver numbers for the state committee,” he said. “So they’re all flailing around … everybody who’s in disagreement gets labeled, and they want to run them out of the party.”

Eichelberger considers himself a fiscal conservative, and says he has always respected Toomey. The quick circling of the wagons around Trump and against the senator didn’t surprise him — but it worried him.

In the wake of the insurrection, Eichelberger said Cumberland’s election director told him the office was being “bombarded” with calls from Republicans looking to change their party registration.

“We always see some of that after an election, so we have a good sense of what those numbers are,” he said. “This was several times above that.”

All told, about 10,000 Pennsylvanians left the GOP in the days immediately following the Capitol riots. It’s a trend that repeated itself around the country.

Pennsylvania’s GOP, Eichelberger noted, already trails Democrats in registration statewide. A big part of the reason Trump was successful in 2016 was that he was able to turn out enough unexpected voters — disaffected Democrats, people who didn’t usually turn up for elections — to offset Democrats’ dominance in big cities and the areas around them.

But in Cumberland — and lots of similar suburbs outside smaller cities — he feels the ground shifting beneath him, and not in a way that benefits his party.

“Politics is about numbers. You have to have numbers to win elections,” he said. “If we just keep narrowing this, the GOP is not going to win big races anymore. They’re not going to be able to put together the coalition of, not only Republicans, but independents and other categories of people.”

Eichelberger’s fears will either be dispelled or confirmed in the coming months, as county and state parties discuss who they’ll back for governor and U.S. Senate in 2022.

In these very early stages of the race, different factions of the party are internally gravitating toward two separate visions: Trump’s populism, or a Toomey-style conservatism.

Ryan Costello is preparing to test out those roiling political waters.

The 44-year-old Chester County Republican served in congress from 2015 to 2019 as a moderate. Among his current priorities, he lists getting kids back into schools — criticizing teachers unions that are concerned about how to safely return to classrooms. He favors a stimulus bill without contentious add-ons like a minimum wage increase, and supports an energy approach that will eventually lead toward renewables, and away from fossil fuels.

Costello dropped out of his reelection campaign abruptly in 2018, after the Pennsylvania Supreme Court significantly redrew his district to correct what it ruled an unconstitutional Republican gerrymander.

Now he says he is “actively looking” to enter the U.S. Senate race, and planning to soon form an exploratory committee.

He admits that he’s not sure what he can expect from Pennsylvania Republicans right now — but he has a few theories. Chiefly, that county GOP committees, which saw many of their current members join because of their affinity for Trump, have a closer allegiance to the former president than actual voters do.

“There’s a part of the Republican Party that is very fixated on and invested in former President Trump as the figurehead of the party, and as kind of the voice of the party,” he said. But he thinks there’s also a quieter group that is “ready to turn the page.”

He’s confident in his approach, which he thinks will entice independents who left the GOP recent years. But he acknowledges, there’s still no clear path to a post-Trump party.

“Right now, Republicans in a lot of ways are more focused on fighting each other,” he said.