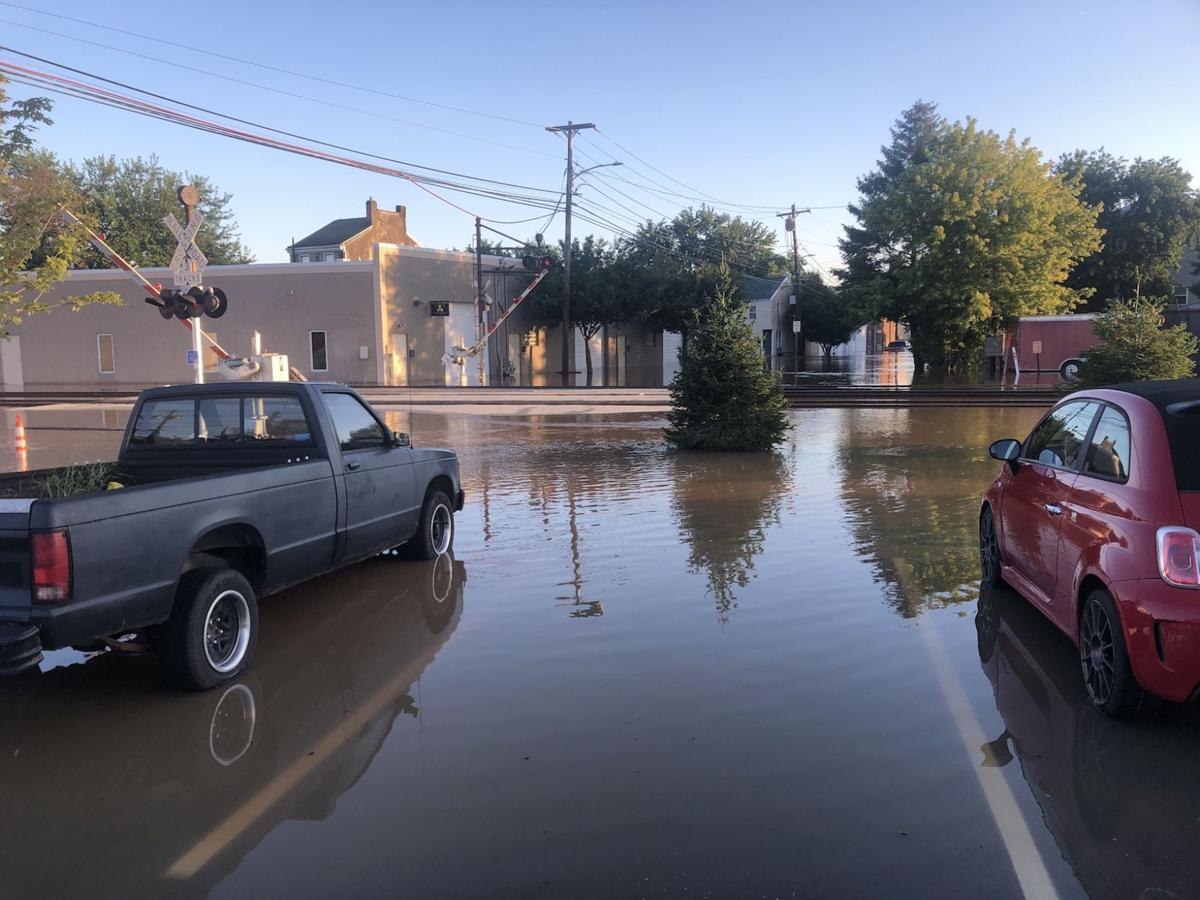 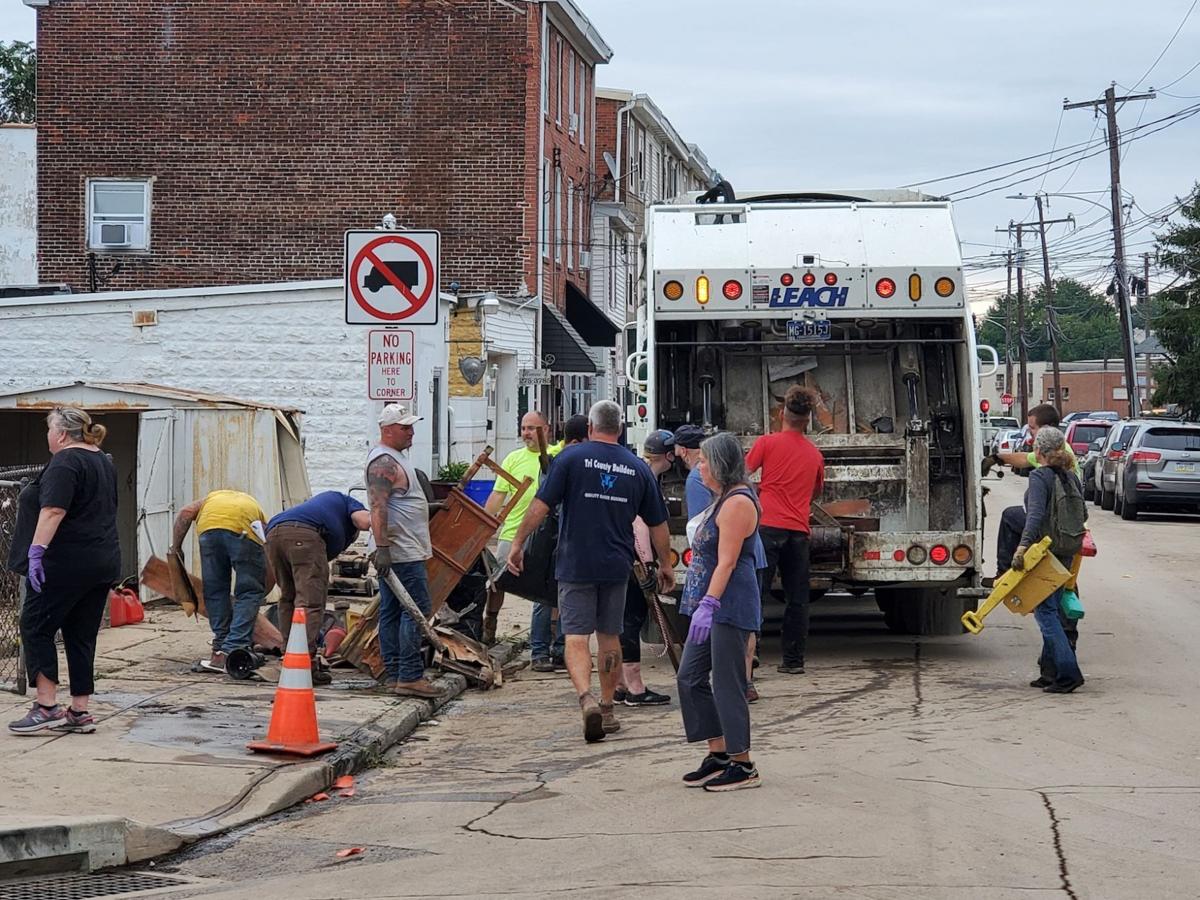 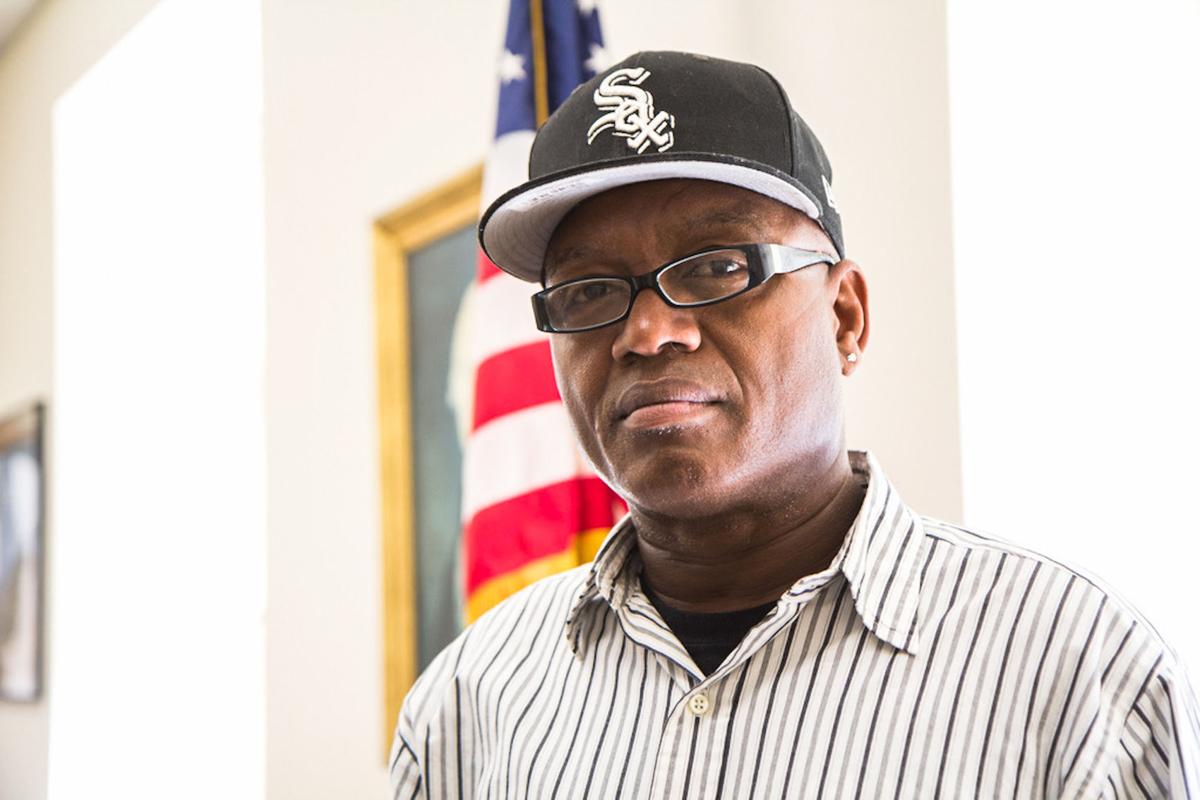 Elliott Palmer, a resident of Bridgeport, Pa., was displaced by flooding caused by Hurricane Ida and lost everything. (Kimberly Paynter/WHYY) 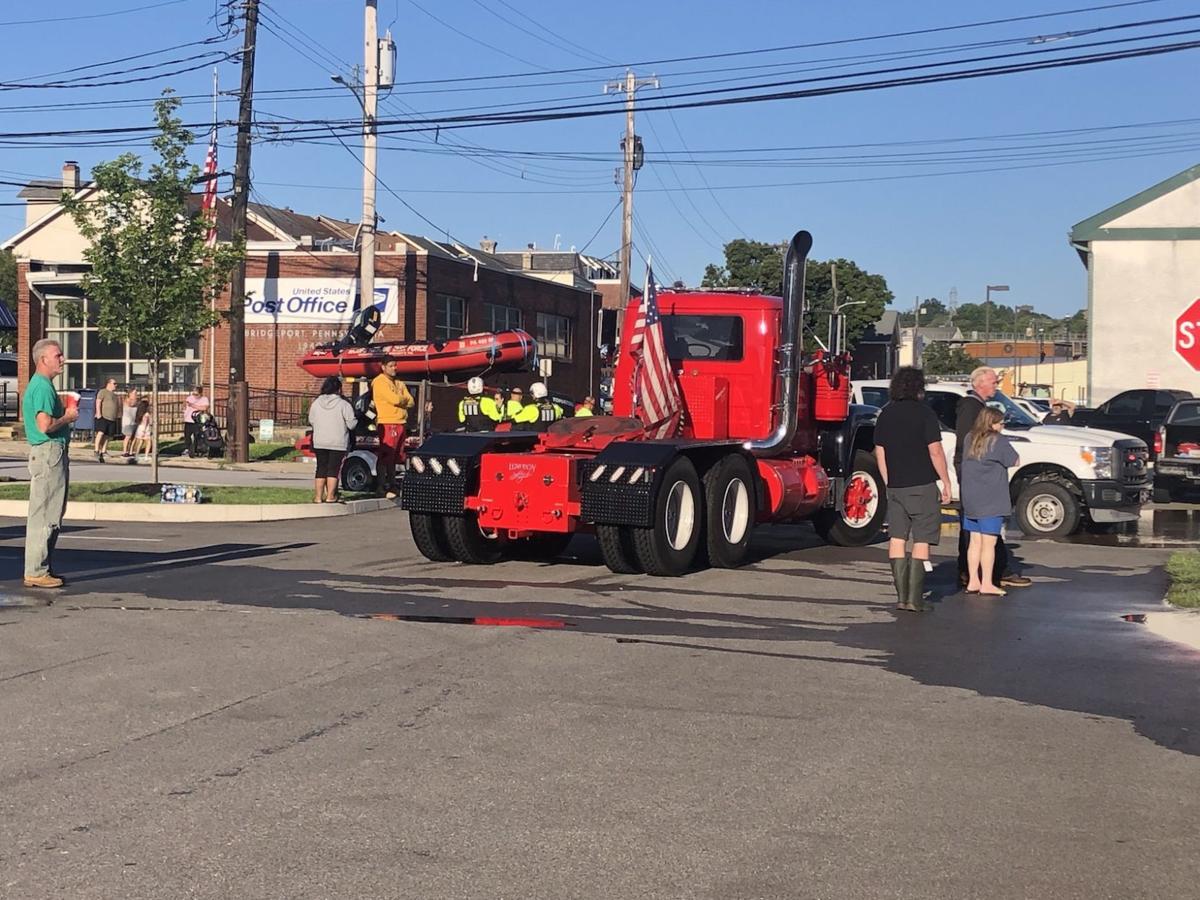 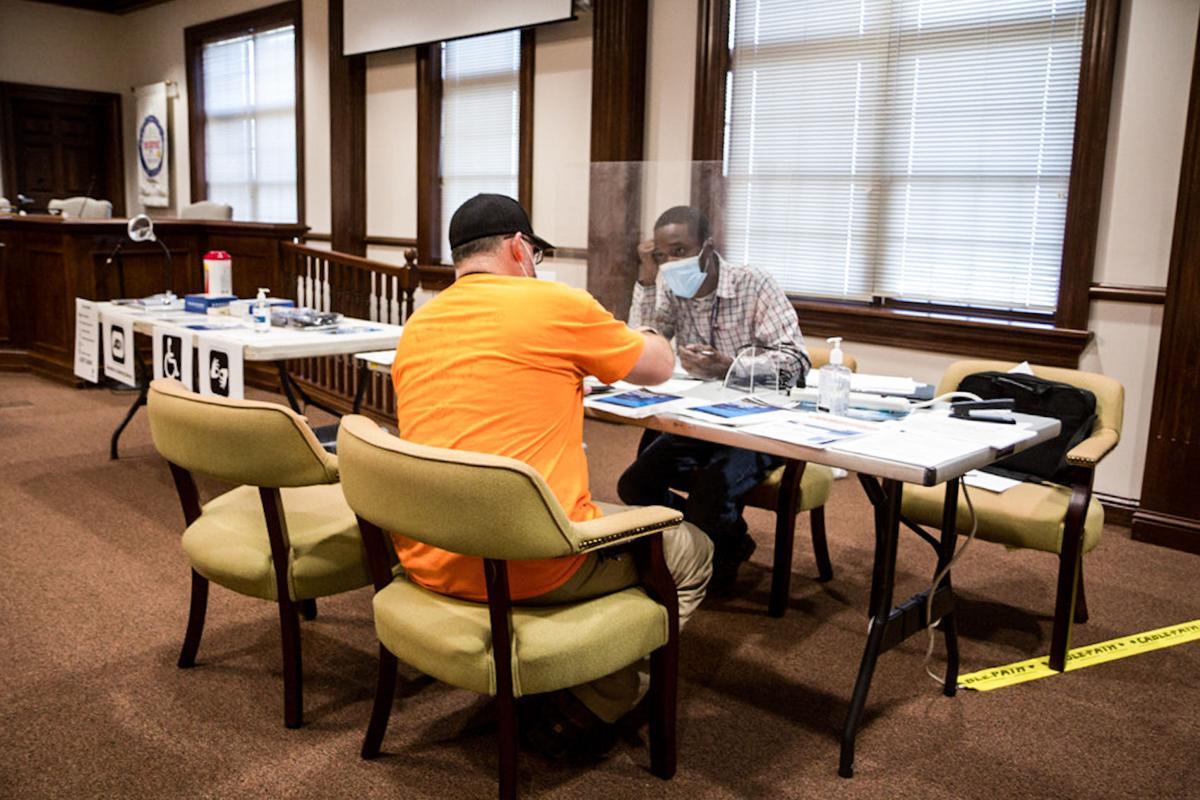 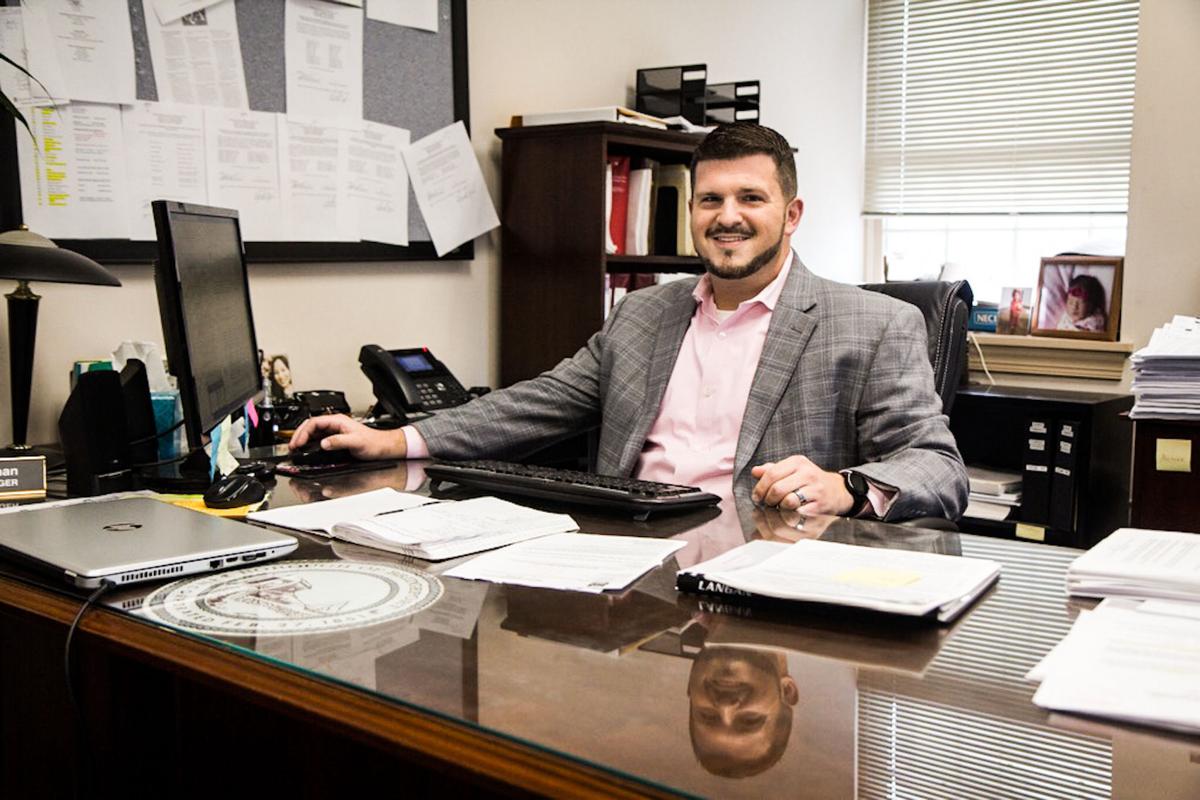 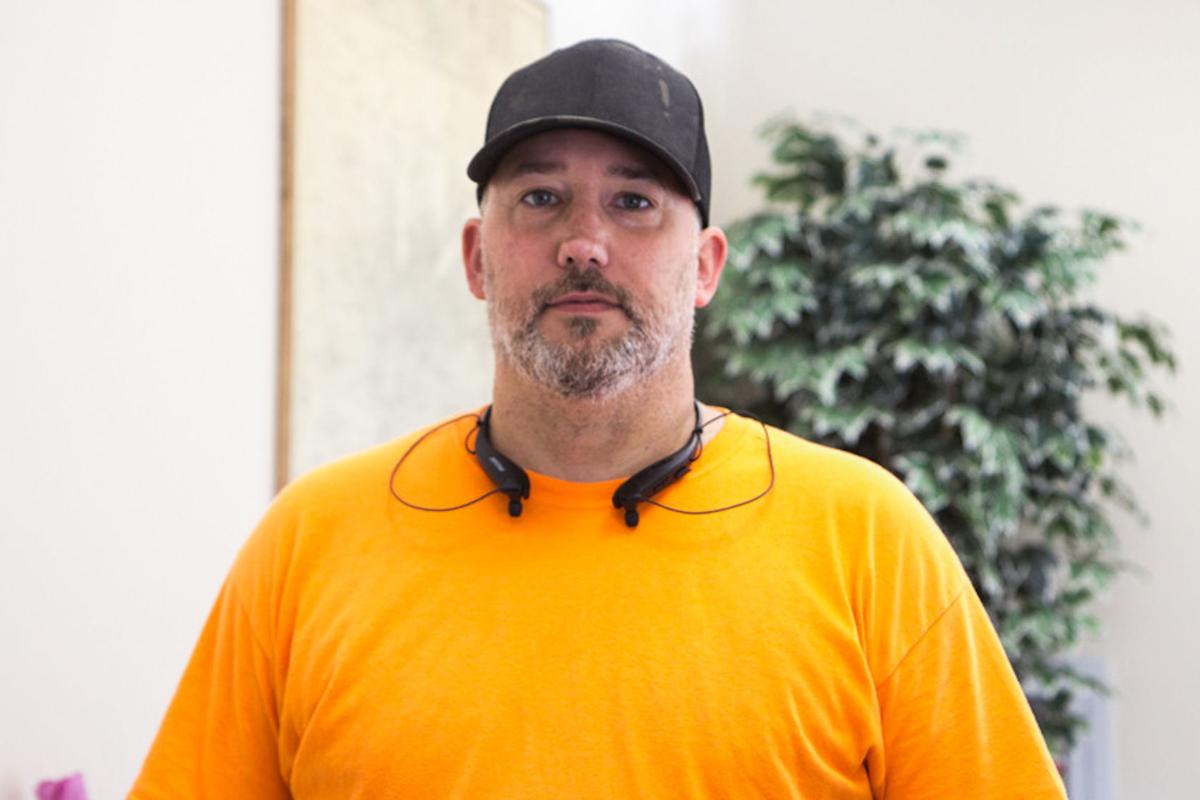 Jeffrey Spiron, homeowner, was displaced by flooding in Bridgeport, Pa., and is rebuilding his home. (Kimberly Paynter/WHYY) 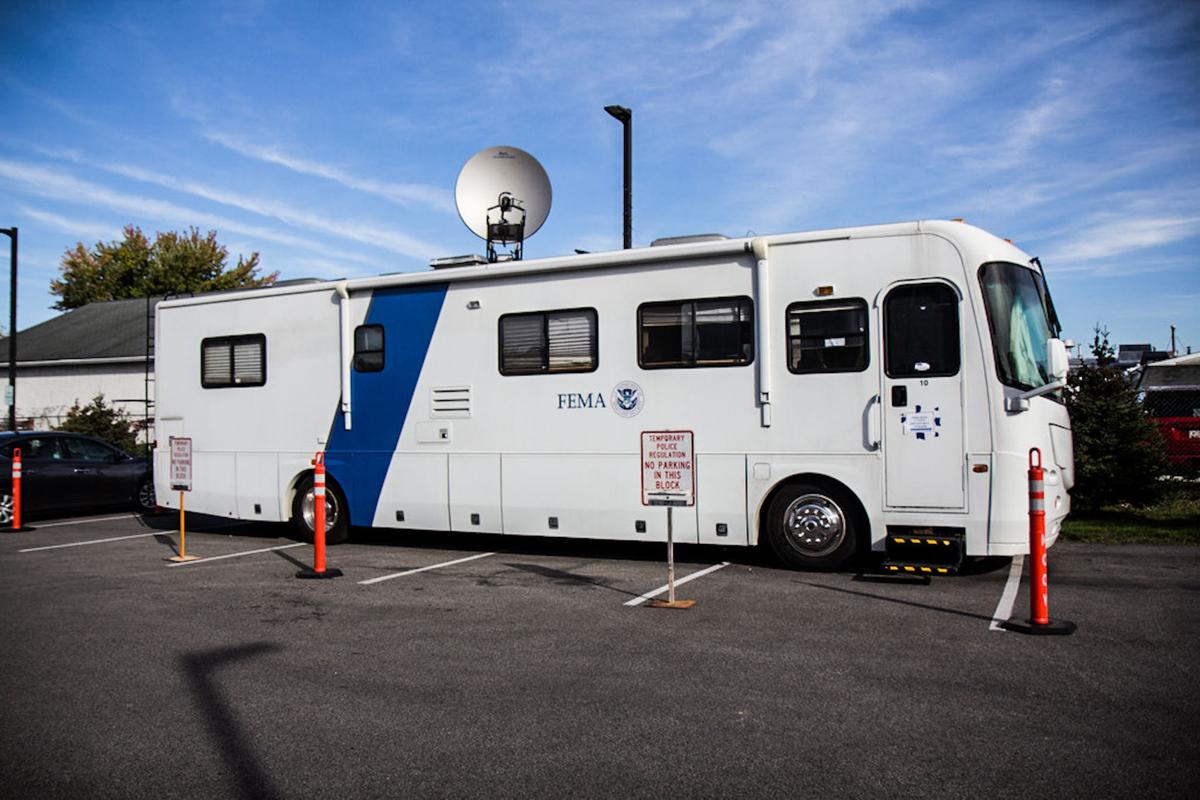 A FEMA trailer parked outside the municipal building in Bridgeport, Pa. (Kimberly Paynter/WHYY) 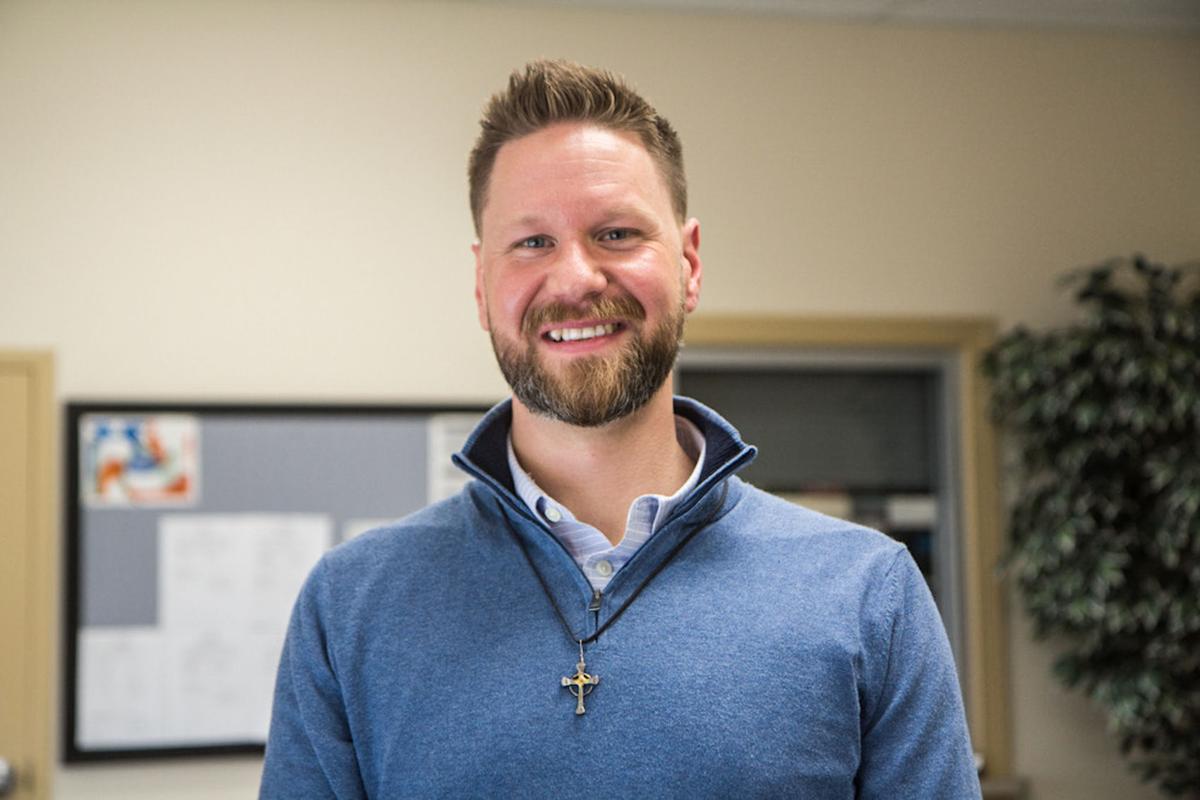 Reverend Aaron Craig is the pastor of the First Presbyterian Church of Bridgeport, Pa. (Kimberly Paynter/WHYY) 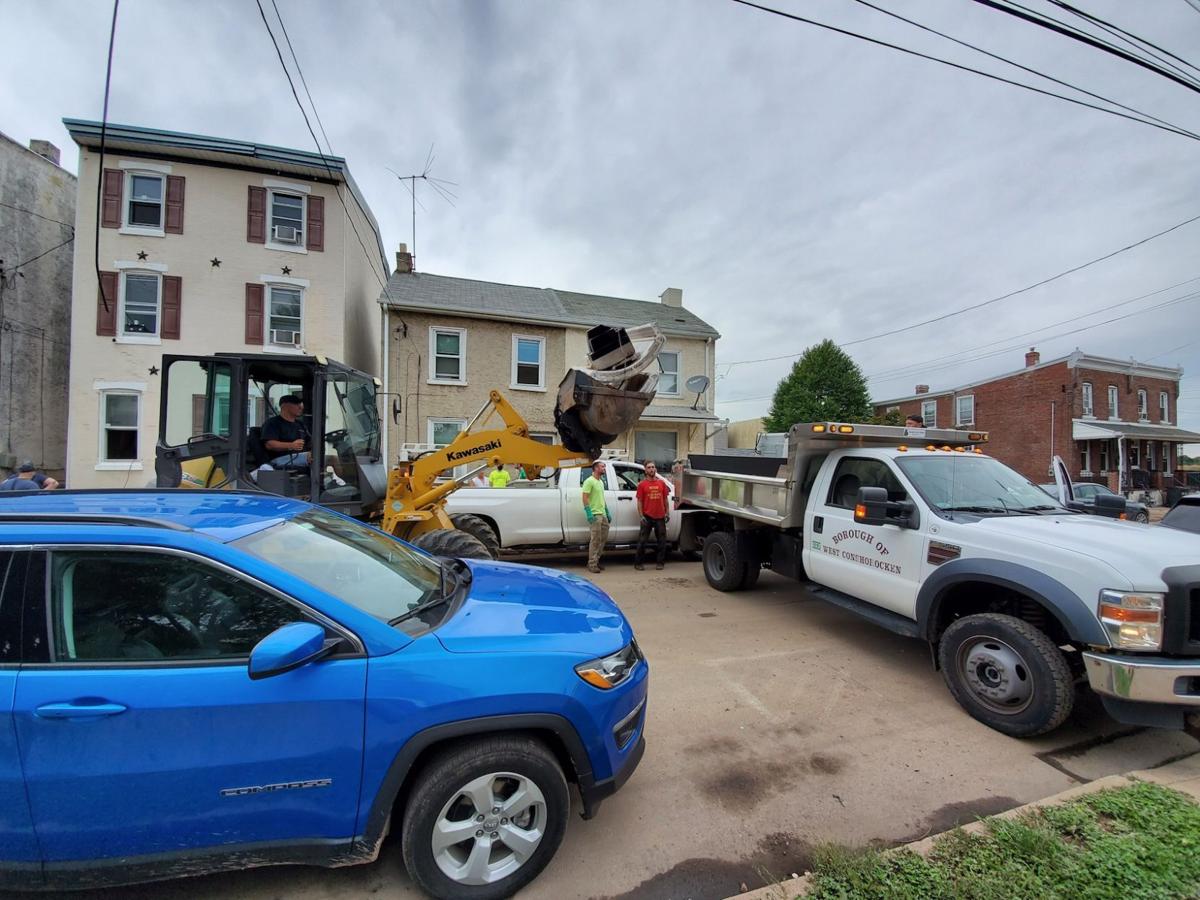 Elliott Palmer, a resident of Bridgeport, Pa., was displaced by flooding caused by Hurricane Ida and lost everything. (Kimberly Paynter/WHYY)

Jeffrey Spiron, homeowner, was displaced by flooding in Bridgeport, Pa., and is rebuilding his home. (Kimberly Paynter/WHYY)

A FEMA trailer parked outside the municipal building in Bridgeport, Pa. (Kimberly Paynter/WHYY)

Reverend Aaron Craig is the pastor of the First Presbyterian Church of Bridgeport, Pa. (Kimberly Paynter/WHYY)

In early September, the remnants of Hurricane Ida brought multiple tornadoes and heavy rainfall that caused historic flooding along the Schuylkill River. It crested at 16.35 feet, just shy of the 150-year-old record of 17 feet. Floodwaters destroyed hundreds of homes and businesses across Southeastern Pennsylvania, causing what state officials calculated at more than $100 million in public infrastructure damage.

On the morning of the storm, Sept. 1, more than 6,500 emergency calls came in to 911 in Montgomery County. Board of Commissioners Chair Val Arkoosh said the county also recorded 452 water rescue events, over 300 more than the county’s previous high during Isaias last year.

Nearly three months have gone by now, and 380 people in the county are still living in hotel rooms, unable to return to their homes. About one-quarter of them are from Bridgeport, where 300 people were evacuated from their homes and 500 were temporarily displaced.

Elliott Palmer is one of them. The floodwaters destroyed his second-floor apartment. He didn’t have rental or flood insurance.

“I lost everything. I lost the bed, all of my clothes, my suit and tie, I lost TVs, I lost furniture … a sectional. I’ve worked hard to get everything I got, from the kitchen … all the way to the bedroom, all the way, you know?” Palmer said. “I lost completely everything.”

Palmer, who said he is a recovering IV drug user, had moved to Bridgeport in February, renting his own apartment for the first time. He had worked his way up in about two years from a cashier job at McDonald’s, to a manager’s position in customer service for US Foods. But when the building where he worked in Perkiomen also was destroyed by flooding, Palmer lost his job too. Now, trying to rebuild his life, he works as a dishwasher at a nearby cafe and is waiting to move into a new apartment, paid for by the Federal Emergency Management Agency funds he just received last week.

“You know it hurts … I can’t stop these feelings from coming. But I ain’t got to act on what I feel. Do I feel like using sometime to forget this stuff?” Palmer said. “Hell, yeah. But I don’t maximize the thought.”

Homeowner Jeffrey Spiron said his house was destroyed by the hurricane, but he had insurance coverage. He, his wife, and two kids have been staying at a hotel paid for by the county.

“So it’s essentially a one-bedroom apartment with the couch that pulls out into a bed … So it’s not bad. It just feels like an extended stay somewhere. I mean, I don’t think it’s that bad,” Spiron said. “My wife’s losing her mind, but … we’ll be back before we know it.”

They await money from FEMA for the repairs on their house. Until then, Spiron and his family spend their time at the hotel or with his mother-in-law, who lives nearby.

Both Spiron and Palmer said their situations would be much worse if not for fundraising and other help from fellow residents of Bridgeport, a town of about 4,500 that sits across the river from Norristown.

First Presbyterian Church was one of the first groups to organize support. The morning of the flood, Rev. Aaron Craig said he gathered church leaders and immediately went to work on bringing in much needed supplies like food, clothing, toiletries, and relief funds.

“What we ended up doing was actually just getting in our cars, a lot of us, and going down to the flood area and, you know, just give people food and water and whatever they needed, offer prayer, offer crisis counseling. Just kind of be there for the people,” Craig said. “People were very appreciative, and it was just amazing. It was an amazing thing to see everybody come together and work together. The outpouring of love was incredible.”

First Presbyterian now hopes to work with the Upper Merion Area School District, whose schools Bridgeport children attend, to find the best way to use the remaining relief funds for the still-displaced families.

“Now we have the donation money that people generously gave us … We just need to find the families, figure out what they need, and figure out how we can help monetarily at this point,” Craig said.

Before Montgomery County stepped in to house those affected by the storm, the bill was covered by the Upper Merion Area Community Cupboard, or UMACC, which raised funds through donations.

“We paid for the first three weeks of hotels … And then Montgomery County started taking over that payment, thankfully,” said UMACC board member Alice Hope. “We spent about $150,000 of privately raised money to house these folks. There are so many of these people that really have nowhere to go still. So that’s sort of the issue we’re facing right now.”

“Our partnerships with groups like [First Presbyterian Church and UMACC] made it so that we could provide for people,” Bereda said. “So upwards of $250,000 to date were raised by private citizens to support the residents of Bridgeport, and at one point it was at least $42,000 a week. And that’s before the county was able to step back in and pick up the tab. So we were sheltering and feeding at least 350 people.”

Hope said those she helped find temporary housing tell her they now face a new challenge: finding affordable permanent housing in Bridgeport to return to, since most of it lay along the now-flood-damaged Schuylkill riverside.

“We don’t have affordable housing in Bridgeport or Upper Merion. And so that is our current situation … some people are relocating to Norristown or Pottstown or Philadelphia, but really people want to keep their kids in our schools in Upper Merion because… it’s their home, so that it’s been pretty difficult.”

Earlier this year, Montgomery County released a housing study that found that median gross rent there had doubled the pace of inflation since 2010. The price of a two-bedroom rental in Bridgeport increased by 75% in the past six years, and the median housing price increased 104% in the past 15 years.

The county has indicated it has no plans to remove anyone from temporary housing without a permanent housing plan in place.

In an email, Montco officials wrote that the county is “working with four local case-management agencies to provide extensive, in-person assistance with housing location in order to exit the hotels to permanent housing.”

“Some households are reporting they will not be able to return for another six to 12 months,” the county wrote. “We have concerns that some households will struggle to find new affordable housing, particularly the 33 households from Riverside Apartments we are still hoteling as of today.”

The county said it is “collaborating closely” with its Office of Public Safety, the Pennsylvania Emergency Management Agency, and FEMA to coordinate benefits and opportunities to “regain housing as quickly as possible.”

Luckily for Elliott Palmer, the county recently found housing he can afford on his minimum-wage salary. But he’s aware that he still has work to do to get his life back to where it was before the storm. He tries not to think about the damage too much.

“I don’t have the answer to it. I just don’t,” he said. “For me, where I come from in my life, you can’t think so hard about the things that you’re powerless over.”

Where Bridgeport goes from here

After the storm, 260 metric tons of debris were removed. Bridgeport contracted a waste removal company for round-the-clock support.

Borough Manager Keith Truman said the cleanup cost close to $200,000, an expense that Bridgeport — whose yearly operating budget is about $5 million — had not anticipated.

“We have very finite resources. None of this was budgeted. So to that end, well over $100,000 in debris removal expenditures, about $15,000 to jet our sewer mains,” Truman said.

Bridgeport was approved to receive FEMA assistance after a federal disaster declaration was issued a week after the storm. Gov. Tom Wolf toured the affected parts of town for an on-the-ground damage assessment. He requested, and received, the disaster declaration from President Joe Biden the next day.

The borough has yet to be reimbursed by FEMA for the debris removal costs, but officials are hopeful it could come soon. Local government now largely functions as a conduit between FEMA, Pennsylvania’s emergency management agency, and the county.

And officials are getting ready for the next big storm.

To better prepare residents for future floods of this magnitude, Bridgeport plans to implement a “reverse-911” system, in the form of direct text alerts about potential emergencies. Plus, both its police and fire departments will now require water rescue training and certification, to increase the number of first responders ready to assist when the need arises.

With Ida, the National Guard performed water rescues for about 75 people.