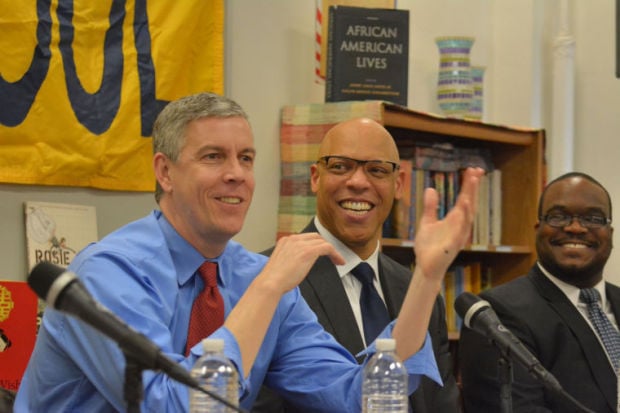 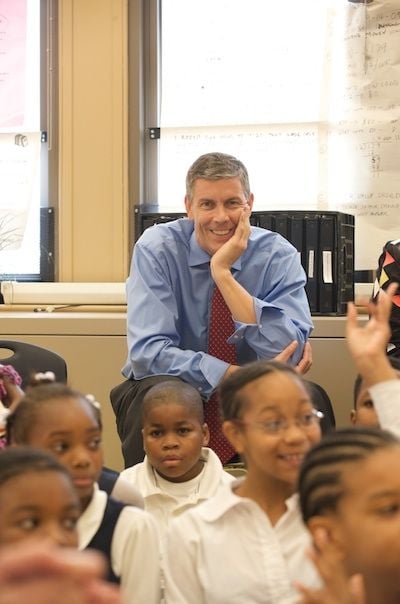 In an archived photo, U.S. Education Secretary Arne Duncan smiles in a classroom filled with youngsters. At a panel discussion at E.M. Stanton School in Philadelphia, he told an audience he took the job to help children around the country after serving as superintendent of Chicago public schools.

— Photo courtesy of the U.S. Department of Education.

In an archived photo, U.S. Education Secretary Arne Duncan smiles in a classroom filled with youngsters. At a panel discussion at E.M. Stanton School in Philadelphia, he told an audience he took the job to help children around the country after serving as superintendent of Chicago public schools.

— Photo courtesy of the U.S. Department of Education.

Rivera commended the staff at E.M. Stanton School at 17th and Christian streets for creating a model learning environment and also acknowledged Hunting growing up in Philadelphia.

There was a candid discussion about how funding disparities have led to stark differences between public schools in wealthier communities and public school districts with large numbers of low-income households.

“It’s a shame that kids have to ask for things that should be a right,” Rivera said.

Rivera commended Stanton school officials for creating a supportive learning environment, saying it was easily evident as he observed learning in progress in classrooms.

“The cultural arts program promotes various forms of the arts, from the visual arts, drama, music, and dance, emphasizing the importance of the arts in their lives, the world and across the country,” said Vicki Ellis, a member of the Stanton Community Partners organization.

Joan Williams, a fourth-grade teacher at Stanton, said the school has cultivated strong community partnerships as a result of relationships developed by the school staff who often stay well beyond the dismissal bell.

“Because of that extra effort, we’ve been able to get these partnerships,” she said.

A fellow teacher Anne Olvera, who leads violin instruction classes, recalled a student team placing first in a local civic education competition recently. She attributed the team’s first place ranking “indicative of the work that goes on here. Our kids are motivated to be here. Nobody comes late on Thursday because you know you want to be in dance (class).”

Other arts activities, such as a clay studio, can serve as a reward for completing assignment in core subjects like math, she said.

Parent Mark Scott said he lives near the Bainbridge House, among the community organizations that partnered with Stanton school, and regularly escorts his son to the community center where he can take advantage of a wide range of educational activities that support the effort he and his wife put in educating their son at home.

Teddy Shabazz, a parent from Point Breeze, said the school was in jeopardy of being shut down several years ago. However, he said the school must make improvements to be on par with the surrounding neighborhood as it undergoes gentrification, which has, in turn, attracted new residents and spurred economic development.

Following the panel discussion, federal, state and local officials met with the local media outlets. Hite said school leaders are looking to replicate quality seen at Stanton at other district-run schools too, saying residents should be more concerned about access and quality of public schools rather than whether it’s run by the local school district or privately managed by an educational provider. The school chief said a large number of public schools remain open with high numbers of students failing to meet benchmarks in reading and math.

“We’re looking for any fiscal responsible plan that would provide children with a better educational situation than they already have,” Hite said.

At Stanton, the full-time violin instructor is paid from the school district’s basic education budget. She described a blended model that relies on funding from the School District of Philadelphia and private funding. She said communities with fewer resources would benefit from community partnerships with schools, funding and teacher artistic talent.