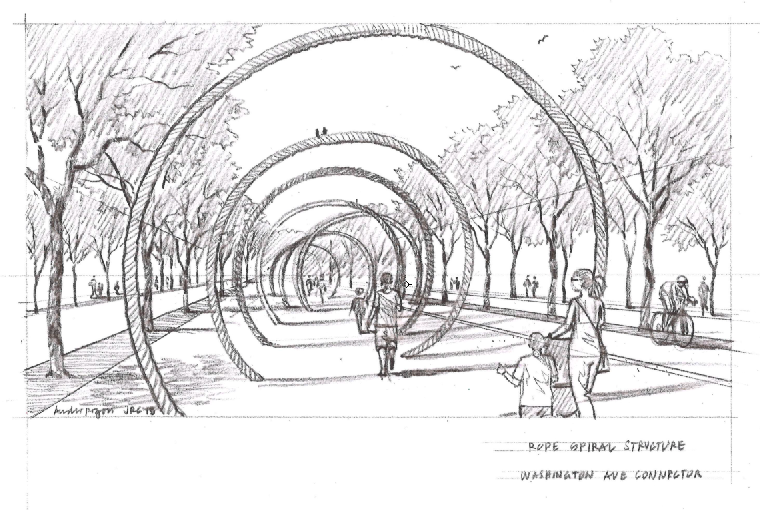 An artist’s rendering of a concept for the multi-use path that would incorporate the area’s history as a rope-making hub. — DRWC

An overhead rendering offers a closer look of DRWC’s concept for revamping Washington Avenue between 4th and 2nd streets. — DRWC

An artist’s rendering of a concept for the multi-use path that would incorporate the area’s history as a rope-making hub. — DRWC

An overhead rendering offers a closer look of DRWC’s concept for revamping Washington Avenue between 4th and 2nd streets. — DRWC

Maybe it was the fond memories of New Year’s Day parades past evoked by the brigade banners hung along the Mummer Museum’s walls.

But after planners from the Delaware River Waterfront Corp. presented an initial concept for remaking the eastern end of Washington Avenue that could remove as many as 60 on-street parking spaces, not a single heckling voice emerged from the dozens who gathered for a Monday night meeting.

“I think it’s a good step forward,” said Debi Richter, a Pennsport resident. “We need some beautification of Washington Avenue. It’s a great neighborhood — it [just] needs some makeup.”

In conjunction with its efforts to redevelop the Delaware River waterfront, the DRWC has sought to redesign a series of “connector streets” to the river — and Washington Avenue is the latest effort. The Pennsport initiative follows similar projects that improved pedestrian access and lighting under I-95 along Race and Spring Garden streets.

The Washington Avenue project is arguably DRWC’s most ambitious connector project to date, encompassing the five blocks between Fourth Street and Delaware Avenue. Following an initial public outreach meeting and community walk-throughs of the area in the spring, the DRWC design team unveiled a concept to improve public space, pathways for pedestrians and cyclists, and smooth traffic flows.

That side road begins by cutting into Jefferson Square between Fourth and Third streets. The waterfront planning and development organization suggests removing it completely to expand the park all the way to Washington Avenue’s main corridor.

A multi-use trail for cyclists and pedestrians would begin at Jefferson Square and run all the way to Delaware Avenue, where it would connect with an improved trail DRWC is planning to build along the river. The trail would run where there is now a concrete divider between Washington Avenue’s main stretch and the side street.

The side street would remain between Third Street and Moyamensing Avenue to provide parking for the businesses located on both side of Washington, but the traffic flow there would switch to westbound.

The Mummers Museum takes up the small block between Moyamensing Avenue and Second Street. DRWC’s concept calls for replacing the side street in front of the museum with a performance space. While this stage area would be a city-owned, public space open to anyone, Mummers “are really excited about it,” said Spencer Finch, project manager for Langan Engineering, which is leading the William Penn Foundation-funded design project.

The DRWC concept calls for replacing the side street between Second and Front streets with a passive space, akin to some of the parklets dotting the city. The sliver of Alter Street that forms a triangle of houses would remain unchanged.

A dog park would replace the side street in the section that runs underneath I-95. The concept takes inspiration from a similar canine park built under an expressway in Tampa Bay. Rizzo Rink, the city skating facility built under the interstate in the 1970s, wouldn’t be affected by the plan beyond the addition of new lighting to the area.

Between I-95 and Delaware Avenue, the plan suggests removing the side street to make room for a plaza, perhaps with a sidewalk cafe. It also suggests reconfiguring Washington Avenue’s travel lanes to improve traffic flows onto Delaware Avenue. The fast-moving road would get pedestrian islands in the median, an intervention planners believe will make it safer for those crossing to reach the Washington Avenue Green Pier at Columbus Boulevard. Richter, who’s involved with Friends of Washington Avenue Green, asked DRWC to consider improving the sign demarcating the entrance to the pier-park.

Those attending Monday’s DRWC meeting, which sought to solicit further feedback on the concept before the proposal is finalized, overwhelmingly supported the plan. But the real test will come in subsequent weeks as the neighboring registered community organizations review the idea at their upcoming meetings.

Formally, the concept needs both the city’s Streets Department and PennDOT to sign off. Politically, it will need the support of district Councilman Mark Squilla to advance. Squilla, who attended Monday’s meeting, said he supported DRWC’s efforts, but was unwilling to endorse the nascent proposal. Council members often defer to registered community organizations to determine whether to support projects like this.

The plan also calls for “de-cluttering” the avenue’s street signage and upgrading the road’s traffic signals. According to Finch, a traffic study conducted for DRWC showed that cars regularly reach speeds in excess of 40 mph along this stretch of Washington Avenue, but the average speed doesn’t reach 15 mph because of uncoordinated traffic signals. By better timing the signals to create a “green wave” for cars going the speed limit, the hope is to curb some of the most aggressive driving while also making it a more efficient route.

After incorporating community feedback, DRWC will prepare a final plan for the Washington Avenue connector street project. That plan, in turn, will be used to seek state and private foundation grants to pay for the project’s final design and then construction. At this point, there is no estimate of what the project will ultimately cost or when it will be completed. — (WHYY)

Is South Street’s retail apocalypse coming to an end?

On a famously eclectic, and lately, unlucky, strip of South Street, a turnaround appears to be in the making.