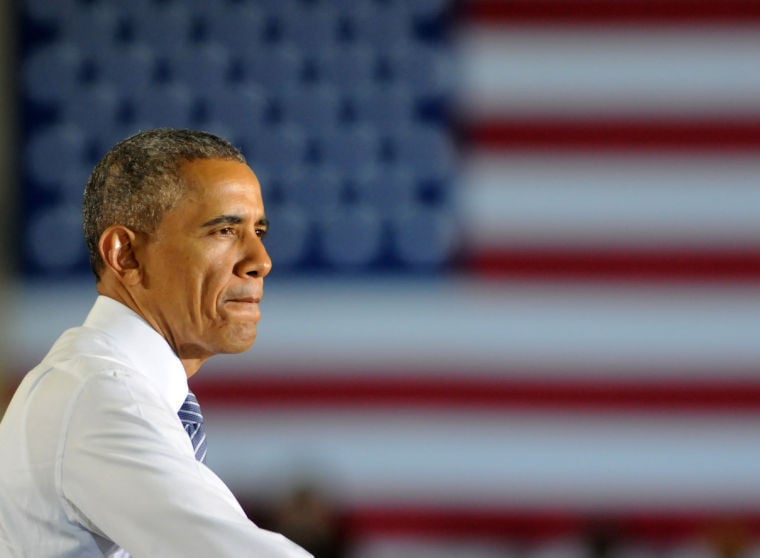 President Barack Obama speaks during a visit to the University of Kansas on Thursday. He was speaking about the themes in his State of the Union address. — AP Photo/Charlie Riedel 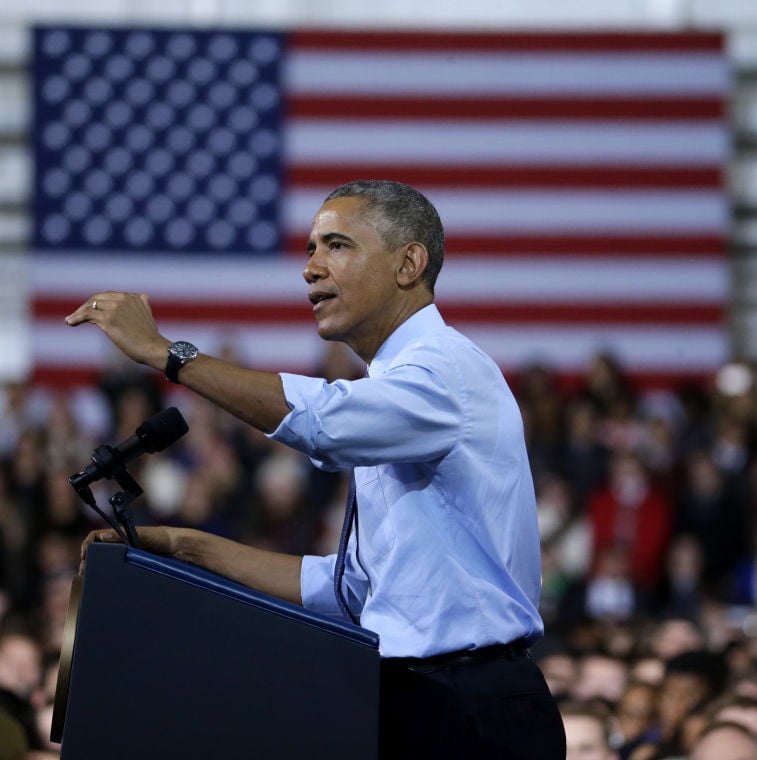 President Barack Obama speaks during a visit to the University of Kansas on Thursday, in Lawrence, Kansas. Obama was speaking about the themes in his State of the Union address. — AP Photo/Charlie Riedel 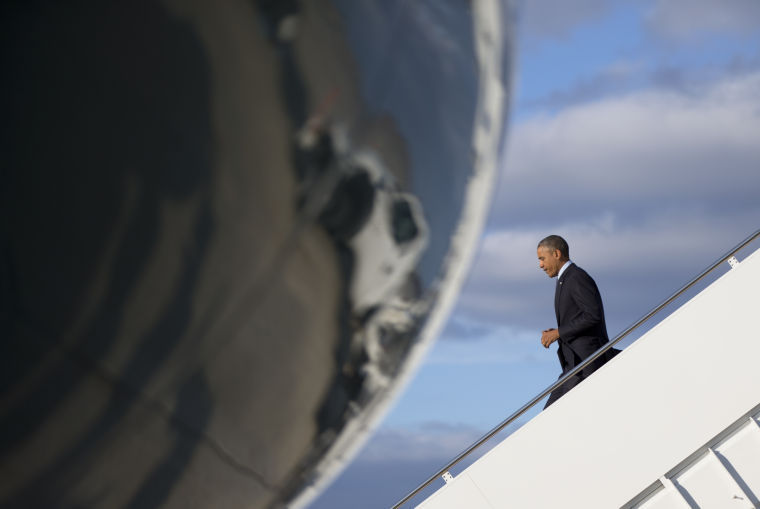 President Barack Obama steps from Air Force One, Thursday, Jan. 22, 2015, at Andrews Air Force Base, Md., as he returned from speaking at the University of Kansas about the themes in his State of the Union address. (AP Photo/Carolyn Kaster)

President Barack Obama speaks during a visit to the University of Kansas on Thursday. He was speaking about the themes in his State of the Union address. — AP Photo/Charlie Riedel

President Barack Obama speaks during a visit to the University of Kansas on Thursday, in Lawrence, Kansas. Obama was speaking about the themes in his State of the Union address. — AP Photo/Charlie Riedel

President Barack Obama steps from Air Force One, Thursday, Jan. 22, 2015, at Andrews Air Force Base, Md., as he returned from speaking at the University of Kansas about the themes in his State of the Union address. (AP Photo/Carolyn Kaster)

While only fewer than 32 million Americans watched the president’s State of the Union (SOTU) address this week — not counting the millions who were watching it unfold on Twitter — it was still ranking as, arguably, the most highly anticipated national speech of any year.

On many levels, this was one of the more consequential SOTUs of President Barack Obama’s administration and legacy. Described by observers on the left and right as an ambitious outline of progressive policy prescriptions, there will be fierce debate over the next year as the president wrestles with emboldened Republicans over the costs of those programs. With the political climate viewed as rocky, if not altogether fragile, experts expect rough months ahead and a policy road laid with fiscal-cliff land mines.

But what was clear with this particular SOTU was its struggling quest for connection with the American public. That’s been a particular challenge for this president, as of late. Yet, a buoyant post-midterm election President Obama seemed much more interested in speaking over Congress than to it on Tuesday night, as he spent an enormous amount of capital reflecting on a revived economy and his prescription for either entry into or maintenance of the middle class.

Hence, his call to “turn the page” sought to ring an optimistic spin on what is still a tenuous economic situation.

“At this moment, with a growing economy, shrinking deficits, bustling industry, booming energy production, we have risen from recession freer to write our own future than any other nation on Earth,” the president said. “It’s now up to us to choose who we want to be over the next fifteen years, and for decades to come.”

The word “poor” wasn’t referenced in this speech, but the obsession with raising the middle class back to pre-recession levels appeared hopeful, if not idealistic, something in these proposals could help their lot.

Striking a somewhat motivational tone may have paid some temporary dividends as the president now heads into protracted combat with Republicans over his proposals. A post CNN poll found 72 percent of Americans agreeing the president’s plan would steer the country in the right direction, up a full 15 percentage points from a pre-SOTU poll which asked the same question. Over half of those respondents also felt the speech was “very positive,” in addition to 30 percent who thought it was “somewhat positive.”

That’s also a marked improvement from a YouGov poll taken the weekend before the SOTU, which showed only 8 percent of Americans convinced the president would persuade them things would improve any better than in previous years.

Where the president seemed equally resigned and defiant in his SOTU when talking to an expanded majority of Republicans in Congress, he also appeared clinically insistent on aligning policy goals with public sentiment. The administration had been rolling out elements of the SOTU weeks before it dropped. The president test drove the message for resonance before making a delivery.

And beyond the political analysis and timing, these issues are as vital as they are potentially popular. A free community college program simply acknowledges the reality 46 percent of all undergraduate students attend some kind of two-year associate’s degree institution. Calling for a federal hike in the minimum wage is actually concern, despite narratives of a robust economic recovery, wages have been generally flat and job growth is mainly seen in either part-time or low-wage work.

Cost of living is getting higher and policy makers are attempting to figure out how wages can keep up.

“One of the motivations to have differing minimum wages is to adjust for cost of living, which varies widely throughout the country,” noted Charles Gascon in a recent Federal Reserve Bank of St. Louis study. “Although most minimum wages are set at the state level, cost-of-living discrepancies also occur within states, skewing the purchasing power of workers within a state.”

Child care prices are also soaring as working parents are unable to afford what amounts to an expense that’s, on average, higher than a public college tuition. Center-based child care costs nearly $12,000 annually, according to a study by Child Care Aware America.

The gradual White House pre-game strategy did draw criticism from many old-school political observers stuck on SOTU tradition, and it could be partly responsible for the historically low viewership. But it could also explain why this SOTU polled so well in the post-remark assessment.

While many people of color wanted the president to publicly acknowledge slain unarmed Black men like Michael Brown in Ferguson, Mo., and Eric Garner in Staten Island, N.Y., the president was careful not to venture there based on the raw racial tensions gripping the nation at the moment. And, with the White House carefully watching numerous surveys, movements such as #BlackLivesMatter are not polling very well at the moment as it has yet to transition into a political strategy.

For the most part, policy focal points based on broad subject matter themes matched with public attitude. According to an analysis by Gallup, nearly a full half-an-hour was spent discussing the economy in different parts throughout the speech, as opposed to only one full minute on the hot button topic of race. Twelve minutes found the president pausing then aiming for emotional pitches when making a plea for national unity. A little over 10 minutes was still a considerable amount of time spent on foreign policy. And topics like education, national security and climate change received anywhere from four full minutes to just about two minutes each, respectively.

That’s about right where most Americans see the country’s direction, at least according to Pew Research Center’s Bruce Drake.

“Despite a year of turmoil and new threats abroad, Americans still overwhelmingly say it is more important for Obama to focus on domestic policy than foreign policy, although by a smaller margin than previous years,” observed Drake. “The public has put the priority on domestic matters each year during Obama’s presidency. This year, 67 percent hold that view, lower than previous years, when it was as high as eight in 10 or more. One-in-five Americans want Obama to focus more on foreign policy — that figure had been in single digits the previous three years.”

Hence, amplified worries over terrorism triggered by the viral spread of the Islamic State in the Middle East and recent attacks in Paris have left the American public much more anxious about geopolitical events. With the economic situation appearing to stabilize, 76 percent of Americans polled by Pew placed terrorism above economic concerns at 75 percent. Other issues such as immigration, cybersecurity, community colleges and energy also ranked in the top 10 Pew issue assessment list, but they all received nearly the same amount of attention in the SOTU as they’re receiving in recent policy surveys.