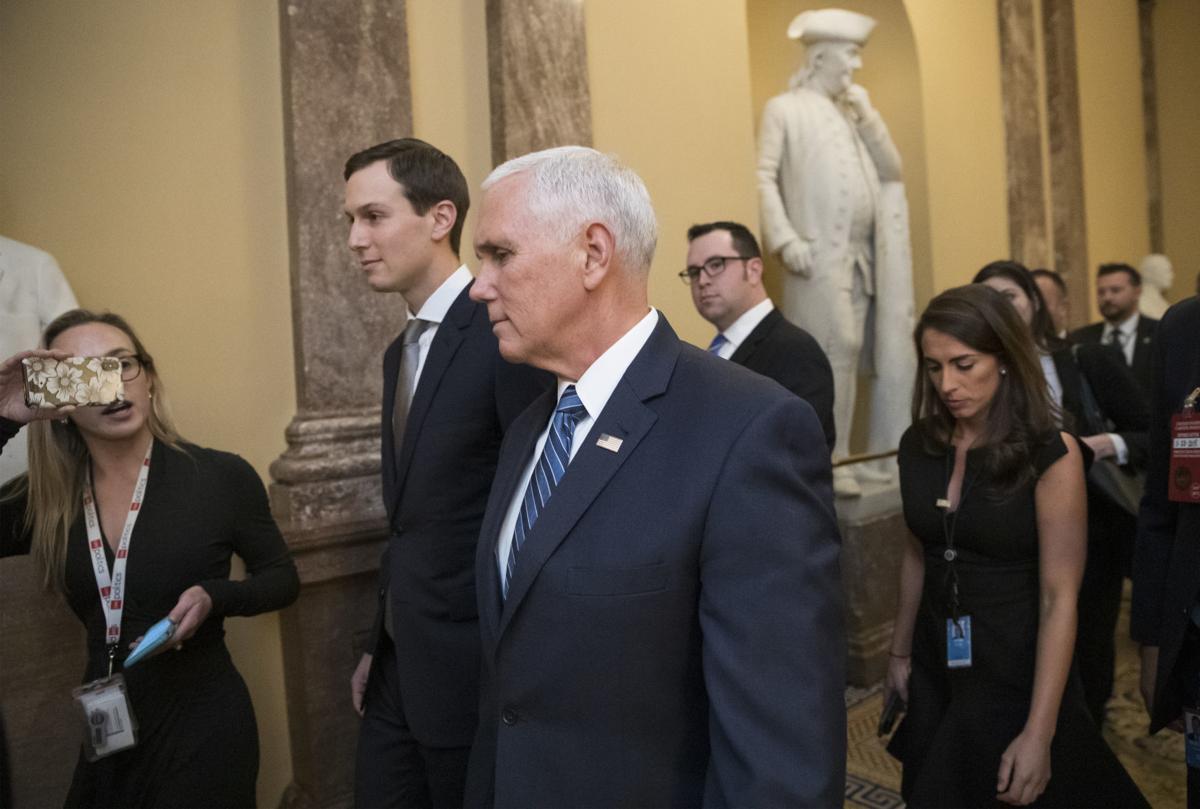 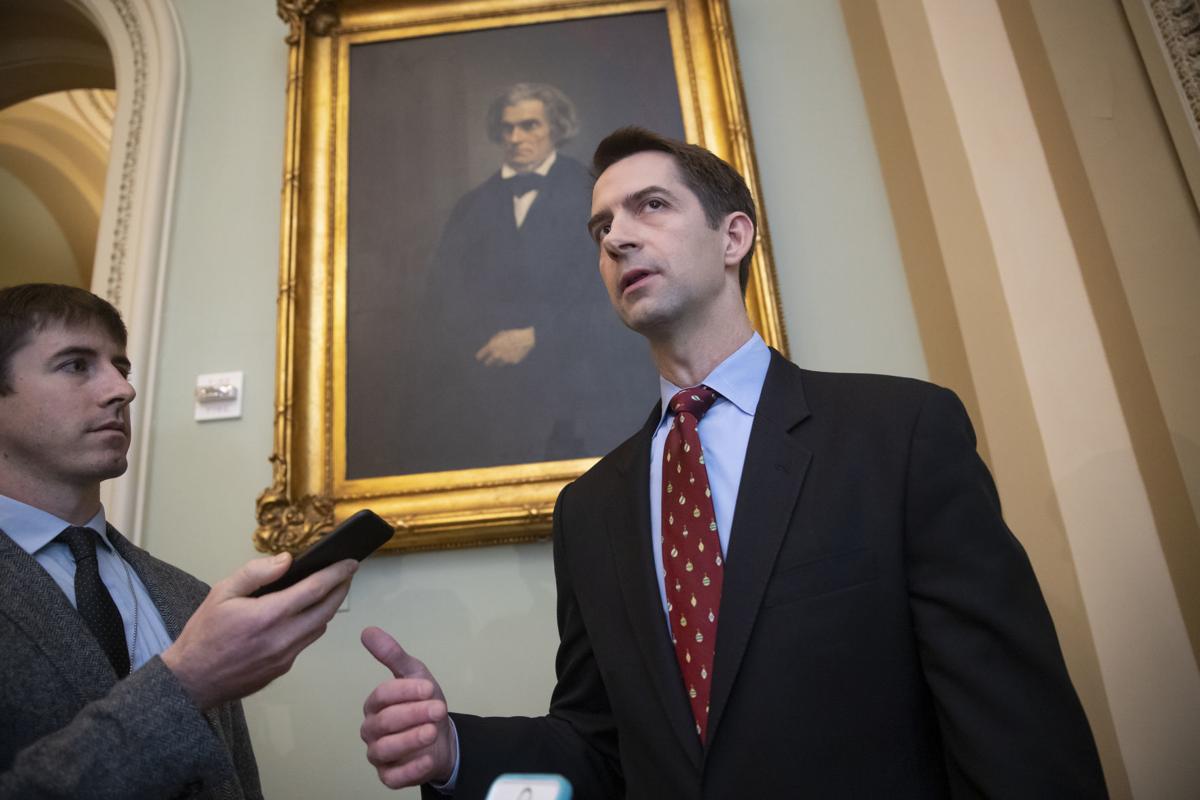 Sen. Tom Cotton, R-Ark., speaks to reporters as he arrives for a meeting with fellow Republicans, including Vice President Mike Pence and President Donald Trump's son-in-law, Jared Kushner, who are at the Capitol to discuss the nation's criminal justice sentencing laws, in Washington, Tuesday, Nov. 27, 2018. (AP Photo/J. Scott Applewhite)

Sen. Tom Cotton, R-Ark., speaks to reporters as he arrives for a meeting with fellow Republicans, including Vice President Mike Pence and President Donald Trump's son-in-law, Jared Kushner, who are at the Capitol to discuss the nation's criminal justice sentencing laws, in Washington, Tuesday, Nov. 27, 2018. (AP Photo/J. Scott Applewhite)

Senators announced a bipartisan agreement on the legislation earlier this month, but McConnell has yet to say whether he will hold a vote on the bill. The No. 2 Republican in the Senate, Texas Sen. John Cornyn, said Tuesday that GOP leaders are counting votes to see if the legislation has enough support to pass.

Pence and Kushner were expected to push McConnell on the legislation at a private luncheon for Republican senators. The package has been a top priority for Kushner.

The legislation has created a rare split between the White House and some of the most conservative Republican senators, who say the bill could reduce penalties for some serious drug offenders and let some violent offenders out of prison. Supporters of the measure, including many Republican lawmakers, say those concerns are overblown.

At a roundtable on the legislation in Mississippi on Monday, Trump said the bill would "enact reasonable sentencing reforms to ensure fairness while keeping dangerous criminals off the street," adding that the legislation would revitalize the criminal justice system to be "tough on crime but also smart on crime."

Trump endorsed the legislation this month, giving it a huge boost. He said the bill is proof that "true bipartisanship is possible."

A bipartisan group of senators, including Senate Judiciary Chairman Chuck Grassley and Democratic Sen. Dick Durbin of Illinois, has been pushing for action on criminal justice reforms since former President Barack Obama's administration. But McConnell's reluctance to hold a floor vote has come as some members of his caucus have strongly objected to the bill.

Arkansas Sen. Tom Cotton has led that group, arguing that sentences for drug offenders shouldn't be given an earlier release in the middle of a national drug epidemic.

Other Republicans have also expressed concerns. Florida Sen. Marco Rubio tweeted Monday that "Sen. Cotton makes a compelling argument against sentencing reform part of the bill before Senate." He said he'd discuss the legislation with other senators in the coming days.

"The premise of the bill is that our criminal justice system at the federal level is unfair and that sentences are unfair," Kennedy said. "To me, the premise has not been proven."

Still, supporters insist they can get the needed 60 votes if McConnell would just put the legislation on the floor.

Mark Holden, general counsel for the conservative Koch Industries and a longtime champion of prison reform, said he met with McConnell earlier this year and the leader told him that "we were likely to get the outcome we want because he thinks the votes are there."

The House approved a prison reform bill in May, but the proposed Senate package makes additional changes and adds the sentencing component. That means the House would need to revote on anything the Senate passes.

The Senate approach would allow thousands of federal prisoners sentenced for crack cocaine offenses before August 2010 the opportunity to petition for a reduced penalty. It would also lower mandatory minimum sentences for some drug offenses. The life sentence for some drug offenders with three convictions, or "three strikes," would be reduced to 25 years.

The federal inmate population has been on the decline since 2013, when it peaked at just more than 219,000. The total now stands at about 181,400, according to the Federal Bureau of Prisons. Still, that's about triple the number of inmates in federal detention 30 years ago.

Roughly 90 percent of prison inmates are held in state facilities and would not be affected by the legislation.

Supporters say it's crucial to pass the bill now, before they would have to start over in a new Congress in January. Holly Harris, executive director of the advocacy group Justice Action Network, says she believes McConnell will see the "policy value and the political value" and hold a vote.

"It's very rare that you have this door open, and if you have the door open you have to run through it," Harris said.

"Wouldn't it be nice to get a bipartisan bill, cooperation between the Congress and the White House and with all the groups on the right and left who have joined behind us?" Grassley said. "There shouldn't even be a debate if this should come up." —(AP)