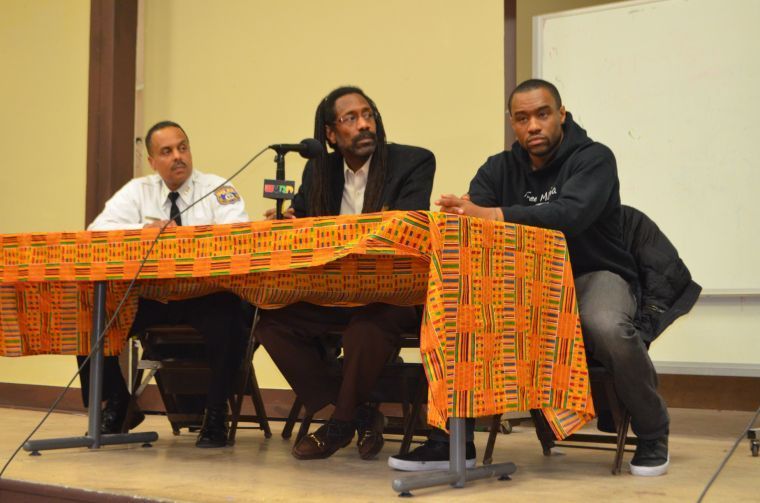 From left, Richard Ross, Michael Coard and Marc Lamont Hill were some of the panelists at the Nov. 20 town hall meeting. 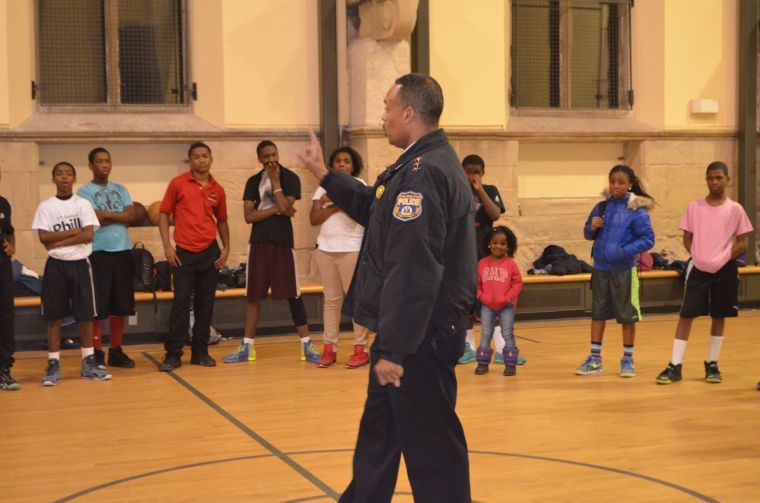 First Deputy Commissioner of Field Operations for the Philadelphia Police Department, Richard Ross, spoke with youth at the Church of the Advocate’s after school basketball program.

From left, Richard Ross, Michael Coard and Marc Lamont Hill were some of the panelists at the Nov. 20 town hall meeting.

First Deputy Commissioner of Field Operations for the Philadelphia Police Department, Richard Ross, spoke with youth at the Church of the Advocate’s after school basketball program.

A panel of social activists, attorneys and educators discussed solutions for violence in the Black community at a town hall meeting this week hosted by The Philadelphia Regional Justice Collaborative, in partnership with the Institute of the Black World 21st Century.

The town hall meeting was held at North Philadelphia’s Church of the Advocate as a precursor to the groups’ one-day mini conference, Our Brothers and Sisters Keepers: Developing Strategies for Addressing Violence and Fratricide, for youth and adults.

“The purpose of tonight was to provide an opportunity for people who live in the community and around the community to come together with who they ordinarily who would not come in contact with and share some solutions so we can begin to resolve the matter of violence and fraticide in our community,” said James Dickerson, a town hall co-convener.

Major topics of the meeting included police brutality against Black males and violence Black males commit against each other.

Attorney Michael Coard said that the best way to fight police brutality is to take a cue from the Black Panther Party and expose such behavior.

Coard then advised the audience to download the “F [ilm] The Police” phone application that allows one to record a police encounter and relays the information to the American Civil Liberties Union.

First Deputy Commissioner of Field Operations for the Philadelphia Police Department, Richard Ross, then shared that the office was moving to outfit officers with such devices. But, he added, he wished citizens were as willing to report Black on Black crime, as they were of police brutality, noting that there is “nothing more frustrating” than seeing the rates of Black on Black crime.

“We wish that enthusiasm would come to bare when it comes to Black men killing each other,” Ross said. “In the lion’s share of cases, when Black people hurt Black people, people don’t come forward to the police and we all know that to be true. The reality is that most shootings can be solved because someone knows about it. However most of the people don’t tell and most of the people who know look like you and me.”

Cleora A. Levetter, Ph.D, an education and motivational consultant replied that “our black male children are intimidated every single day by the police,” but that it’s not measured.

Coard, using the analogy of Frankenstein creating a monster, responded that such crime is a “direct result of yesterday’s racism. Nobody wants to be an animal. They do it because there are no alternatives.”

The town hall ended with panelists making recommendations on how to address the violence, from all sides.

“It’s love, spreading love, “said Hip-Hop artist and activist Jasiri X. “[And] young people want to belong. We have to find ways to empower them. If we could empower our young people, we could get this done overnight.”

“Organizing” was a heavily pushed solution as well.

“Organize and speak out against what’s wrong, speak out against injustice, [don’t] hold it in but be vocal because that’s the only way we are going to be able to get any type of policy change,” said Nkechi Taifa, an attorney and activist.

“There’s so much struggle going on, so much work that needs to be done, but we’ve surmounted every obstacle we ever faced. There’s nothing we can’t do if we organize and commit to turning to each other and not on each other.”

Terrill is a front line union worker from Philadelphia, Pennsylvania who supports raising the minimum wage to $15. He is excited about the Biden-Harris Build Back Better Plan and believes that this plan will not only benefit him, but all of Black America and the middle class.