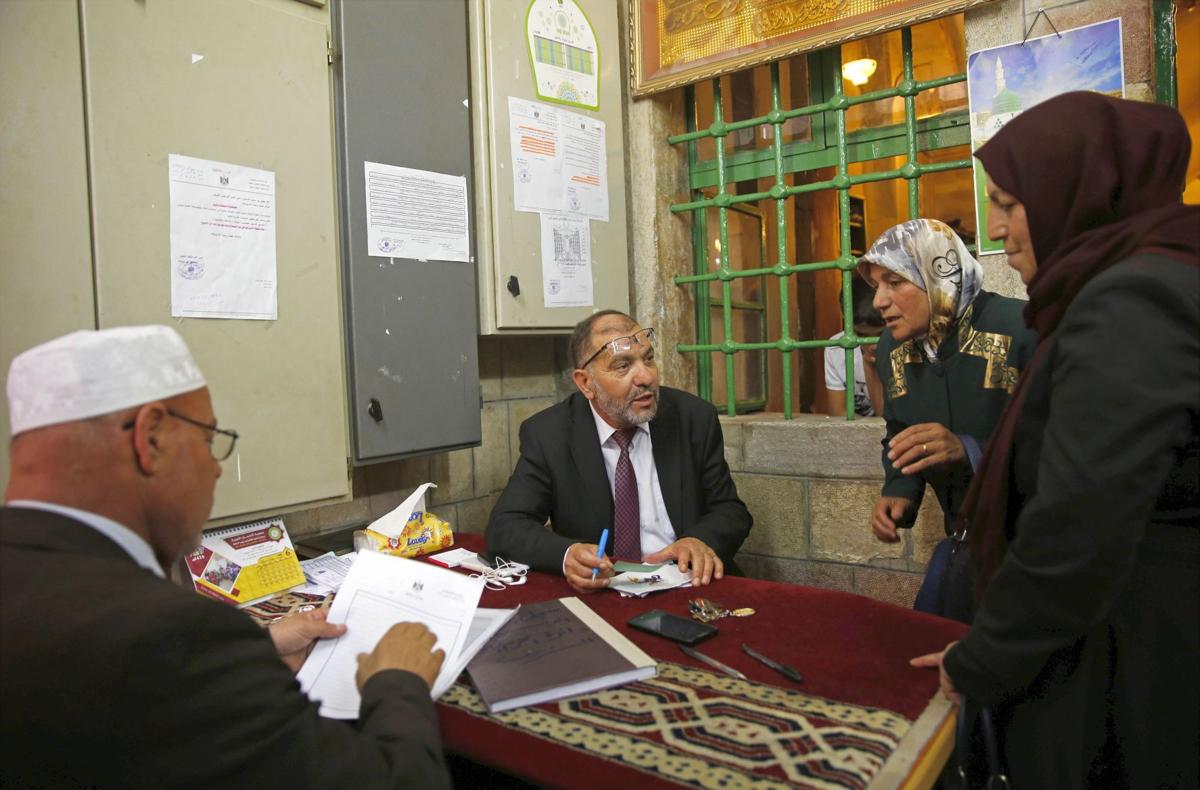 The Mayor of Hebron Tayseer Abu Sneineh talks to people who have requests for help, inside a mosque in the West Bank city of Hebron. — AP Photos/Nasser Shiyoukhi 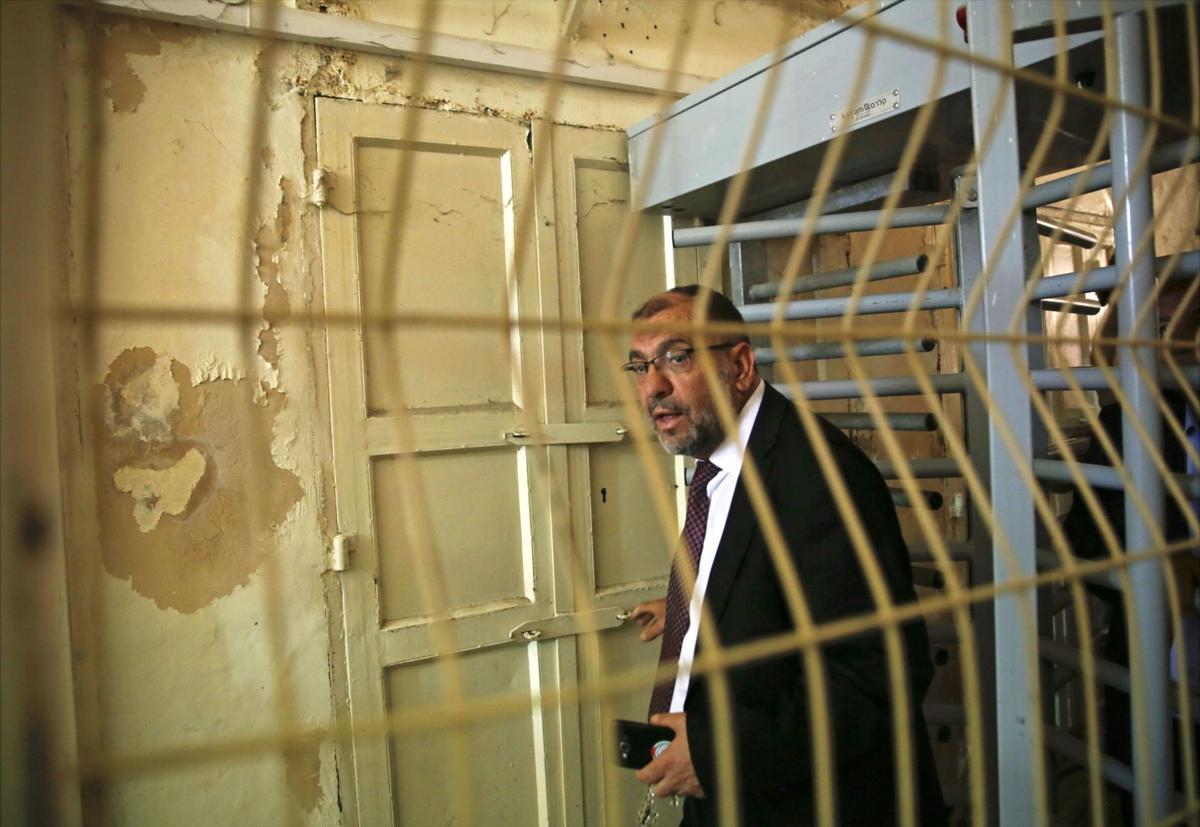 The Mayor of Hebron Tayseer Abu Sneineh goes through an Israeli checkpoint to visit an Israeli controlled part of the West Bank city of Hebron. 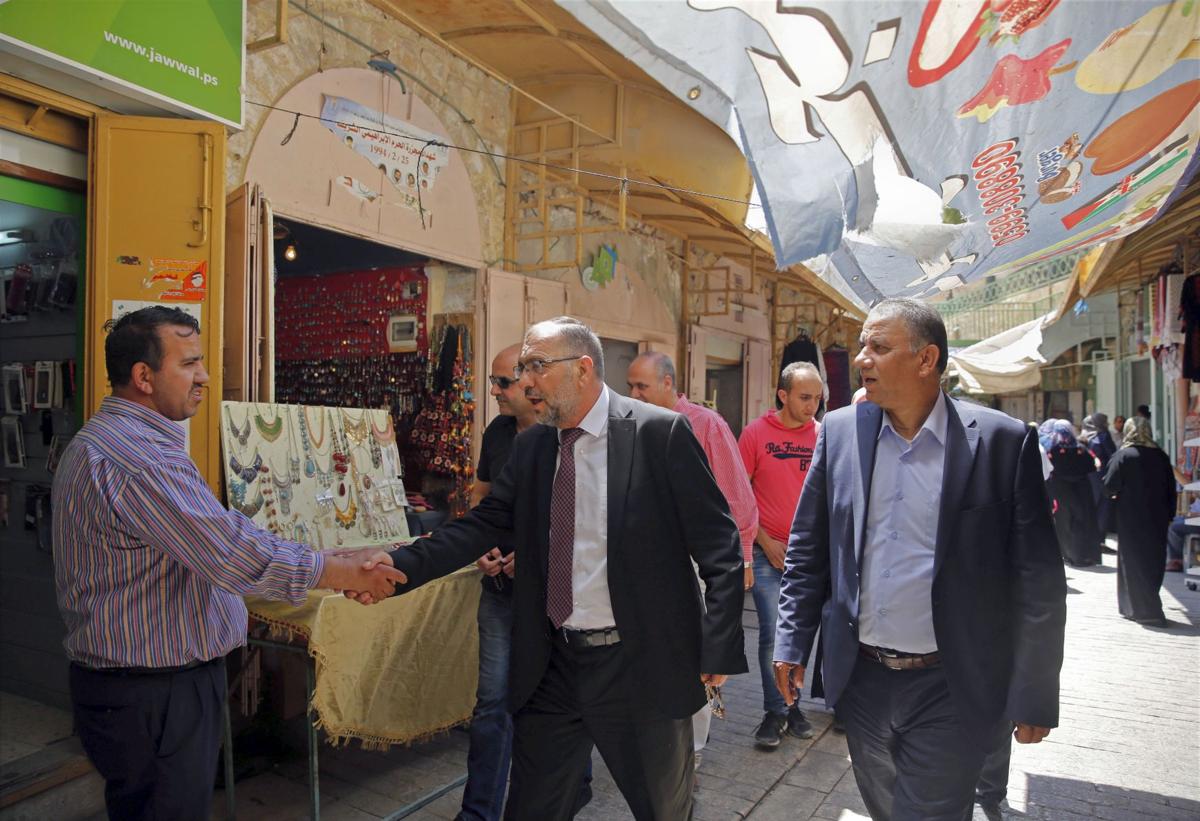 The Mayor of Hebron Tayseer Abu Sneineh greets a shopkeeper at a market in the West Bank city of Hebron.

The Mayor of Hebron Tayseer Abu Sneineh talks to people who have requests for help, inside a mosque in the West Bank city of Hebron. — AP Photos/Nasser Shiyoukhi

The Mayor of Hebron Tayseer Abu Sneineh goes through an Israeli checkpoint to visit an Israeli controlled part of the West Bank city of Hebron.

The Mayor of Hebron Tayseer Abu Sneineh greets a shopkeeper at a market in the West Bank city of Hebron.

HEBRON, West Bank — For Palestinians, the new mayor of Hebron is a hero who they hope will improve their city. But to Israelis, the new leader of the divided West Bank city is an unrepentant murderer.

Weeks after the former PLO fighter took office, Tayseer Abu Sneineh is a contentious figure in the West Bank’s most volatile city, showing no remorse for his role in an attack 37 years ago but saying he is now committed to pursuing a peace agreement with Israel.

He sports a short gray beard today, but as a 26-year-old math teacher he took part in an attack in Hebron on Israeli settlers returning home from Friday night Sabbath prayers on May 2, 1980. Six people were killed and 16 wounded.

Abu Sneineh was convicted as one of the gunmen and sentenced to life in prison. But he was released three years later in a prisoner swap between Israel and the Palestine Liberation Organization and deported to Algeria. He returned to the West Bank, along with other exiled PLO figures, after the Oslo interim peace agreement was signed in 1993.

Abu Sneineh says the attack, one of the deadliest on West Bank settlers, was justified.

“They all were armed settlers and soldiers, no women or children,” he recalled. “We attacked them with guns and hand grenades.”

“We wanted to send a message to the settlers that this is our city and they have to leave,” Abu Sneineh added.

Hebron is the West Bank’s most populous city, holy to Muslims and Jews, where several hundred nationalist Israeli settlers live in fortified compounds in the midst of 170,000 Palestinian inhabitants.

Palestinians must frequently cross through military checkpoints to get around the area, and the close proximity of the two populations has turned the city into a flashpoint of violence. Hebron has been the epicenter of many of the Palestinian attacks targeting Israelis in the past year and a half.

The Palestinians seek the West Bank, captured by Israel in 1967, as the heartland of a future independent state and say the Jewish settlements there are illegal — a position that has wide international backing.

Israel says the presence of its settlers is justified by an ancient Jewish connection to Hebron going back to the days of the biblical patriarch Abraham.

Noam Arnon, a spokesman for the Jewish community of Hebron, called Abu Sneineh “a despicable and cowardly murderer” who killed civilians in their white Sabbath shirts.

“It was a terror attack of the type that took place recently in Paris and London,” Arnon charged. “The fact that he boasts about it proves what a despicable murderer he is.”

Abu Sneineh shrugged off criticism, saying that many Israeli officials served in the military and were involved in the deaths of numerous Palestinians in decades of fighting.

“They killed children, women, the elderly; they bombed schools, residential buildings and killed thousands of Palestinians since the establishment of the state of Israel,” he said.

Now 63, Abu Sneineh said he has put his life as a militant behind him and is focused on the tough reality of governing in a divided city.

Abu Sneineh lives in Hebron’s Old City, an area under tight Israeli military control. Passing recently through an Israeli checkpoint on his way to the Ibrahimi Mosque, a site revered by Jews as the Tomb of the Patriarchs, he was cheered as a native son capable of solving the city’s problems.

His priority these days, Abu Sneineh said, is to improve municipal services for Palestinian residents, including water, electricity and roads. Most of these services are controlled by Israeli authorities.

“We need to double the amount of water, and increase the electricity and expand the boundaries of the city and this needs Israel approval,” he said.

The new mayor’s first challenge in office involved a burst sewage pipe in the Old City. He said it took a week of negotiating with Israeli authorities to obtain a permit for municipal workers to enter the area and fix the pipe.

On his way to the mosque, Abu Sneineh stood in line at a checkpoint with a dozen others waiting for an Israeli soldier behind bulletproof glass to open a revolving gate before they passed through a metal detector. Soldiers prevented an AP team from filming the checkpoint and threatened to arrest a photographer.

“We elected him because he is our son, the son of the old city, and he knows our suffering and we are confident he is going to solve our problems,” said Mohammed Jabir, a 64-year-old barber.

The Palestinians hope to one day establish an independent state that will also include east Jerusalem and the Gaza Strip — areas also captured by Israel in the 1967 Mideast war. That dream is far off after two decades of failed peace talks and the rival Hamas militant group controlling Gaza.

Abu Sneineh said he’s committed to the peace accords with Israel, but warns that if they don’t result in the establishment of a Palestinian state, “the Palestinians will have the right to return to armed struggle.”

He believes the only solution would be for the settlers to leave.

“They are occupiers,” Abu Sneineh said. “They occupy our homes by force. They killed many people in the city in cold blood, and one day they have to leave.” — (AP)