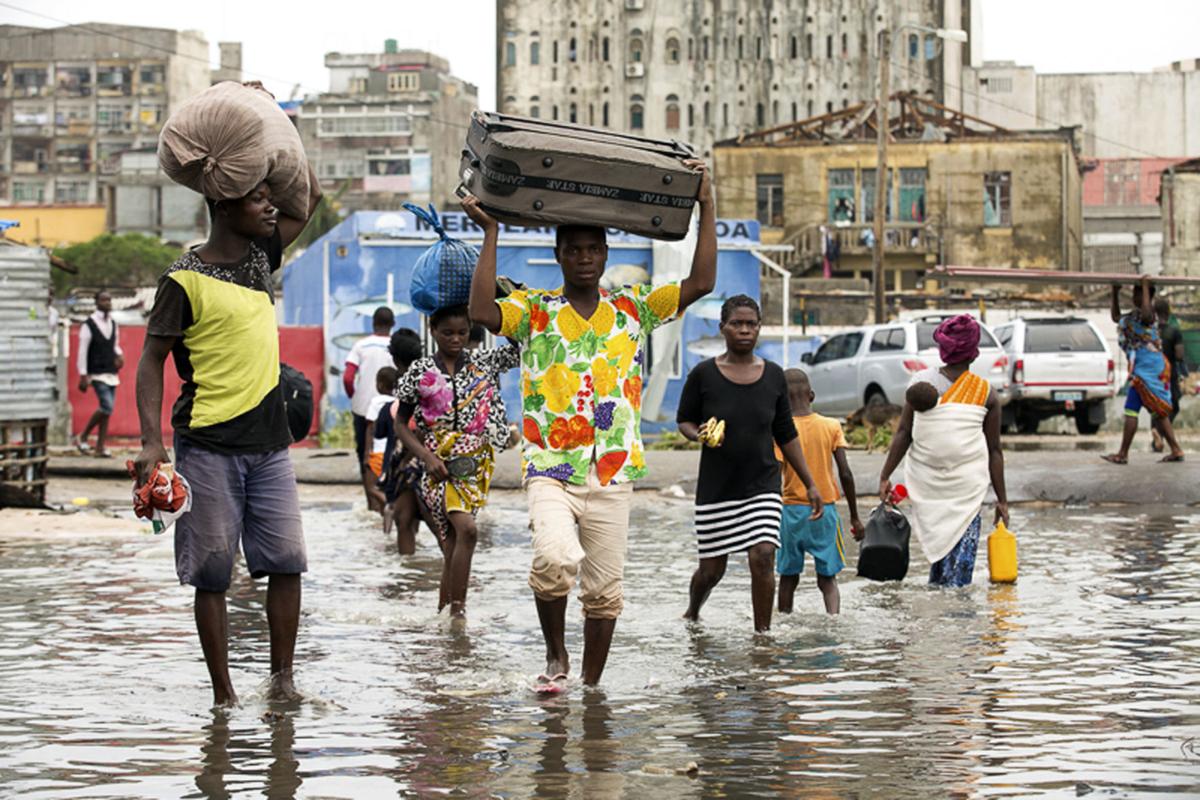 In this photo taken on Friday and provided by the International Red Cross, people carry their personal effects after Tropical Cyclone Idai, in Beira, Mozambique. — Denis Onyodi/IFRC via AP 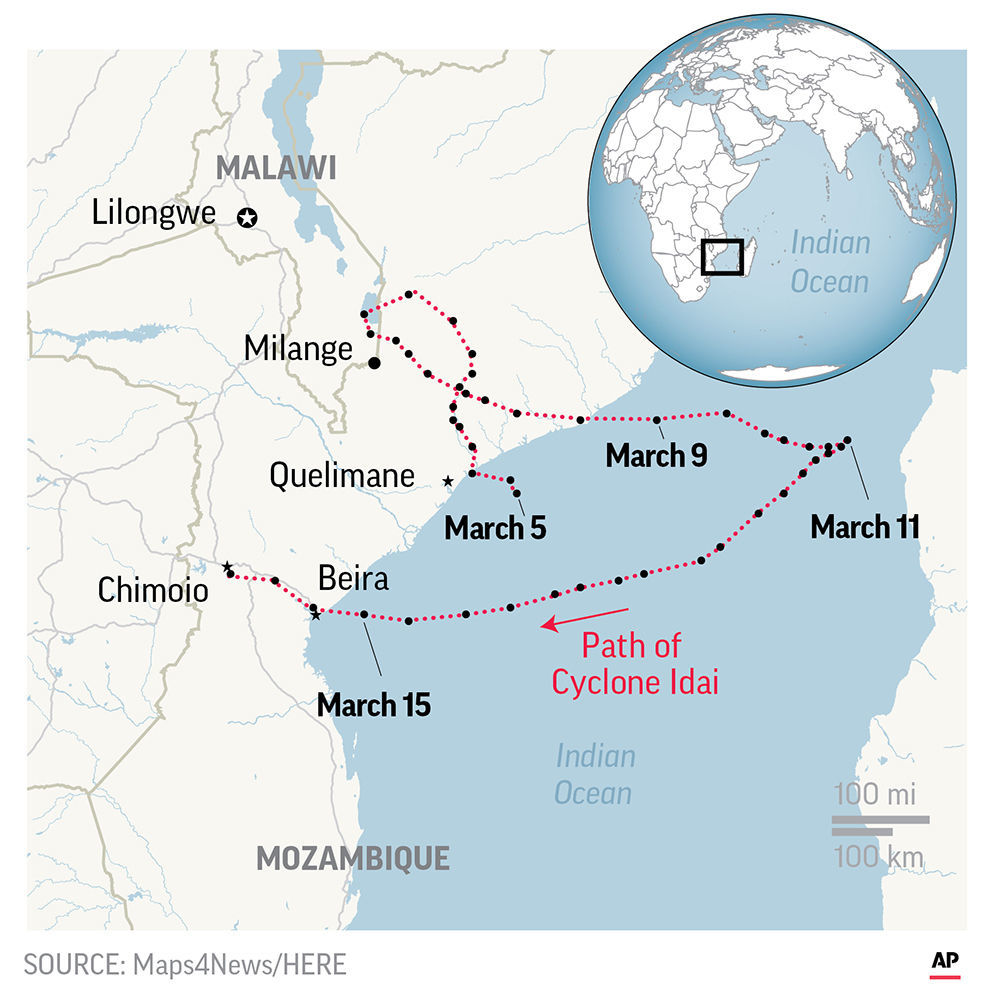 Mozambique’s President Filipe Nyusi says that as many as 1,000 could have been killed by Cyclone Idai. — AP GRAPHIC

In this photo taken on Friday and provided by the International Red Cross, people carry their personal effects after Tropical Cyclone Idai, in Beira, Mozambique. — Denis Onyodi/IFRC via AP

Mozambique’s President Filipe Nyusi says that as many as 1,000 could have been killed by Cyclone Idai. — AP GRAPHIC

JOHANNESBURG — More than 1,000 people were feared dead in Mozambique four days after a cyclone slammed into the country, submerging entire villages and leaving bodies floating in the floodwaters, the nation’s president said.

“It is a real disaster of great proportions,” President Filipe Nyusi said.

Cyclone Idai could prove to be the deadliest storm in generations to hit the impoverished southeast African country of 30 million people.

It struck Beira, an Indian Ocean port city of a half-million people, late Thursday and then moved inland to Zimbabwe and Malawi with strong winds and heavy rain. But it took days for the scope of the disaster to come into focus in Mozambique, which has a poor communication and transportation network and a corrupt and inefficient bureaucracy.

Speaking on state Radio Mozambique, Nyusi said that while the official death toll stood at 84, “It appears that we can register more than 1,000 deaths.”

Emergency officials cautioned that while they expect the death toll to rise significantly, they have no way of knowing if it will reach the president’s estimate.

More than 215 people were killed by the storm in the three countries, including more than 80 in Zimbabwe’s eastern Chimanimani region, according to official figures. Hundreds more were reported missing and nearly 1,000 homes destroyed in eastern Zimbabwe alone.

U.N. agencies and the Red Cross helped rush emergency food and medicine by helicopter to the stricken countries.

Mount Chiluvo in central Mozambique was badly hit by flooding. One resident said he heard a loud noise, like an explosion, and suddenly saw a river of mud rolling toward his home.

“I was indoors with my children, but when we looked we saw mud coming down the road towards the houses and we fled,” Francisco Carlitos told Lusa, the Portuguese News Agency. The family lost their home and possessions but safely reached higher ground.

The country’s president, who cut short a visit to neighboring Swaziland over the weekend because of the disaster, spoke after flying by helicopter over Beira and two rural provinces, where he reported widespread devastation.

“The waters of the Pungue and Buzi rivers overflowed, making whole villages disappear and isolating communities, and bodies are floating,” Nyusi said.

The United Nation’s humanitarian office issued flood warnings and said heavy rains were forecast for the next 24 hours, including in areas already hit hard by Idai.

The Red Cross said 90 percent of Beira was damaged or destroyed. The cyclone knocked out electricity, shut down the airport and cut off access to the city by road. U.N. officials cited reports that Beira Central Hospital’s emergency room was flooded and without power, and that much of the building’s roof had collapsed.

The destruction in Beira is “massive and horrifying,” said Jamie LeSueur, who led a Red Cross team that had to assess the damage by helicopter because of the flooded-out roads.

The U.N. also warned of devastation outside Beira, in particular of livestock and crops.

“As this damage is occurring just before the main harvest season, it could exacerbate food insecurity in the region,” the U.N. humanitarian office known as OCHA said.

Mozambique is a long, narrow country with a 2,400-kilometer (1,500-mile) coastline along the Indian Ocean. It is prone to cyclones and tropical storms this time of year.

In 2000, Mozambique was hit by severe flooding caused by weeks of heavy rain, a disaster made much worse when a cyclone hit. Approximately 700 people were killed in what was regarded as the worst flooding in 50 years. — (AP)

Mozambique won independence from Portugal in 1975 and then was plagued by a long-running civil war that ended in 1992. Its economy is dominated by agriculture, and its exports include prawns, cotton, cashews, sugar, coconuts and tropical hardwood timber.

More recently it has been exporting aluminum and electric power, and deposits of natural gas were discovered in the country’s north. -

'There is death all over': Cyclone Idai toll rises above 300

CHIMANIMANI, Zimbabwe — Mozambique began three days of national mourning on Wednesday for more than 200 victims of Cyclone Idai, while the dea…

CHIMANIMANI, Zimbabwe — A week after Cyclone Idai hit coastal Mozambique and swept across the country to Zimbabwe, the death, damage and flood…