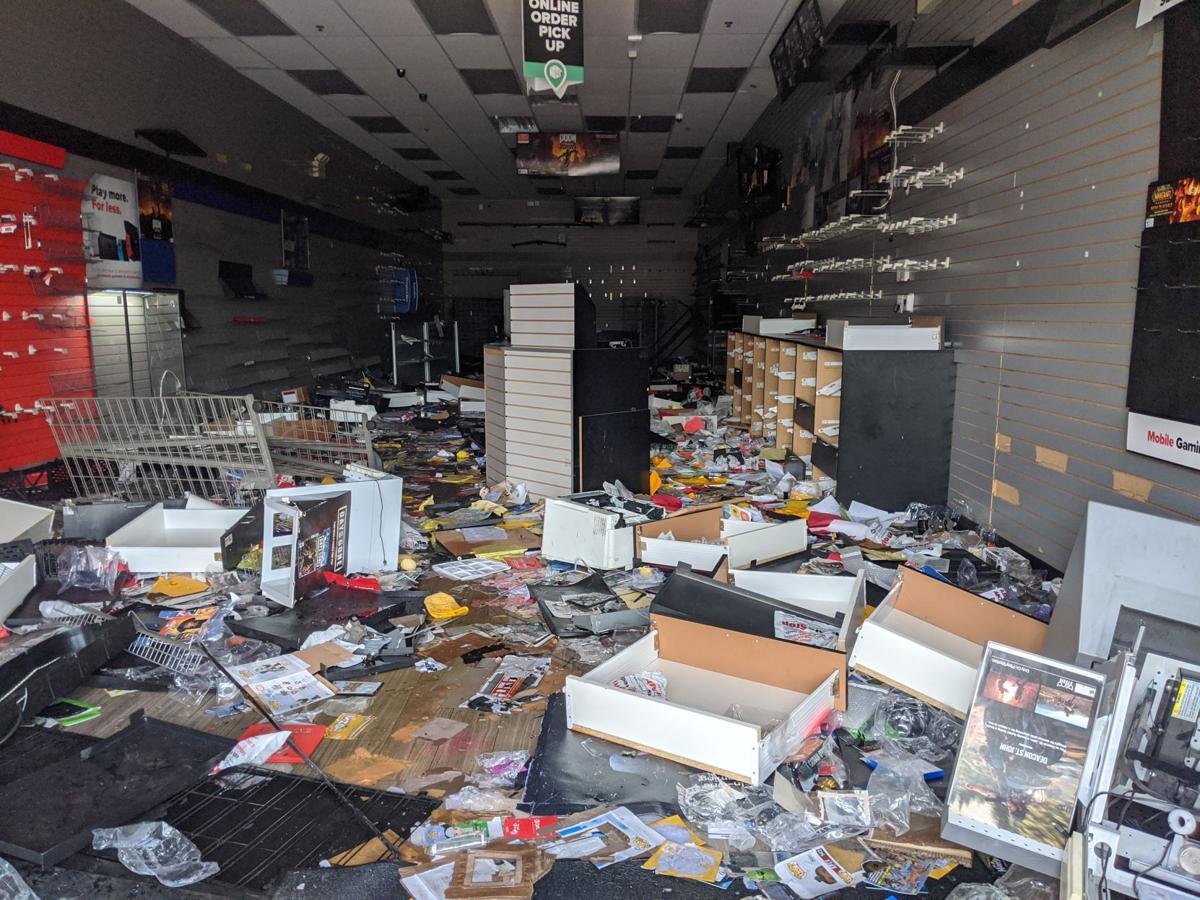 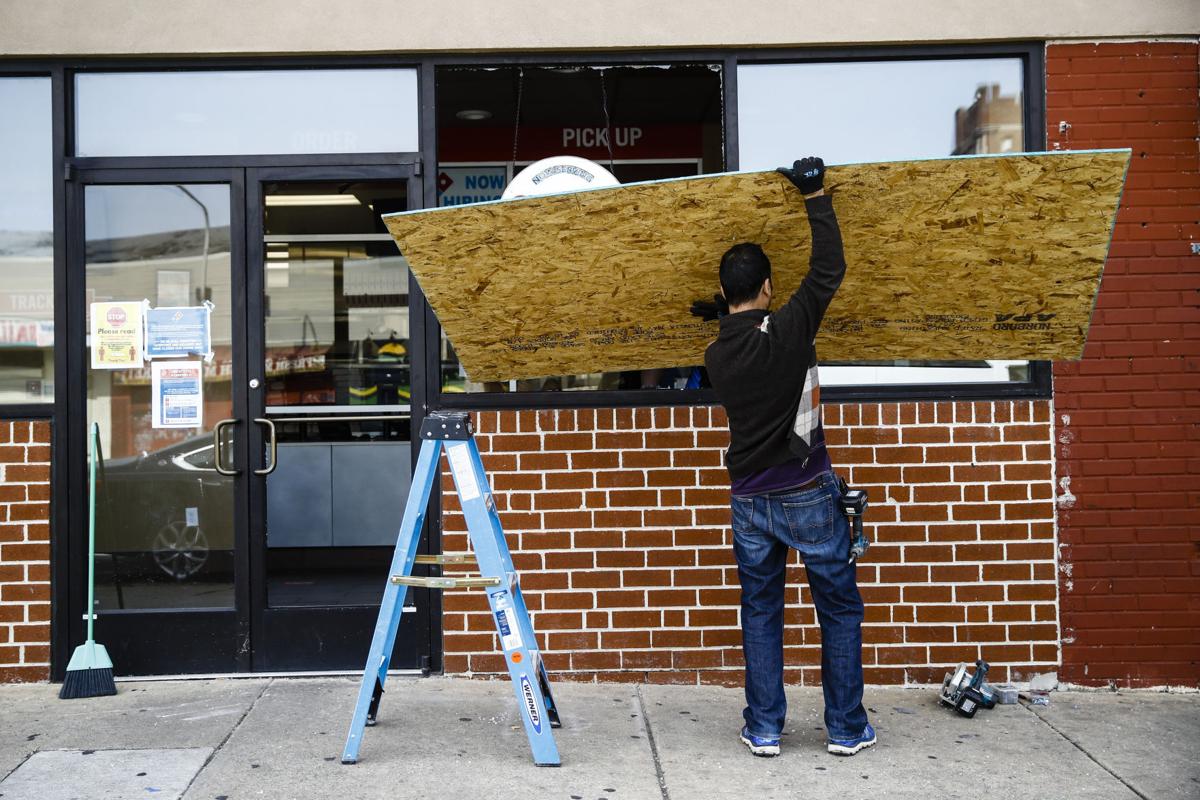 A man boards up a smashed window in Philadelphia in June 2020 in the aftermath of protests and unrest in reaction to the death of George Floyd. —AP Photo/Matt Rourke, File 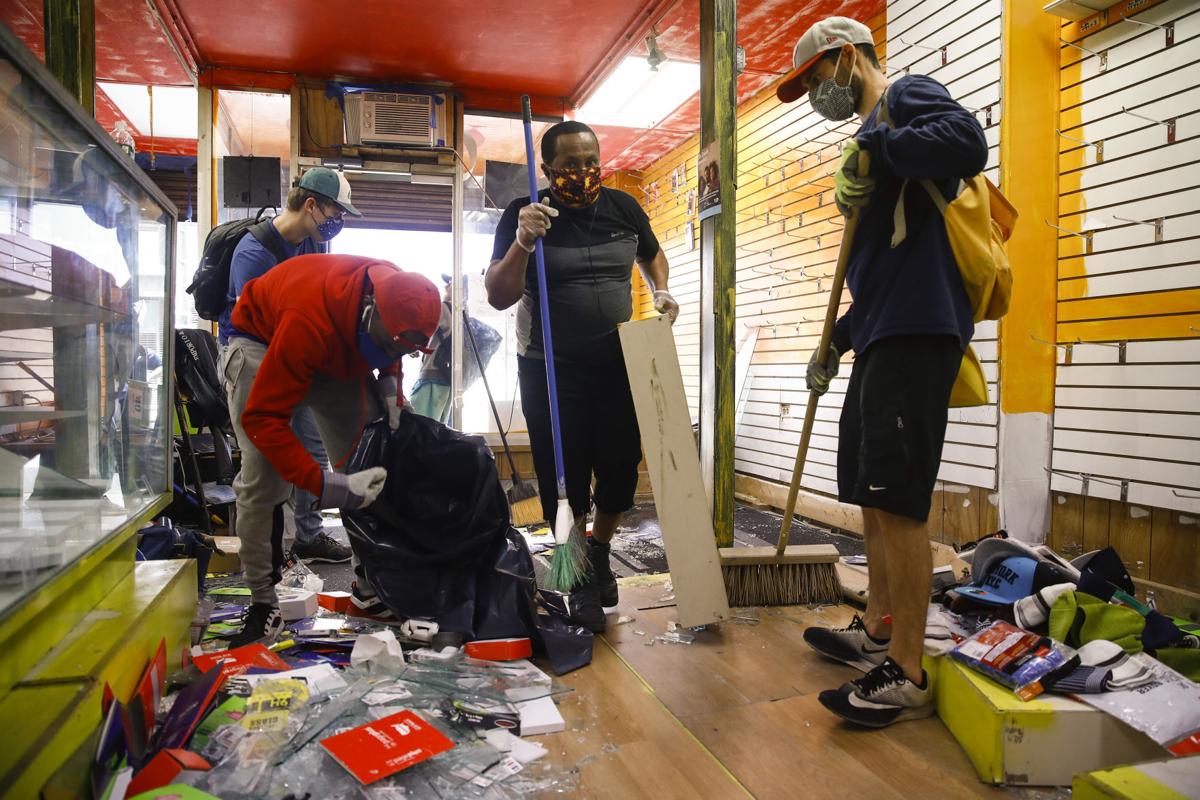 Volunteer community members clean up a looted store in Philadelphia in June 2020. 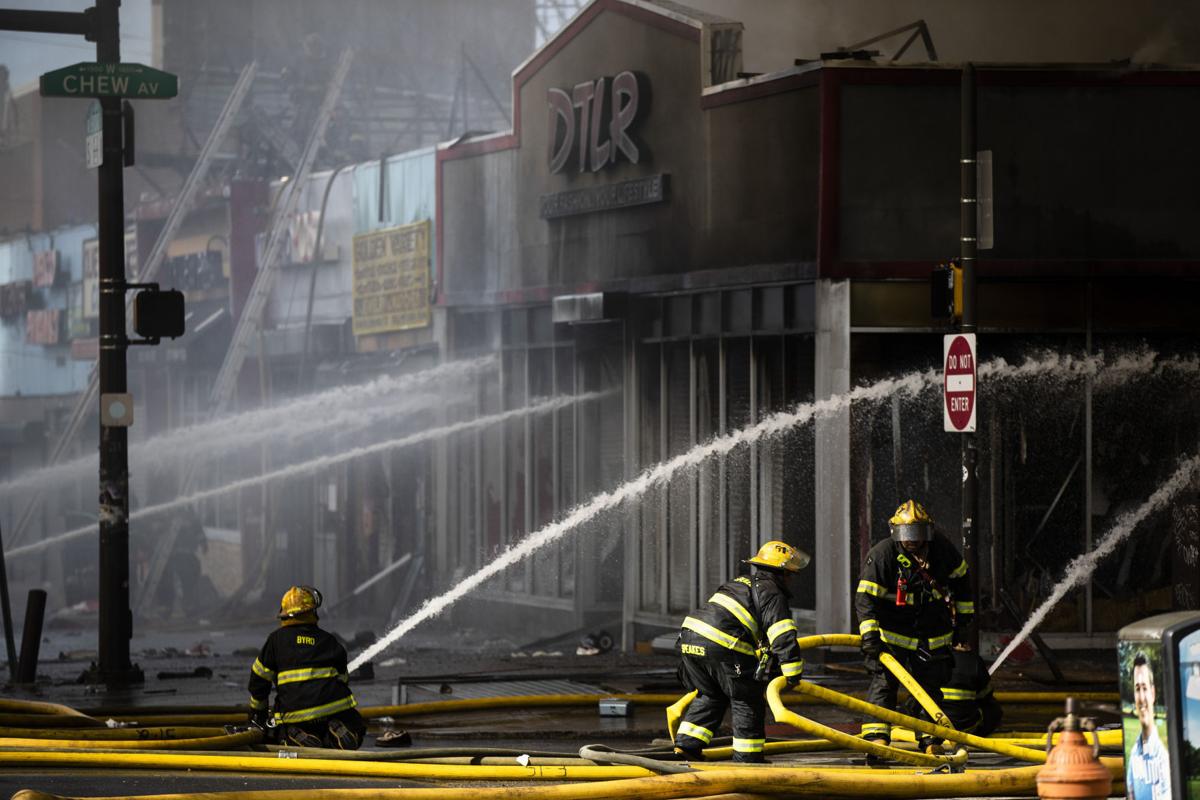 Firefighters battle a blaze in Philadelphia in June 2020 in the aftermath of the George Floyd death-related unrest. —AP Photo/Matt Rourke, File

A man boards up a smashed window in Philadelphia in June 2020 in the aftermath of protests and unrest in reaction to the death of George Floyd. —AP Photo/Matt Rourke, File

Volunteer community members clean up a looted store in Philadelphia in June 2020.

Firefighters battle a blaze in Philadelphia in June 2020 in the aftermath of the George Floyd death-related unrest. —AP Photo/Matt Rourke, File

As the trial of a former Minneapolis police officer charged in the death of George Floyd is set to begin next week, Jabari Jones says he’s “extremely worried” for West Philadelphia businesses.

Now Jabari and the group’s members are monitoring and preparing for the trial’s eventual verdict, which poses the risk of reigniting the looting that erupted citywide and in major U.S. cities in 2020.

If the trial triggers civil unrest, Jones doubted that the Philadelphia Police Department could protect businesses due to a lack of resources.

“I don’t think they’ll be able to respond any better than the last go-around,” he said on Friday.

A jury has been seated for Derek Chauvin’s trial. Opening statements are expected to begin Monday. Chauvin faces murder and manslaughter charges.

The African-American man died May 25, 2020, after Chauvin, who is white, kneeled on Floyd’s neck while he was handcuffed for nearly nine minutes. A video capturing Floyd’s death set off mass protests across the U.S. against racism and police brutality.

Philadelphia Police Commissioner Danielle Outlaw said that “emotions will run high” regardless of the outcome of the trial’s verdict.

In an emailed statement through a spokesman, Outlaw said “there can be no doubt that the frustration and outrage that many experienced last summer is still felt.” She pledged to protect the rights of protesters and ensure public safety.

“The PPD [Philadelphia Police Department] is committed to protecting the First Amendment rights of individuals to peacefully assemble and protest, but we also want to ensure that any demonstration activity that happens is done in a safe and lawful manner,” Outlaw said.

As of Wednesday, the police department had no specific intelligence about planned protests or civil unrest, but that may change as the verdict date approaches, said Police Sgt. Eric Gripp, a police spokesman, in an email.

The police department continues to gather intelligence and work with other law enforcement agencies, Gripp said.

“In anticipation of any potential civil unrest, the PPD is proactively planning police deployments and gathering intelligence on mass gatherings that may take place in the city,” Gripp said.

Gripp also said the police department will “ensure that there is adequate staffing around the verdict in case civil unrest becomes apparent,” Gripp said. He declined to provide details about personnel deployments.

The Mayor Jim Kenney administration and Outlaw failed to adequately staff police levels during the 2020 protests and civil unrest following Floyd’s death, according to a report from the City Controller’s Office. The lack of sufficient police manpower likely led to police using increased and inappropriate force, including using tear gas on protesters and bystanders, and allowed the looting of businesses to continue for hours, according to the report.

Gripp said the police department has improved its intelligence-gathering capabilities since last year, which will help to ensure the department has the appropriate amount of officers deployed in the right areas.

Brian Abernathy resigned as the city managing director over the city’s heavy-handed response to the Floyd protests. Abernathy oversaw the city’s operational departments in the role and was among Kenney’s top aides.

In an emailed statement, Tumar Alexander, who replaced Abernathy as managing director, said the Kenney administration has acknowledged its shortcomings and failures in response to the Floyd protests and civil unrest last year, and echoed many of Gripp’s comments.

“We’ve also pledged to do better in managing future demonstrations, as we did during the 2020 General Election and the aftermath of the death of Walter Wallace [Jr.],” Alexander said.

The West Philadelphia businesses collaborative is ready to help its members if Chauvin’s trial triggers civil unrest in Philadelphia.

“We have a plan on the shelf,” Jones said.

In the wake of last year’s looting, the group set up a virtual business insurance clinic to help store owners file insurance claims and connect with volunteer lawyers, and established a campaign to lobby city officials to provide assistance and resources.

The group also invested in a text message alert service to immediately contact business owners about potential issues, such as advising them to secure their storefronts. More than 800 businesses have signed up for the service so far.

While most West Philadelphia business owners made repairs and fully reopened after last year’s civil unrest, others have not. Scars remain along those business corridors in the form of boarded up storefronts and cracked windows, Jones said.

Many businesses on the west side of the Schuylkill River are “on the fence” financially due to last year’s looting and negative economic effects from the coronavirus pandemic. Jones said a “large portion of our businesses” would not be able to recover from another bout of civil unrest.

“I’m really worried,” he said, “that any kind of civil unrest could be that push that pushes them off the fence of not being able to reopen.”

How will Philadelphia respond to verdict in trial of Minneapolis cop who killed George Floyd?

How will Philadelphia respond when the eventual verdict is read in the trial for the Minneapolis police officer charged in the death of George Floyd?

As firearm arrests go up, DA's office is not winning those cases, city's top cop says

Police are making more gun arrests in Philadelphia while city prosecutors are losing or dismissing those cases in ever higher numbers, accordi…

Philadelphia officials are mobilizing resources and calling in the National Guard in preparation for the verdict in the Derek Chauvin trial.