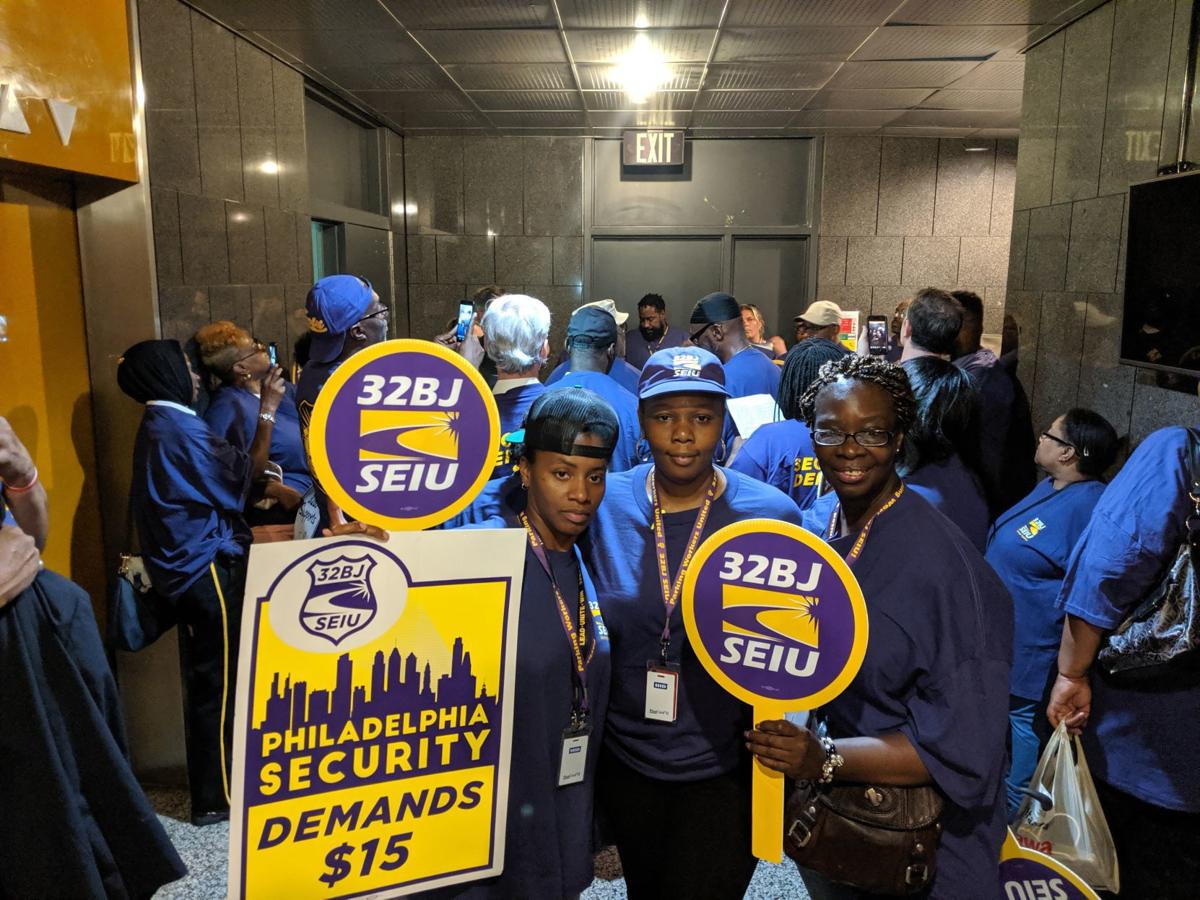 SEIU union members rally inside the first floor of the Municipal Service Building to file a complaint against universities and hospitals, and a contractor for them who the union claims is not paying security workers the prevailing wage on Monday. 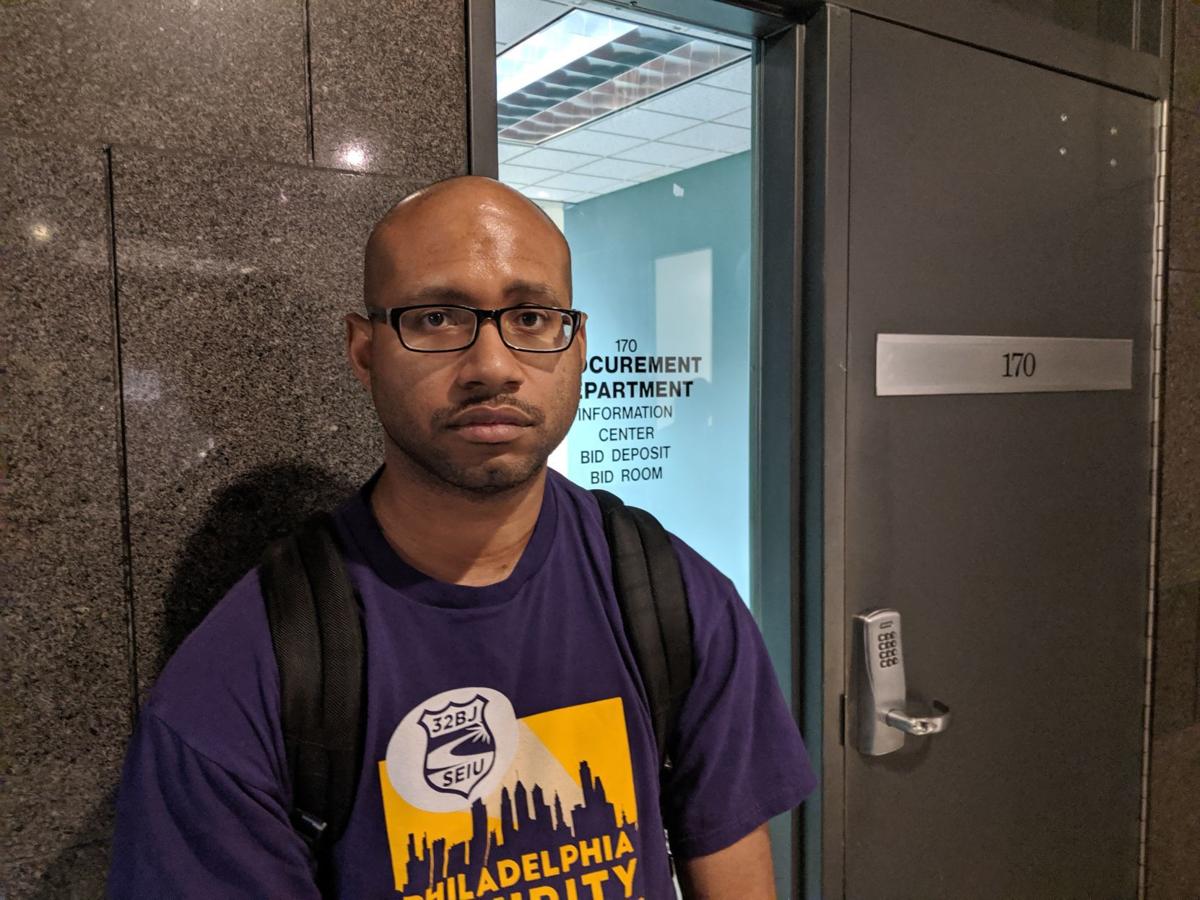 ‘People are greedy. A lot of these institutions don’t pay their own workers the money they should be paying them. It’s a struggle,’ says Charles Logan, a security guard at the Community College of Philadelphia. — Tribune Photo/Michael D'Onofrio 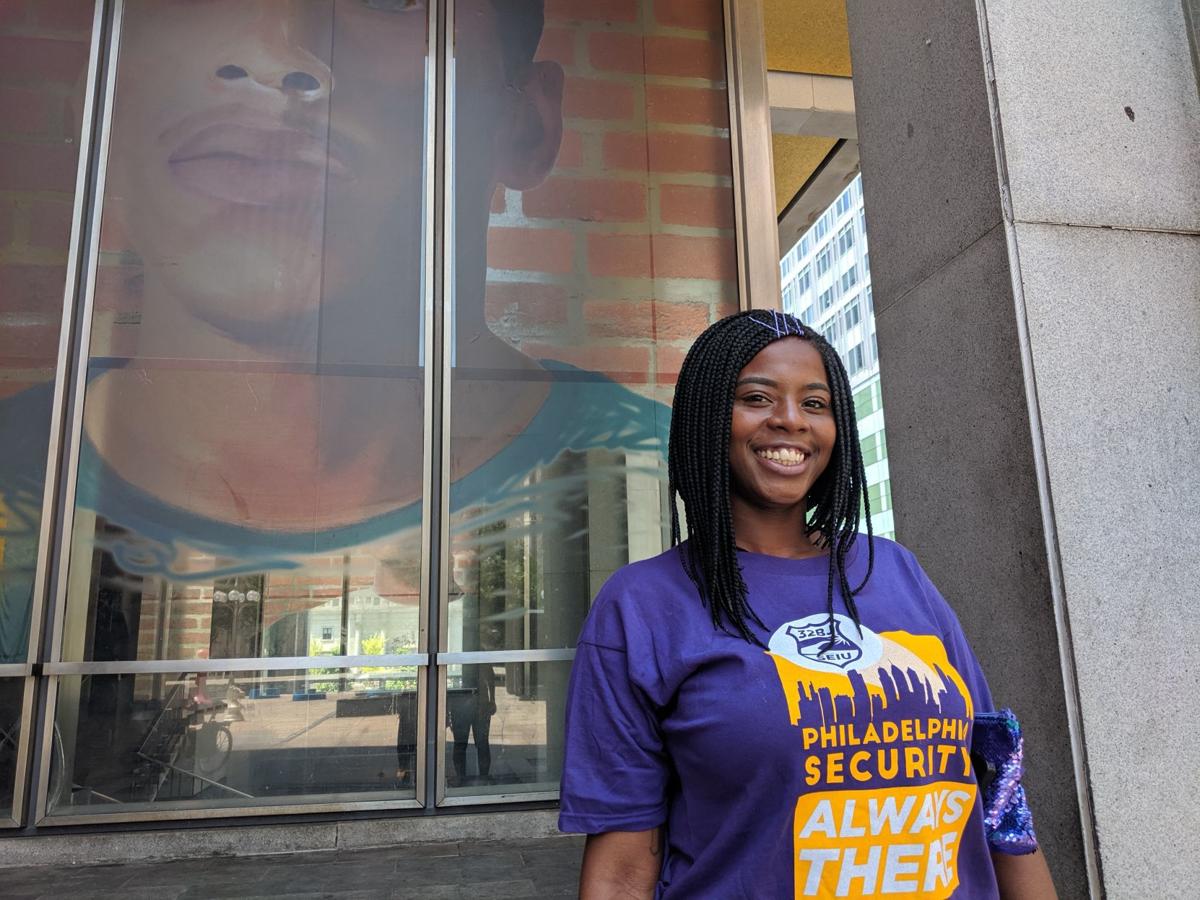 SEIU union members rally inside the first floor of the Municipal Service Building to file a complaint against universities and hospitals, and a contractor for them who the union claims is not paying security workers the prevailing wage on Monday.

‘People are greedy. A lot of these institutions don’t pay their own workers the money they should be paying them. It’s a struggle,’ says Charles Logan, a security guard at the Community College of Philadelphia. — Tribune Photo/Michael D'Onofrio

Charles Logan has spent nine years as a security officer protecting the Community College of Philadelphia.

The 37-year-old works full-time at the college through a contractor who pays him $12.55 an hour, which he said was not enough for him to live on or have long-term financial security.

Logan said he has an idea why CCP and others won’t pay him at least $15 an hour.

On Monday, Logan joined more than two dozen of his fellow security guards and members of the Service Employees International Union 32BJ to file a complaint against those institutions with the city’s Office of Labor Standards inside the Municipal Services Building.

Gabe Morgan, vice president of SEIU 32BJ, called out CCP, Temple University, University of Pennsylvania, Drexel University and others for not paying the prevailing wage rate to the approximately 1,500 security officers who ensure the safety of those campuses.

“These institutions have overseen millions and millions of dollars in public subsidies over the past two years since this law was passed,” he said. “We’re asking simply to follow the law.”

The average security officer at these institutions earns $13 per hour, Morgan said.

The city law requires employers at large residential commercial office and residential buildings who benefit from tax breaks and other financial assistance to pay prevailing wages to workers, which vary by position.

In 2016, the law was expanded to include service workers, including janitors and security guards, at universities, hospitals, and other nonprofit institutions.

The prevailing wage is separate from the minimum wage in the state, which is set at the federally mandated $7.25 an hour. Kenney signed legislation last year to put city workers on track to receive a $15-an-hour minimum wage by 2023.

The prevailing wage for unarmed security officers was $13.48 an hour and $18.81 an hour for armed guards, before benefits were included, said Lauren Cox, a spokeswoman for Kenney’s administration, in an email. She added that the law also applied to contractors used by the institutions.

Representatives of Allied Universal did not respond to calls seeking comment.

Multiple institutions pushed back against the allegations.

Linda Wallace, a spokeswoman for CCP, said in an email that the institution was not covered under the city’s law because it’s a two-year college and not a university.

“Therefore, this mandate does not apply to our college,” she said.

Cox confirmed that CCP was not subject to the prevailing wage law.

Raymond Betzner, a spokesman for Temple, said in an email that the university employees who were subject to the prevailing wage law receive wages that exceed those rates. However, when it came to contracted employees, he believed wages were set by the contractors or through union negotiation.

Betzner said Temple was working with the administration to ensure the university was in compliance with city law.

Ron Ozio, a spokesman for the University of Pennsylvania, said the university “is currently in compliance with the city’s applicable prevailing wage obligations.”

Gail Benner, a spokeswoman for St. Joseph’s University, said in an email that the institution continues to “pay close attention to this and related workplace issues.”

Cox, the Kenney spokeswoman, said the administration was in contact with those institutions in February and June over the city’s prevailing wage law.

“As always, the administration stands with Philadelphia’s workers, and we want to ensure they are being paid fairly,” she said. “We will continue to work with entities receiving financial assistance from the city to bring them into compliance.”

Union member Hadiyyah Edwards, 28, said she worked full-time as a security guard at Hahnemann University Hospital for more than six months before the hospital filed for Chapter 11 bankruptcy protection.

Edwards, who is employed through Allied Universal, will soon transfer to Drexel University but can expect to earn the same $12-an-hour wage as a guard. The low wage, she said, was an impediment to buying a home or having children.

After weeks of protests from medical residents and fellows, the owner of Hahnemann University Hospital announced Wednesday that it will releas…

Rich investors may have let Hahnemann Hospital go bankrupt. Now, they could profit from the land

For the first time in more than a decade, a Pennsylvania legislative chamber has voted to increase the state’s minimum wage — this time from t…