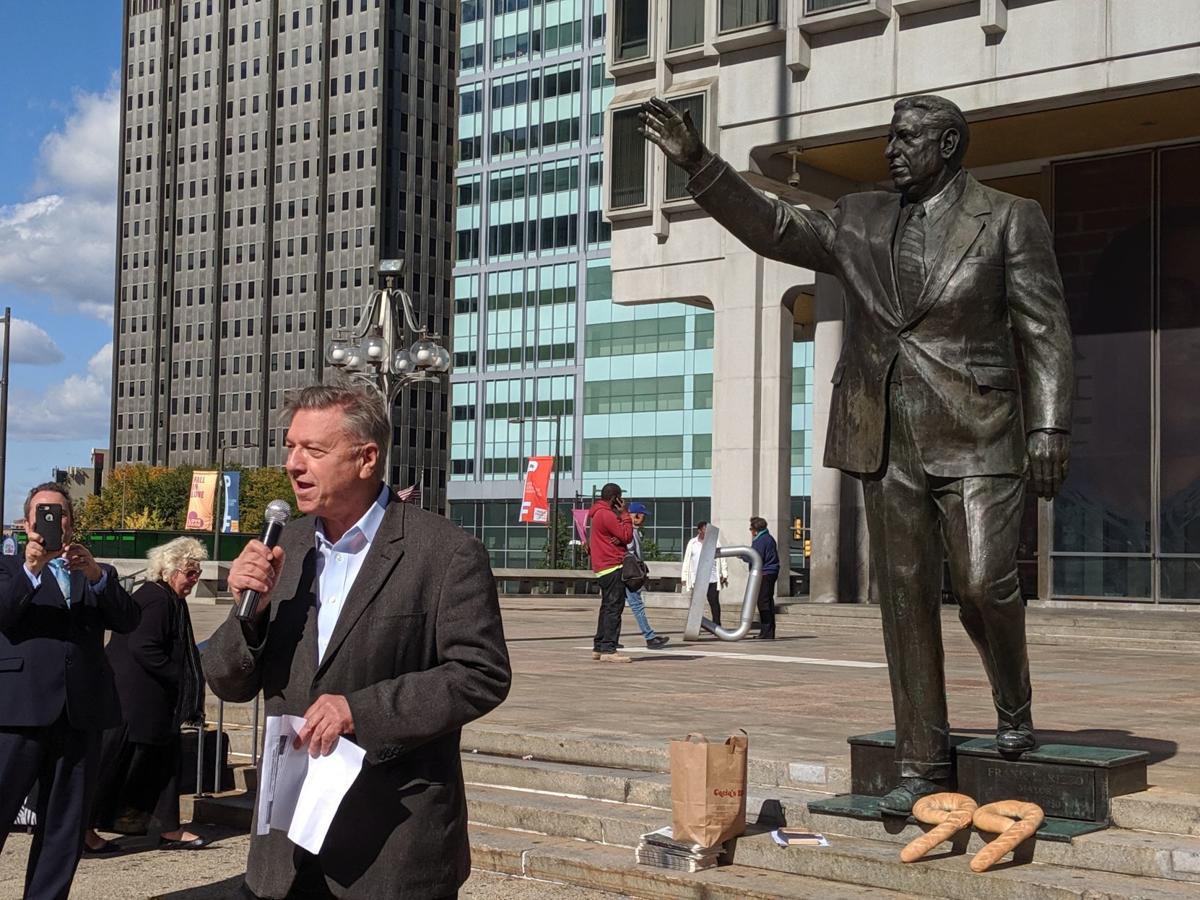 'That’s good news,' says 1210WPHT radio host Dom Giordano on Wednesday upon learning of the Kenney administration’s new schedule for removing the Frank Rizzo statue in Center City. Giordano spoke an event commemorating the 99th birthday of the former mayor, where supporters placed Italian bread loaves in the shape of the number 99 at the based of the statue. — PHILADELPHIA TRIBUNE PHOTO/MICHAEL D'ONOFRIO 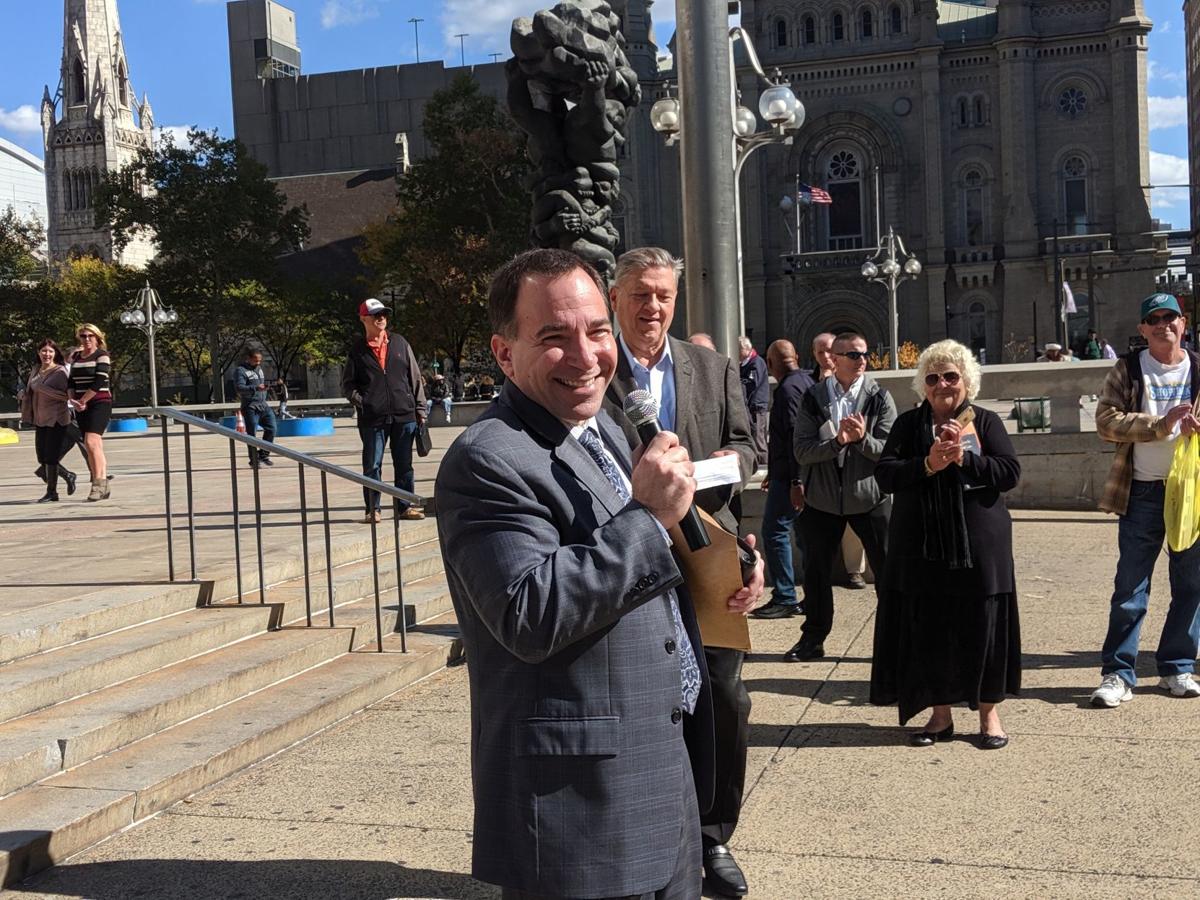 'This statue does not move one inch while I am mayor,' says GOP candidate for mayor Billy Ciancaglini during an event commemorating the 99th birthday of former mayor and police commissioner Frank Rizzo. — PHILADELPHIA TRIBUNE PHOTO/MICHAEL D'ONOFRIO

'That’s good news,' says 1210WPHT radio host Dom Giordano on Wednesday upon learning of the Kenney administration’s new schedule for removing the Frank Rizzo statue in Center City. Giordano spoke an event commemorating the 99th birthday of the former mayor, where supporters placed Italian bread loaves in the shape of the number 99 at the based of the statue. — PHILADELPHIA TRIBUNE PHOTO/MICHAEL D'ONOFRIO

'This statue does not move one inch while I am mayor,' says GOP candidate for mayor Billy Ciancaglini during an event commemorating the 99th birthday of former mayor and police commissioner Frank Rizzo. — PHILADELPHIA TRIBUNE PHOTO/MICHAEL D'ONOFRIO

The Kenney administration has readjusted the timeline for relocating the larger-than-life statue of Frank Rizzo yet again.

The monument to the former Philadelphia Police Commissioner and mayor will stay put on the steps of the Municipal Services Building until at least July 2021, said Kelly Cofrancisco, a spokeswoman for Mayor Jim Kenney’s administration, in an email this week.

Late last year, a Kenney spokesperson said the removal of the bronze statue from its Center City perch was expected to happen after the election but before June 2021.

Deandra Jefferson, a member of the steering committee for Philly for REAL Justice, which spearheaded the calls to remove the statue in 2017, said Rizzo’s time in office was a symbol of Philadelphia’s racist past, heavy-handed police tactics and terror.

“It’s not surprising,” Jefferson said about the delayed timeline. “We see that the man [Kenney] is spineless.”

Jefferson spoke to the Tribune just hours before a handful of Rizzo supporters gathered at the statue to celebrate what would be his 99th birthday if he were still alive.

1210WPHT radio host Dom Giordano, who emceed the birthday celebration, said it was "good news" that the Kenney administration has delayed moving the statue. It means Rizzo's supporters can celebrate his 100th birthday there.

Republican mayoral candidate Billy Ciancaglini, whom Kenney is facing in November, pledged not to move the Rizzo statue if he's elected.

“This statue does not move one inch while I am mayor,” Ciancaglini said.

The Rizzo supporters sang “Happy Birthday” and Kate Smith’s version of “God Bless America.” Smith’s recording of the song was played during Philadelphia Flyers hockey games for decades and a statue was erected for her outside the team’s stadium, both of which were removed after racist songs Smith had recorded in the 1930s came to light this year.

Barbara Zippi, one of the organizers of the Rizzo event, said Italian-American culture was under attack in the city and beyond. Rizzo positively represented Italian-Americans and the city’s history, and she called for maintaining the statue in its currently location.

“When’s it going to stop? This is history,” Zippi said as she stood beside the Rizzo statue, where supporters placed Italian loaves of bread in the shape of the number 99. “It’s got nothing to do with racism.”

The relocation of the 9-foot statue is tied to the $10 million renovation of Thomas Paine Plaza, where it has stood since 1999. City officials were currently reviewing project proposals and finalizing the selection of a design team, Confrancisco said.

“There are no design details to be shared at this time,” Cofrancisco said, referring to the redesign of the plaza.

The Rizzo statue will be removed when construction begins on the plaza renovation, which is expected to be between July and September 2021, Cofrancisco said.

The cost to remove the statue and identify a new location was estimated at more than $100,000, Cofrancisco said. The total relocation costs remains unknown.

City officials have yet to establish a firm date for the statue’s removal or a relocation site.

City officials were now considering “several sites in South Philadelphia” for the relocation of the statue, Cofrancisco said without elaborating. Residents in those areas can expect site visits from city employees and community organizations to determine their level of support for adopting the statue in their neighborhood.

The city will conduct a feasibility study once a site is selected. Officials will then present a proposal for the removal and relocation of the statue to the Philadelphia Art Commission for consideration.

Kenney announced in 2017 that the city would remove the statue. He said at the time that the statue was considered “offensive to people,” particularly to African Americans and people of color who experienced Rizzo’s reign as police commissioner and mayor.

In late 2017, city officials began conducting studies on potential new locations for the statue. They estimated it would take at least six months to complete the studies. That timetable was later adjusted in the summer of 2018, when Kenney decided to push the removal back several years.

Cofrancisco, the mayor’s spokeswoman, declined to comment about whether the removal of the statue would continue as scheduled if Kenney was not re-elected.

“We are not going to speculate on hypothetical situations,” she said.

Missteps on Rizzo's statue may hurt mayor: Opposition to persist in 2019 re-election run

Auction of mayor's stuff will get a surprise sequel

The planned relocation of a statue of the late Philadelphia Mayor Frank Rizzo, a polarizing figure in the city’s history, has been put on hold…

The massive statue of former Police Commissioner and Mayor Frank Rizzo will not move until the first quarter of 2022 — not 2021, as originally…

Workers early Wednesday removed the statue of controversial former Philadelphia Mayor Frank Rizzo, which was recently defaced during a protest…