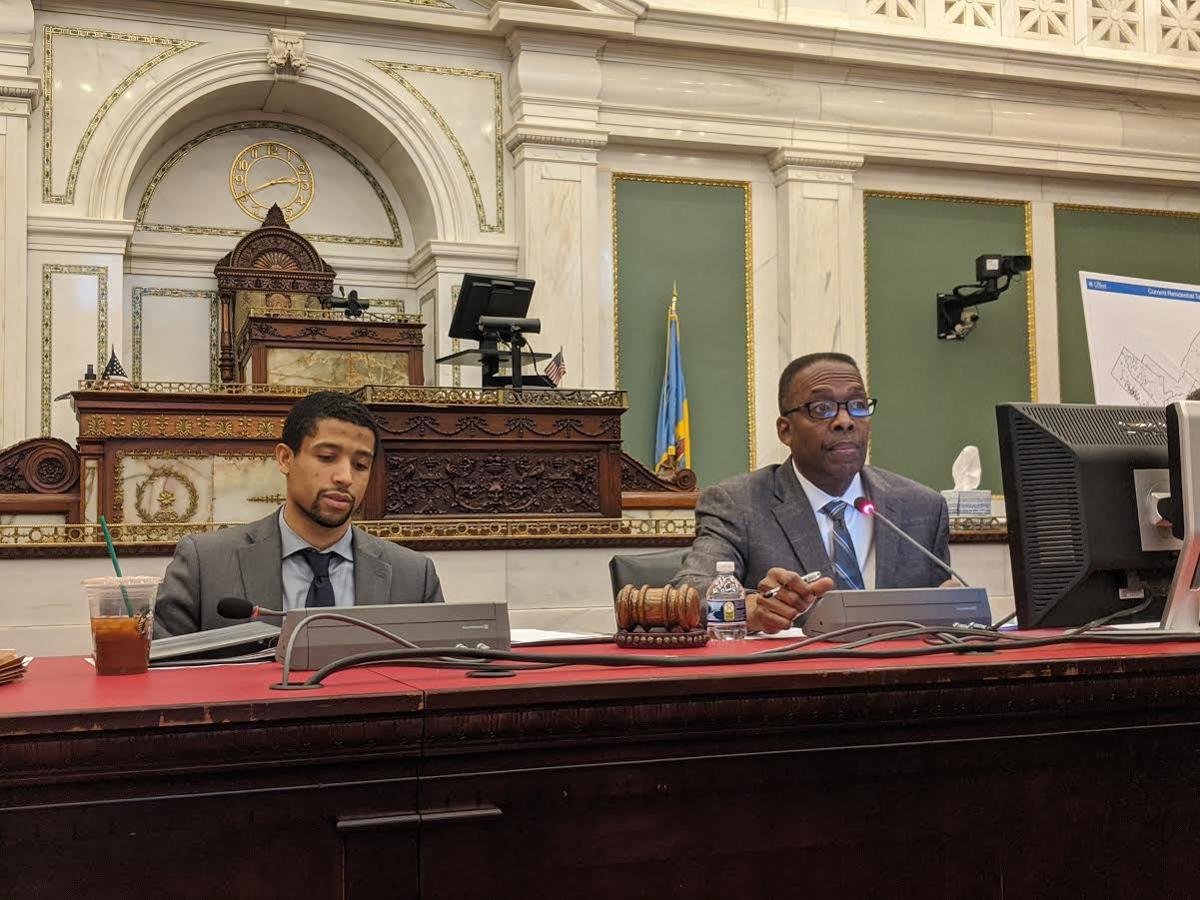 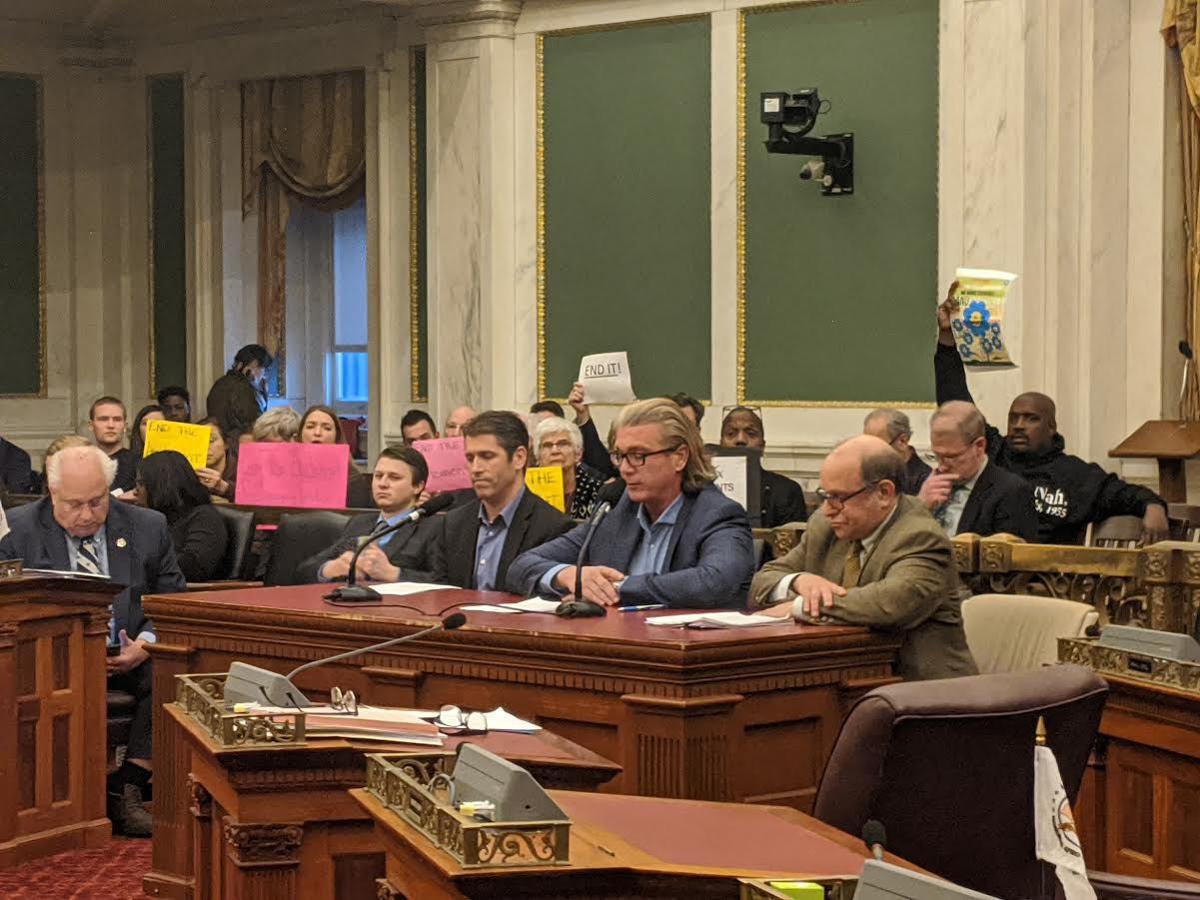 From right to left, David Feldman, leader of the builders’ lobby Development Workshop testified at the hearing along with Gary Jonas and Jim Maransky of the Business Industry Association. -- TRIBUNE PHOTO / MICHAEL D'ONOFRIO

From right to left, David Feldman, leader of the builders’ lobby Development Workshop testified at the hearing along with Gary Jonas and Jim Maransky of the Business Industry Association. -- TRIBUNE PHOTO / MICHAEL D'ONOFRIO

A fast-tracked bill to reform the 10-year tax abatement passed out of a City Council committee on Tuesday and was on track for a final vote before the full governing board by year’s end.

The draft bill would phase out the subsidy incrementally, representing the most significant modifications to the program since 2000.

The proposal would reduce the overall tax break by nearly half and generate an estimated $270 million in city revenue over a decade.

The Committee of the Whole did not vote on changes to the legislation supported by the real estate industry to dilute the bill.

The committee also gave a favorable recommendation to a companion bill to increase the city’s homestead exemption to $50,000 from $45,000 for the approximate 220,000 people in the program.

The committee vote sets the stage for the City Council to give the bills a first reading on Thursday, with a final vote on Dec. 12, the final session of this council’s term. Any bills not approved on that day die, as a new City Council will be sworn in next month.

Council President Darrell Clarke, the main sponsor of the bill and chairman of the committee, called his proposal a “reasonable approach” that will promote equity and allow real estate developers to adjust.

“This [tax abatement] has to change,” said Clarke, whose bill received 14 cosigners.

“This has been a 20-year run and the simple reality is, is that we’re at a point in time where we think we’re approaching a meaningful change that will provide significant revenues to the school district while continuing to stimulate the market,” he added.

James Engler, chief of staff for Mayor Jim Kenney, said the administration supported “revisiting” the tax abatement and phasing it out. He warned of negative long-term impacts and called for changes to Clarke’s proposal.

The proposal would grant property owners the full 100% tax abatement in the first year and then cut it to 90% in the second year, 80% in the third year, 70% in the fourth year, and so on.

The change would go into effect July, with an exemption for commercial properties.

Under the bill, an independent expert would evaluate the impact of the tax abatement on the real estate market for residential and commercial properties, as well as draw up recommendations for future modifications every three years.

Representatives of the real estate industry lobbied hard to water down Clarke’s proposal, warning the changes could trigger a recession and ground current projects to a halt. Whereas affordable housing advocates, school supporters and long-term residents said the bill was too weak and some called for nixing the abatement altogether.

Engler said the draft bill would increase real estate tax revenues by $56 million by 2030, but lead to a loss of more than $15 million by 2040. The proposal was expected to cut construction volume by 28,000 new properties, he said.

“We agree that the abatement is worth revisiting in light of these market changes,” Engler said. “We understand the concerns of residents who view the current abatement structure as unfair.”

The Kenney administration supports phasing out the tax abatement over a period of years and requiring the program to be reevaluated every three years, but with a few caveats, Engler said.

He insisted council members delay the start date of the tax abatement changes until July 2021 over concerns the current timeline could have “significant negative impacts” on development projects in their final planning stages.

Postponing the start date by a year, Engler said, would “allow both the city and developers to better plan for implementation of this plan.”

Rob Dubow, the city’s finance director, warned that increasing the homestead exemption would slash tax revenues by $15.4 million next year, $8.5 million of which the school district would lose out on.

The school district was expected to incur a deficit in fiscal year 2022 “and this bill would exacerbate those deficits,” he said.

City Council increased the homestead exemption to $45,000 from $30,000 over two years, which was done in part to offset increases in property assessments, Dubow said. Last year, council members passed legislation to prevent the homestead increase from reducing school district funding.

The program is for homeowners who use their property as a primary residence and reduces the taxable portion of a property’s assessment by that amount.

“These additional funds would be the sustainable, recurring, predictable revenues on which the district relies in order to make investments in our students, staff, and schools,” Monson said.

However, Monson said, increasing the homestead exemption would result in a loss of $50 million over five years — the annual cost equivalent of 79 teacher salaries.

It would come as the district faces an estimated $4.5 billion backlog for maintenance and repairs.

The building industry forecast disaster if Clarke’s legislation passed and pressed for changes to the bill.

“A change this drastic will have a major effect on the market and could spin the real estate [industry] into a recession,” said Jim Maransky, president of the Building Industry Association of Philadelphia.

David Feldman, leader of the builders’ lobby Development Workshop, said the proposal would stall projects in the pipeline.

The industry supported some changes to the tax abatement program — their own.

Industry leaders pitched City Council amendments to slow the phase-out process. They sought more profits for developers, a delay in the implementation of any changes until July 2021, a longer period of time between  re-evaluations and grandfathering for developers who applied for zoning permits before the effective date of the bill.

City Council rejected them all.

Activists and residents said the tax abatement promoted inequality, and robbed the school district of much needed revenue to improve aging school buildings and remediate lead, asbestos and other harmful materials.

Ron Whitehorne, a member of the racial and economic justice group 215 People’s Alliance, was among the many who called for ending the abatement for both residential and commercial buildings.

“The current bill, while perhaps better than nothing, is woefully inadequate as a means of addressing the problem,” said Whitehorne, a resident of the Lawncrest neighborhood.

Tiffany Green, a South Philadelphia resident, said Clarke’s proposal would continue to give a handout to developers while failing to help long-term residents and those suffering from poverty.

“You’re catering to the newcomers and you’re leaving the low-income [residents] on the back burner,” Green testified at the hearing.

How 30 years of broken promises, false starts led to another Philly asbestos closure

Lynn Johnson began teaching at Philadelphia’s Franklin Learning Center in 1999 — and from the moment she stepped into the aging structure, she…

City Council is corrupt and continues to hurt the schools and residents in Philadelphia. I am sorry I voted for them.....