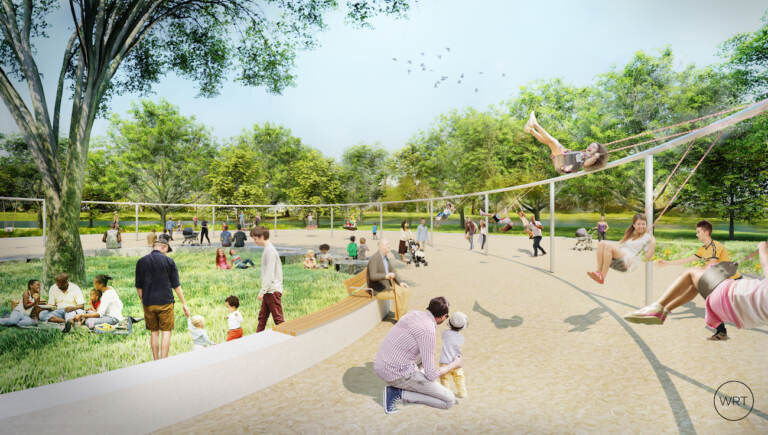 Artist's rendering of the megaswing in the new play space. —City of Philadelphia

Artist’s rendering of the Welcome Center along the Pattison Lagoon. —City of Philadelphia 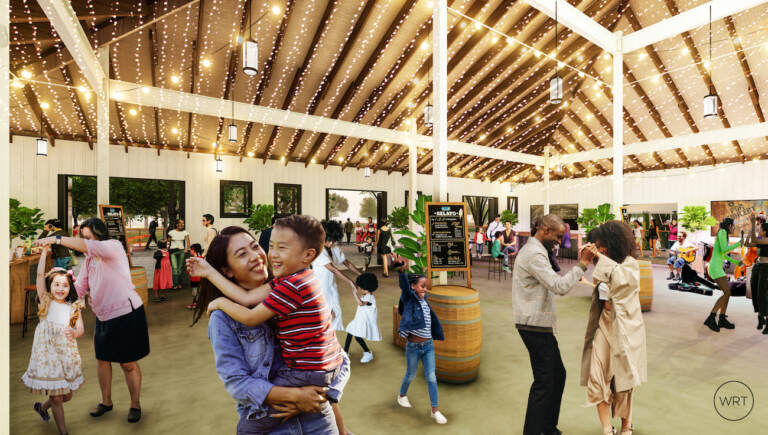 Artist’s rendering of the event space in the stables. —City of Philadelphia 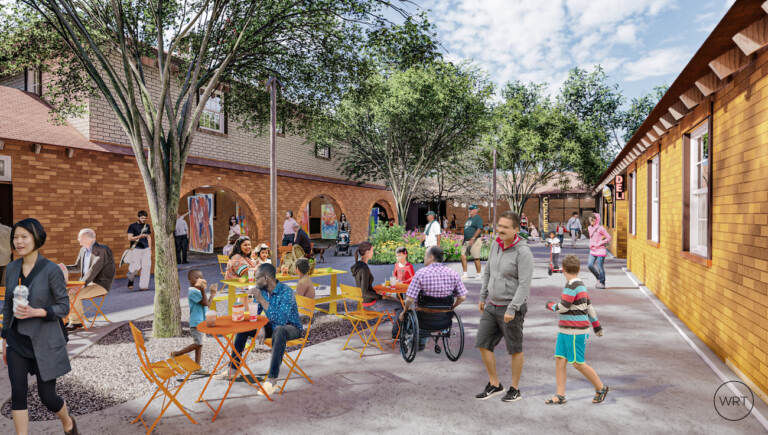 Artist’s rendering of the courtyard between the stables and the guard house. —City of Philadelphia 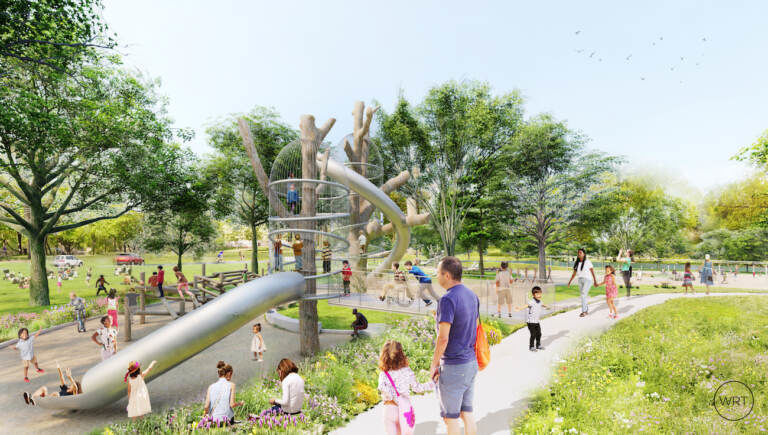 Artist’s rendering of the new place space in FDR Park. —City of Philadelphia

Artist's rendering of the megaswing in the new play space. —City of Philadelphia

Artist’s rendering of the Welcome Center along the Pattison Lagoon. —City of Philadelphia

Artist’s rendering of the event space in the stables. —City of Philadelphia

Artist’s rendering of the courtyard between the stables and the guard house. —City of Philadelphia

Artist’s rendering of the new place space in FDR Park. —City of Philadelphia

A lush 3-acre play space with a waterfront view along with an expansive cafe are coming to South Philadelphia’s Frank Delano Roosevelt Park in 2023.

The Fairmount Park Conservancy, city officials, and the Friends of FDR Park on Wednesday unveiled designs and an official timeline for the ambitious reboot of the sprawling park near the stadiums.

The City of Philadelphia also announced an additional $50 million investment in FDR Park’s rejuvenation plan, to be distributed over the next five years.

The park’s masterplan will total $250 million, with roughly $13 to $15 million going towards the “Gateway Phase,” including the new Welcome Center and playground.

The defunct stables and guardhouse for the Fairmount Park Guard have been closed to the public since the 1980s. Overlooking the Pattison Lagoon and a two minute walk from the park’s entrance on the corner of Broad Street and Pattison Avenue, they will now become the Welcome Center, a resource hub for park goers with bathrooms, a staffed information center with equipment rentals, food and beverage vendors, and a wide range of community gathering spaces.

“This is really exciting for us,” said Allison Schapker of the Fairmount Park Conservancy, “because it’s a chance to show how the incredible historic architecture that is all throughout the city of Philadelphia’s parks can be reused in a way that improves the park experience for users and brings in revenue to sustain and maintain and operate the park into the future.”

The 5,500 square-foot guardhouse will become an office for park staff, friends of FDR Park, and any of the groups that provide programming or get permits in FDR. Visitors will also be able to sign up for permits and for volunteering opportunities.

It is meant to serve as a place for park stakeholders to “share ideas, to convene their work, and begin to work together,” said Schapker, “because right now, some of these people are delivering incredible programming out of their living room.”

The courtyard between the stable and the guardhouse will be an outdoor event space, with rotating food vendors and beer gardens, and steps facing the Pattison Lagoon with a view of the water.

The money for the Welcome Center is coming from multiple directions; the City of Philadelphia’s capital fund, grant money from the state’s Redevelopment Assistance Capital Program, and the Fairmount Park Conservancy.

Playground designed to be accessible for all

For Barbara Capozzi, president of the Friends of FDR Park, the Master Plan will bring even more people in, creating space for communities to build lifelong memories.

“I have early childhood memories from FDR and I’m really happy to see that continuing,” said Capozzi, who used to swim in FDR’s lake as a kid.

Capozzi hopes people will plop down lawn chairs, play music, and just hang out in the courtyard.

“You don’t even need an imagination to imagine [the courtyard] just full of groups, and a place for people to get a map to find out what’s going on,” said Capozzi. “It’s long, long overdue but that’s the perfect spot for it.”

As a grandparent, Capozzi is excited about the park’s new playground, a three-acre “destination playscape,” called the Children’s Play Area.

Currently, FDR has a small playground on a piece of land that is often wet, mainly because most of the park was originally built over marshland.

“It’s the bare minimum,” said Capozzi. “From there we talked to people and learned about what they needed. [The play space] has to be accessible all the time, not just during dry season.”

The new play space, tucked in the curve of the Pattison Lagoon, was designed by the firm WRT around the theme “wander and wonder.” In parts resembling spacious bird cages, and surrounded by shady canopy trees, benches, and a picnic area.

The playground was designed with children and guardians of all abilities in mind, setting a “new standard” for the city’s play spaces, Schapker said.

More traditional playgrounds usually have one swing or one piece of equipment that is designed for someone with a wheelchair, Schapker explained, but, she said, their playground was designed “in a way that the entire play site is accessible to anyone,” regardless of their physical abilities.

The bird house-like climbing gym is one example of the kind of play that kids can expect.

The climbing equipment will have nets on the inside, allowing children to move across a bridge in their wheelchair, transfer from their chair, and use their upper body to move through the birdhouse. At the bottom of the slide there will be room for them to transfer back to their chair.

There will also be a “mega swing set,” a swing set with five to 10 different types of swings; like traditional swings, bucket swings, and seesaw swings.

“So it’s thinking about variety and options rather than offering the same type of experience for everybody,” said Schapker.

The $500,000 play area was funded by the Pennsylvania Department of Conservation and Natural Resources and the Fairmount Park Conservancy.

Fairmount Park Conservancy, Friends of FDR Park, and WRT, based in Philadelphia, have been gathering community input on the project since it’s initiation. Schapker said the plan came in direct response to many of the needs brought up by FDR park community members.

They hope to continue to gather feedback on uses for the new spaces.

“The capital project, the stuff, is like the hardware, it’s like the iPhone,” said Schapker, “It’s the programming and the people that actually make it interesting and relevant. So we want to know who should be involved, how people would like to use it, who else we should be talking to.”

Community members can fill out forms on myphillypark.org, or attend community engagement events that will have QR codes leading to an input form. Schapker also encouraged Philadelphians to speak with park staff about their ideas for the park.

Now that the designs are complete, the two projects will break ground in summer 2022. The playground is projected to finish in the summer of 2023, with the Welcome Center following in the fall.

If there are no more slowdowns, that is. Across industries, the pandemic has created labor shortages and slower supply chains.

“We’re going to have to be very aggressive to make sure that it happens,” Capozzi said. “2023 is very realistic, if we don’t have any hiccups relating to COVID.”