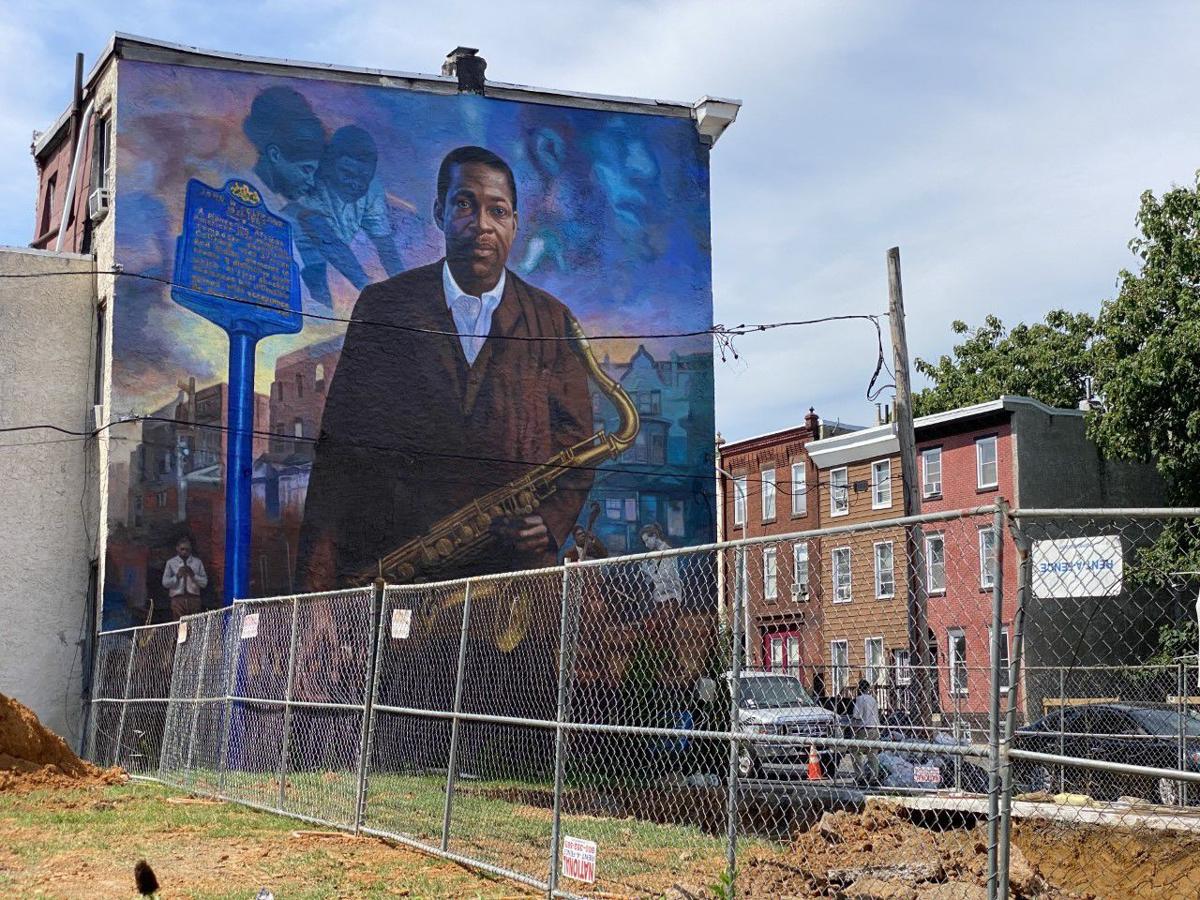 This mural of jazz saxophonist John Coltrane at 29th and Diamond streets will be blocked due to construction the site. — Tribune Photo/Abdul R. Sulayman 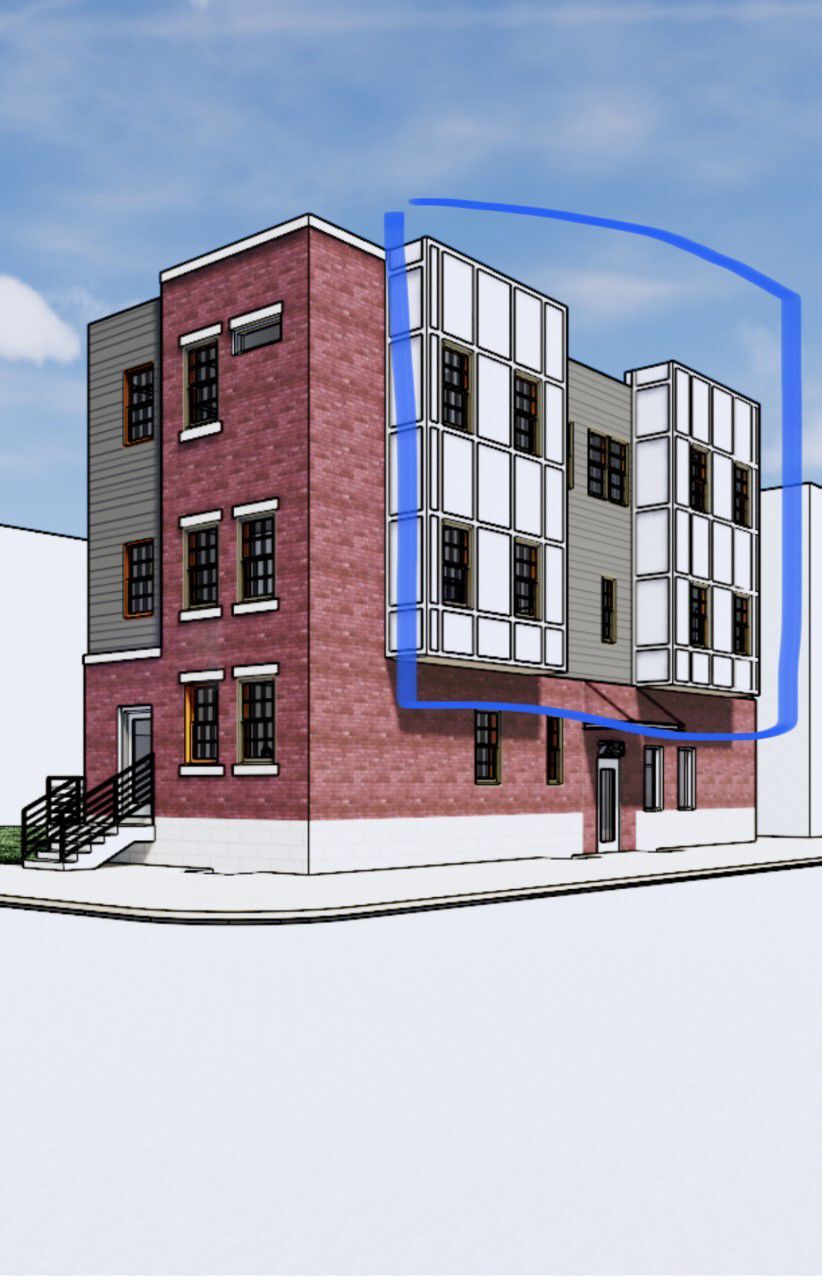 A rendering of the future three-story development at 2848 Diamond St., which will partially obstruct an adjacent mural of jazz icon John Coltrane. — Submitted

This mural of jazz saxophonist John Coltrane at 29th and Diamond streets will be blocked due to construction the site. — Tribune Photo/Abdul R. Sulayman

A rendering of the future three-story development at 2848 Diamond St., which will partially obstruct an adjacent mural of jazz icon John Coltrane. — Submitted

A second mural of John Coltrane in the Strawberry Mansion neighborhood will be lost to new development.

But the developer has already offered $25,000 to recreate it on the side of his building or somewhere else in the city.

“At the end of the day, I’m here to please the people,” said Logan Kramer, president of Design Pro Development and co-owner of the property under development. “We’re not trying to be some dirtbag developers and just block the mural.”

The “Why We Love Coltrane” mural, painted by artist Ernel Martinez, in 2017 is on the side of a rowhouse near the intersection of 29th and Diamond streets. The artwork shows Coltrane holding his saxophone. Painted behind him is a historical marker and his Strawberry Mansion rowhouse, where he beat a heroin addiction and composed the album “Giant Steps.”

The rowhouse stands next to a vacant lot where Design Pro is building a small multi-family building.

The building will cut the view of the mural in half — news that drew the ire of some in the community.

Faye Anderson, an activist and founder of the history blog All That Philly Jazz, said the mural “means too much” to be obscured.

Anderson called for the removal of the current mural altogether rather than allowing it to be partially blocked.

“This is an international cultural icon,” she said. “And so the idea that Coltrane would be partially blocked, to me, is so offensive.”

Kramer stressed on Monday that the mural would be only partially obscured.

A 10-foot rear yard will leave the left side of the artwork visible, he said, and an alley and see-through fence will separate the development from the rowhouse with the mural on it.

“We’re doing everything we can possibly do to not obstruct the mural,” Kramer said.

Kramer said he was very invested in the community, noting he owned upwards of 100 properties in Strawberry Mansion, and his partners were “locally-driven developers.”

But if the community wants to recreate the mural elsewhere, Kramer is willing to pay $25,000 to help the cause, he said in an email to Anderson and officials, including City Council President Darrell Clarke, state Rep. Donna Bullock, state Sen. Sharif Street, and Mural Arts Philadelphia executive director Jane Golden.

Golden said she was thrilled and grateful that Kramer stepped up to help fund a new mural, noting “that does not always happen.”

“This is an optimum set of circumstances where developers actually understand what they’re tearing down or building in front of is something that is important to the city,” Golden said.

Mural Arts has funded the creation of more than 4,000 murals across the city, 60% of which feature African Americans. The cost of a new mural averages between $25,000 and $35,000, but can run into the hundreds of thousands of dollars.

Murals are lost to development around half a dozen times a year.

A previous mural of Coltrane on a wall near Diamond and 33rd streets, created by John Lewis in 2002, stood until 2014 when a developer, the Pennrose Company, demolished the building it was on. Mural Arts worked on that mural with Mary Lyerly Alexander, known as Coltrane’s “Cousin Mary,” who died last year.

Mural Arts workers scout locations for new artwork with the goal of having a mural standing for at least five years, but the city’s building boom in recent years has complicated that, Golden said.

“It’s very hard. There’s so much development now in the city,” Golden said.

She added: “We wouldn’t want to stand in the way of economic development — we understand that — but we feel really strongly that murals are civic assets and treasures.”

Golden was surprised development came so soon to the intersection of 29th and Diamond streets; she had believed the lot was not slated for development for years.

While Anderson applauded Kramer for committing to fund a new mural, she said the community would have fought to ensure the mural was not lost.

“There was no way that the community was going to acquiesce to that mural being partially blocked,” Anderson said. “It means too much.”

Anderson suggested the Strawberry Mansion or Yorktown neighborhoods, both of which Coltrane lived in, as locations for a new mural.

A future Coltrane mural could combine other elements of the city’s jazz heritage, Golden suggested. Mural Arts could potentially fast-track a new mural to be completed by mid-2021, she added.

“What can we do that’s different?” asked Golden. “Jazz is such an important part of our history as a city. And how do we talk about jazz and Coltrane and what it all means?”

Bill Green, a 54-year-old resident who lives nearby at Diamond and Newkirk streets, was walking past the mural on Monday afternoon as temperatures reached into the 90s.

While he said the mural was beautiful and among the improvements to come to the neighborhood in recent years, he was upbeat about the housing development.

“I’d rather see a house there than a lot,” he said.

Green said he hopes a new Coltrane mural will be put close by.

“That’s our mural, so put it where we can see,” Green said. “Don’t put it in West Philly when you know it was down here in North Philly.”

The dilapidated rowhome where John Coltrane lived in Philly just landed a big opportunity for preservation.