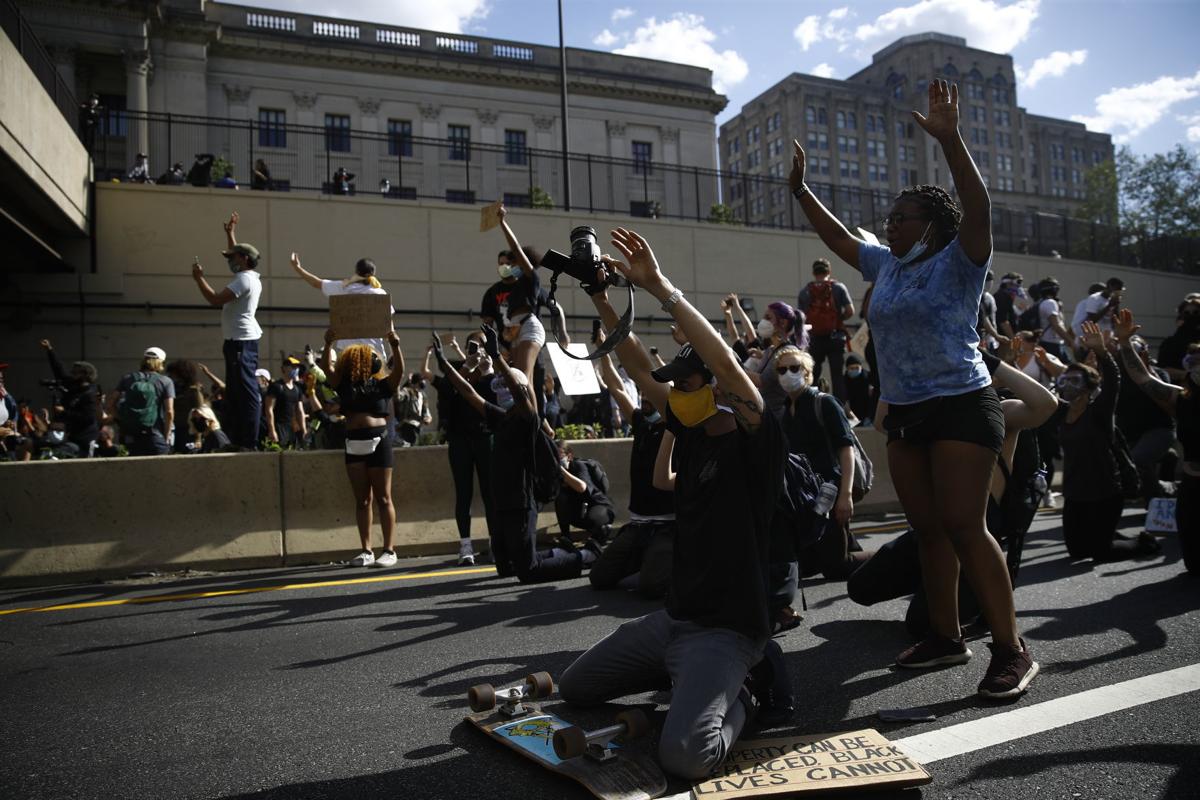 Protesters gather on Interstate 676 during a march calling for justice over the death of George Floyd in Philadelphia on Monday. — AP Photo/Matt Rourke 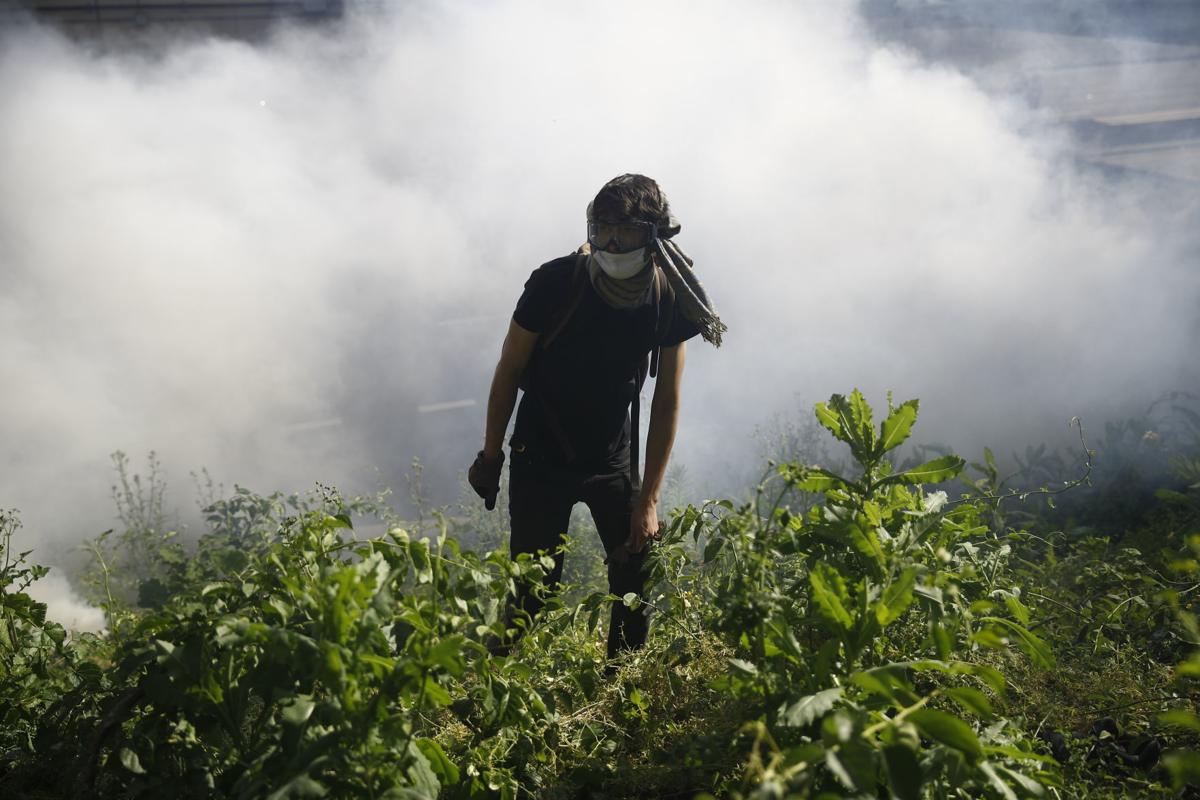 A protester walks near smoke after tear gas was dispersed during a march calling for justice over the death of George Floyd in Philadelphia on Monday. — AP PHOTO/MATT ROURKE) 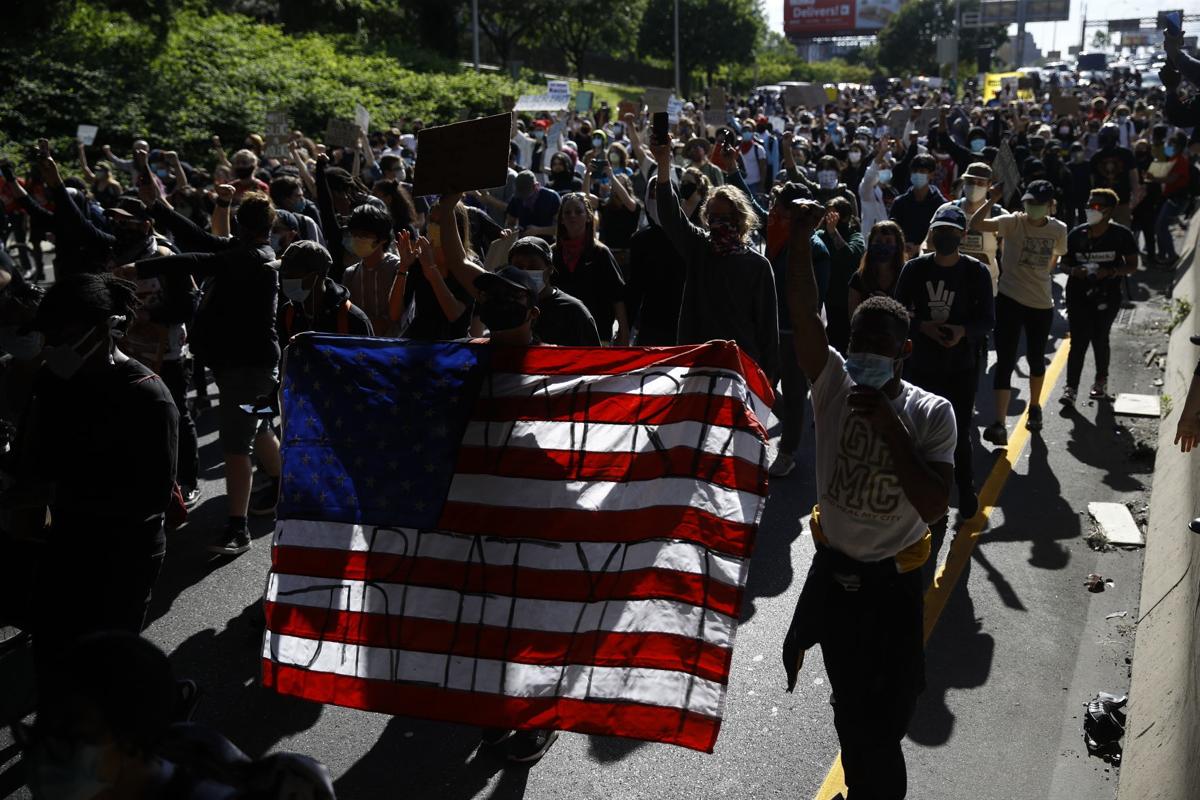 Protesters gather on Interstate 676 during a march calling for justice over the death of George Floyd in Philadelphia on Monday. — AP Photo/Matt Rourke

A protester walks near smoke after tear gas was dispersed during a march calling for justice over the death of George Floyd in Philadelphia on Monday. — AP PHOTO/MATT ROURKE)

Hundreds of people protesting the police treatment of Black people spilled onto an interstate highway in the heart of Philadelphia on Monday afternoon just before a curfew took effect, leading law enforcement to fire nonlethal bullets and tear gas and halting traffic during the evening rush hour.

The crowds on Interstate 676 also led to the closure of the Benjamin Franklin Bridge, the main link from downtown Philadelphia to New Jersey suburbs. Some climbed a steep embankment and scaled a fence as police acted.

More than two dozen were arrested as a few hundred other protesters moved to block the Benjamin Franklin Parkway, a grand thoroughfare leading from downtown to the city’s imposing art museum.

The confrontation came after the National Guard stationed vehicles outside City Hall and other downtown buildings, officials curtailed public transit, and city leaders put a curfew in effect for a third day Monday after a weekend of destruction that led to over 400 arrests.

A few hundred protesters were forced down Benjamin Franklin Parkway toward City Hall after the interstate demonstration. Many went to the Police Department headquarters known as the Round House on Arch Street, where a line of National Guard members and police officers stood watch on the stairs.

Shortly before 7 p.m., a little more than half decided to take a knee as a sign to protesters. Many cheered and video taped the officers on one knee at the top of the stairs. Afterward, many of the protesters left, but others unsure of what to do, slowly milled about outside the station.

The Monday curfew was 6 p.m., the same as the day before and two hours earlier than Saturday. The city closed most services and business in the Center City, including a noon shutdown of all downtown bus, trolley and subway stops.

Protesters — like others across the country, inspired by the death last week of George Floyd, a black man who was pinned by a Minneapolis officer who put his knee on the handcuffed man’s neck — chanted “Let him go” after an arrest that was captured in videos posted online as relations between a crowd and police near Philadelphia’s convention center grew tense.

On a call with governors Monday before the confrontation on the interstate, President Donald Trump singled out Philadelphia, where as of Monday morning destruction had been on par with that in some other major cities.

“Philadelphia is a mess. Philadelphia, what happened there is horrible. And that was on television. They’re breaking into stores and nobody showed up to even stop them,” Trump said.

Mayor Jim Kenney responded, saying Trump has not been helpful during the protests. Kenney also said he wasn’t prepared to speculate on whether the protests and their aftermath would change the city’s plan to ease restrictions on businesses and other stay-at-home-orders by entering into the state’s “yellow phase” of coronavirus recovery Friday.

Protests also erupted across the state, including in Lancaster, Erie, Reading, Chambersburg and Bethlehem.

Lancaster officials said Monday that they had evidence white nationalists had instigated the violence at a weekend rally there that had a few instances of bottles of cayenne pepper and other projectiles thrown at police.

McSwain’s office is investigating whether any crimes would fall under his federal jurisdiction, he and U.S. Sen. Pat Toomey, a Republican, said at a news conference.

“We are looking into who are the real agitators,” McSwain said.

Police in Erie charged eight people after attacks on police and attempts to set fires at three downtown businesses Saturday.

In Philadelphia, a fire late Sunday that appeared to have started at a Rent-A-Center in the Kensington neighborhood caused parts of several stores and apartment buildings to collapse, Fire Commissioner Adam Thiel said.

Nearly two dozen police officers were injured over two nights, including one who was hit by a fleeing vehicle and is hospitalized with broken ribs and a broken arm, said John McNesby, president of a Philadelphia police union.

Police Commissioner Danielle Outlaw said police made 429 arrests from Saturday to early Monday, a number expected to grow. The city normally gets about 3,000 calls for police service, Kenney said, but got about 18,000 on Sunday.

“We have been sitting on a powder keg for some time and it has burst,” Outlaw said.