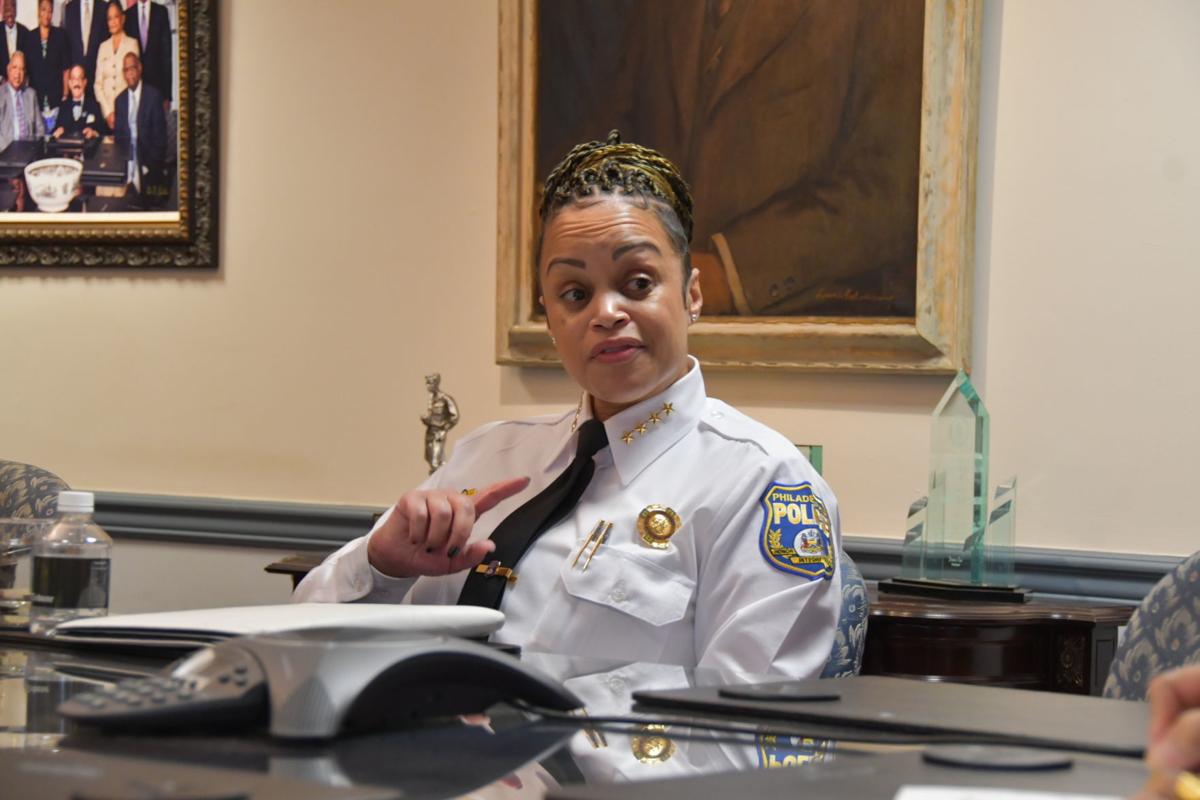 Philadelphia Police Commissioner Danielle Outlaw says social media and immediately reacting to perceived disrespect are among the causes of the rise in homicides overall and among young people. —TRIBUNE PHOTO/ABDUL R. SULAYMAN 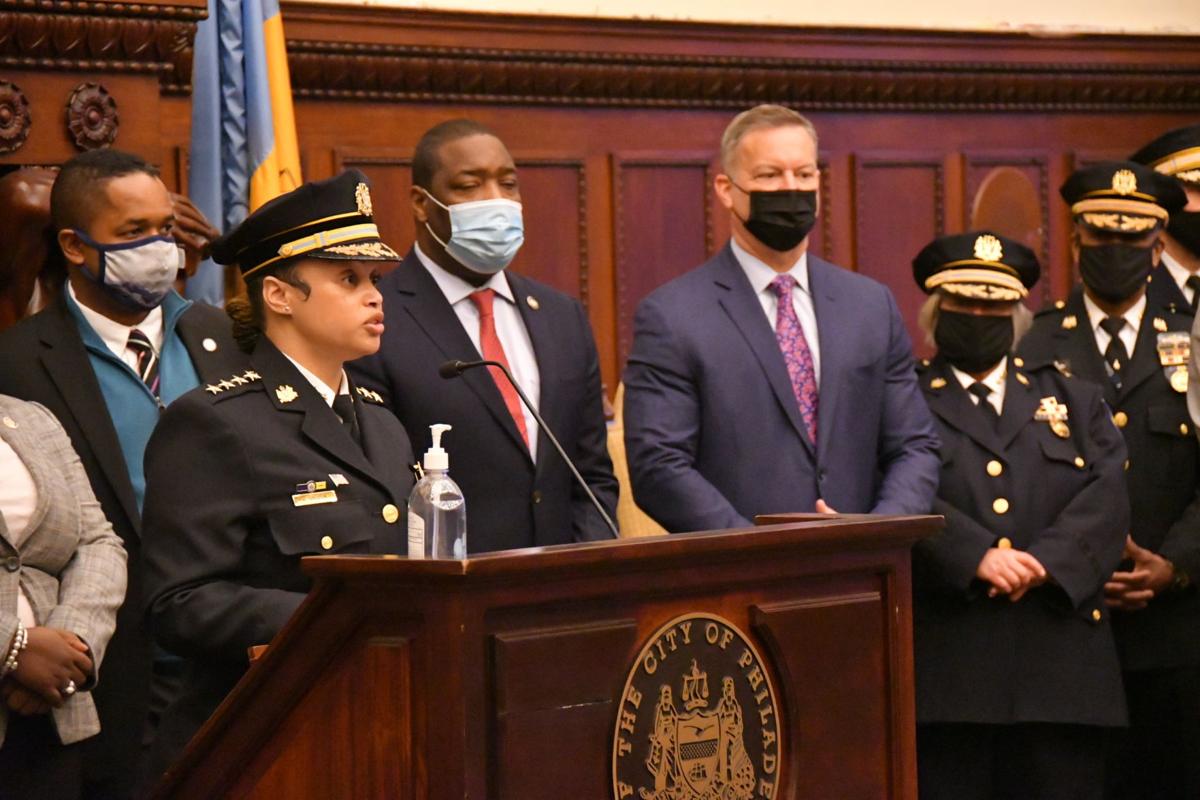 Philadelphia Police Commissioner Danielle Outlaw says social media and immediately reacting to perceived disrespect are among the causes of the rise in homicides overall and among young people. —TRIBUNE PHOTO/ABDUL R. SULAYMAN

Gun violence perpetrators are getting younger and younger in Philadelphia.

As the city surpasses its record number of homicides, the amount of violence involving teens and young adults is growing.

According to the Philadelphia Police Crime Mapper, there have been 506 homicides in Philadelphia this year, as of Sunday night.

Not only is there a notable percentage of young victims being killed, but there is also a rise in the number of adolescent shooters.

Police Commissioner Danielle Outlaw attributes social media and immediately reacting to perceived disrespect before analyzing a situation as one of the causes for the rise in homicides overall and among young people.

"One of the main drivers that we saw behind 2020 violence, and even now today was driven by social media, social media beef," Outlaw said. "And even further behind that, we see more and more young people behind the social media abuse that's driving the violence that we're seeing."

She said the pandemic made it challenging for the Philadelphia Police Department to connect in schools and touch-point areas. Just a month into her tenure as police commissioner, the country was shut down. As a result, she never had an opportunity to meet people in traditional ways. In addition, it was tough for officers to identify targeted individuals because people were not as accessible because of COVID-19.

Social media beef doesn't fester long before retaliation takes place. A post hits the internet quickly, and often before police can react to it, violence is carried out, Outlaw said.

"We're constantly adapting in policing. But since we know social media is now, it's so prevalent," Outlaw said. "We had to assign additional analysts and provide training in our divisions not just to some of our detectives, but our intelligence analysts who then report to some people in the gun violence task force."

Outlaw and her PPD staff are committed to hearing from youth and helping develop ways to decrease the violence plaguing Philadelphia.

She attributes some of the rises in children solving disputes with guns to the development of the brain. Unfortunately, according to research from "Mental Health Daily," the human brain is not fully developed until the age of 25. As a result, many teens and young adults are not adequately equipped with critical thinking or conflict mediation skills.

And with the influx of availability of guns, more people's first instinct is to get a gun and shoot.

"I would love for someone to look at social media itself and see how that's impacting and shaping the decisions that we make," Outlaw said.

"Because there's so many guns available. A lot of what we've seen would have back in the day, just been a fight, right? But because now 'I'm embarrassed and posted on social media, I have to clear my name.' And it's so easy to grab a gun nowadays. So now I'm going to shoot you to let you know that this is it," she continued.

Sandhyaa S. Iyengar is a physician with the Division of Developmental and Behavioral Pediatrics at Children's Hospital of Philadelphia.

"It's very important to recognize that children, specifically in the adolescent period, between like 10 years old up until 20, or so, like you were saying earlier, their brains are still developing," Iyengar said. "So in adolescence, it is important to realize that how the brain develops is from the back to the front. And so the last area of the brain to develop is the prefrontal cortex, which is the area that's really important for reasoning and impulse control."

"What we call 'ACES' or adverse childhood experiences that actually have an impact on every system of the body, all the way from your endocrine and your hormone systems to the way the brain develops," Iyengar said. "We know exposure to these events are so impactful. But what we do is build a strong community around a child. So yes, afterward, we can lessen the harms and prevent future risks through problems that target specific behaviors and building skills."

Although social media is a cause in the escalation of violent crime in the city, Outlaw made it clear it's not the only reason more and more people are getting killed. Since 2015 there has been a steady increase in homicides year over year. Other factors just as prevalent are domestic violence, narcotics use, and sales also contributed. The pandemic also bought a lack of access to resources to the surface level in a way it had not been exposed.

"It's all over the country," Outlaw said. "So, you know, did the pandemic and people being pushed indoors increase the numbers, especially in places like here, where, again, all the inequities have been exacerbated, or lack access to housing or education, all these other things, the inability to self regulate the lack of access to mental health, support or resources, you know, all these things."